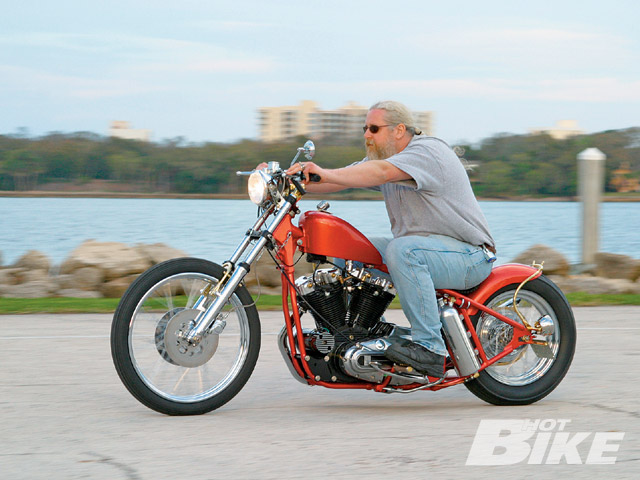 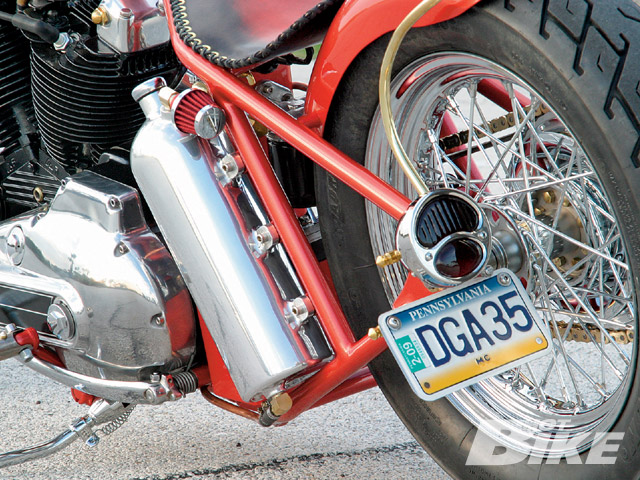 Dave used an old fire extinguisher for the oil bag, which looks like some kind of a nitrous booster! 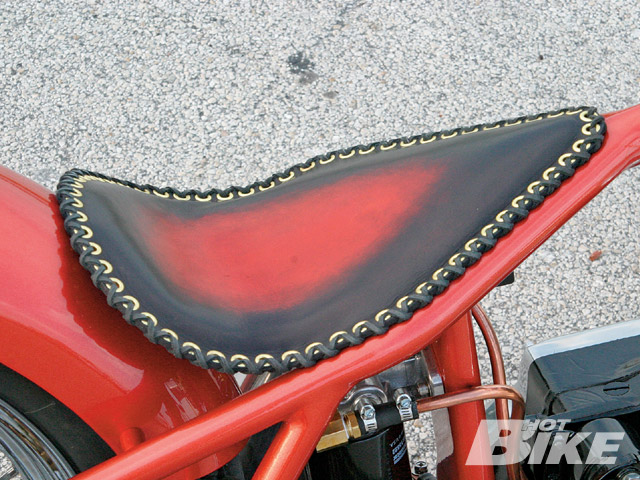 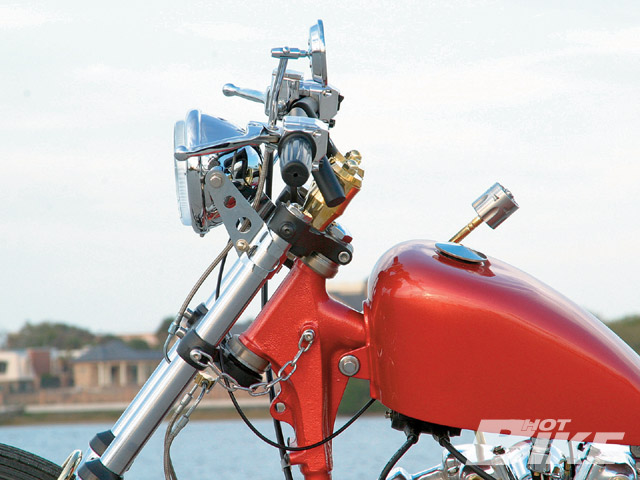 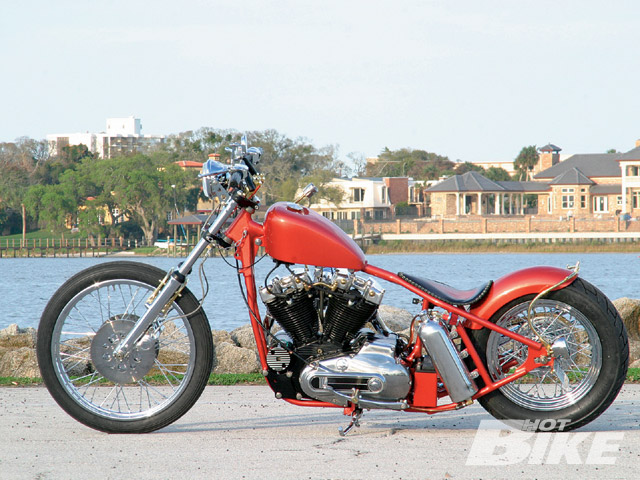 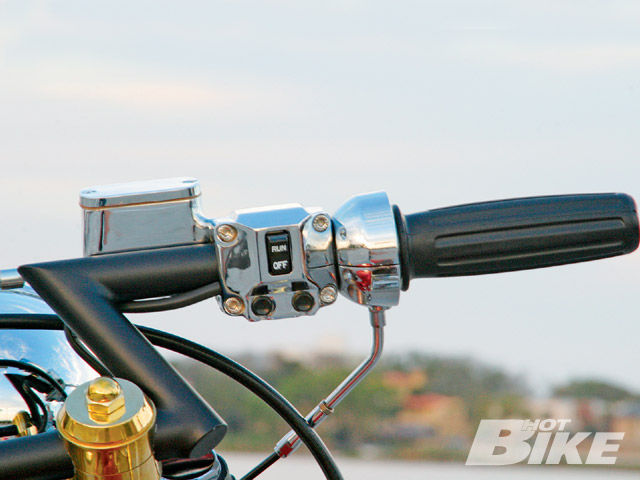 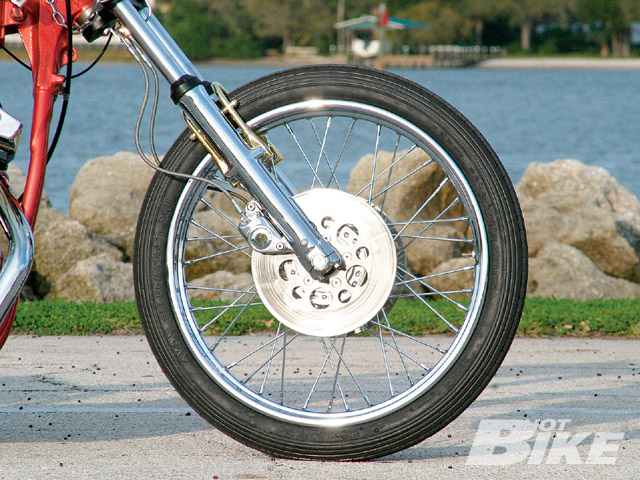 Dave says the dual-disc frontend adds quite a lot of stopping power and offsets the mechanical rear drum brake. 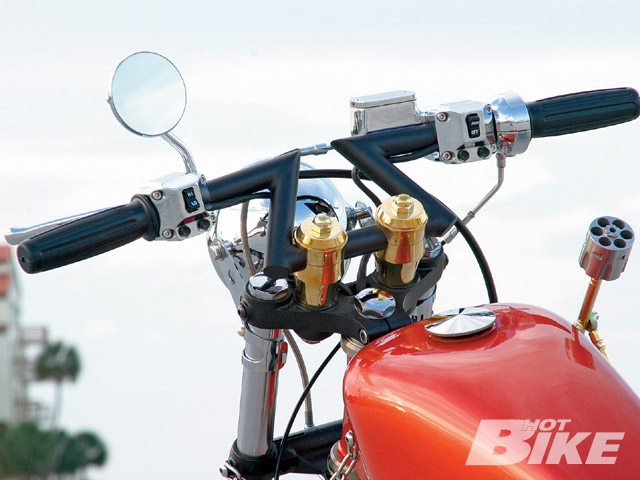 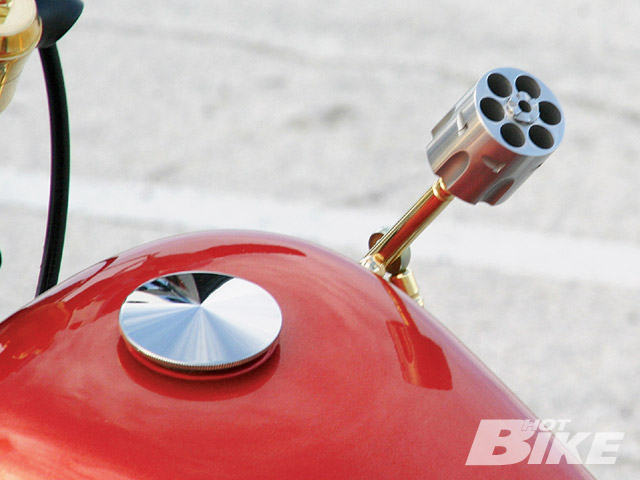 Daytona Beach Bike Week produces some pretty killer customs from all over the East Coast and beyond, and it’s also the first big bike rally of the year. For us left coast guys, Florida’s annual rally is an opportunity for us to take advantage of seeing what the folks on the east have been doing since the previous year. At the 2008 rally, we found this killer Ironhead Sporty built by Dave Mizur from Mizur Customs in Slatington, PA, just cruising down Main Street. We pulled him over, chatted for a few minutes, and next thing you know we were doing a full feature shoot with Dave’s custom Sporty. It turns out Dave’s Ironhead won best bike in the Sportster Custom Class at the 36th Annual Rat’s Hole Show that same year. Can we pick ’em or what? As for the bike’s back-story, Dave will tell you that part…

I bought the 1974 H-D Sportster XLH bike from a local guy. It was rough, but mostly complete with low miles and numbers matching the cases, chassis and title. So up on the choppin’ block it went

The first order of business was to thoroughly go through the engine and trans. I found that someone previously took the engine 30 over, but the cylinder walls were scarred and the rings had never properly seated, so I replaced them with OE cylinders, KB pistons, wrist pins, clips, and Hastings rings. The rest of the motor checked out, so back together it went with new gaskets and seals. Although I put the engine back into stock configuration, I upgraded the weak areas. Upgrades include an S&S; Super E carb, a HI-4 ignition, and Cycle Electrics voltage regulator.

Next, I went through the four-speed transmission. After a complete disassembly, it was obvious from the internals that it was a very low mileage bike to start with, so I tweaked some clearances and back together it went.

Now, with the stock ’74 frame, I added 2 inches to the downtubes (which adds just a couple of degrees to the neck rake), and hacked off the rear section to make room for the Paughco weld-on hardtail. I added the two vertical supports in the rear section to give the bike a bit of a drag race flavor. It also provided the ideal place to mount the oil tank made from an aluminum fire extinguisher.

Then I moved on to cleaning up the factory welds, and smoothing the frame. I didn’t go crazy molding the frame, just finessed it a bit. I like the look of the factory cast frame components, and wanted it to be apparent that it is a factory chassis.

After molding, I treated the chassis to three coats of urethane epoxy primer, a medium fill primer that smoothed the chassis until it looked like glass. Then Jeff Gross laid down the House of Kolor Cinder Red metallic over a medium metallic silver base.

By now you probably figured out that I’m not a flashy guy. I’m far more interested in getting the lines of the bike right than in paint and graphics and shiny stuff. As a result the bike has very minimal chrome plating, instead I opted for brass and nickel plating. Check out the upper motor mount, neck bearing cups, axle spacers, footpegs, brake linkage, and most of the fasteners used throughout the bike. The rest is stainless steel, like the 44 Magnum shift knob, chain fork stops, and a polished stainless Model A taillight from friends at MAD Originals.

There is a solid month’s worth of work in hand forming, detail machining and polishing the brass components alone. This includes the handlebar risers, front fork brace, shifter linkage, and rear fender supports. And no, they are NOT brass plated. They are all solid brass.

The seat was also done completely in house, and custom leatherwork is a specialty of mine. I started with hand forming the seat pan, and welding mounting studs to the bottom. After shaping the pan, it was covered in closed cell foam, contoured to the desired shape, and covered in premium vegetable tanned leather.I dyed both sides of the seat identical, starting with seven coats of red base until it matched the paintwork, followed by multiple coats of black blended in from the edges. To trim the seat out, I hand set brass grommets around the outer edge, and laced it with black latigo.

Assembly time was tight, and we almost did not make it down to Daytona Bike Week in time. I was lacing the seat in the back of the van, on the way down to Florida. I finished it as we got into Jacksonville, FL, no joke!

All the extra effort paid off with a first place win in Sportster Custom class at the 36th Annual Rats Hole Custom Bike Show. My favorite part of Daytona Bike Week is the riding, and this Ironhead is a dream to ride. It’s low, lightweight, and handles perfect. Being from the Northeast, we’re accustomed to frost heaves and pothole-riddled roads, courtesy of winter. Man, there ain’t nothing like riding a rigid on those Florida back roads, smooth as glass!

Before… Photo: Jeff G. Holt Trust me. I know I am no different than you when it comes to a […]

Don’t Call It A Comeback