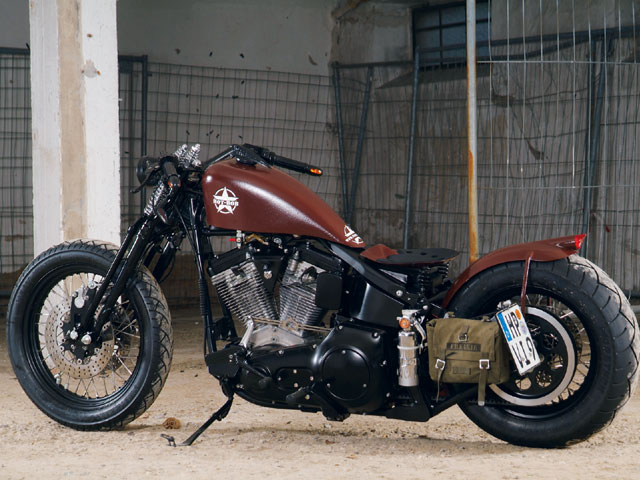 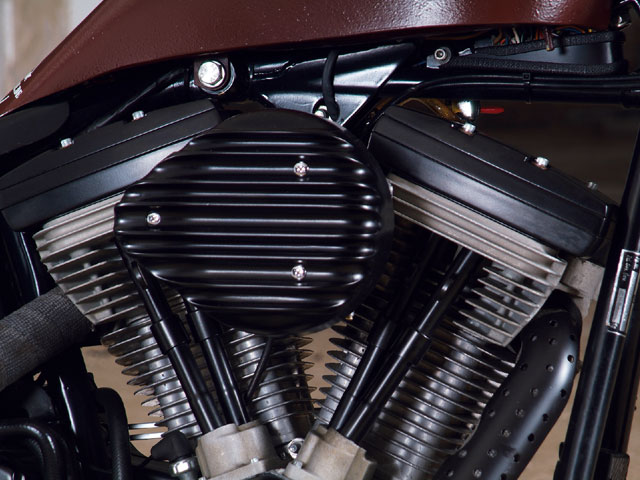 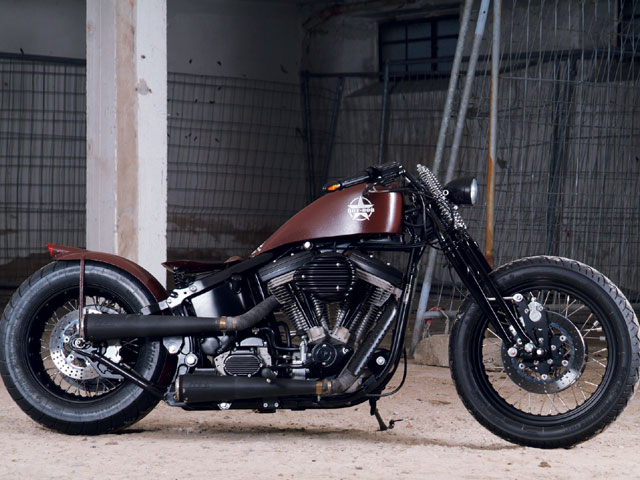 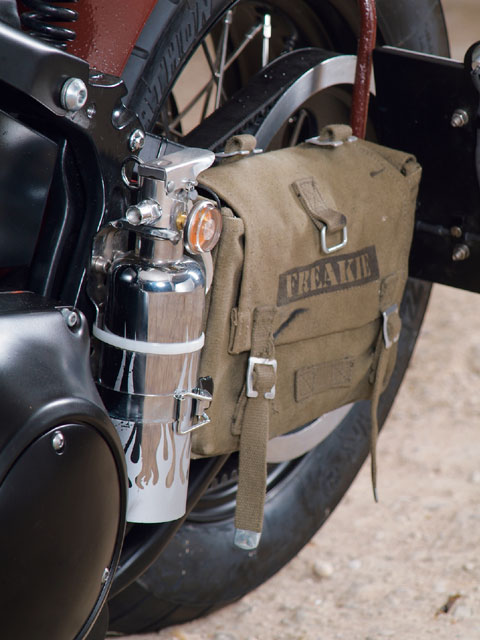 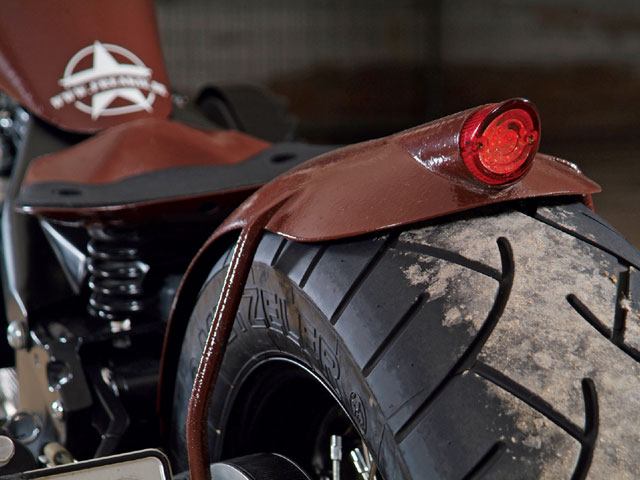 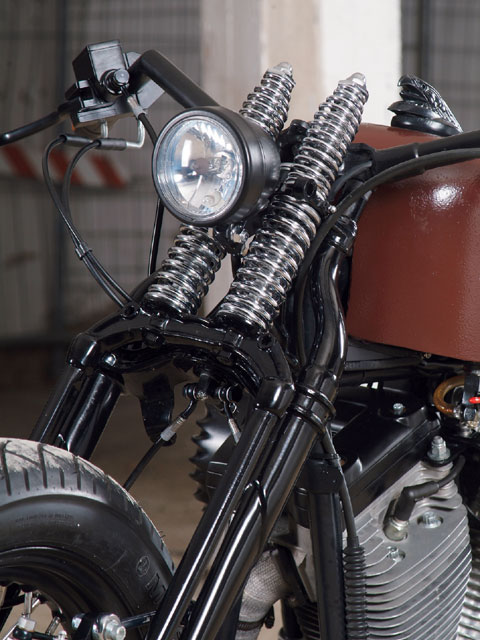 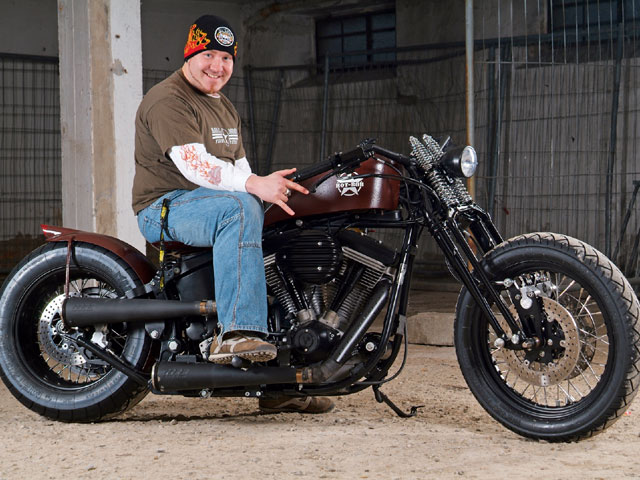 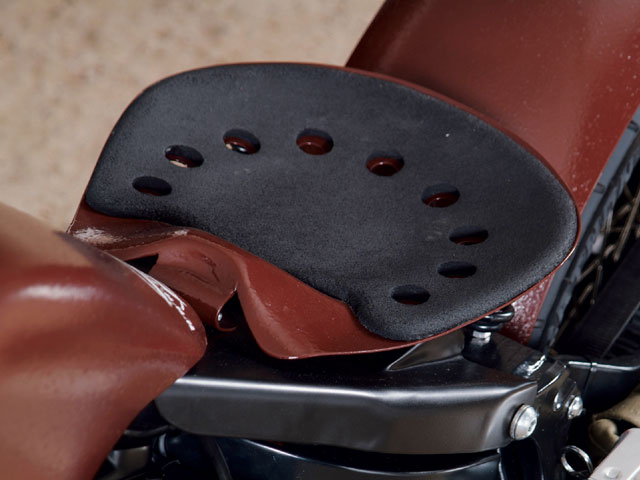 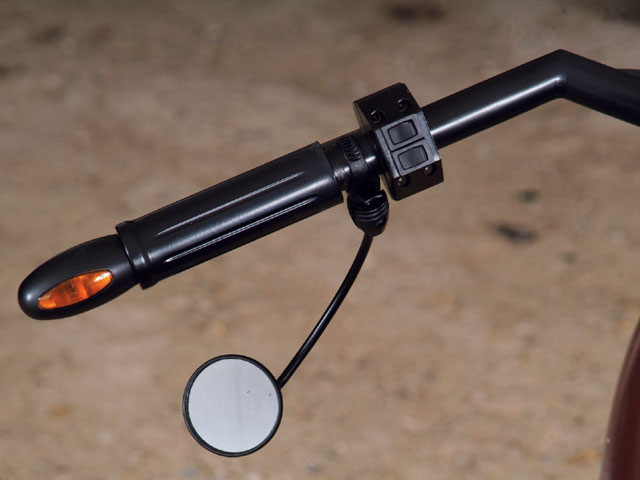 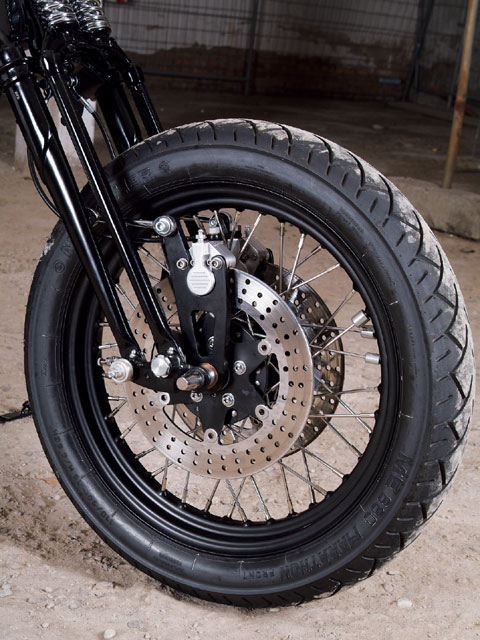 The 2004 season was coming to an end, and Gnzelsen had ridden a bunch of miles on his old, unstylish Evo. She was a good bike, but quite boring. No, Gnzelsen didn’t have the wish for technical adventures, but somehow this thing was too normal and needed some kind of a makeover.

Gnzelsen thought of his friend “Hellboy” Jrgen Hellekes who is known for covering his customs in friendly colors like earth-brown, floor-gray, and of course matte black. One foggy day they met in a bar to discuss drinking, sports, and of course women, but after a long bout of ingesting frosty brews, the subject of customizing came up and Gnzelsen mentioned the idea of having his bike radically changed.

After gargling down many, many more pints, they were in the right state of mind to decide the bike’s ultimate fate. The aim was clear: Destroy chrome, shine, and flash, and get back to basics by blacking it out. After scribbling some ideas on a napkin, under the influence of the liquid lunch, the proportions seemed to become a little different from reality. The front wheel became bigger and bigger, and other components of the bike began to change, but all in all they came up with a very nice plan.

The next morning, Gnzelsen awoke with a throbbing noggin, but his eyes were clear and the vision for the build was still fresh in his mind. The frontend would have to be about two meters shorter and a 27-inch front wheel wasn’t developed yet, but after looking back at the scribbled napkin from the night before, a classic bobber was the inspiration. Not a chopper with a long frontend, but a bobber with a steep and sporty front; short with a lean style. And the drawing showed all that was necessary: Two wheels, an engine, and something to sit on with a tank on top. What else do you need?

The boys were very enthusiastic, and a few days later the screwdrivers and wrenches were put to use, and they did plenty of work disassembling the components of the bike. After that, a naked frame and a lot of spare parts were all that were left.

The first new part became the Springer. “This has to be in a classic bobber,” Hellboy said with a grin. “Everything else would be breaking the style!”

The stylish 19-inch front wheel was narrow (ok, two rotors are not old school, but they’re very safe). The new frontend and the new pegs had classic racetracker written all over them. Next, they moved on to attaching the rubber mounts close to the engine for a smoother ride with less vibration. Then the low-flyer bar became the handlebar, which was attached lower than the upper ends of the front spring.

The gas tank is a classic Sportster tank with a modified backend. Some new plates were welded to it for a longer, stretched look. The saddle did its duty in a farmer’s tractor; they decided it was perfect for the bob because only a thin layer of cell rubber holds the lower back apart from the massive seat shell.

The rear fender was formed by a narrow metal-strip; the front fender got lost on the way home, so they just left it that way. The rear struts were attached to the swingarm and they dance with the rear wheel, while the rider’s derriere swings on the saddle above.

The CO2 bottle is a chrome-plated fire extinguisher, but it looks very good, and it’s a great conversation starter. They used an army satchel for a saddlebag due to its simplistic ruggedness. In order to keep the bare bones look, the control lights were moved onto the oil tank, still in sight but almost invisible.

One thing that had been planned differently from the final status was the use of white sidewall tires. They had them on the rims once, but for some reason the grease for the mounting disintegrated the white color on the rubber. So the tires had been changed and now the black ones seem to fit even better.

As mentioned earlier, Hellboy’s specialty is the colors he chooses for the bikes he’s involved with. The matte-black frame nicely complements the crackled, deep rusty red on the other parts. Chrome had been avoided at all costs, except for on the springs.

When he finished, Hellboy did an amazing job with Gnzelsen’s boring Evo. The bike’s classic style with the modern brakes, a deep seat, and some technical advances make the classic bobber look they wished to achieve all very possible.

Here comes the dark one: Classic but somehow mean and lean. Gnzelsen is thrilled!

Here at Hot Bike, we get a lot of rides-Harleys, hogs, whatever you want to call them-submitted by our readers. […]

A Custom 1998 Harley-Davidson With A Hidden Theme