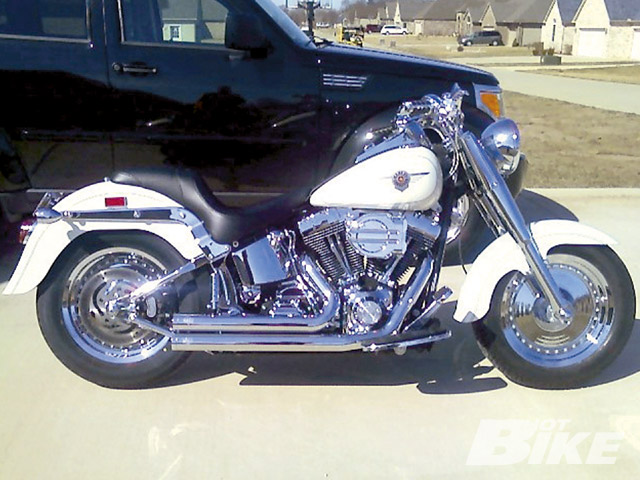 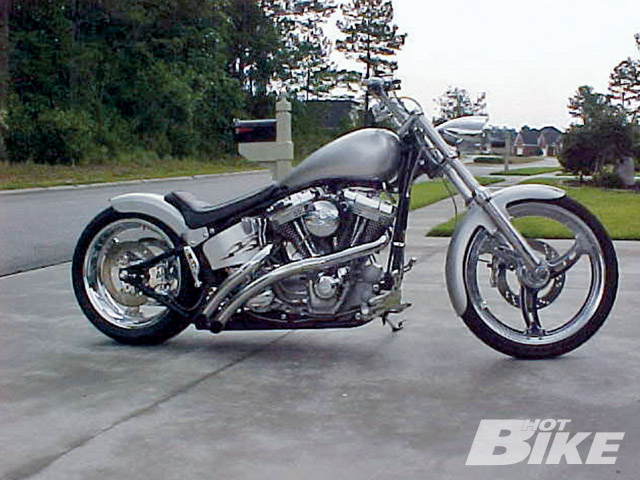 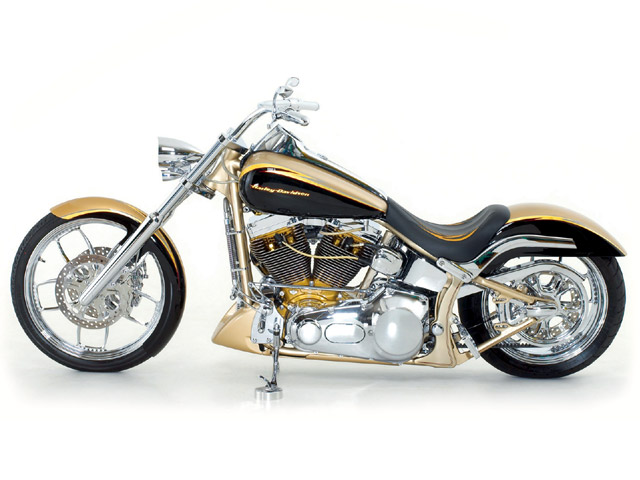 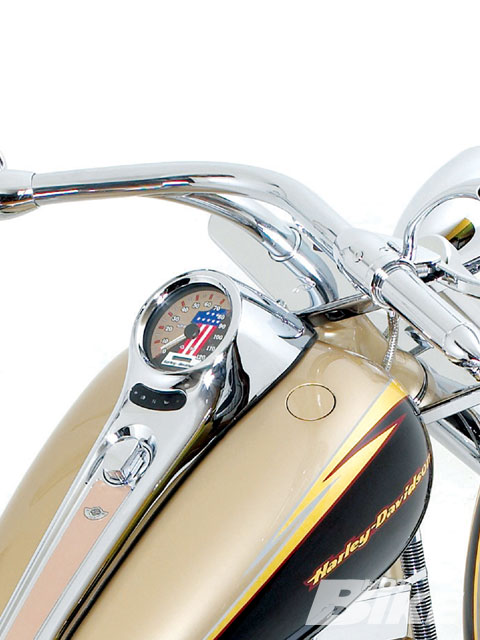 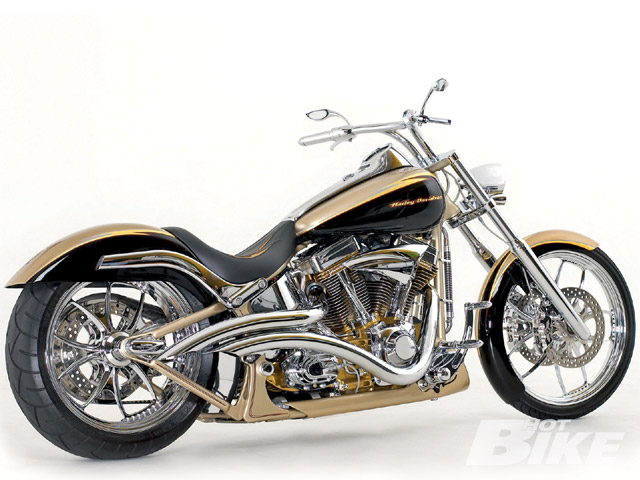 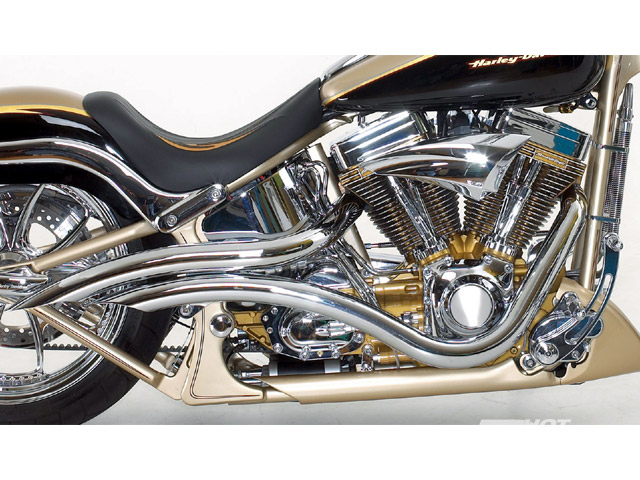 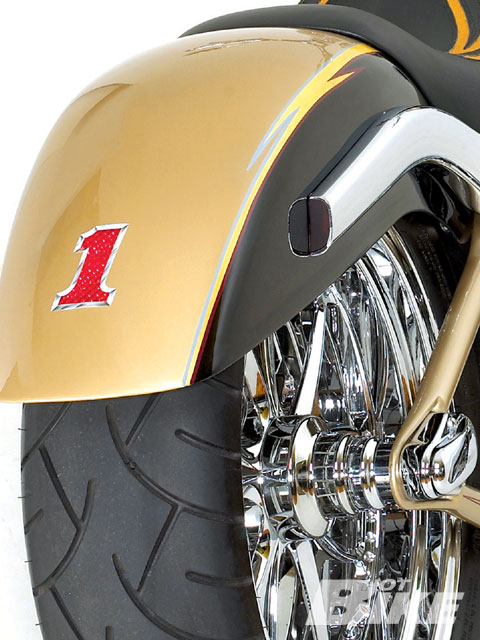 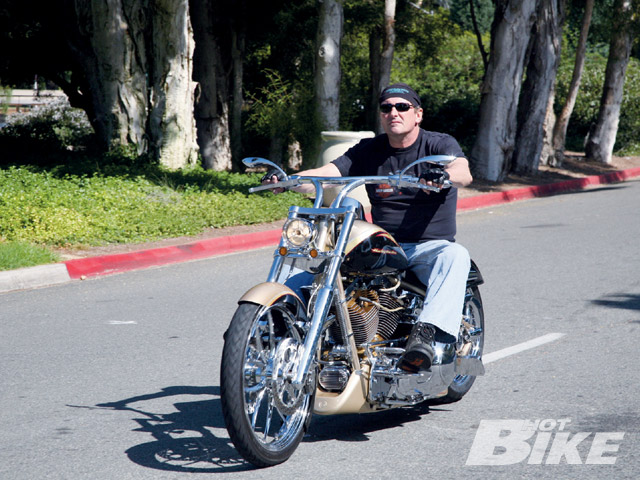 Attention, Hot Bike Readers!
We would like to start by asking you, the reader, to help us with your ride submissions. There is no shortage of Readers’ Rides coming across the editor’s desks; however, only about 1/4 of them can be used. The reason: bad photos, little or no info about the bike, and even worse, no contact info to get better photos or the needed bike specs. So before you put a stamp on that envelope or send out that e-mail, make sure that you have filled out the basics: Your name, phone number and/or e-mail, where you’re from. Then fill out a spec sheet-all you need to do is copy the info from the magazine: Motor, tran, frame, wheels, and so on. Last, a brief history about you and your bike. Now that you know exactly what we’re looking for, we can’t wait to see what you’re going to send in. Thanks!

Only One Like It
Kevin and Michelle Strahla, the owners of this bike, caught a lucky break in that the previous owner did the chroming and customizing. The two purchased the Fatboy in August of 2007 with new pipes, handlebars, and much of the chrome already added. All Kevin needed to do to make it more his style was remove the light bar and turn signals on the front, change the mirrors, and chrome the wheels. Now, it’s one lean mean Fatboy that Kevin and Michelle feel is the only one like it out there.

Not So Standard
Vinnie Rocco loves to ride his bike and only his bike. He tells us that for as long as he has been riding he will only throw his leg over his bike, so it has to fit like a glove. He started to customize his FXST standard with custom sheetmetal, paint, and chrome. Then for that exact fit, the controls and handlebars were mounted with custom spacing for his comfort. Once they were in place Vinnie could ride his and only his bike all day.

Understated Elegance
Charlie Baker is one of those guys who is not happy with anything until it is his way. He picked up a stock 2003 H-D Screamin Eagle Deuce, which stayed stock for as long as it took him to get it home. About the time that the pipes had cooled down they were off the bike along with all the sheetmetal. At first he tryed to change the look of the bike with a paint job but that did not work he needed more so the bike was stripped down to the frame and that is where he started the makeover.

He took the frame to Uptown Cycle where the owner Tony, did a good job of cleaning up all the welds, molding in the neck and gusseting all the curves into a smooth, flowing one-piece look. Then painted it to match the H-D Screamin’ Eagle colors along with pin striping, and adding in a ghosted in Harley #1 on the gooseneck, then worked on the sheetmetal.

The tank is a stock deuce unit with the gas caps shaved off and with a Matt-Hotch pop-up gas cap welded to smooth out the lines. The rear fender is a stock Deuce fender that has been cut, chopped, and rolled to give that custom fender look, yet still use deuce parts. The rear taillight is a Harley #1 mounted flush with the sheetmetal and filled with LEDs for lighting. Charlie took the original fender struts, cut them at an angle and installed turn signals in the ends of them.

He moved the rear brake to the drive side of the bike to open the right side view of the Performance Machine rear wheel. He installed Custom Cycle Controls air shock system to make it ride perfect. The front suspension is Perse Performance, with 3-inch over fork tubes. Custom Cycle Controls handlebars, Headwinds headlight with matching turn signals and 6 degrees of rake in the trees. A Fat Katz front fender mounted with custom brackets and a 21″ front wheel with dual disc brakes round out the frontend.

The seat was custom made by Bitchn’ Seat Company, and is inlaid with stingray, that was painted with a gold leaf style paint to match the motor.

The motor was disassembled, and sent to Sumax in New York, where they powder coated the engine cases, barrels and heads, as well as the transmission case. Then he had Diamond heads cut the barrels and heads, and even the Screamin’ eagle logo. Then rebuilt the motor with 10.5:1 pistons, S&S; .585 lift gear driven cams with a Feuling oil pump and cam plate, titanium pushrods, roller and rockers from JIMs inside of TP Engineering rocker boxes, with Kuryakyn 57mm throttle body, billet air cleaner and some Arlen Ness pipes. All wiring was run in the frame, and a custom made oil tank with the filler was fitted under the seat.

The new Sidi Coibuss Glove, available in black, and also white/grey, combines protection with cutting-edge style. The Coibuss is constructed […]

5 Cool Saddles For Your Bagger