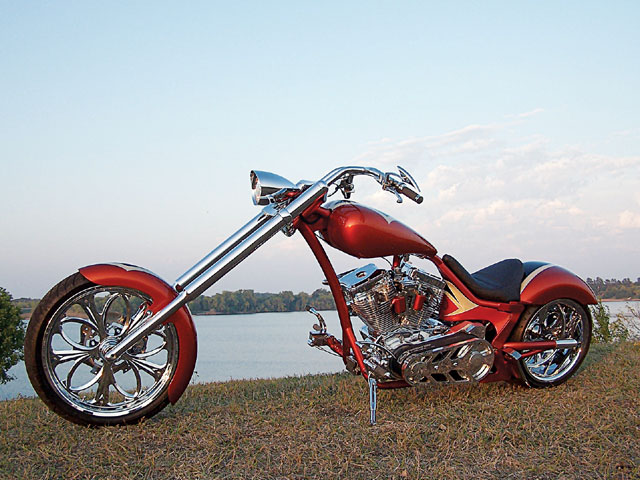 Blake Sabers doesn’t like saying where he used to work, but between us, it was a company in the Midwest that seemed as if it was going to grow into a major player but which now no longer exists. As with many of us who move on to greener pastures, Blake didn’t necessarily want to bad-mouth the place he left behind, even though it seemed ripe for that sort of thing. The good news is that by the time he decided to strike out on his own, his stint there grew to the point where he was pretty much the lead bike builder, with about three dozen serious customs to his credit. “I kind of got sick of rushing out $40,000 bikes with two-dollar Taiwan parts on ’em,” Blake told us in a telephone interview, “and I knew by then that I had my own style and wanted to do my own thing.” ‘Nuff said.

Now Blake is back in his hometown of Mitchell, SD, population 15,000. This is where he decided to pitch his tent-and now, a year later, his thriving little sole proprietorship is growing in the shadow of Mitchell’s more famous moto-man in residence: Brian Klock of Klockwerks. Blake admits it was a risky choice, and people still come up to him and ask if he “seriously” thinks he can compete with a world-renowned builder such as Brian. But Blake thinks his little town is big enough for the both of them, and so far that seems to be the case. Besides, style-wise, it’s fairly obvious that they each have their own way to skin the custom cat.

“My style is really the long, low bike look,” Blake said. “This orange bike isn’t really my core style. I mean, I like choppers, like the Jesse James style, but I just try to make stuff real simple and subtle-looking so it flows nice. I’m real picky, and I like to take my time and not rush stuff.” Of course, that can be bad for the bottom line, and Blake won’t be the first custom builder to tell you that it’s really easy to get upside-down on a bike build, where there’s no way you can recoup your investment of time on the sale price. For him, that’s a risk he’s willing to take, but, as he says, “I’d rather have it right so I don’t have to worry about it when it leaves the shop, instead of half-assing it to get it done before a deadline.”

This bike, which Blake named “Vapor,” has styling that falls somewhere in between a true custom chopper and a Pro-Street look. Blake is the first to admit that this style was hugely popular a few years back, and now the trend seems to be toward more minimalist bobbers with unique little touches. Still, he thinks there’s plenty of room on the market for his brand of cool, smooth machines. “This bike-I guess I wanted it to be clean and basic and affordable,” he told us.

The main way Blake was able to keep costs under control on the Vapor was by limiting the amount of custom fabrication. This meant that he had to both choose wisely from available parts and be smart about what he’d make by hand. It wouldn’t be a custom if he just built a bike from catalog parts, and it wouldn’t be affordable if he built it from raw metal tubes, sheets, and billets. “This one didn’t have a whole lot of custom metalwork. I bought the fender blanks and cut them to shape. The gas tank I ordered from Independent Gas Tank. Pro Street Frameworks made the frame. With this model all they offered was a chin-spoiler oil tank, and I didn’t really like the looks of the chin spoiler, so I had them send it without the tank. I made my own, molding it how I wanted and mounting it in the traditional place. This wasn’t about making the oil tank a beauty piece. I just wanted to keep the whole thing as sleek as possible and make it flow with the bike’s lines.”

Blake takes a similar approach with paint. Where some builders probably lie awake at night worrying if their painter will be able to outdo his last wild creation, Blake says, “I like real basic, subtle bikes. I guess I think some of the skull or flame paint jobs are OK, but I really like the simple, clean paint on this Vapor. Most of my bikes, when it’s my choice, tend to have this feel.” Of course, the risk with this kind of paint job is in exposing problems-you can sometimes hide imperfections with busy airbrushed graphics, but when there’s nothing but a single panel of color, the metalwork and all the fit and finish has to be perfect.

One area Blake didn’t scrimp on was the powerplant, because Vapor’s motivation comes from a 124ci S&S; engine complete with the show-polish finish. This monster unit alone is worth around $11,000 and gives this sled its “wow” factor. It’ll also surely help its future owner make short work of those long Dakota highways.

Blake was quick to tell us that although he’s proud of the Vapor, he’s now shifting his attention to building bikes that are both longer and lower, while retaining his awareness that his core clientele are not high rollers such as you’d find in Miami or Dallas or L.A., and so he can’t charge those kinds of prices. His newest efforts are going to be priced in the $25-$30,000 range-which he feels is a sweet spot. “For the most part, people around here can buy a cheaper Harley and put a few chrome parts on it, and that’s as far as they’ll go. So I’m trying to keep things reasonable for the guys around here who need service or a custom fender or a lower-end build. I’m here for the few people from Rapid City or Sioux Falls who’ll be able to drop real money into a bike, while mostly selling my custom bikes on a nationwide basis.”

You might think you’d encounter all this building skill and market savoir faire in an older builder, which is why Blake surprises a lot of people when he divulges his age. “A lot of people think because I’m young-only 24-that I am gonna build things really cheap. But I’ve built $65,000 bikes, so I know the market and how to build bikes that are worth the money.”

‹ Inspiration From The Editor › An XTREME

Here’s a lookback at some of the fun on last year’s Hot Bike Tour. This year’s GEICO Motorcycle Hot Bike […]

Anyone that has had the same bike for more than a year knows after time, you may get tired of […]