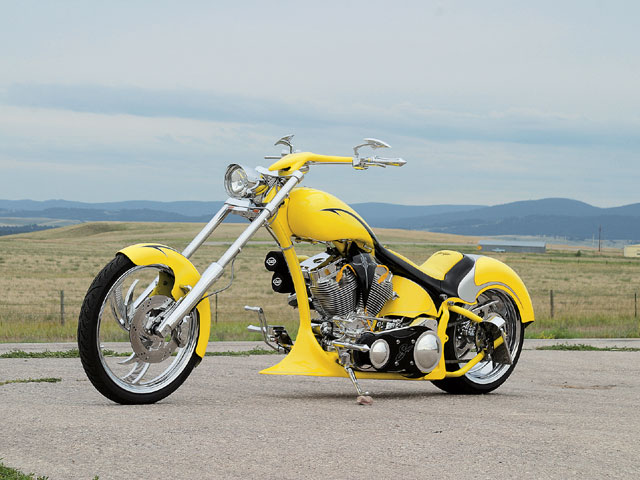 Stinger Electronics President Micah Ansley has a passion for things that look good and go fast. For years he’s flown a multitude of airplanes, streaked across the ocean in high-powered custom offshore boats, and collected jaw-dropping hot rods and Harleys. However, of all the toys he’s owned, it’s always been motorcycles that have been able to help him relax and enjoy life. Never one to hold back or settle for mediocrity, after owning several mildly custom Harleys Micah was ready to take things to the next level with a ground-up custom. Micah wanted a chopper built that would not only be fun to ride but would also serve as a great attention-getter in his Stinger booth at SEMA (Specialty Equipment Market Association) and CES (Consumer Electronics Show). The bike would also be showcased on a weekly Speed Channel program and a myriad of other electronic shows.

In his search for a builder that could meet his needs, Micah met Bryan McKinney, the owner of Smokey Mountain Custom Cycles (SMCC), located in Asheville, NC. After checking out some of SMCC’s previous creations and taking a tour through the factory next door (Smokey Mountain Machining), which is owned by Bryan’s father Dick McKinney, it became clear these were the guys for the job. Custom metal work would be no problem. Bryan holds a mechanical engineering degree from North Carolina State and had access to all the CNC machinery from his dad’s factory, a perfect fit. Add to that the expertise and experience of SMCC’s main bike builder, Dewayne Whitner, and Micah knew he had all the right ingredients for a killer custom. After several long conversations, the theme and look of Micah’s “Stinger” bike was decided. Micah wanted the bike to convey the classy, lean, and cool look of his Stinger car audio products and, more importantly, to project an image to Stinger’s thousands of dealers worldwide. That image would also be consistent with the company’s logo colors (yellow and black), and attitude was essential.

Everything has a beginning, and for this project a Kraftech Softail frame was the starting point. With 6-1/2 inches of stretch in the backbone and 4 added to the downtubes, the frame provided a good foundation to start the chopper project. SMCC enhanced the frame by fabricating and molding panels starting at the neck area, extending to the seat to decrease the tunnel opening on the tank and to allow for a smoother flow at the front of the bike. To further capture the “Stinger” theme, they fabricated a sharp pointed air dam on the front of the frame. SMCC wanted the seat area to remain clean and molded; however, they also wanted to have a setup that would be user-friendly for any maintenance requirements or later customization. The rear fender, oil tank, and gas tank are all easily and independently removable, yet the lines of the bike flow effortlessly from the front to back.

The oil-tank mounts on the frame were removed from their initial position and placed so the tank could be mounted from its top. This helped clean up the area between the motor and transmission and allowed SMCC to fabricate a sharp point on the front of the oil tank. They also added extensions to the back of the tank and shaped them to match the geometry of the frame. This styling added to the “completely molded” look while still making the tank easy to remove.

The rear fender took some major modifications to achieve the clean look they wanted. SMCC purchased five different fenders before they found one that would provide a good base to work with. This unit came from RC Components and was an internal strut design. They cut the fender and redesigned the way it would sit over the rear tire. They also added approximately 2 inches to the fender and shaped the rear into a simple point. To complement the bike’s theme, SMCC used a CAD to generate a simple radial point design and used that contour, into which they flush-mounted the L.E.D. taillight and turn signals. For those long hauls, SMCC also fabricated a detachable sissybar with backrest pad.

The handlebars for the project were initially purchased from Redneck Enginuity. SMCC felt they were way too simple for this bike. So they cut them apart and used the pieces to achieve a pointed geometry with an underside gauge mount and hood. The hooded portion works well to block the sun on the digital speedo in the daylight while providing a good surface area for the pinstripe artist to play. You can see from the side of the bike that the angle of the point on the bars helps the lines to flow from the angle of the bars all the way to the point on the air dam.

The motor chosen for this project was a 124CI S & S mill with VFI (variable fuel injection). Wiring the bike was quite a chore. Between the sensors, fuel pump, lights, and gauges, more than 700 feet of wire was used to complete this project. Bear that in mind when we tell you that it fired on the very first attempt!

With all of the wiring that was required on this bike, it was almost impossible to hide it all and still leave access for possible maintenance later on. Anyone who rides customs knows you have to give them lots of TLC to keep them in top-notch running condition. However, wires hanging from the downtube to the center of the intake are very unsightly. To ensure that none of this would take away from the bike’s flow, SMCC hand-fabricated decorative side covers that could be easily removed to access the sensors and cables in this area. The covers were molded, painted, and pinstriped to complement the rest of the bike’s theme.

SMCC designed and CNC-machined the BDL belt cover in a tribal layout, which adds a few more radial points to the left side of the bike. They also machined out the Stinger “S” logo in the side and mounted one of the four Varod lights in between the pulleys of the BDL. For added show they placed yellow Lexan behind the “S” so that when the lights are activated, the “S” logo will light up on the BDL unit.

Stinger has created a very unique theme bike that one of their lucky and loyal salesman will win. Showing in the Stinger/Peripheral booth at this season’s SEMA Show in November and returning to Las Vegas for the CES show in early January, Stinger will begin the “King of Sting” promotion for 2006. The bike will be awarded to the Stinger salesman who sells the most Stinger product at a retail level. With a value exceeding $60,000, this contest bike is sure to excite and motivate Stinger’s account base.

Motorcycle Upgrade With Drag Specialties Parts – Cover It With Chrome