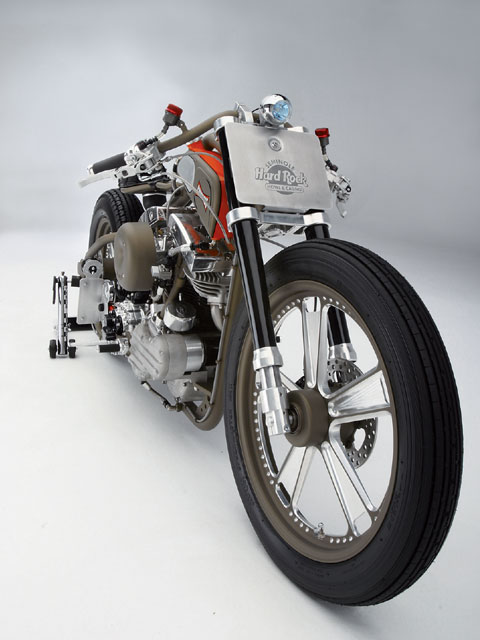 Coming from a collaboration between the Seminole Tribe of Florida and the Hard Rock Cafe, the Seminole Hard Rock Resort & Casino in Hollywood, FL, is all about fun, blending the excitement of the Hard Rock with a Vegas-style casino and top-notch accommodations. To bring that excitement to the road, the Seminole Hard Rock Roadhouse tour was born, featuring four of the motorcycle industry’s most talented and innovative builders. This year’s invitees were Paul Cox and Keino (Indian Larry Legacy), Aaron Greene (Paramount Custom Cycles), Eric Gorges (Voodoo Choppers), and Gard Hollinger (L.A. Choprods).

At stops including Daytona Bike Week, the R.O.T. Rally, Laconia Bike Rally, Daytona Beach Biketoberfest, and the Fort Lauderdale Bike Rally, the builders and their specially created machines were on display for all to see. One of the best aspects of the tour is the chance for one lucky contestant to win the bike of his or her choice. Log on to www.hrroadhouse.com, or stop into the Roadhouse in person by November 1, 2006, for your chance to win. All four bikes feature cutting-edge designs and parts supplied by the most respected names in motorcycling.

Gard was contacted by Carrie Repp from the Roadhouse Tour to be a part of this year’s biggest biker party. Gard and partner Jay “J-Bear” Brown jumped at the opportunity to present their Choprods creation to the rest of the country. One hitch: Daytona Bike Week was only weeks away, and the pair had to come up with a design, procure parts, and hand-build the frame.

Gard is an artist who just happens to use metal and motors as his palette. Although Gard has just recently emerged on the grand stage of the V-Twin world, he’s been working on bikes for 40 years. At various times during that period he was a professional motocross, jet-ski (remember those?), and offshore boat racer. He’s owned motorcycle businesses for the past 25 years while being directly involved in the American motorcycle industry for the past 15. So, yeah, he shines a sly smirk when he’s called “the new guy.”

Gard builds bikes “inspired by his racing roots but intended to be entertaining,” because, he adds, “that’s what this business is all about, entertainment.” With that in mind, Gard set out to build the frame for the bike seen here in three days. He could have made it easy on himself, but that’s not his style. Instead, he decided to enter uncharted territory and design and build a frame that had the oil tank within the frame tubes. Starting with 1018 DOM steel tubing, he had to thoroughly clean the inside of the tubing to keep it from contaminating the oil. The boardtrack-inspired frame features a single-loop cradle for the S&S; shovelhead-style motor, along with two backbone tubes. The top tube, located above the fuel tank, serves as the top of the oil bag, while the seatpost tube and the downtube finish out the sealed loop that holds the 2-1/2 quarts of oil. Lubricant is fed to the oil pump via a fitting on the bottom of the frame, under the motor. Return oil is routed to the fitting on the left side of the top tube, while the right fitting on that tube is for the vent. After the frame was TIG-welded, it had to be pressure-tested to make sure there weren’t any leaks. Under the transmission the single tube flows into a Y-shape that forms the frame’s rear section, which continues rearward toward Choprod’s hidden axle blocks. An added touch is the welded-in guides that keep the cables and hoses sano. Seating comfort comes by way of an updated pogo-style seat with an airbag to smooth out the bumps. Bill Wall dug deep into his box of goodies to make the stretched leather seat with brass pins.

When it came time to dress up the bare metal, the Choprods crew went to RS Performance Coatings for a unique greenish/gray ceramic piston coating. This is the same material put on pistons and metal parts to protect against heat and friction. The coating was applied to the Performance Machine wheel blanks, along with the brake rotor carriers, before they were contour-cut into their final shape. RS Performance was also responsible for the orange powdercoat on the gas tank, while master pinstriper Thick laid down the brushed-on pinstriping and Choprod’s logos on the handmade aluminum gas tank. Eschewing tradition, there is no chrome on this scoot-anything shiny is polished metal.

Trac Dynamics, a leader in sportbike and dragbike parts and accessories, provided the 4-inch-under inverted forks. On top of the trees, Trac risers hold 7/8-inch-diameter Choprods handlebars. Flanking the down-swept, boardtrack bars are some of the trickest-looking hand controls available anywhere. They’re made by the Euro company ISR but are available only through Gard here in the U.S. Red-capped master cylinders for both the PM hydraulic-assist clutch and front brake sit atop the bars. Up front, a small PIAA headlight fits in between the risers and above the Hard Rock Roadhouse aluminum number plate made by MarkKings.

Power for the retro-modern scoot comes from a 93-inch single-cam generator motor with shovelhead-style rocker boxes and a magneto bolted to the front on the right side. Gard bent a custom two-into-one stainless-steel exhaust system from tubing sections scavenged from the motocross company FMF. Sound and gas emanate from a titanium silencer, also from FMF. Power through the PM primary and clutch is transferred to the very first ever Torque Box 5 tranny from Baker. On the blower-looking tranny case, the Baker crew used 12-point hardware to put it all together. Keeping with that theme, Choprod’s spent a fortune on matching 12-point stainless hardware from ARP for the entire bike. Once it gets going, the bike is stopped with two-piston drag-racing calipers and 8-1/2-inch-diameter floating rotors from PM.

We hope you’ve gotten an idea of the ingenuity that went into this bike. It takes a lot of work to make a bike look stripped-down. As for the name, Gard’s beautiful wife Sharon came up with that. If anyone but she had suggested that name, he surely would have changed it. He’s that modest-but stylish, too. Check out his shirt.

After of some epic riding through the Smokey Mountain Ridge, we landed in the sleep town of Maggie Valley, North […]

For the past couple of years, at bike shows from Sturgis to Laughlin, people have gathered to see the latest […]