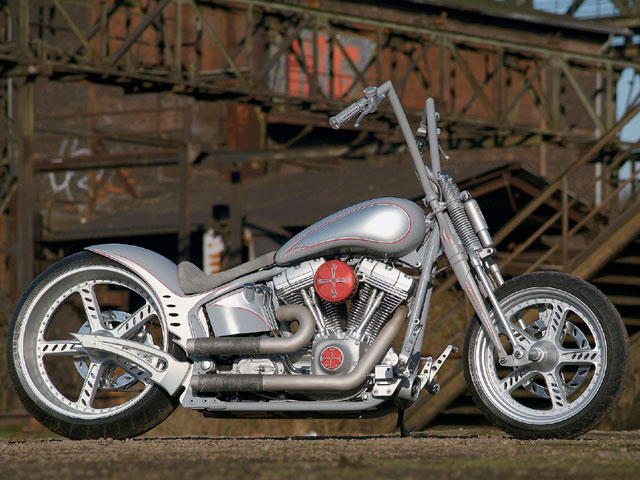 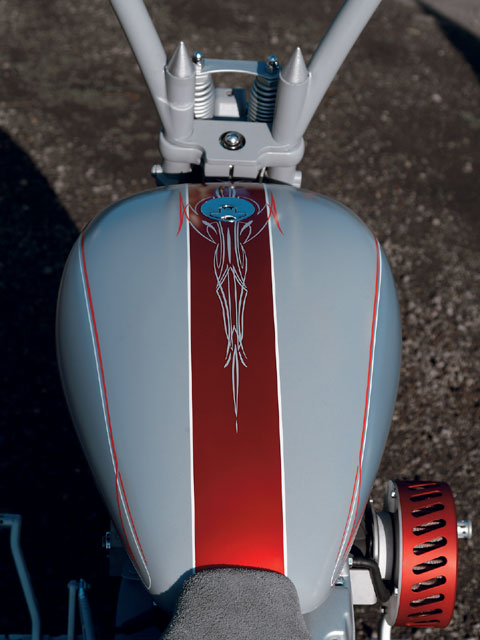 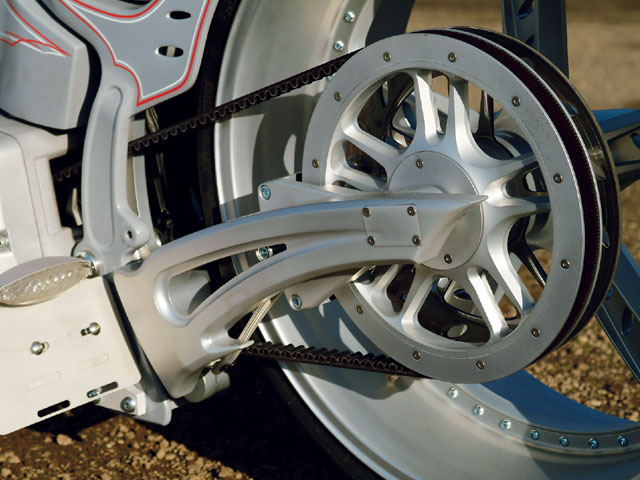 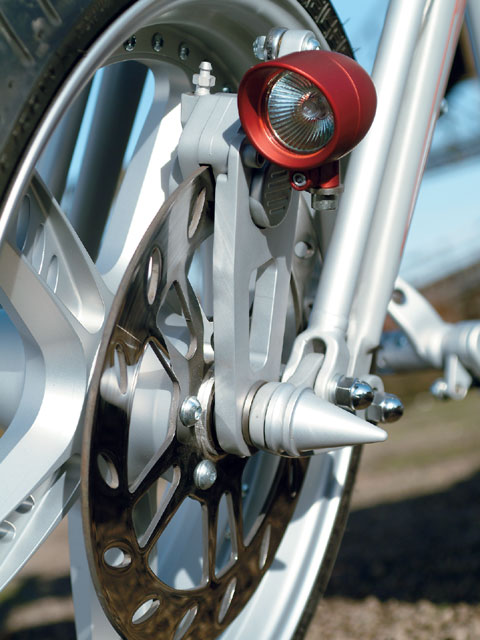 Yes, the headlight (as little as it may be) is mounted to the caliper mount. 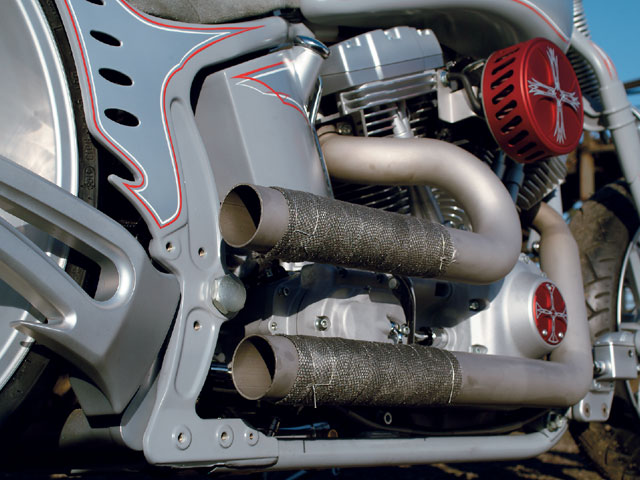 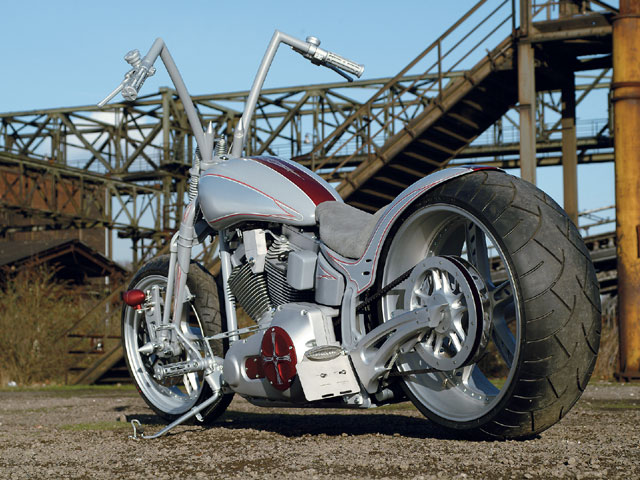 The fuel pump assembly was relocated from the top of the tank to the bottom. 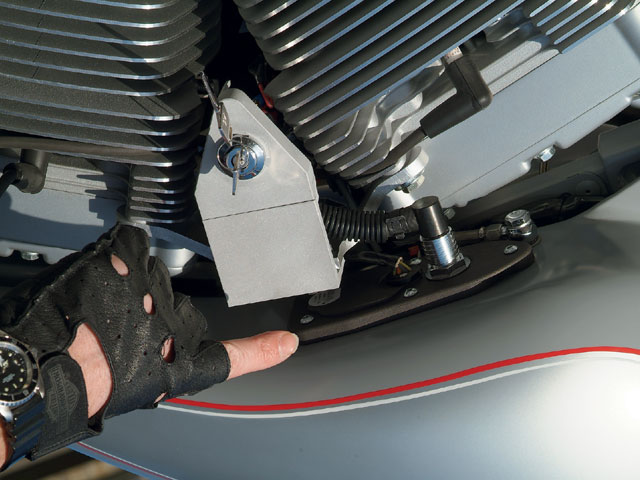 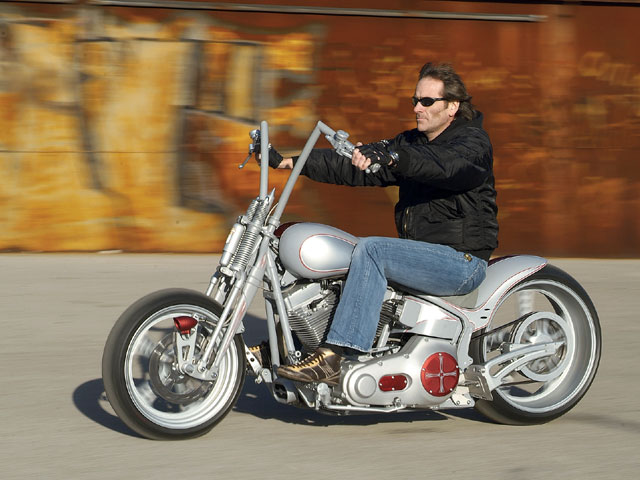 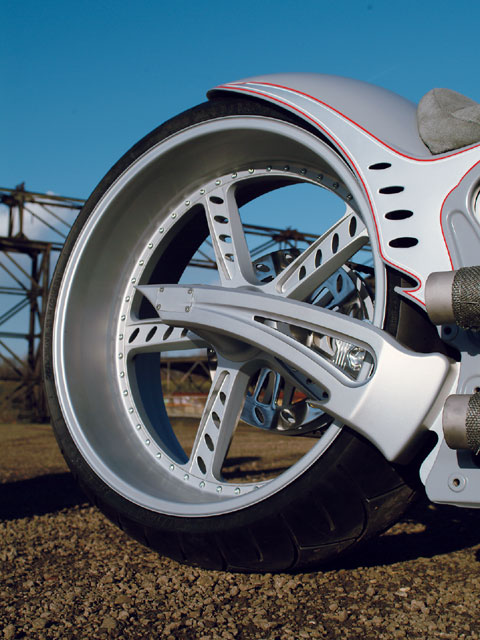 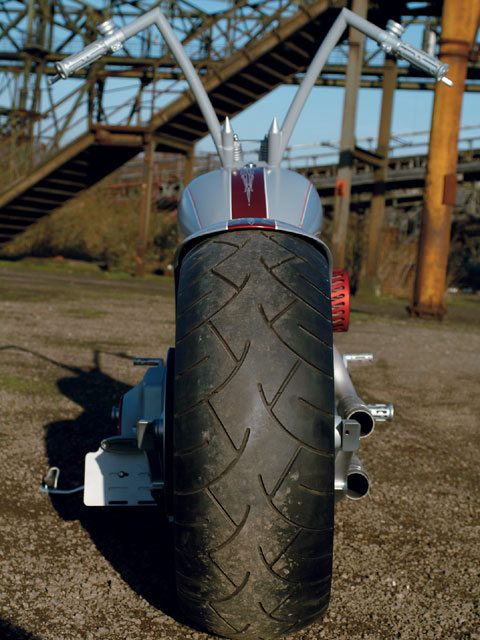 In a day and age when builders strive for fabricating no two choppers that are alike, one characteristic is generally the same across the board: a 21-inch front wheel. There is, however, no common dimension for a rear wheel, since the industry fluctuates among the likes of skinny, big, and real big-lots of variety, you know. The bike on these pages, called “Quicksilver,” goes back to the old 21-incher and how that dimension can be used on bobbers as well.

Quicksilver may suggest a bike that’s fast, but its name wasn’t chosen on that basis alone. And the name wasn’t picked based on the bike’s gray and silver colors. So what’s going on here? Quicksilver came to be because it was built just two weeks after its concept was formulated. Well, that’s speedy, to say the least.

Quicksilver’s concept (at least the idea for the rear wheel) started brewing in Sturgis when this bike’s builder, Andreas Bergerforth of Hamminkeln, Germany, and the crew at Thunderbike were there earning the AMD Vice World Championship for their bike “Spectacular.” Sturgis was the place where they first got a taste of our wide-tire craze, and they immediately took a liking to that robust rear.

Coming from a car background, where Andreas was a first-class fan of big rims and wheels, it’s no wonder he dug the same on bikes. In fact, when he first laid eyes on the 260mm tire in Sturgis, his wildest dreams seemed to take shape as he started building this bike in his head. Andreas had heard through the grapevine that this particular rear-wheel dimension would be available from Metzeler some time in the future, but he never could have imagined that it would look this good.

Once they made the hop, skip, and jump from Sturgis back to Germany, Andreas and the crew got started with plans to build a bike based on that new wheel from Metzeler. But they ran into a small glitch in their plans: It would take some time before this rubber sausage qualified for the European-and especially the German-markets, so Andreas and his crew had to wait until the German Intermot-Messe people and the Metzeler folks told them when this tire would be available. For Andreas and the crew, this came as both good and bad news. The shop was in the middle of building three different bikes for the Custom Bike Show in December, and it was only a few weeks away. Even if that Metzeler tire had come in, they didn’t plan on having a bike built with it on time for the bike show. There was simply too much other work to do. But then again, where there’s a will, there’s a way, and the Thunderbike crew was used to making nearly impossible deadlines happen.

To prepare for the moment when the Metzeler tire rolled through the shop’s doors, Andreas and crew designed a stylish prototype of a 21-inch, 5-spoke rear rim to hold the Metzeler 260mm tire. They wanted to have the jig handy, just in case, but nothing more than that. Their work orders now had risen to five bikes, and the future looked grim in terms of getting a chance to build one with that big tire. For starters, there had to be a new swingarm, a new pulley, a totally different belt length…the to-dos went on. “As we said,” they told us, “there was almost no chance of getting it built in time.”

Call it perfect timing or a stroke of luck-as the tire rolled through the shop’s doors and into Andreas’ and the crew’s hands, they went back to their ol’ handy prototype and looked at it with the Metzeler 360 among all the other bikes that needed to be built. They immediately knew that they had to have this bike built for the upcoming show.

One of Thunderbike’s crew, Herbert, at once began measuring and building a new frame with a new rear end. He milled a prototype swing and put it into a low frame, so the wheel could be fixed and a fender could be constructed. Michael (“Thundermike”) then took to the project, showing off his skills and craftsmanship, “especially at the connection of the frame and fender,” according to Andreas. After the seat shell matched with the frame, all the sheetmetal was handed to painter Ingo Kruse. Up to that point in the build, only four days had passed from the time they first received the tire.

Ingo knew that the paint job had to reflect an old-school theme. The crew found this funny, because here was the most modern tire Metzeler has to offer, and they were building an old-fashioned bobber with it. In the end, however, this contradiction wound up making it even more special to them.

As Ingo received the parts, Andreas also handed him two matte-silver powdercoated engine covers as a color pattern to follow. The rest of the engine already came in that color because it was taken from the “Platinum Model.” Ingo not only managed to pull off the stringent deadline, “he did a great job,” Andreas said. In only one week, he had come up with those silver and gray colors, and, even more, “this combination showed his personal tag, as usual.”

By the time the parts had returned, the handlebars, frontend, and pegs were already bolted on, and everything was ready for final assembly. The Thunderbike crew had two days left to reassemble the newly painted bike, connect all parts, and build a complete wiring system. At the same, the crew needed to finish three other bikes, then transport them to the bike show, as well as finish building a fair stand. As if Andreas and the crew didn’t have enough problems and tight deadlines to work through, the exhaust for this bike came with a problem. It seemed no part wanted to match up, so the crew had to build a new one. They took seamless VA tubes, made them longer, and had them sandblasted to achieve the matte styling of the bike.

On the last day and down to nearly the last minute, Andreas and the crew finished the bike and loaded it up in the trailer for the show. Although Quicksilver was a quick build, to the crew it was efficiently built and finished on time. Andreas and the troopers felt they had shown what they are best known for. “Quicksilver became one of the most respected bikes at the custom bike show,” according to the Thunderbike crew. That’s not bad for a bike that was practically built in only two weeks.

When the Harley-Davidson Pan America was released, Harley traditionalists held their breath, initially balking at the MoCo’s attempt at entering […]