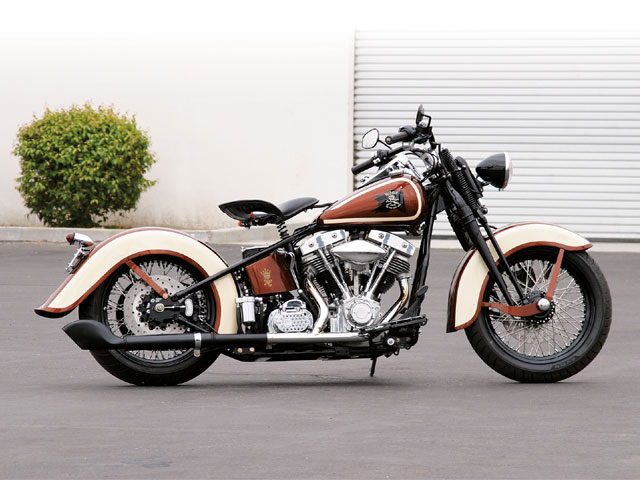 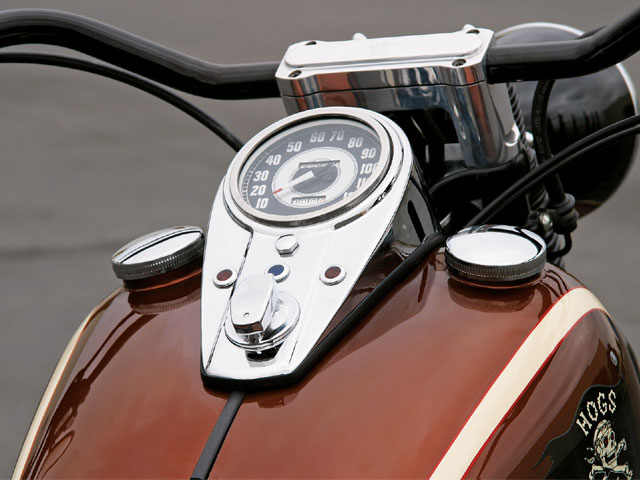 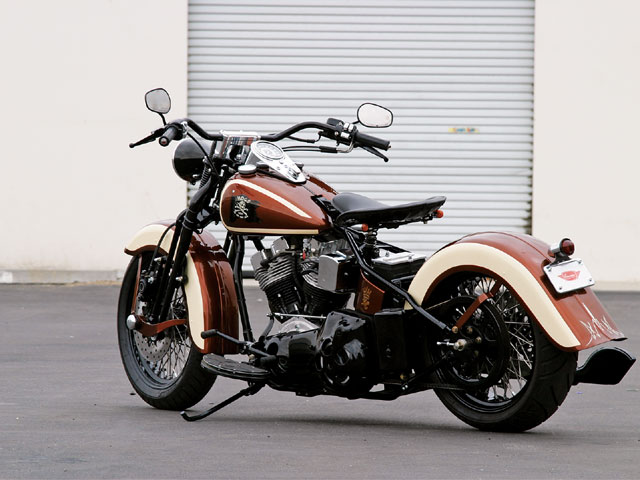 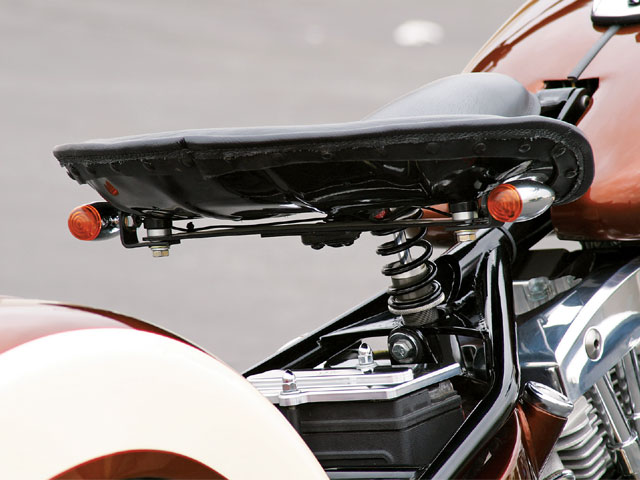 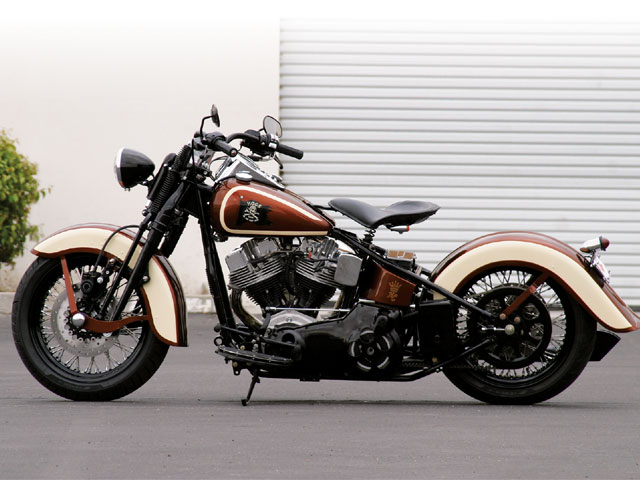 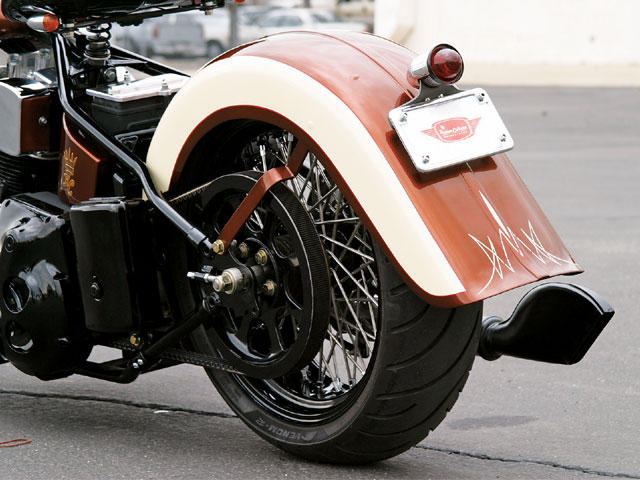 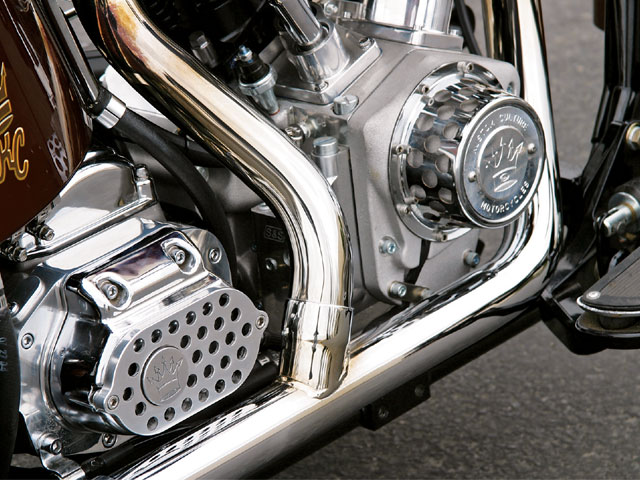 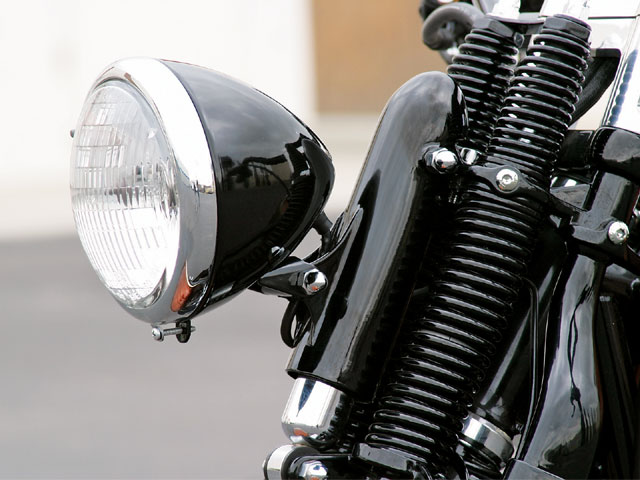 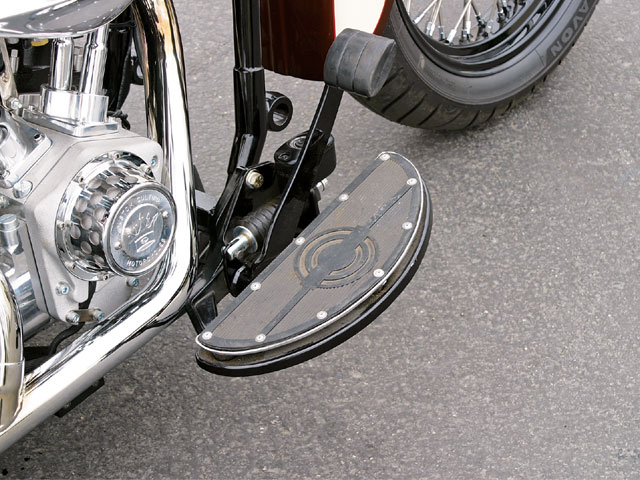 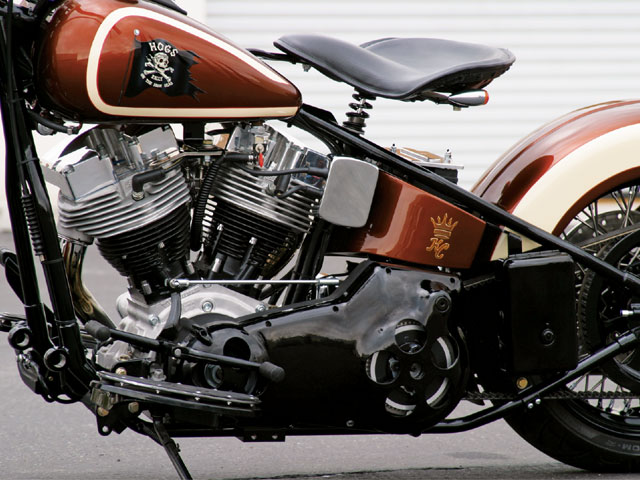 Some motorcycles are born out of a different era, some pay homage to the past, and others replicate. This bike, by Efram Mah of Kustom Culture Motorcycles (KCM), located in the San Francisco Bay Area, is a combination of the three; it has the flavor of an older bike with modern technology thrown in, yet still remains as aesthetically pleasing as something from the past. KCM was founded on the idea that old bikes are great, but most of the time you end up spending more time broken down on the side of the road than you do riding them. KCM has committed its manufacturing processes to producing the highest-quality parts and motorcycles, mimicking the old-style V-Twins, but using modern components to make the bikes more safe and reliable.

Back in early 2006, Dean and Debbie Anderson, of the Hogs on the High Seas Rally (HOHS), “the only floating motorcycle rally,” commissioned Efram to build a Kustom Culture bike to be used as the Grand Prize on their ’06 Alaskan cruise. If you didn’t know, a couple of times a year the HOHS rally leaves port and hits the high seas as a traveling party packed with bikers for a motorcycle rally on a luxury cruise ship.

Every year, Dean and Debbie raffle off prizes as well as motorcycles, with all the proceeds going towards their Hogs on the High Seas Kidney Dialysis Fund. The fund was established to provide dialysis patients the opportunity to relax and enjoy a free cabin, airfare, and dialysis for the entire seven-day trip.

Dean chose KCM because he knew he would get a uniquely styled custom bike that was a blast to ride. This bike is one of KCM’s production Super 80 R American Classics, with an S&S; 93ci shovelhead. However, this bike is more of a one-off custom with some distinctive parts (which are KCM through and through) than it is a production bike. The most obvious KCM part is the eye-catching, nine-hole primary drive, which dominates the left side of the bike with its gloss-black powdercoat and hot rod holes cut in the dry belt primary cover, revealing the inner workings of the Rivera primary-drive system. Turn signals, although cumbersome, are necessary, and KCM has a unique way to hide them and still be law-abiding-they’re stealthily mounted under the KCM spring solo seat. Although it may look like any number of spring seats that are currently available, this seat is set up like the old pogo seats with improved dampening, so when it’s time to take this beauty out on the open road, you can rack up the miles and still walk.

The rear of the bike is accentuated by the 180mm Avib tire that’s wrapped with the KCM signature FL-style ribbed fender. Up front, you can see KCM’s craftsmanship in the custom KCM handlebars, KCM low risers, and KCM flatside gas tank. The bike’s geometry is unique in that the frame features 35 degrees of rake and 1-1/2 inches of stretch in the backbone. With the wide tire out back and the modern Springer up front, it’s easy to see that KCM has embraced some modern trends and successfully mated them with the nostalgia of yesteryear’s V-Twin. With all the bikes out there today, it’s rare to come across a manufacturer with a signature style like KCM.

The entire week of the ’06 Alaskan trip, everyone was excited to see who would win this KCM grand prize bike, and Martha Rychener of Smyrna, TN, turned out to be the lucky soul. Soon after learning she was a winner, she received a number of cash offers for the bike. But when all was said and done, Martha decided that since she and her husband already had bikes, they would donate it back to Hogs on the High Seas to be raffled off during the ’07 Caribbean Cruise, which will be held November 4-11. Nobody was happier that more money would be donated to the dialysis foundation than Dean and Debbie. While you don’t have to be a cruise member to win the bike, there will only be 1,000 tickets sold, with past attendees getting first dibs. Then, starting March 1, 2007, the remaining tickets will be sold to the general public on the Hogs on the High Seas website (www.hogsonthehighseas.com). And while the ’07 Caribbean Cruise is most likely sold out, that doesn’t mean you can’t sign up for one of the other future rallies.

Say hi to Myrick Robbins. Courtesy of the Sturgis Motorcycle Museum Time to Honor the Ride. Build the Legacy. The […]

Hot Bike recently ventured out to Alcoa, Tennessee and the 40 Cal Customs shop where Matt Harris an invited builder […]

Jesse James, Chop Meet, And More – Inside The Industry