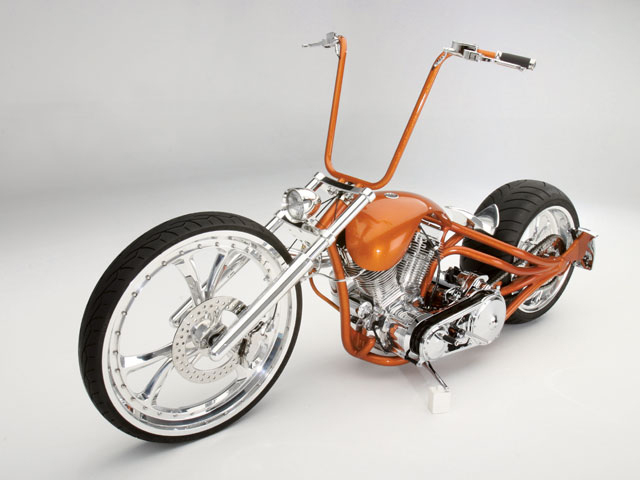 Imagine running a busy shop where things are good, but you’re always striving to be better. Your day planner is full-so full, in fact, that it’s booked solid months in advance, and time has become your most precious commodity. Do you take on a new build if it would mean more business, even when it seems as if there is simply no time to spare? The day the phone rang for Aaron Greene, the owner of Paramount Custom Cycles (PCC) in Reno, NV, he was neck-deep in work, pushing bikes out the door, shipping parts, parting out a roller, and placing an order. When he was handed the phone, he was told, “It’s Carrie Repp from the Seminole Hard Rock Roadhouse Tour.” Having been around to see just how well the last Hard Rock Tour did, Aaron immediately knew this was not a phone call to ignore. Only four builders a year are picked to be a part of the Seminole Hard Rock Roadhouse Tour, and this time he turned out to be one of them.

By the time the conversation was over, Aaron knew he was going to build a bike for the tour regardless of any obstacles. It was too good an opportunity for the shop to pass up, but the build deadline was going to be a tight one. The shop was still on a full schedule between the Cincinnati industry show and Daytona, leaving Aaron about 14 days to complete the build-along with keeping his commitments to all his other customers. Aaron felt that it would be worth killing himself over in the end. After all, it was his time to shine. Aaron had been around all the builders for events such as Billy Lane’s Blood, Sweat, and Gears tour and the Discovery Channel’s Biker Build-Offs, so he knew what it was going to take to build an impressive machine. Only this time around, he wasn’t going to be just observing or helping out-this time it would be all about what he could bring to the tour as a builder on his own. Aaron felt he was definitely ready to take on the challenge.

He already had some prototype stuff lying around just in case something like this came up. He’d been talking to the guys at Weld Wheels about a set of tall wheels, something along the lines of 20 inches tall for the rear and-get this-even bigger for the front. From the first time he saw tall wheels, Aaron planned to build a bike with a rigid chassis with a single-sided rear.

With the due date for the bike delivery approaching quickly, Aaron called up Rich at Weld Wheels. The two of them planned on the 20-incher for the rear of Aaron’s bike so that he could still go wide with the tire, but they decided on something a little more trick for the front. They planned a never-before-seen 26-inch wheel for the front. This meant that not only did custom wheels and tires have to be fabricated in an extremely short period of time, but so did a custom frame.

In an effort to save time, Aaron called his brother Mark and told him he needed to build a highly customized frame ASAP. The two decided to build the bike based on a CAD drawing. By getting every angle down on the computer, Aaron would have a virtual base to start building the chassis and keep moving forward with the project. Within a couple of days Aaron had a chassis built to house a 124ci S&S; fully polished Evo and a six-speed Baker transmission. PM donated a primary and a set of mid-controls, along with matching hand controls. Now that the bike was really starting to take shape, he needed to work on the gas tank. The shape Aaron was after would flow over the top of the motor along the backbone, while the oil tank would fit under the transmission: a one-off for sure.

As Aaron was working on the gas and oil tank, his brother Mark started on the CNC seat pan with the Hard Rock logo on top. Aaron then figured the 124 needed some cool induction. The solution was two S&S; carbs and a custom intake manifold. Aaron liked how the lines looked and how well the setup worked with the custom exhaust pipes.

With not much time left, Aaron finished up some final details and went straight on to the paint. He still had a couple of fittings that he needed to weld on the kidney-shaped oil bag and actually did the work as the bike sat at the paint shop. PCC’s in-house painters Phil and Brian worked around the clock to get a custom mix of orange and gold miniflake to cover the bike. With only about four days left before Daytona, the parts started to show up at Aaron’s lift to get the bike re-assembled-and fast. He still didn’t have any wheels for the bike, only a rear mockup wheel. Worried, Aaron called up Rich at Weld Wheels again, and they stepped up the pace, running all weekend to finish his wheels in time. In fact, Aaron got them at his doorstep with no time left before the bike had to leave. The bike was done at 3 a.m., with two days and six hours left to get it to Daytona in time for the Hard Rock Tour. It was a straight drive through, but they made it just in time. The new Hard Rock Bike was done. Aaron had pulled it off: A single-sided rigid rolling on 20-inch and 26-inch rims was hitting the streets. It was a lot of work, but it paid off, thanks to the guys at the shop and some very late nights. It was Aaron’s time to stand out, and he and his bike did just that.

Road rash defense without the road racer look. By Jeff G. Holt These made-in-the-USA jeans were built for riding. Sure, […]

2007 Daytona Bike Week: At The Speedway

If you own the earliest copies of Street Chopper, you know the Big Twin trike was one of its earliest […]