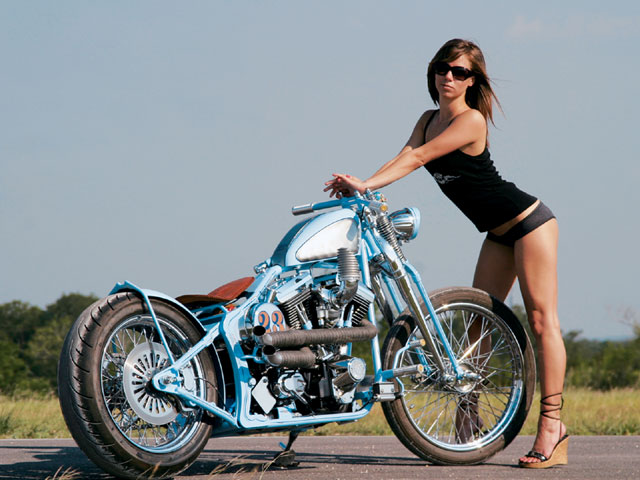 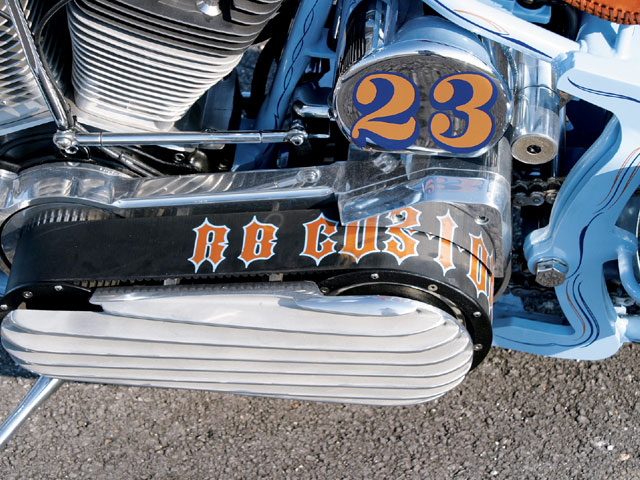 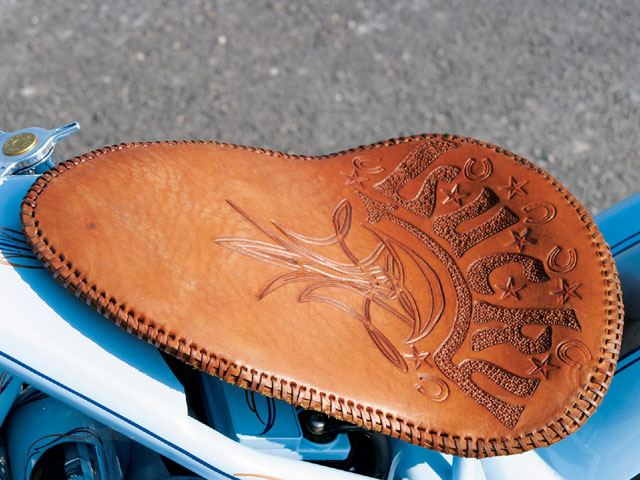 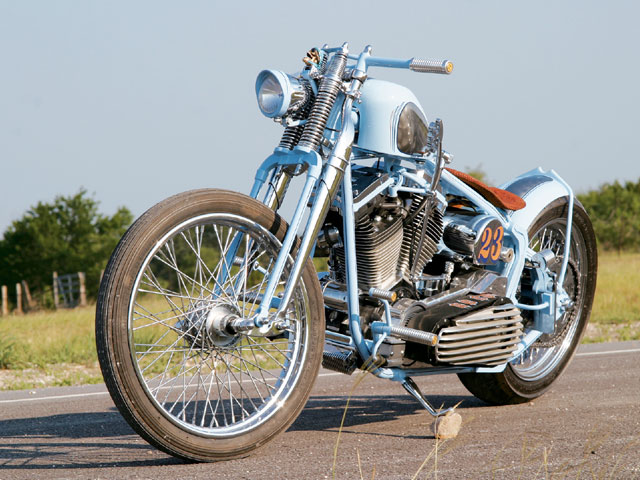 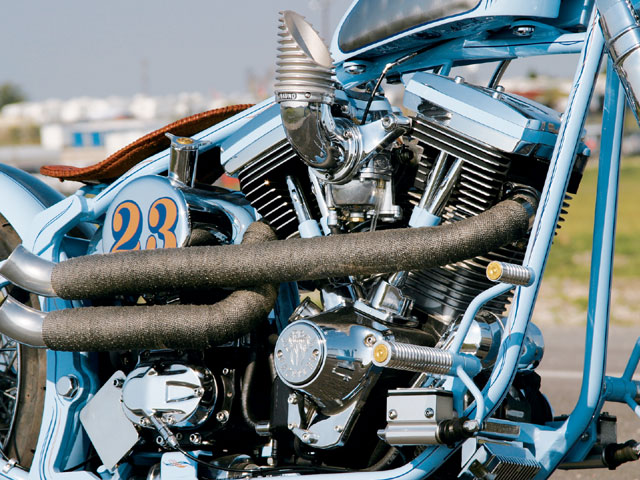 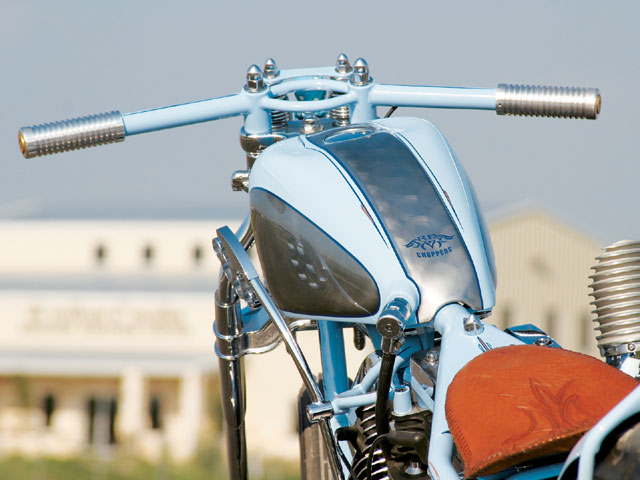 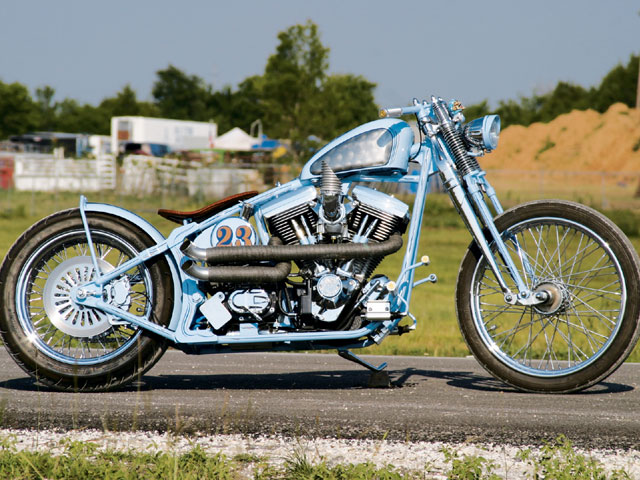 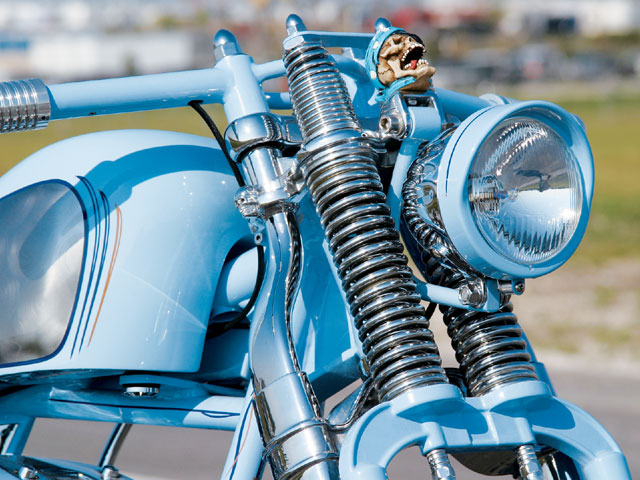 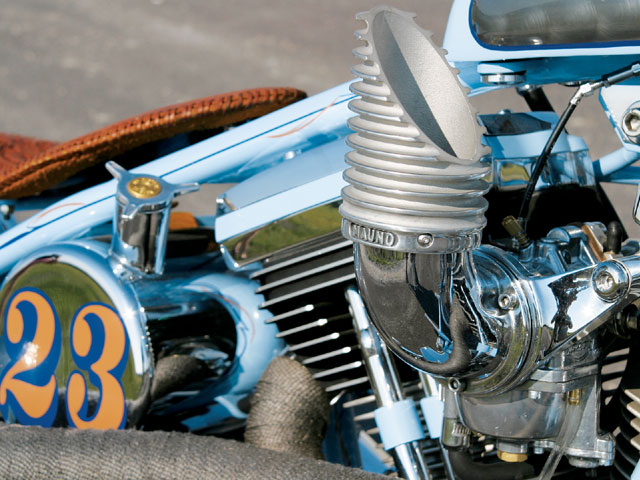 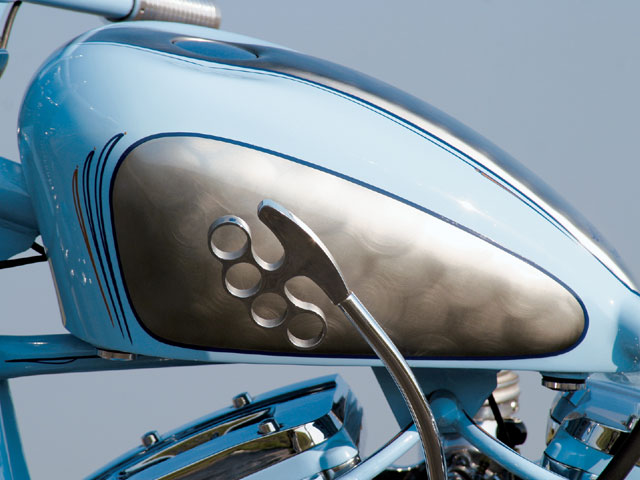 After owning a custom shop for only a few years, Roman Blum had two issues he needed to deal with. The first was that his ever-encouraging wife, Silvia, had seen many bikes come and go, but so far she hadn’t been able to get a bike she could call her own. Whenever Roman said he was going to start building her a bike, customer bikes invariably sidetracked him. The second problem was that several parts were sitting around the shop for other projects or customers who never picked them up, and the place was starting to get a little crowded. He decided to kill two birds with one stone and began putting all the leftover parts next to a lift so he could start building a bike for his wife.

He knew two things were going to be important to his wife: She wanted the bike to be comfortable, with a low seat height, and she wanted it to be blue. This left Roman and his team at RB Customs (RBCC) a lot of room to work with. They had an Ultima Softail-type frame without a swingarm at the shop with 34 degrees of rake and a couple inches of stretch in the downtube. Roman had an H-D swingarm lying around that would be perfect for the project, because he knew it would be easier for Silvia to handle a bike with a narrow rear tire.

All Roman has done for the last five years has been ground-up customs, so he’s pretty familiar with how the process works. He also knows they are judged by overall stance and how detailed they are. All Roman’s bikes look different. He builds everything from bobbers like this to Pro Streets, hot rods, and wide-tire choppers. It was obvious from the beginning that this build was going to be the sort that’s done on weekends and nights when he could get away from paying customers’ work. The process was slow, but he knew he would need to make several parts by hand, including the air cleaner, exhaust, fender struts, gas tank, oil bag, handlebars, foot controls, taillight, license-plate bracket, intake, jockey-shift setup, and grips. Roman spent many an hour hand-machining all the parts needed, as well as fabricating all the sheetmetal parts. These parts and more are available to the public because Roman manufactures 15 of his own unique parts.

The nice thing about building a bike for Silvia as opposed to building it for a paying customer was that Silvia gave him complete artistic license with the bike-almost too much artistic license. Customers usually have what they want in their head, and builders try to please them even if it isn’t their particular taste. With this bike, Roman had ideas he had been saving up for years that finally became reality because time was no object. He wanted to put his best foot forward and really wow the public and his wife with a not-so-ordinary bobber.

The powerplant was going to be an Evo built up by John Koehnle from a significant pile of stock H-D parts. It has 80 inches of displacement with Ultima cases but has a few hidden surprises, so it gives a little more than the usual get-up-and-go. It has J&E; Performance pistons, an Andrews cam, JIMS lifters, and an S&S; G carb for plenty of power to get this little bobber moving. The tranny is a stock H-D matched up with an R-Max clutch and primary. The clutch was set up to accept a foot clutch, and the shifting was going to be a jockey-shift setup. At this point it became fairly clear that this bike was not only being built by Roman, but for him as well. Silvia could ride a jockey shift, but it wouldn’t be her choice. The bike started to come together; there were a few things that Roman just didn’t want to compromise on because of the coolness factor, and the jockey shift was one of them. He realized that this bike was as much for him as it was for his wife, and so he went all out on the hand fabrication, since he knew this was going to be a bike that was meant for riding. The bike came together slowly, with ideas being squeezed in between paying customers. In the end, Roman was proud of his work and was psyched to see Silvia go out and take it for a spin. Since that time, Roman has put the majority of the miles on it and has taken quite a liking to it. It looks as if he’s going to have to build another bike for his wife.

Roman has his own TV show on the SPEED Channel called American Biker, where he will build 13 bikes over a 13-episode series for companies such as the Dallas Mavericks, Crown Royal, and the World Series of Poker. The cool thing about it is that the bikes aren’t going to be theme bikes for the companies commissioning them; they’re going to be the ground-up customs that Roman is known for-and which happen to be comfortable, cool rides.