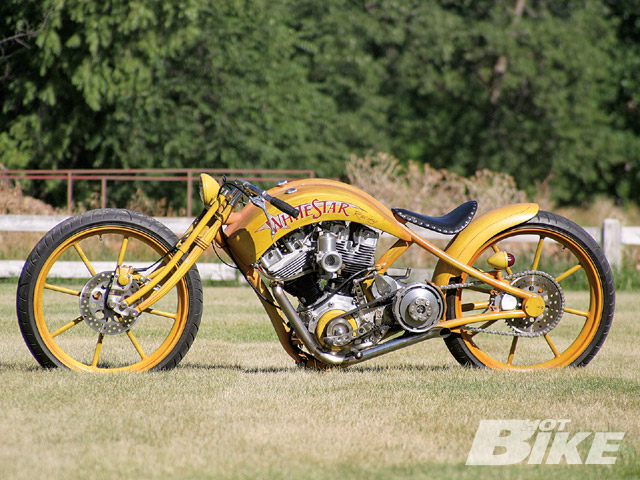 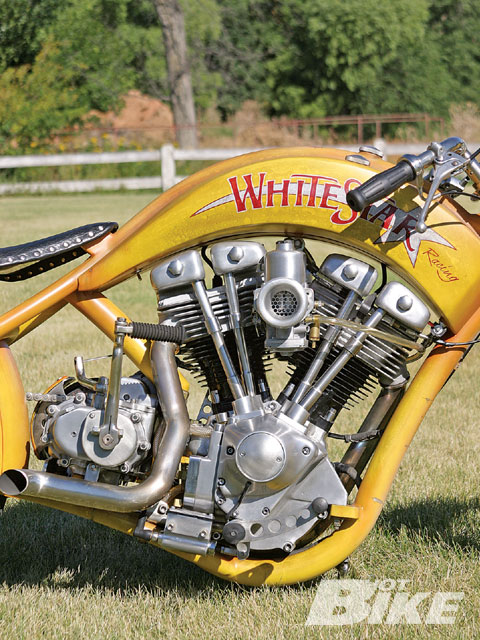 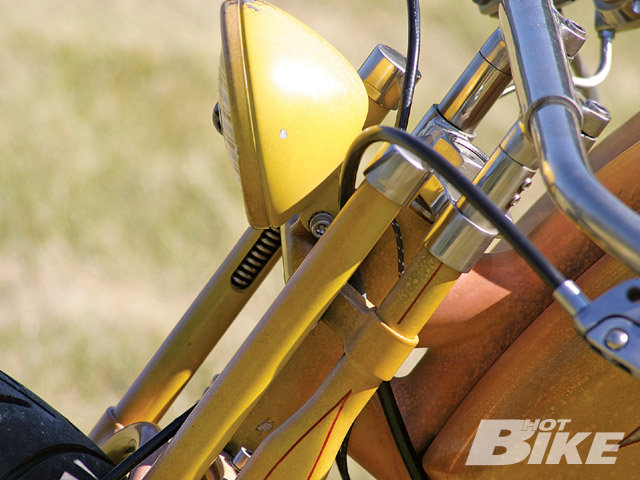 Gary Shields of Motorcycle Works spent hours on this internal springer frontend. Look closely; Gary hid the springs inside the fork tubes. Denny was more than pleased with the results. 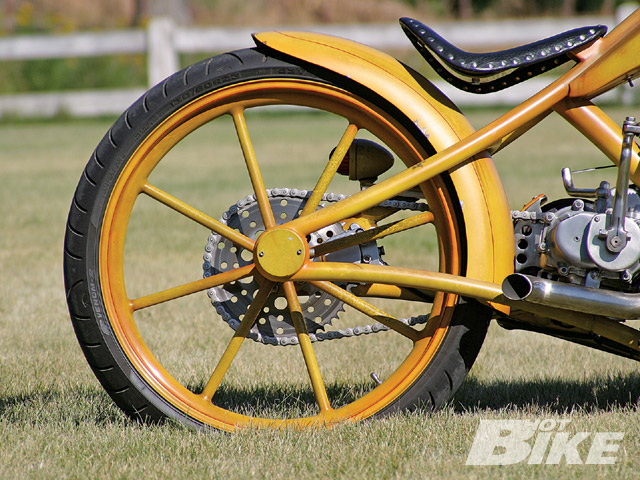 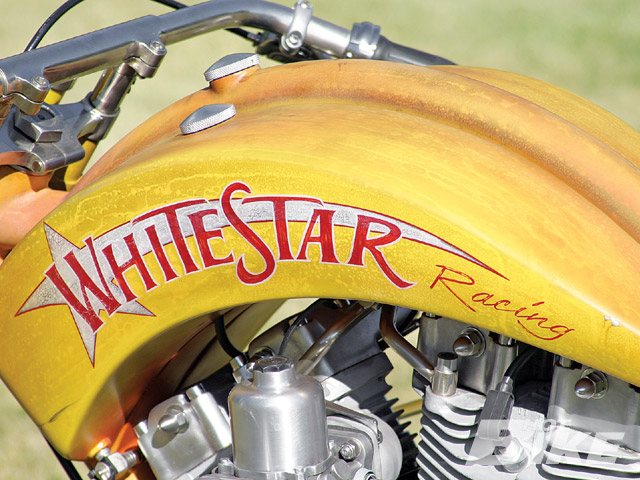 It just made sense to call the bike White Star Racer since Denny lives on White Star Farm and owns White Star Construction. 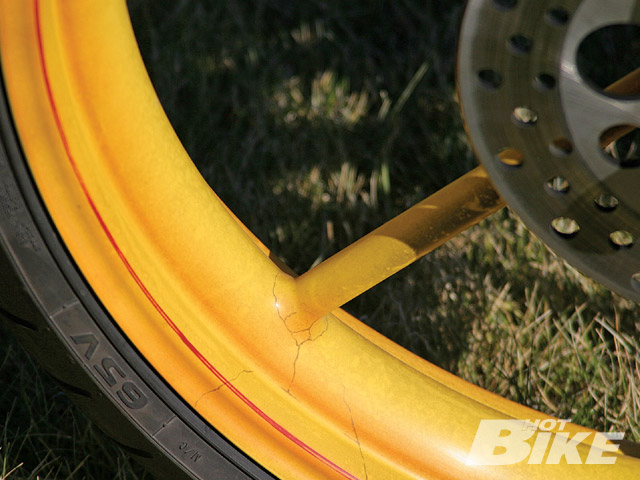 No the wheel’s not cracked. Denny had painter Bill Duncan incorporate tiny little cracks throughout the bike for more of a vintage look. It worked! 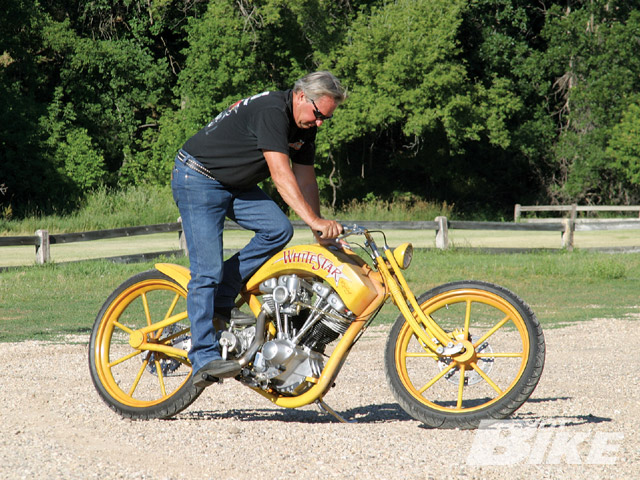 Seamless and simple, the seat was made to do just what it was made for: sitting. No flash, no frills, no bullshit; just bull hide.

Denny Smith likes working with his hands. Whether it’s wrenching on bikes or taking care of the day-to-day operations of running White Star Construction, both trades require a certain amount of hands-on skill. We’re not sure how much time Denny spends hammering nails since he’s the owner, but in order to run a successful business for 30 years, he had to get his start somewhere, and we’ll bet it included using his mitts. Just check out the next few pages of awe-inspiring details and you’ll see what we’re talking about with Denny’s one-off vintage boardtracker, “White Star Racer.”

Denny started building hot rods in the mid-’60s, and toward the latter part of the decade he bought his first bike, a ’61 FLH for $350 and chopped the hell out of it. He was hooked, and from then on he’s built numerous pro-streets, custom baggers, and of course, more choppers. For this project he went with the boardtracker platform and put a pen to paper in 2005, sketching up a rough cut of what the White Star Racer would ultimately become.

Denny wanted this bike to be a rider and with so many ideas swimming through his head of where to begin, he started-of all places-with the tires. He bought the set of 23-inch rubber skins, but there was a problem; he couldn’t find the right wheels to wrap them around. So he took a different approach after finding a set of rims and blank Harley hubs. He sent the components out to be custom made with a sketch of what he was looking for and the finished product is very nostalgic with a wagon-wheel aesthetic.

When Denny got the custom wheels back, he called up the crew from Motorcycle Works in Pleasanton, Kansas, and fabricator Gary Shields got to work on building an internal Springer frontend-springs are hidden inside the front fork tubes-to fit this wheel/tire combination. Once the custom Springer was finished, Denny and Frank Pedersen, owner of Motorcycle Works, laid out the frontend, wheels, tires, a shovelhead engine and a four-speed transmission on a piece of poster board to get the correct rake and trail for the frame, then drew the bike to scale. Frank and Gary built the single down-loop frame and incorporated the oil tank into the frame. The battery coil and electrical components for the bike are mounted in the frame, but the right rear portion of the tank covers it. Since it’s a split-tank design, the left side of the tank holds the fuel and the front right side of the tank houses the reserve fuel.

The motor was modified and rebuilt by John at Simpson Cycle. The rocker boxes were split, modified, and reshaped. The heads were ported, polished, and modified. If you look closely at the jugs, you’ll notice the cylinders are the same. That’s because John used two rear cylinders. He rotated one of the rear cylinders 180 degrees and relocated it to be used as the front cylinder. Once the motor was placed in the frame, Denny fabricated two intake manifolds to run SU carburetors, one on each side. For rear suspension, he added a piece of leaf spring to support the seatpan and upholstered the saddle with bull hide, surrounding the trim with nickel rivets.

Finally, to achieve that country farm feel, Denny gave the bike to Bill Duncan to have his way with the paint. “I wanted the paint to look old, like it could have been a barn find. Bill Duncan got that accomplished,” Denny said. There are strategically placed cracks that have been incorporated into the paint to give it a rustic look. Denny told us that while he was at a bike show, someone concerned for his safety pointed out one of the cracks in the wheel, Denny simply smiled, knowing that Bill had done a great job.

We came across Denny’s boardtracker at the ’08 Official World Championship of Custom Bike Building in Sturgis and knew it would be a good fit in our magazine. Denny was stoked to be involved in such a prestigious bike show. “It was an honor for me to be invited to enter the AMD show. I received the 2008 Achievement Award from Big Dog Motorcycles for going against-the-grain; non-big tire, non-billet, and it’s a rider,” Denny said. It’s definitely a rider because we watched Denny kick it over and burn up the asphalt while we snapped a couple pictures of him doing so. He put over 1,200 miles on the bike from the time he finished building it to the time he entered into the AMD show, and he’ll continue to put more and more miles on it.

Have you ever seen and wondered why there is a bell hanging from motorcycles? I thought that everyone knew why, […]