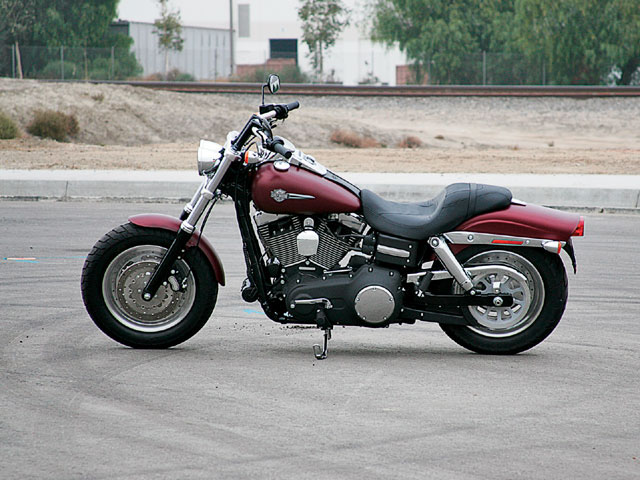 “I found myself throwing this bike into corners, jumping curbs, and splitting lanes like a madman.” “The generous power and sound of the 96ci motor was present, which gave me the confidence to pass anything and everything.”

As the newest member of the Dyna family, the FXDF Fat Bob was aptly named after the signature Fat Bob tank found on so many stock Harleys and aftermarket customs. What better way to pay tribute to such an archetypal component to theV-Twin industry then to create a model that encompasses the Fat Bob style? The FXDF is powered by the 96ci Twin Cam Electronic Fuel Ignition motor finished in black with polished accents throughout the power plant, and the power is plentiful. The torque and horsepower are present in the higher rpm ranges and the sixth gear from the six-speed Cruise Drive trans made for a smoother ride once at highway speeds.

Harley’s aggressively styled Fat Bob features dual four-inch headlamps housed in between the polished aluminum trees, and the thick, meaty front and rear tires wrap around the Slotted Cast Aluminum wheels. The trend-setting Fat Bob Tank mounted on the backbone houses 5.1 gallons of fuel, making gas stops few and far between. A key component on the Bob is the 2-into-1-into-2 Double Barrel “Tommy Gun” style exhaust system featuring the slotted shield located just beneath the redesigned air cleaner cover. A vintage element is present with the rear shocks wrapped in the all-encompassing Full Metal Jacket shock cans, reminiscent to the FLHs of yesteryear. Harley-Davidson describes the Fat Bob as a “bold street presence.” A bold street presence indeed with a 28-degree fork angle, the Fat Bob pulls no punches and handles with ease in the corners of freeway on- and off-ramps. We assumed the chunky tread on the 130mm front and 180mm rear tires would inhibit handling, but Harley was one step ahead in the design process because it hugged the tightest U-turn type hairpins. The FXDF’s bobtailed fender is aesthetically pleasing and it sets the bike apart from many others in the Dyna family since it’s only found on one other model, the FXDWG Wide Glide.

The specific model we received was fitted with mid-controls, which is a no-no to some riders (big guys), but also available is the forward control option. The mids in this case were comfortable and the accompaniment of the black drag-style bars, which made the riding position for an average male at 5-feet, 10-inches a good fit. As a whole, the HOT BIKE staff was pleased with the Bob. Follow along and check out their input.

I really enjoyed this bike. It had a great mix of everything: looks, performance, and handling. At first wasn’t too sure about the mid controls; I thought I was going to be too cramped. I know I’m not a giant, but I spend a lot of time on bikes with forward controls, and felt confined when I first got on. But after the first ten miles, I realized the ergonomics of the bike made me feel very relaxed and comfortable, especially when lane splitting. A good portion of my 45-mile commute is spent cutting between lines of cars. One of my critiques on any of the test bikes we get is how safe and confident I feel taking a bike between the lanes, knowing that I may have to react to someone trying to jump in or out of a lane at the last minute. The Fat Bob passed (pun) with ease. It was agile and steady on its beefed-up tires. And despite its moniker’s reference to someone’s heavyset Uncle Robert, the FXDF was quick to respond to dodging and weaving and was easy to punch and tuck into the corners. In fact, it was a little scary sometimes because I felt so confident on the bike I felt indestructible. The 96ci TC power plant propelled the 700 pounder with some pep in its step, smoothly accelerating to freeway speed with ease. I really dug the looks of the fattened up drag-style bars, black lower legs, and dual headlights, a mix between minimalist and industrial-seems to be more of an adopted theme with H-D these days.- Eric

At first glance I thought to myself “I am going to look like I am riding a mini-bike on this thing.” Usually when I see a bike with mid-controls and a “sitting up straight” riding position it is a little bit intimidating. It looks like it is going to be cramped, but surprisingly enough, the Fat Bob doesn’t feel that way at all. The new Fat Bob kind of feels similar to riding a very heavy motard bike-like a KTM Duke or some street/dirt hybrid with a couple hundred pounds strapped to it. I found myself throwing this bike into corners, jumping curbs, and splitting lanes like a madman. The bike has confidence-inspiring handling in spades, and when you combine that with the 96ci Twin Cam and the sixspeed transmission it can be very bad for your driving record! Not that I got pulled over a couple of times on this bike…it is just something to keep in the back of your mind if you’re going to ride the bike to its full potential. And as far as the looks of the bike go, I dig the fat front tire and the dual headlights. But I think that Harley-Davidson has treated too many models to the semigloss paint already.-Courtney

To start, the bike is big and strong looking; almost as if it served a dual purpose of not only being ridden on the street, but it would have been fun to kick up some mud on a dirt road. With big meaty tires and lots of power, the Fat Bob had a good stance. The generous power and sound of the 96ci motor was present, which gave me the confidence to pass anything and everything. Once up to speed, the bike was smooth and the overdrive Sixth gear made it hard to not keep twisting the throttle. I liked the new dual fourinch headlights and the shape of the handlebars. The only thing I feel the bike could have used was a set of forward controls. I’m 6-feet 1-inch and about 235 pounds, so with midcontrols my legs were a bit crammed, making me want to sit back on the seat more to give my fat gut the room it needed. However, the bars were in a good spot, and let me lean back. If there were apes it would have been even better. Overall, I liked the bike. It handled very well with lots of power and I was sad to see it head back to the fleet center. The good thing was we were told that we might get our hands on one more for a longer time to do some upgrades.-Ernie HB

Whether you’re a new rider or you’ve been riding for years, when purchasing a new bike there are many things […]

The Girls of Hot Bike