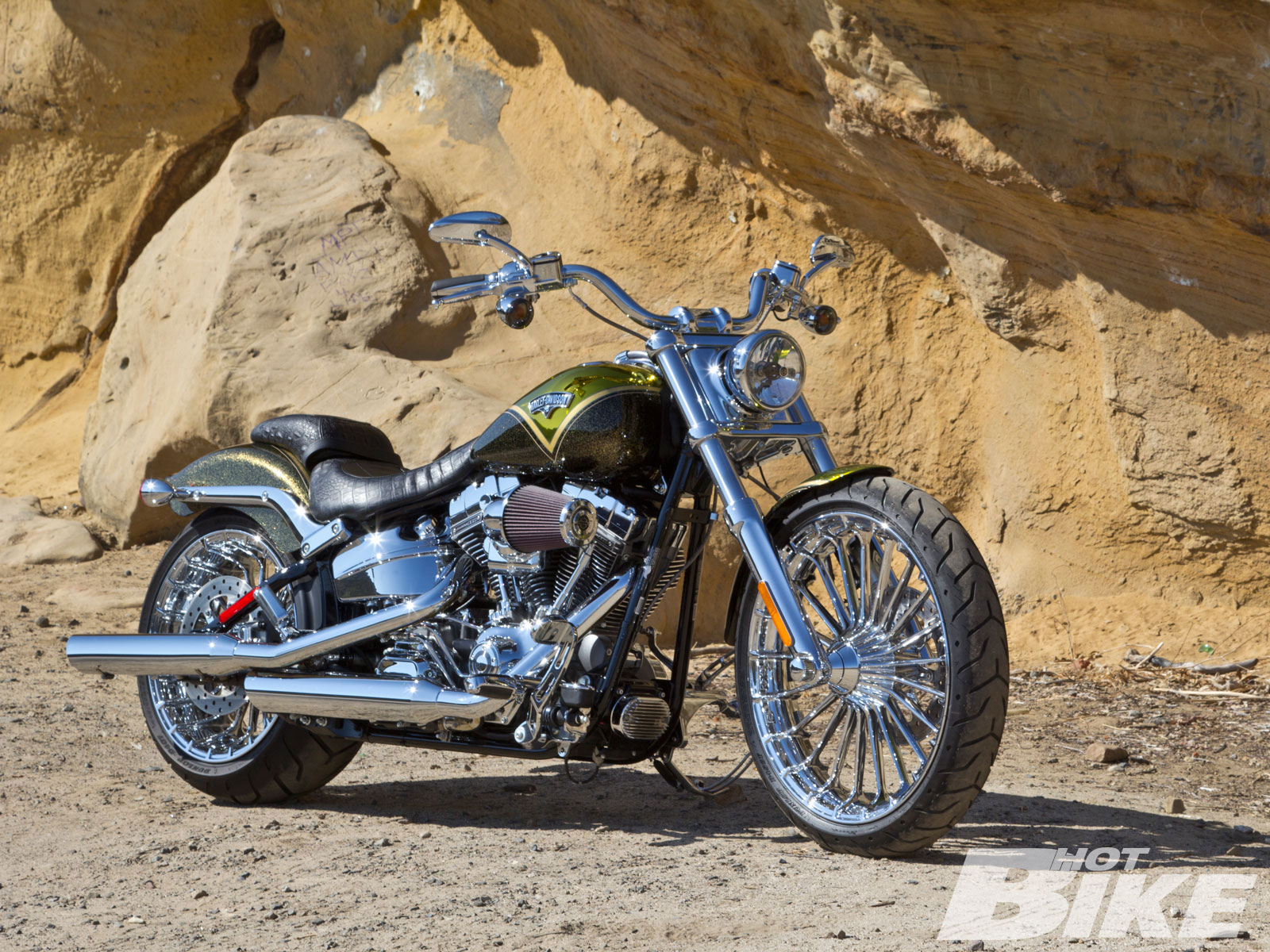 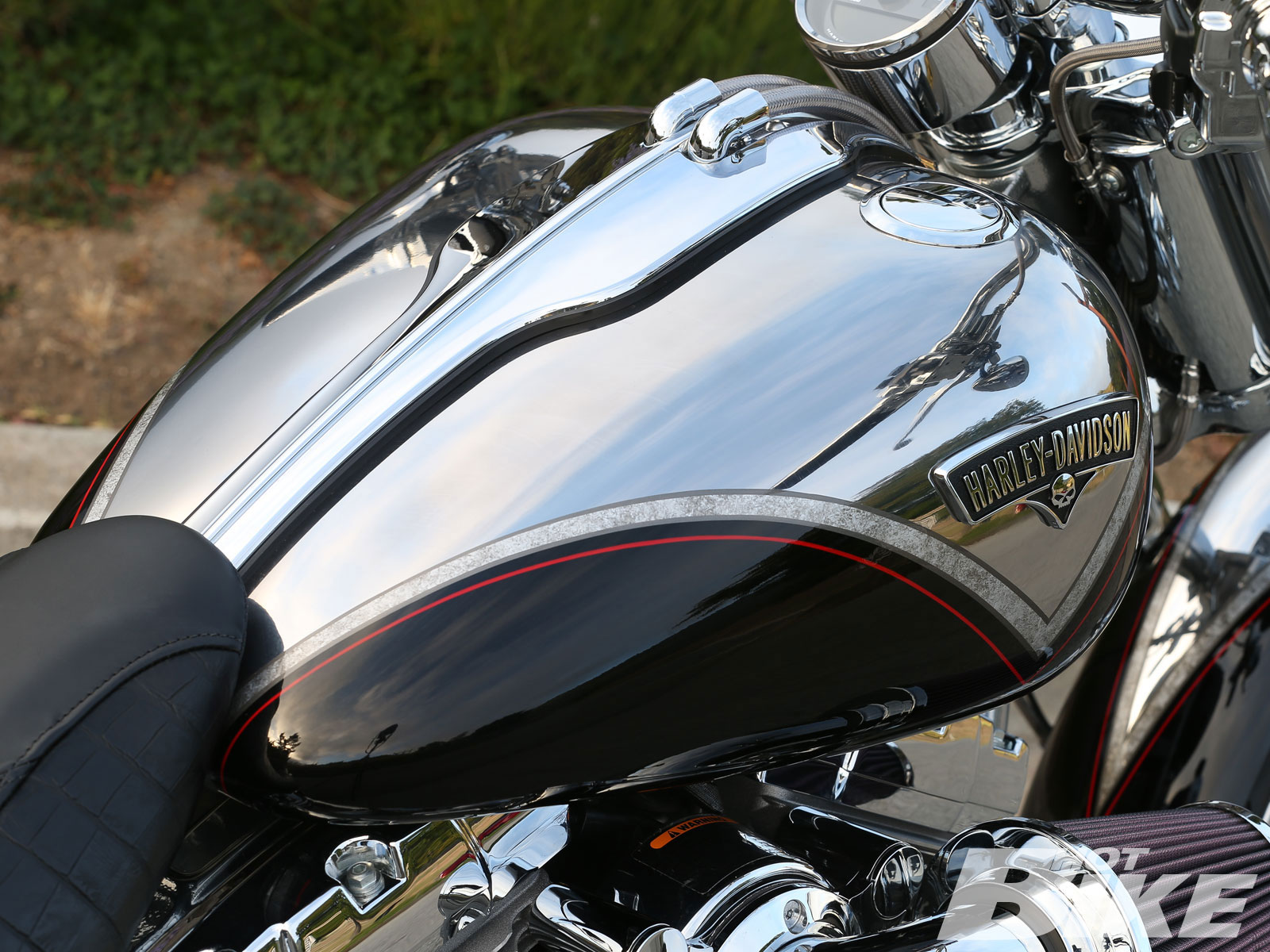 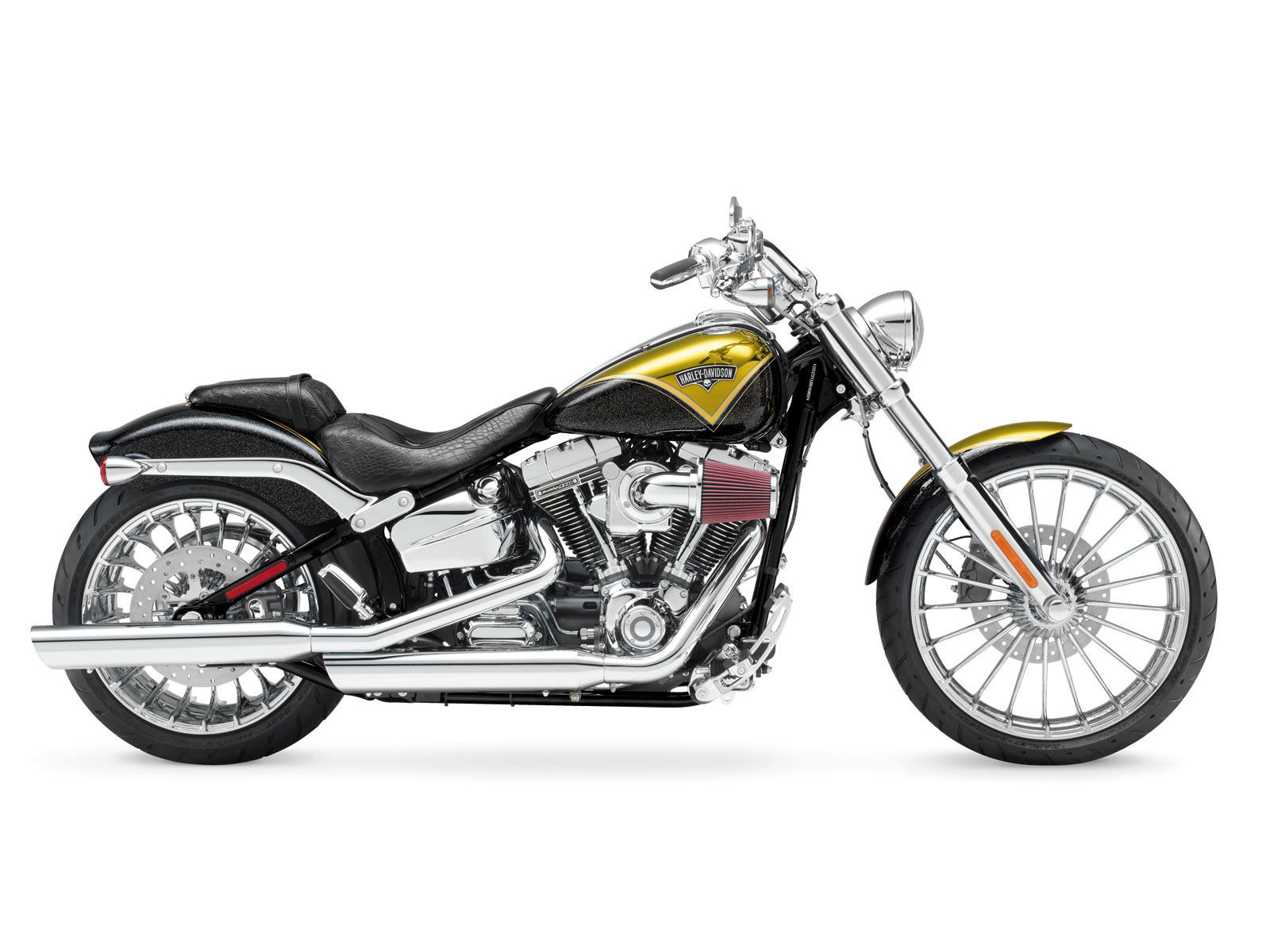 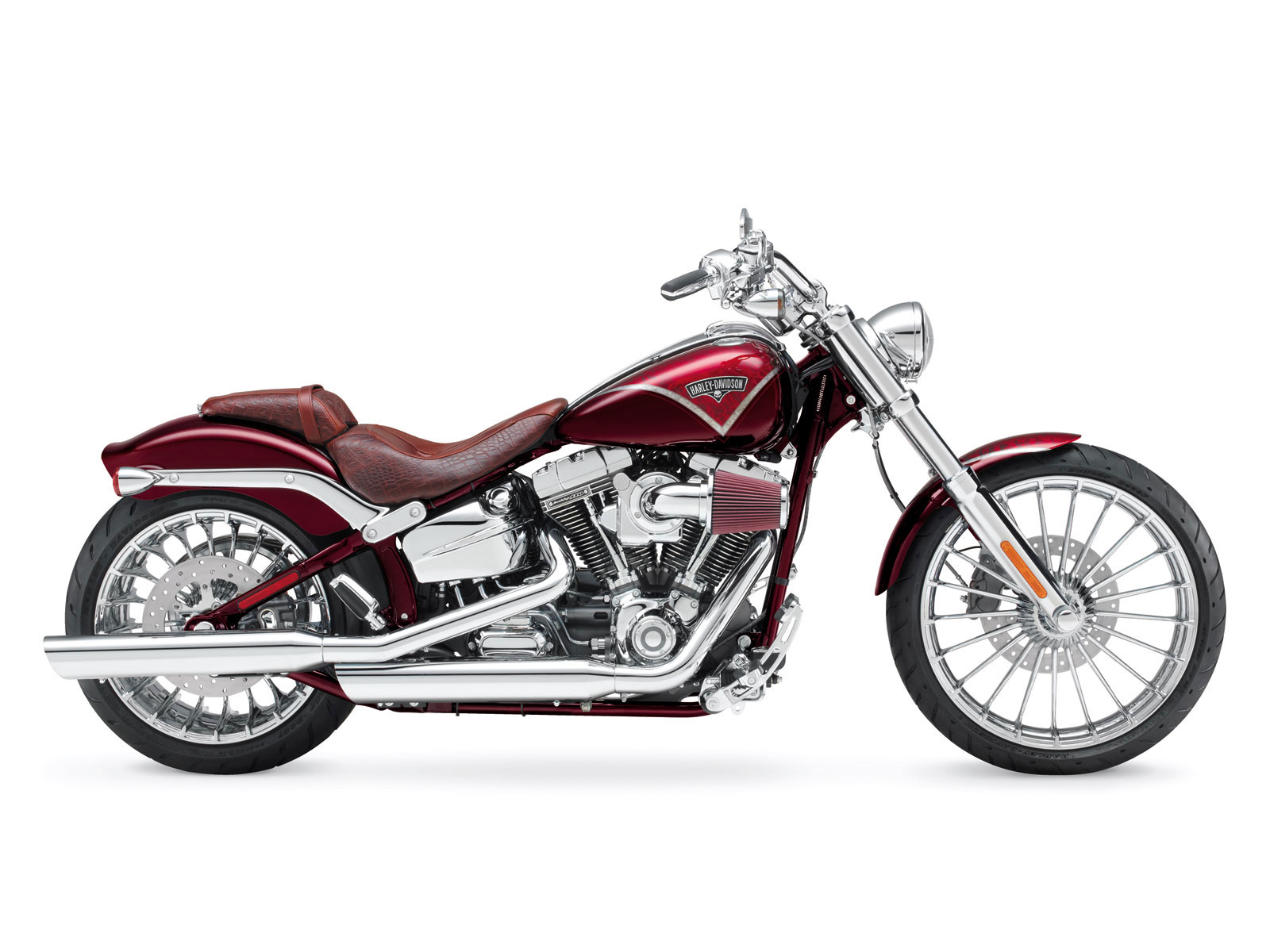 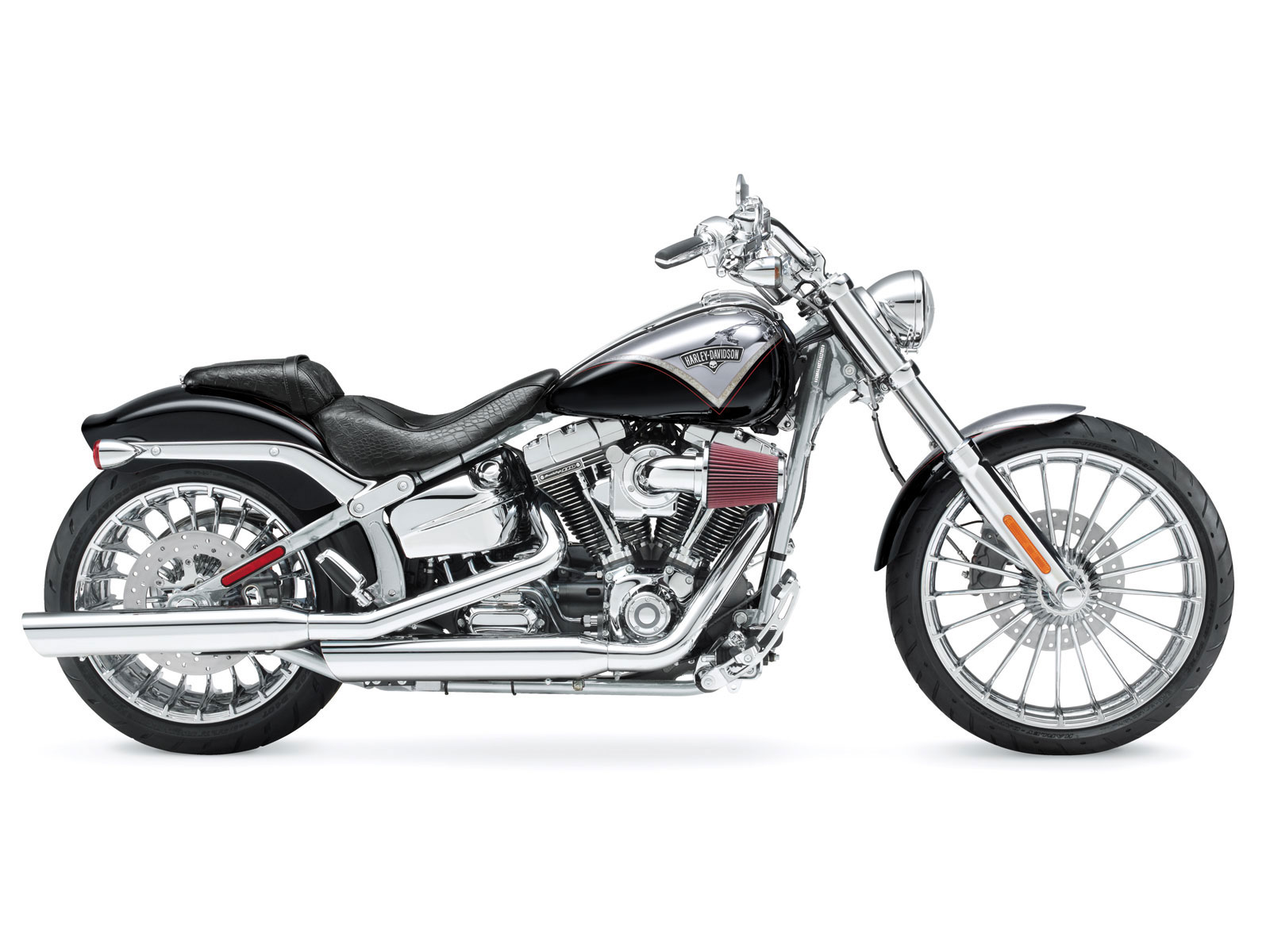 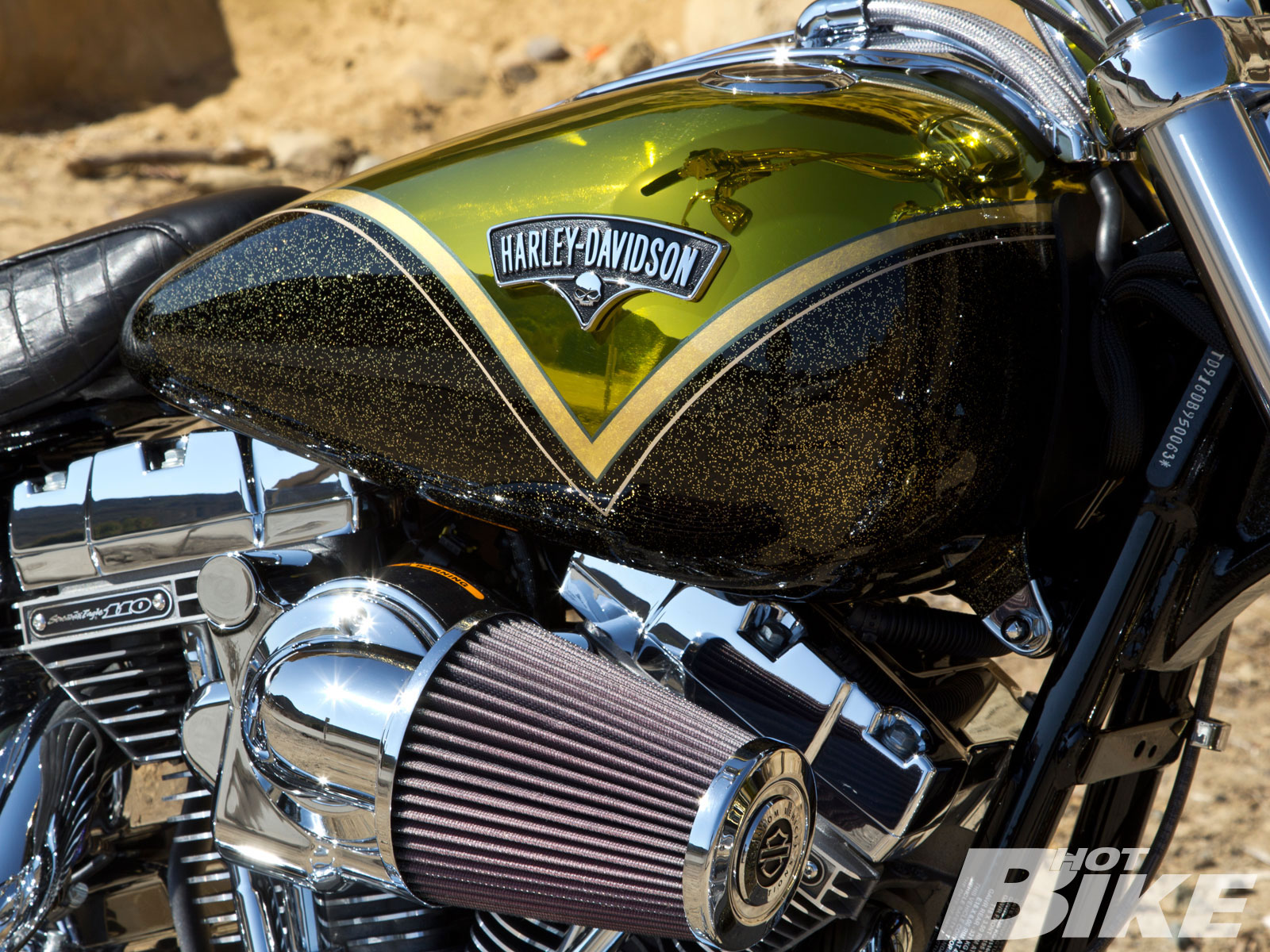 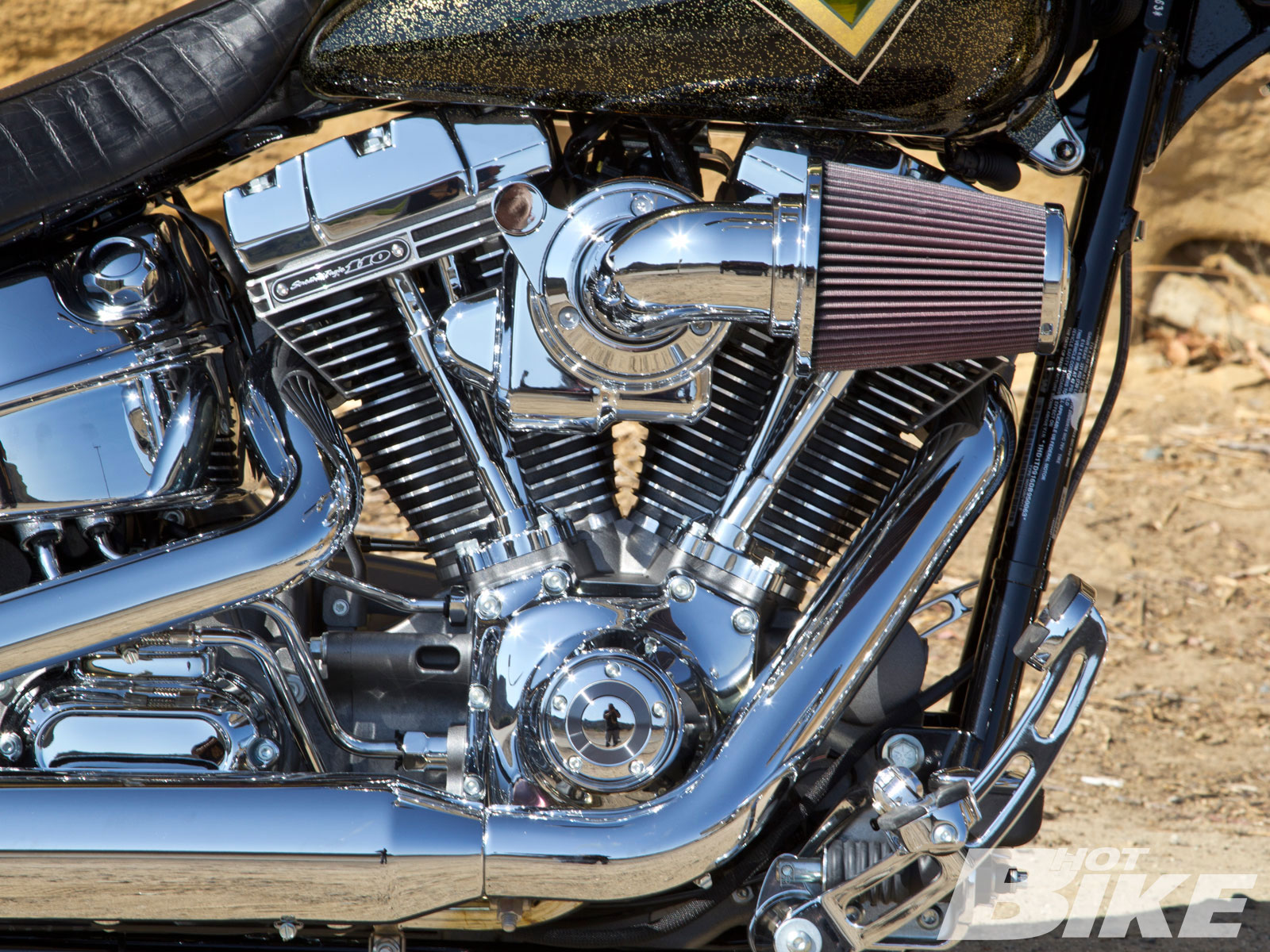 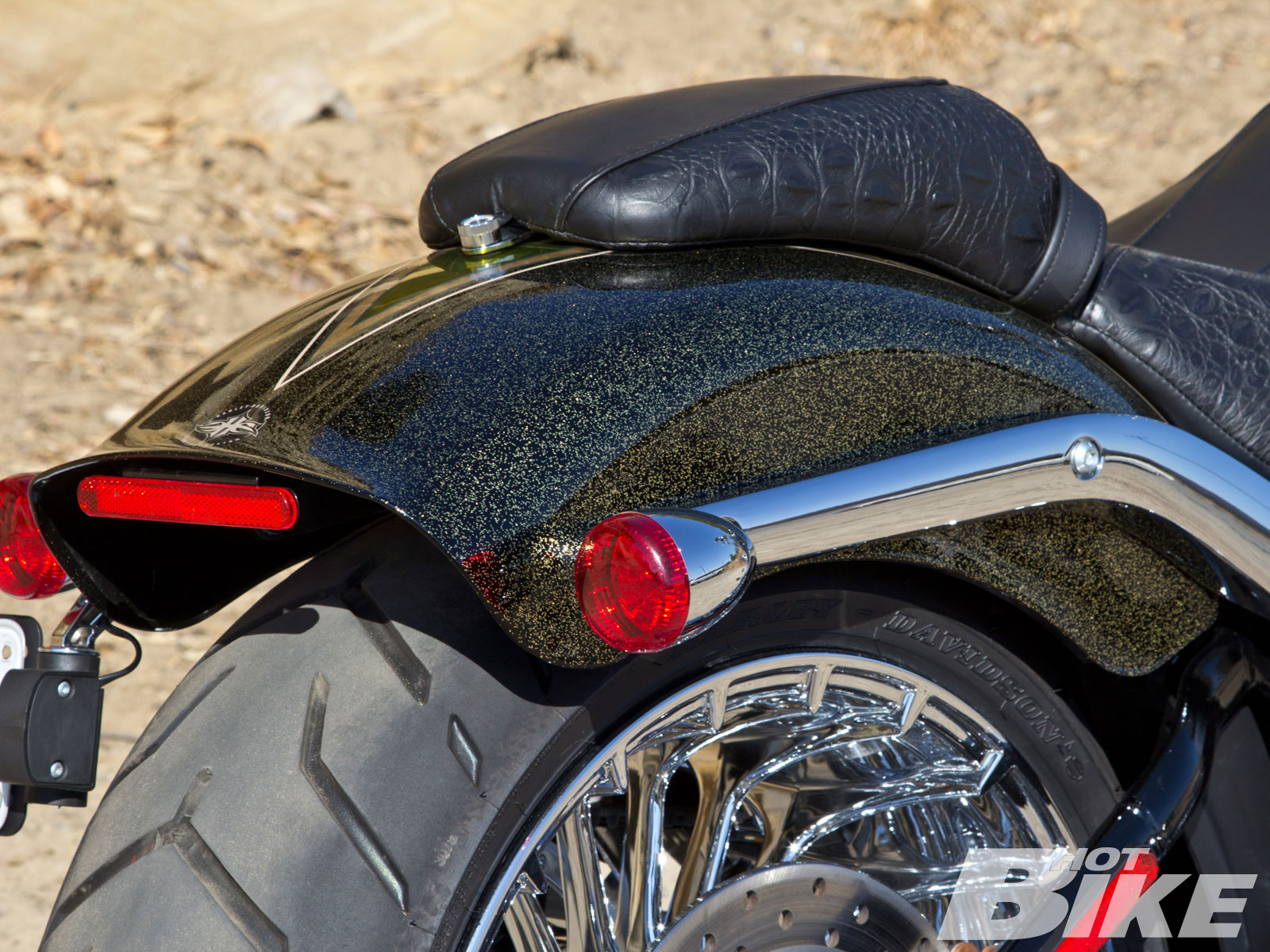 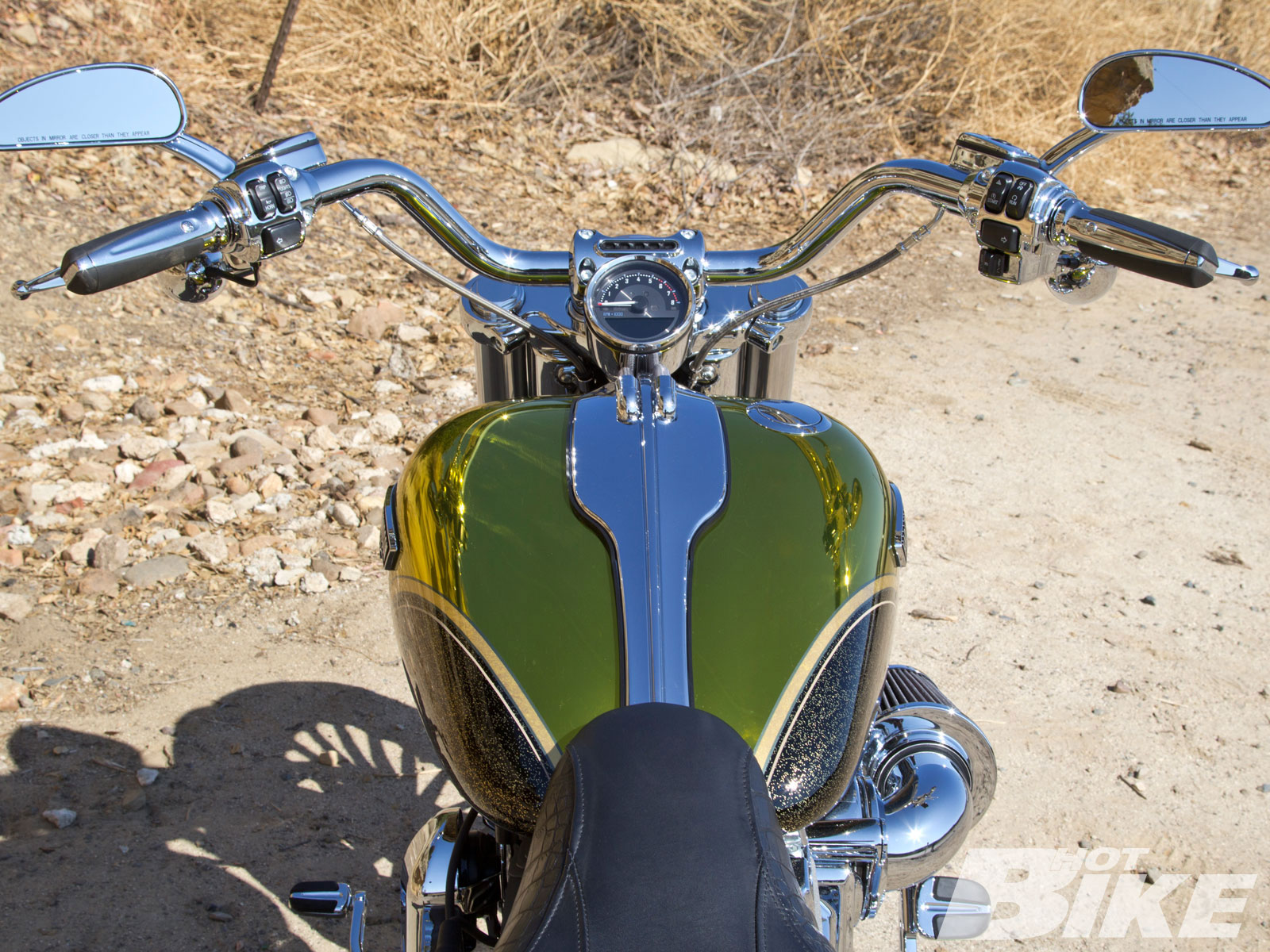 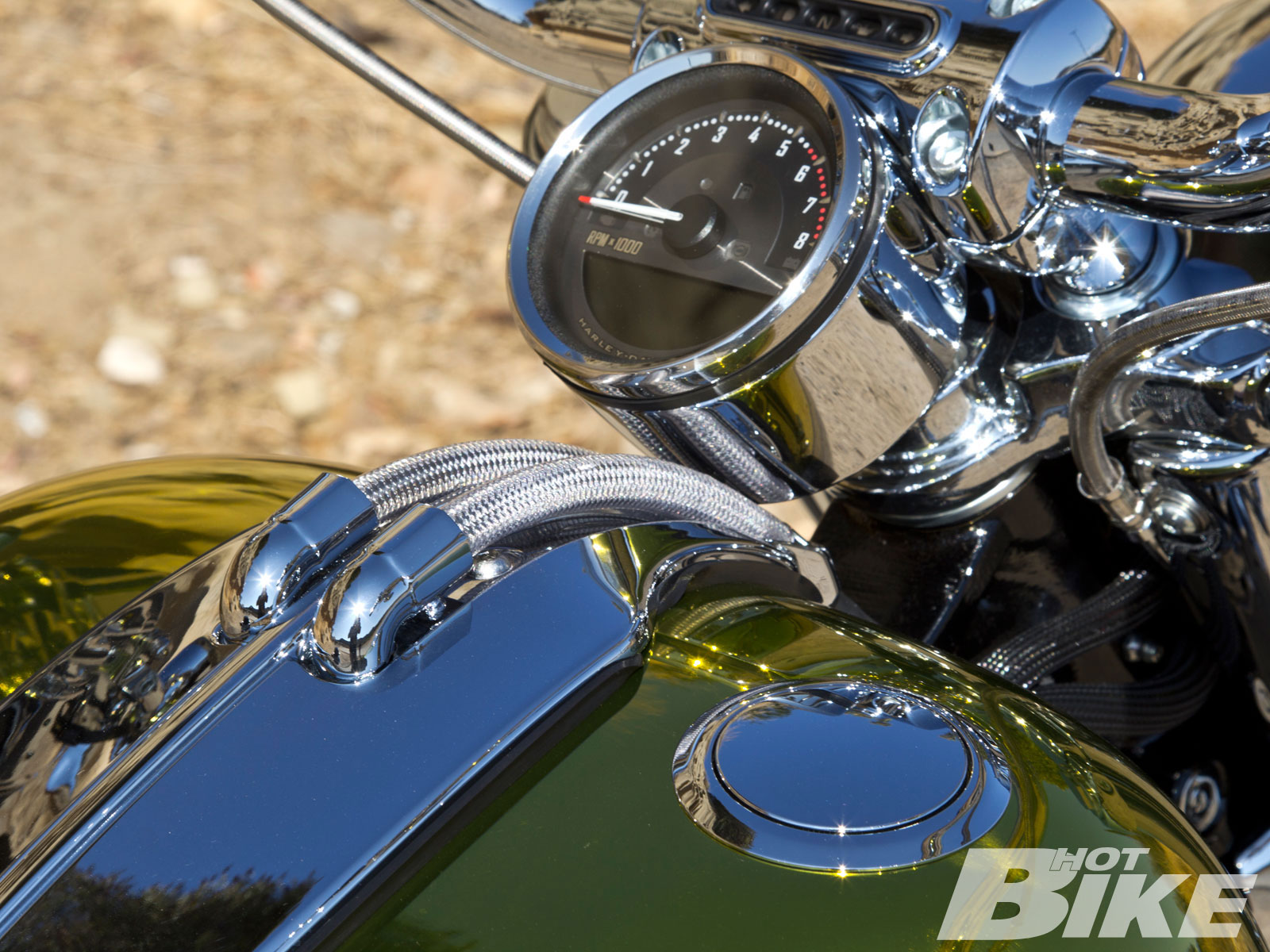 The Custom Vehicle Operations (CVO) line of motorcycles from Harley-Davidson represents the very best that the company has to offer. Each individual model represents the flagship of the company and stands to show what is possible with a custom. According to H-D, the CVO owner isn’t just the average bike buyer off the streets. No, the CVO buyer represents the alpha customer that is not willing to settle for anything but the very best.

It’s not often that H-D releases a new model to its upscale CVO line but for 2013, there is a new big dog running the streets with the release of the CVO Breakout. The Breakout is based on the Softail chassis with a laundry list of new innovations. Starting with a 110ci Twin Cam motor, the Breakout is rated at 112 lb-ft of torque at 2,750 rpm and has the highest power-to-weight of any of the current CVO lineup. Anti-lock breaks, cruise control, and keyless ignition all come standard along with the H-D security system.

Starting at the front, a new 21-spoke, 21-inch turbine-inspired wheel wrapped in a 130mm front tire spins like a diamond-studded roulette wheel going down the road. A new wider all-chrome 49mm frontend with chopped front fender give the rim maximum exposure and is wider than the previous FX Softails. Out back, a rear chopped fender showcases the massive 240mm rear tire proving that the wide look isn’t dead yet. In order to achieve a long, low, and lean look, a new ultra-low profile tank console was used with two braided stainless steel lines looking more like art than vents. Long, wide 1.25-inch handlebars house a 4-inch digital speedo/analog tachometer. A faux alligator skin leather seat finishes off the look. We find the pattern garish and think it’s just too much coupled with the chrome and metalflake paint set. The seat, as well as the whole bike would probably look better with something more sleek and subtle. But what separates the Breakout from the rest of the H-D herd are the aforementioned custom paints schemes. Available in silver, green, or red, each color is quite unique in its appearance. The mirrored finish of the Black Diamond and Molten Silver is achieved thanks to a 10-step hand sanding, three-step polishing process that is sealed with a special clear. The result is a black chrome industrial appearance that is clean and classy. For those that want something more daring, the Hard Candy Gold Dust and Liquid Sun and Pagan Gold (green) model is by far more striking. Using the same polishing techniques, the paint is taken a step further with a hard candy greenish clearcoat that pictures can’t do justice. Old-school painting techniques from the custom world were used with the Crimson Red Sunglo version that sport a black candy lace pattern over a silver base that is unique to each bike. So what’s it like to ride the Breakout bad boy? With no key to plug in, starting the bike is as easy as flipping the ignition switch and hitting the starter. As soon as the motor fires to life, it explodes with a definitive growl that is more aggressive than a standard Softail. Feet forward controls click the six-speed from N to first and with plenty of power from the 110ci twin to get the chrome 21-inch turbine wheel to start spinning and the action quickly gets underway. Despite the fat 240-rear tire, cornering action feels nimble and precise while still having the custom look deserving of a CVO. A pair of 11.5-inch floating rotors in front and out back does need to be used aggressively in conjunction to stop the bike in panic situations. But standard anti-lock brakes make sure you don’t get too greedy with the left lever. The Breakout is a sure head turner and commands attention whether cruising down he road or gassing up at the pump. Be prepared to constantly repeat, “No it’s not a custom. It came like this from the factory.” Exclusivity doesn’t come cheap with a MSRP of $26,499 but is still the least expensive entry into the CVO club with only 1,900 units available for sale worldwide. HB

AMG has long been recognized as the premiere line of Mercedes Benz cars and SUVs. In 2012 Ducati partnered with the German tuners to release the AMG version of its Ducati Diavel. The Diavel has a 1,198cc L-twin motor that produces a claimed 94 lb-ft of torque with a whopping 162 hp. With a unique styling unlike any other motorcycle available, checking off the AMG box gets you cosmetic upgrades including AMG’s signature five-spoke wheels, carbon-fiber radiator grills, special exhaust, numbered plaque, and cam timing hand set by a certified engine technician with his name engraved on the engine case.

Riding the Diavel is a bit like getting a piggy back from a prize fighter with the discipline and refinement of a well-trained boxer combined with the guts and the rawness of a street brawler. Once in close proximity of the bike with a specially designed remote control key, a push of the ignition brings the dash to life with a choice of three modes of power and a wealth of information. A low seat height makes it a good choice for the vertically challenged and places the rider smack dab in the middle of the mad machine. Power delivery is quite aggressive and the L-twin tends to bark with each blip of the throttle rather than the standard growl. There’s no waiting for the power to arrive as the bike leaps and jumps into license-losing speeds before you can say, “Damn that’s fast.” Corner clearance is a non-issue and the 240mm rear tire feels right home and easily handles what most riders can throw at it. The styling is hard to swallow for the average consumer with a wide, bulbous frontend leading to a minimalist street-fighter-inspired rearend hovering over a massive tire. With a price tag nearly identical to the CVO Breakout, the AMG Diavel is more geared towards the fish and chips crowd than the beer and dogs rider, but both bikes come with extra bragging rights that come with owning the top-tier models. HB