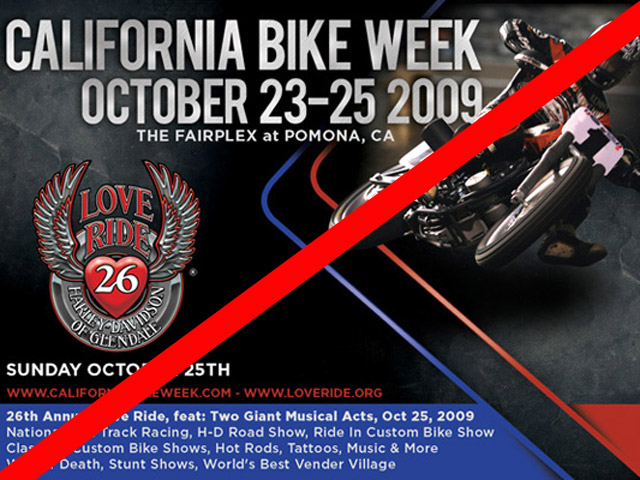 With all the rumors and false information spread across the internet via websites and emails we were a little skeptical this morning when we received an email about the 26th Annual Love Ride being cancelled–especially since we had gotten an announcement a few weeks earlier about Dwight Yoakam headlining the upcoming event. We wanted to make sure the cancellation was true so we contacted Glendale H-D marketing director Steve Fisher to get confirmation and he informed us that yes the event has been cancelled, here is the press release that was sent out.

Love Ride 26, slated for October 25, 2009, has been canceled. The announcement was made by Love Ride founder Oliver Shokouh, who cited the weak economy as the reason for the event’s cancellation. In place of the usual event, Glendale Harley, Home of the Love Ride, is sponsoring an autograph session with Peter Fonda and free movie screening, commemorating the 40th Anniversary of Fonda’s starring role in “Easy Rider.” The event will take place at the dealership (3717 San Fernando Rd. in Glendale) Friday, October 23rd from 4-10pm. Glendale Harley will also be selling Love Ride memorabilia (Love Rides 1-26) on Saturday, October 24th from 9am-4pm and Sunday, October 25th from 6am-2pm. The hope is to recoup some of the costs already incurred this year by the Love Ride Foundation. The dealership will also have representatives on hand to answer any questions. “This was a gut wrenching decision for me,” says Shokouh, who founded the Love Ride in 1984 and within a few years built it into the world’s largest one-day mortorcycle charity event. “I want to make clear that this has absolutely nothing to do with the Love Ride staff, volunteers or organizers. Everyone has worked hard for the past 25 years. Our problem boils down to one thing, the economy. The bottom line is that the Love Ride is a victim of the recession. We did a very careful analysis over the last several months, and realized that ticket sales weren’t enough to offset page 1 of 2 costs. Simply put, there would be no money left to help the kids, the sole reason for the Love Ride.” The Love Ride started back in 1984 as an event to raise money for the Muscular Dystrophy Association. As the Love Ride grew, the destination changed from Calamigos Ranch to Lake Castaic and then to the Fairplex. The list of beneficiaries also grew, from MDA to over one dozen children’s charities, including Autism Speaks. Last year’s Silver Anniversary Love Ride 25 drew thousands of bikers for the fund-raising motorcycle ride that featured an afternoon concert headlined by ZZ Top and the Foo Fighters. “Things were on track for continued growth, then the economy collapsed,” adds Shokouh. Circumstances turned against us. 2009 is simply not a good year for a charity event.” Shokouh was optimistic that the Love Ride would return, if not next year, then in 2011. “Times are tough, we’re lovin’ but not ridin’, at least not this year”, says Shokouh, who started his Glendale Harley-Davidson motorcycle dealership in 1976. “After 25 years of expansion, it may be time to return to our roots with a smaller, more intimate event. But we will be back.”