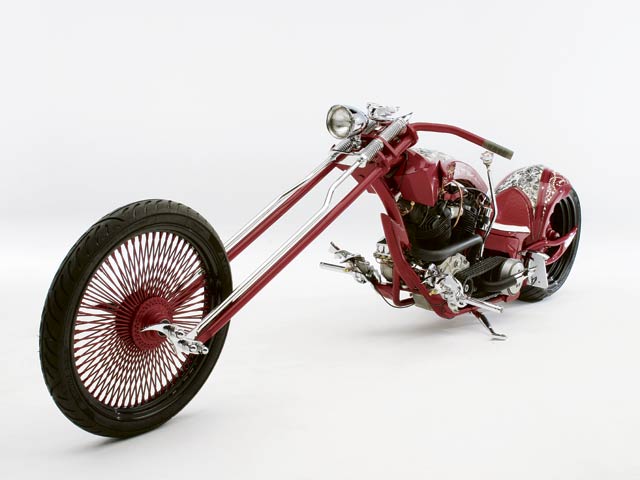 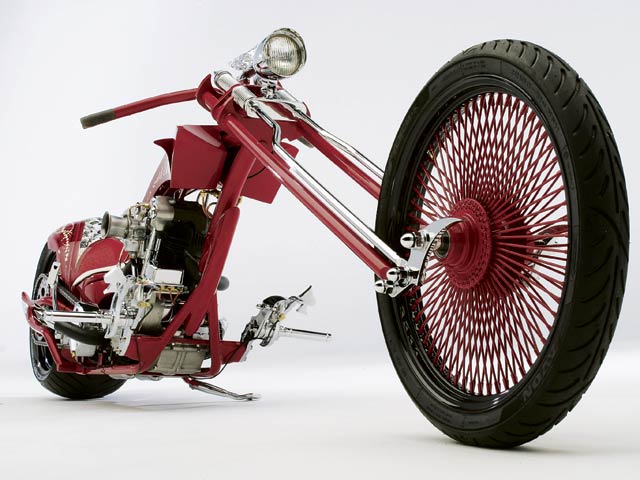 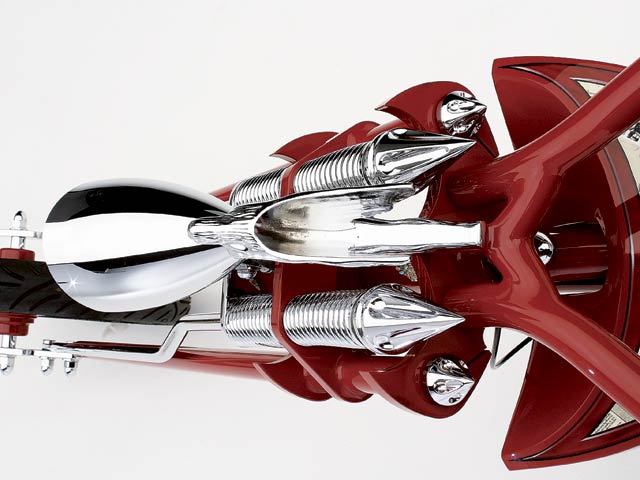 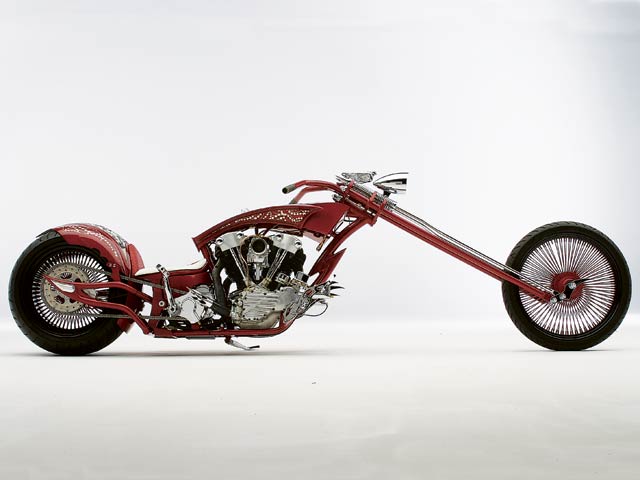 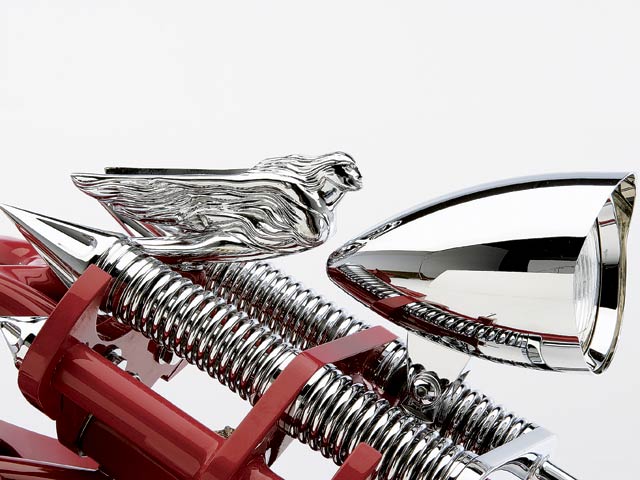 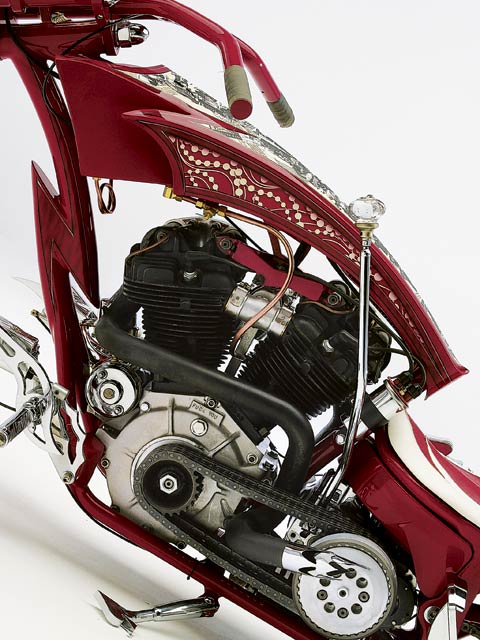 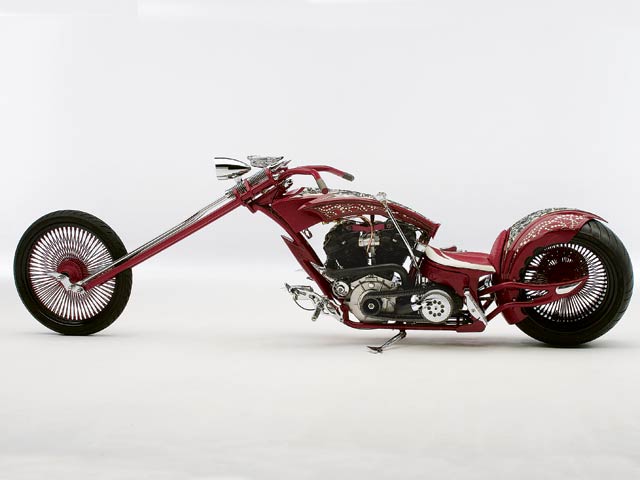 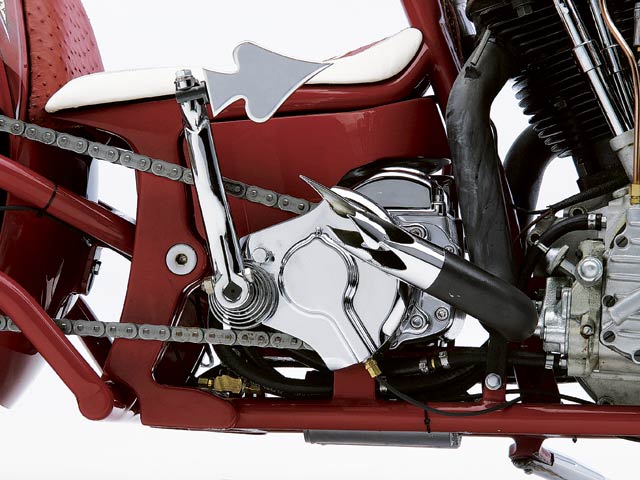 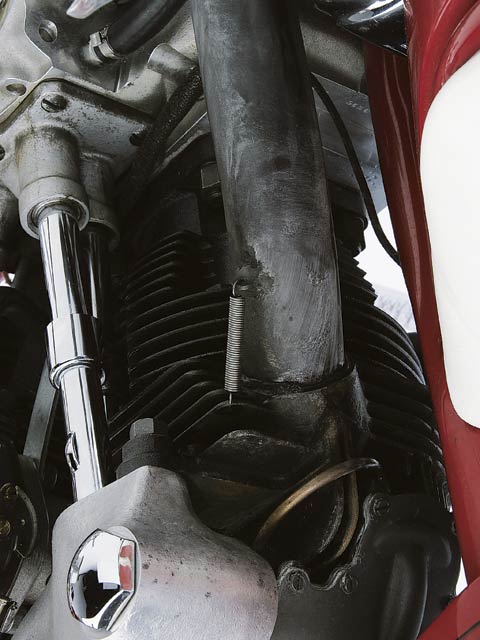 Kevin built the hottest line of unassembled custom motorcycles on the market since 1997, but the chrome gods demanded he demonstrate his one-off abilities. “I needed to build an in-your-face, over-the-top, pure radical custom to show the world what I’m capable of,” Kevin Alsop, of Big Bear Choppers, said of this radical Knucklehead. He sells between 100 and 130 complete unassembled motor vehicles a month.

“I went after all the government agencies to ensure our customers receive a motorcycle with complete VIN numbers (unassembled MSO), not individual component MSOs, so they aren’t forced to register Big Bear Bikes as special construction.” Each model is equipped with EPA-approved exhausts, venting canisters, DOT-tested brakes, and vented gas tanks, as approved by the California Air Resources board. Each vehicle carries the required certifications. “Ultimately, the complete motor vehicle VIN number affords buyers more available financing, insurance, and registration ease.”

“But that’s not what sells these bikes,” Kevin pointed out. “It’s the style, quality components, and parts that match the design. I sell 50 percent direct and 50 percent are sold by Custom Chrome through its dealer network.”

Kevin dropped into California from an Australian flight in 1989. By 1994, according to his wife, Mona, “He had a desk job, a business card, and wore a tie.” The next thing she knew, he dropped the business garb for a three-piece patch and became a full-time biker. In 1997, Mona and Kevin were married and escaped big-city society into the small mountain community of Big Bear, California, where they kicked off Big Bear Choppers. It’s been non-stop ever since.

“I fight the personal conflict between being an artist/builder and a businessman daily,” Kevin said, holding that classic Knucklehead engine as if it was his baby. “I went from changing tires on the floor of my shop with screwdrivers, to building over a thousand bikes a year in less than a decade.” With Mona at his side, they’re moving into a 20,000-square-foot state-of-the-art manufacturing facility this year. It’s the only manufacturing joint in the 17,000 population mountain resort community, strewn with pine trees, manzanita bushes, squirrels, and rattlesnakes.

When asked about his goals for this year, Kevin answered like any self-respecting biker/warrior. “We’re launching a new bike called the Lead Sled, and a line of bobbers, dammit.”

BBC built its first Lead Sled and launched it on its website, bigbearchoppers.com, in raw steel, no paint or chrome, and sold 10 in less than two weeks. “We pulled it down and moved it to another section of the site. Production wasn’t geared up yet, but they continued to sell,” Kevin added. “It’s a drop seat, low, wide, and long classic BBC.”

This year BBC will launch three more new models to bring its lineup to 12. “We build a custom bike, then the collection of components are tested to create the unassembled custom,” Kevin said. “Not the other way around.”

Regarding the Punk-Assed-Bitch Knucklehead, “It’s an attention-grabber,” Kevin said. “We’re not a lumbering, giant corporation. We can dance on the balls of our feet. This is a kick-my-ass custom bike for the show circuit.” Kevin developed several wild notions for this one-off bike, including the Sportster-style kicker. There is no electric start. And check the out-both-sides, winged exhaust system, sporting two wild-pipe tips made with a four-axes plasma cutting device. Kevin calls it the W rotation mill modified from a Z-configured head.

It must be something about that pure mountain air motivating Kevin and Mona daily to design and produce this level of assembled and unassembled bikes. We can’t wait to see one of their new Lead Sleds blazing along a mountain twisty. We’ll test one shortly. Watch for it in an upcoming issue.

Free Bike Shows at the Sturgis Buffalo Chip in 2017

Flashy chrome, crazy customization, new-tech engineering and old-school horsepower will all be on display at the Sturgis Buffalo Chip in […]

The Game of Fame – A Custom TPJ Leonor

“In the future everyone will have their 15 minutes of fame.” —Andy Warhol Ah, the allure of the spotlight and […]