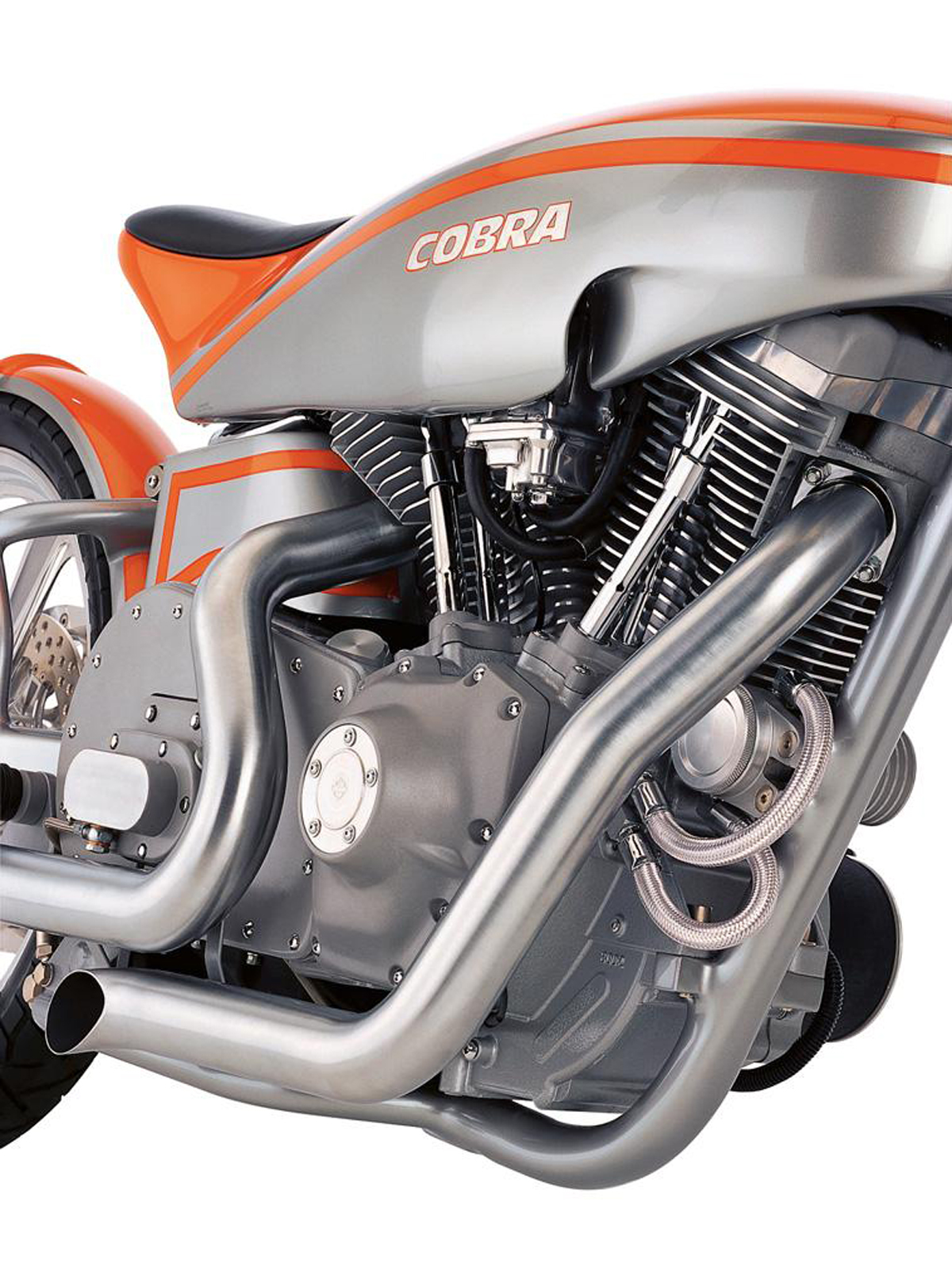 When: 11:00 a.m., Friday February 17, 2012
Where: Indianapolis Convention Center, Indianapolis, Cobra Booth
What: Cobra’s: 20 Years of Customs Retrospective, 20 ground-breaking custom motorcycles built between 1993 and 2011
**Who: **Cobra Special Projects Division Members Ken Boyko and Denny Berg (and special guests) will be on hand to talk briefly about a few of the more memorable bikes and will be available for interviews.

Cobra’s 20 Years of Customs
In the last 20 years, Cobra has built more than 40 custom bikes. And other than the five or six that Cobra gave away to a few lucky winners, the company still has every one. Now to celebrate 20 years of ground-breaking, forward-thinking motorcycles, Cobra Engineering is bringing 20 custom motorcycles to the Indianapolis Dealer Meeting.

This unprecedented collection of motorcycles is comprised of some of the best of the Cobra builds, from the very first metric Custom, a Honda 750 Magna called Magnafied, to one of the latest, the Honda RS750 Scrambler and a selection of everything in between.

So there then is a list of the bikes, in order from that first Magnafied:

Yorba Linda, CA: A lot of companies create custom motorcycles, and they do it for any number of reasons: showcase current or new product, show off their talent, sell them, and on and on. But there are few or no companies that have made as many or as varied a selection of bikes as has Cobra. In the last 20 years, Cobra has made more than 40 custom bikes. And other than the five or six that Cobra gave away to a few lucky winners, the company still has every one. Now to celebrate 20 years of ground-breaking, forward-thinking motorcycles, Cobra Engineering is bringing 20 custom motorcycles to the Indianapolis Dealer Meeting.

This unprecedented collection of motorcycles is comprised of some of the best of the Cobra builds, from the very first metric Custom, a Honda 750 Magna called Magnafied, to one of the latest, the Honda RS750 Scrambler and a selection of everything in between. And it’s fitting the first and most recent builds were based upon Honda motorcycles, because from the very beginning Honda became a willing partner with Cobra.

As Ken Boyko, head of the Cobra Special Projects Division, recalls, “Back in 1993 I set up a meeting at Honda with Ray Blank and Gary Christopher, the top Honda execs at the time. I told them that we wanted to build a couple of cruisers for a story in Cycle World as well as getting some bike show exposure. Blank said, ‘Sounds like an interesting project, what do you want from Honda?’ I told him all I needed was a couple of bikes, a VT1100 Shadow and a V45 Magna (Honda’s brand new four-cylinder cruiser). Blank repeated his question, ‘So what is it again do you want from Honda?’ I said, ‘Just the bikes, nothing else, no money etc., we’ll handle everything else.’ Blank and Christopher sort of winked at each other and said ‘OK, when do you want them?’ That meeting forged a strong relationship with Honda that continues to this day.”

Throughout, Cobra worked to use all the manufactures for their custom bikes. For example, Cobra built the very first Victory Custom, which is on display. Kawasaki was an early supporter as was Suzuki and Yamaha.

Another key partner with Cobra throughout the last 25 years was Cycle World magazine. Again, Boyko recalls: “In 1993 I was trying to convince Cycle World Magazine to do a story about our Cobra exhausts, but they told me that they really didn’t do exhaust tests. So I asked them if they would be open to doing a story on a fully customized metric cruiser that just so happened to have our exhaust on it. They said “Sure if it was cool and different.”

When Cobra got the stock bikes from Honda, the pressure was on. Boyko had Damon’s, a hardcore Harley builder in Brea, California build the bikes, but it wasn’t easy. Boyko: “When I first met with Richard and Tom to talk about what we wanted done, they both thought we were completely crazy, but said to each other, “Well it’s their money, and if that’s what they want then let’s build them.”

At that time, there were no catalogs brimming with customizing merchandise for metrics, which means that everything had to be fabricated by hand. As the Magna and Shadow project moved along, the folks at Damon’s admitted that they liked the bikes more and more. Both machines were finished in January of 1994, just in time to take to Cincinnati, Ohio home of the motorcycle industry’s big show, the Dealer Expo, the place where nearly every company in the motorcycle business went to showcase their new stuff to dealers and the press.

Cycle World, namely Editor in Chief David Edwards, had said that it would do a story, but only if the bikes were really “cool and different.” When Edwards saw the bikes in person at the show, he was impressed enough to have the story written by his then Feature Editor and Rhodes Scholar Brenda Buttner. This story which ran in late spring, along with displaying the bikes in Cincinnati, helped propel Cobra headlong into the Metric Cruiser business. And since that story nearly every Cobra Custom has been prominently featured by Cycle World.

The pieces were falling into place but then came a critical moment. Boyko remembers it like this: “Not long after that show, I met with local builder Denny Berg, and he and I had the same vision for a lot of the work I wanted to do, and he became part of the CSPD team. Denny has built every one of the bikes since that day. We also worked for a few years with a talented designer named Mike Rinaldi who would come up with some of the more innovative designs from our concept meetings, and Denny would then have to build them. Bikes such as the Trakker and Strata-cruiser were just a couple of the break through bikes that came out of this three-way collaboration.”

20 years is a pretty good run for turning out one-of-a-kind custom motorcycles, and while the Cobra Special Projects Division is still going strong, the chances of another 20 years of customs are slight. Says Boyko, “the motorcycle world has changed quite a bit since we began to make these bikes. Now it seems everyone has a custom bike, and we’ve always tried to stay ahead of the curve with how we present our company. So to see what we have in mind for the future, stay tuned.”

So here then is a list of the bikes, in order from that first Magnafied:

WHERE TO FIND COBRA
Cobra products are sold exclusively through premier motorcycle retailers. Check out our website at www.cobrausa.com for a dealer near you, or phone 714-692-8180 for a free catalog.

You don’t have to spend a lot of cash to get a lot. Whether you’re looking for that perfect finishing […]

Obviously there are a plenty of variables at play here, but for the average street-ridden V-twin, a bike with minor […]

Tips for Long-Distance Riding to Sturgis