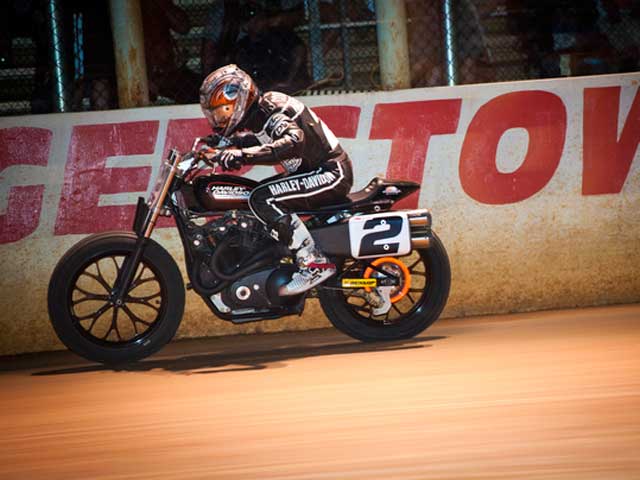 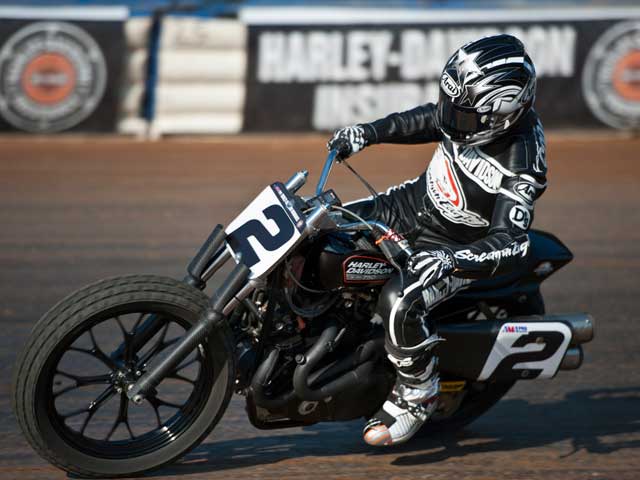 “This has always been one of my favorite tracks. It feels like my home track, in fact,” said Coolbeth, who has now won three times on the Hagerstown half-mile. “We had a great setup on the factory Harley, and this track suits my riding style, so I knew we’d be hard to beat tonight.”

Johnny Lewis rode the Scott Powersports Kawasaki into the lead at the start of the 25-lap Grand National main, but Coolbeth moved to the front on turn two of the first lap and promptly opened a half-second gap on Lewis. Fast-qualifier Chris Carr slotted into third place on the American Motorcyclist Association Harley-Davidson, followed by Rogers Lake/Blue Springs Harley-Davidson rider Jared Mees and Zanotti Racing/Schaeffer’s H-D rider Jake Johnson. As the laps unwound, Coolbeth steadily pulled away from Lewis and had built a 1.3-second lead by lap 14. Carr slipped back in the pack and Mees and Johnson moved into second and third positions respectively, with Johnson more than three seconds off the lead.

Coolbeth appeared to be on his way to victory until the race was stopped on lap 17 when R&J; Racing rider Doug Lawrence crashed, setting up a single-file re-start and an eight-lap dash for the finish. Coolbeth launched well on the re-start, but the action was stopped again when Carr when down after spinning his rear tire and getting bumped by another rider. On the second re-start Coolbeth held his position as Mees and Johnson both got past Lewis. The Kawasaki rider was able to fight back up to second place, but it was Coolbeth first over the finish line by 0.682 seconds. Mees was second, followed by Johnson and Goodwin Racing rider Jethro Halbert in fourth place.

The series points leader, Kings Kustoms rider Sammy Halbert, had a difficult night and finished in 14th place, a result that helped tighten the race for the series championship. After 10 of 22 rounds in the 2011 AMA Pro Harley-Davidson Insurance Flat Track Championship, Halbert has 191 points and leads Johnson by just 15 points and Mees by 16 points. Coolbeth, who scored the maximum number of points at Hagerstown, is now 26 points behind Halbert, with 165 points.

The next race on the AMA Grand National Twins schedule is July 23 on the I-96 Speedway half-mile in Lake Odessa, Mich.

Legend’s Tri Glide lift kit goes for about $180 Courtesy of Legend No one likes a sagging rear end, even […]

If you thought motorcycle gas tank painting was an artform in the USA, wait until you check out these 137-different […]

In 2003, eBay Motors teamed up with our parent company, Primedia, and Ford Racing to build a project car with […]

Lost Highway Motorcycle Show & Concert to give away custom Harley-Davidson