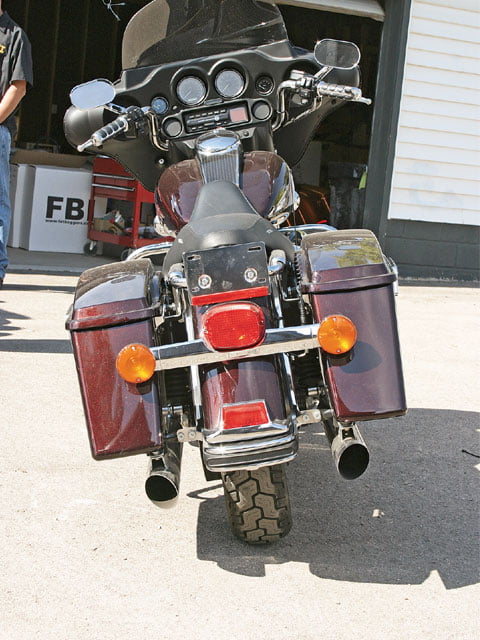 It’s just like that Wendy’s commercial from years ago with that old bag screamin’, “Where’s the beef?” Here’s one of the three different fiberglass fenders FBI offers. This is the company’s most popular fender: It’s called the FBI Wide Fender, and it comes with filler panels already formed in place and a cutout for the flush-mount license/brake light. To go along with the wider rear tire, FBI offers wheels from some of the major aftermarket wheel manufacturers, such as PM, RC Components, Ride Wright Wheels, and Weld. The FBI crew will be installing this 18×5-1/2-inch wheel from RC Components on the Electra Glide. We caught Glen Voth (left) and Alex Schultz (right) as they were disassembling the E-Glide for the transformation. They started by removing the saddlebags and supports, exhaust, rear fender, and rear wheel. The 200 kit requires a 1/2-inch offset in the driveline and a wider swingarm, so Glen removed the primary while Alex unbolted the stock swingarm. Unlike the stock fender, which mounts between the rear framerails, the new fender mounts over the framerails. In order to do so, new mounting holes were drilled just above the shock bolt holes. Meanwhile, Alex was clearancing the inner left side of the frame to provide room for the belt.

After the mainshaft swap, Glen bolted the gearset back into the case.

FBI provides new brackets for the lower fender supports as well as the saddlebag hardware. The company also offers a detachable Tour Pak mounting kit, which works with the detachable backrest as well.

When it came to mounting the fender, Alex aligned the fender on the frame. Then, using the holes that were previously drilled into the frame as pilot holes, he drilled from the inside of the frame through the fender. This fender was pre-painted to match the factory black-cherry paint.

The new swingarm was then bolted in place.

While Alex was taking care of the fender and swingarm, Glen was working on finishing up offsetting the primary. Everything is included to move the primary out 1/2-inch, all the way down to this spacer for the starter jackshaft.

The wheel was slid between the new swingarm to make sure everything was going to fit and line up properly.

To help secure the rear of the fender, this support brace was bolted in place.

After the new fender was bolted into position, the last thing Alex did was install this optional flush-mount license frame/brake light.

While FBI says it takes about eight hours for the average person to install one of its kits, Alex and Glen installed this kit in less than four hours. So, the next time you’re at one of the major rallies and you want a different look for your bagger, you can drop off your bike with FBI, and in less than half a day you could be rolling fat like everyone else.

Baggers are big business. And for Fat Baggers Inc. (FBI) of Chariton, IA, that’s a literal statement. Since 2004, FBI owner Gary Chip and his crew have been blowing out the skimpy stock rear tires that come on FLH models and replacing them with beefed-up 200s. With a variety of kits for ’96-’01 and ’02-and-later FLH model years, FBI found a neglected niche in the custom motorcycle industry and ran with it.

The basic 200mm kit costs just under four Gs and comes with a widened swingarm, all the offsets necessary for the primary, an extended mainshaft, a longer rear axle, a 200mm tire, a choice of three different rear fender styles (unpainted), and all the necessary hardware. All you have to do is find a rear wheel you like that works with the kit.

As stated earlier, this is a bolt-on kit, which means that someone with basic mechanical knowledge and a good set of tools can install the kit in about eight hours. Just keep in mind that the most intimidating part for many people is pulling the gearset from the stock mainshaft and reassembling it onto the extended mainshaft.

However, if the farthest you’ve ever gotten with your trans is checking that little dipstick thingie to see if it had red stuff on it, don’t worry. FBI sets up at all the major rallies and can install the kit for you (for an extra charge) while you enjoy the rally. In fact, that’s how a lot of the company’s kits are installed. FBI arrives at the rallies with a full stock of its fenders painted (another additional charge) in factory colors ready to go. If you have a custom paint job, the FBI staff can send you home with a primered fender, or you can send them a sample of your paint, and they’ll have the fender painted and ready when you arrive (for another one of those upcharges).

FBI also offers bolt-on 240mm kits for V-Rods, and for those who really need an ego boost, the company has 280-300 FLH kits. However, the 280-300s are weld-on kits and require more extensive fabrication work.

This past August while attending the Sturgis rally, we stopped in on the FBI crew as they were just getting ready to install one of their 200 kits on an ’05 Electra Glide. We hung out to watch the install and snap some pics.

Flash for Your DashHell’s Foundry proudly introduces another hot enhancement for your Road Glide. The chrome instrument nacelle and “chubby” […]

Horsepower on the Cheap

Laying rubber for minimal cash. Words and Photos: Jeff Leighton Much like cash, horsepower is better the more of it […]

Parker Hannifin Corporation, the global leader in motion and control technologies, has introduced the TireSaver TS018-Wand