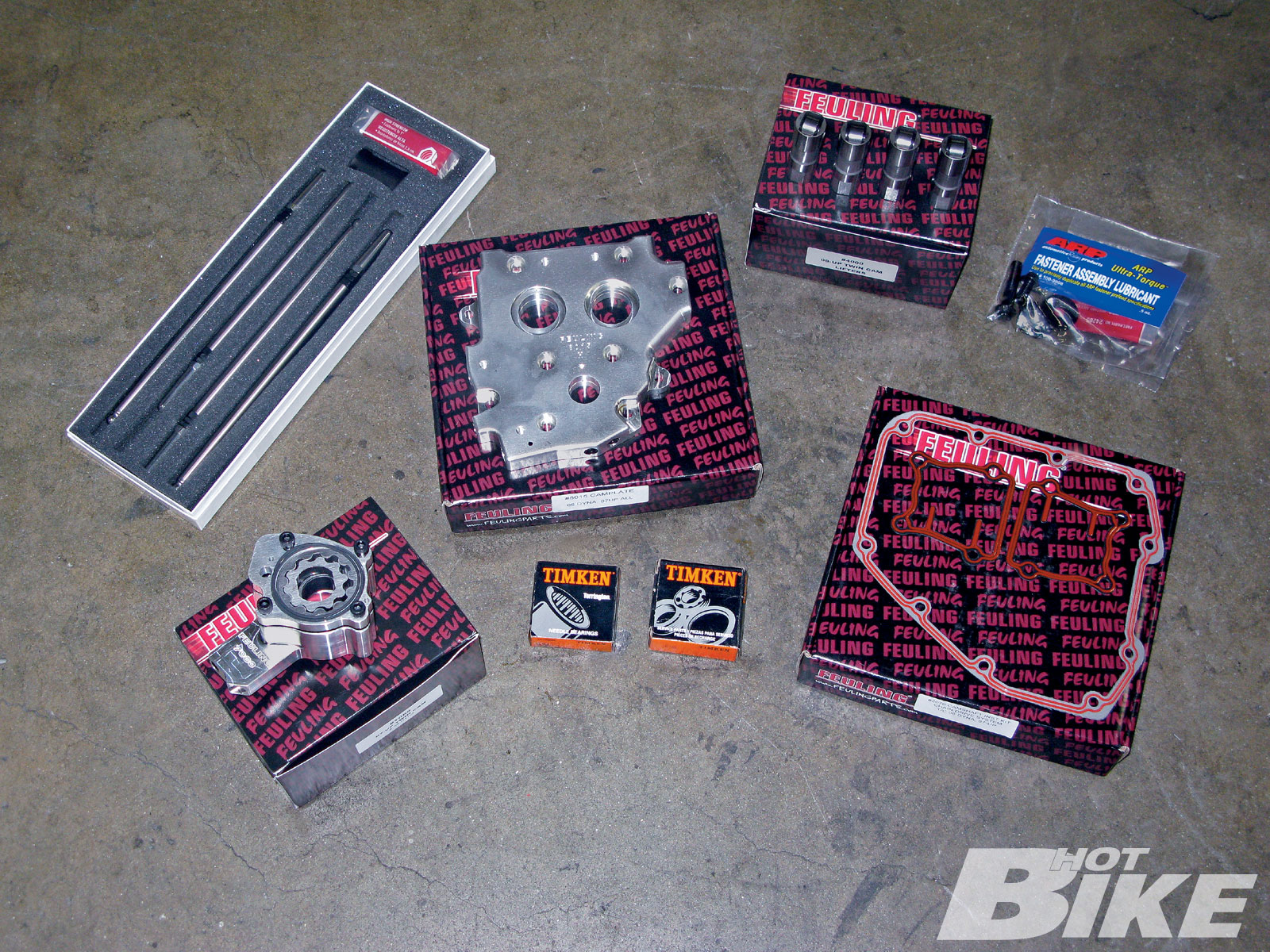 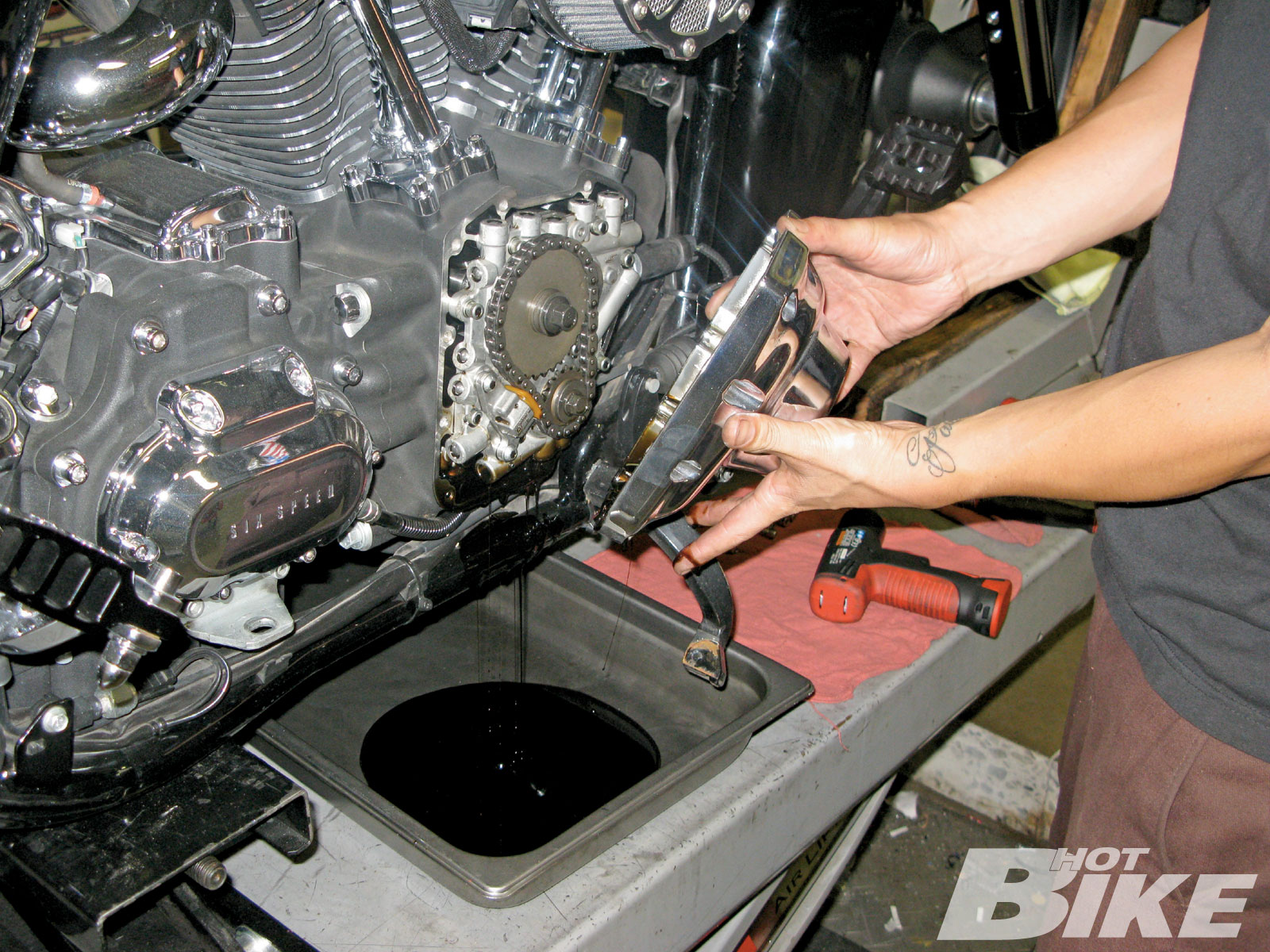 01. To gain access to the cams, cam plate, and oil pump, we removed the cam cover from the engine. 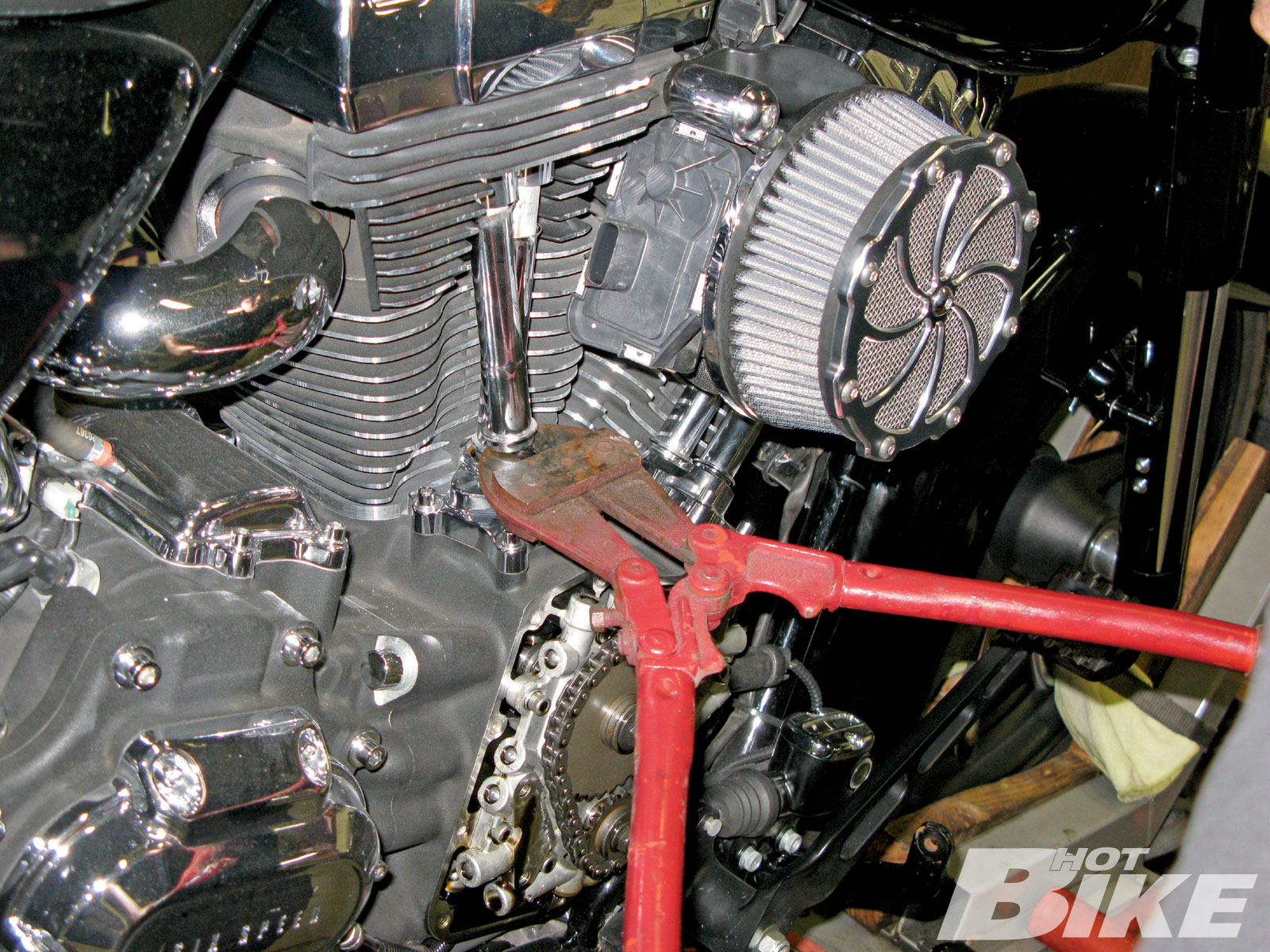 02. The stock pushrods were cut out since they were to be upgraded with new units from Feuling. 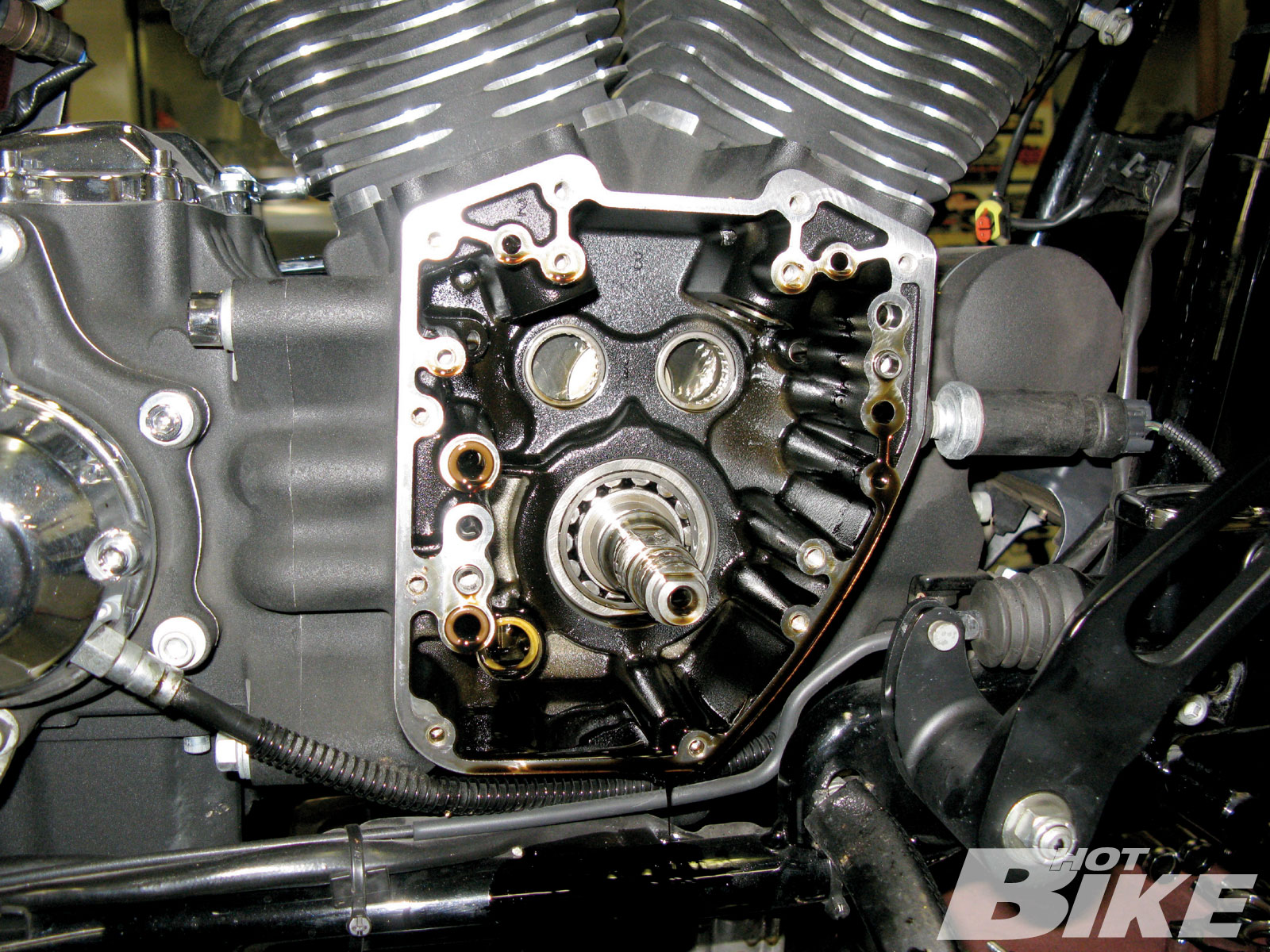 03. The stock cam plate, cams, and oil pump were removed, and the cam chest was thoroughly cleaned. We also checked the crankshaft run out and for any wear. 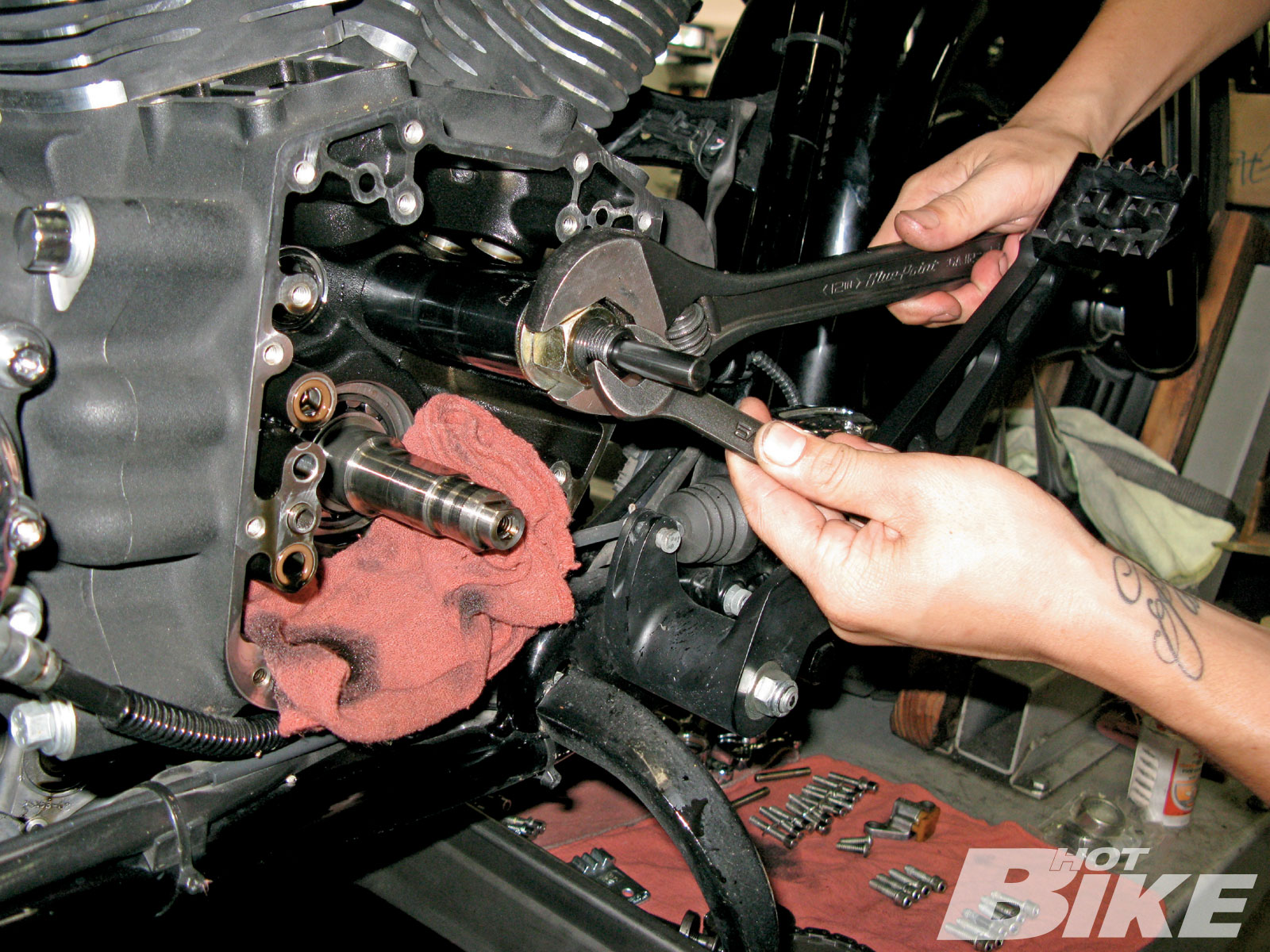 04. We pulled the stock inner cam bearings from the case since we would be replacing them with new Timken units. 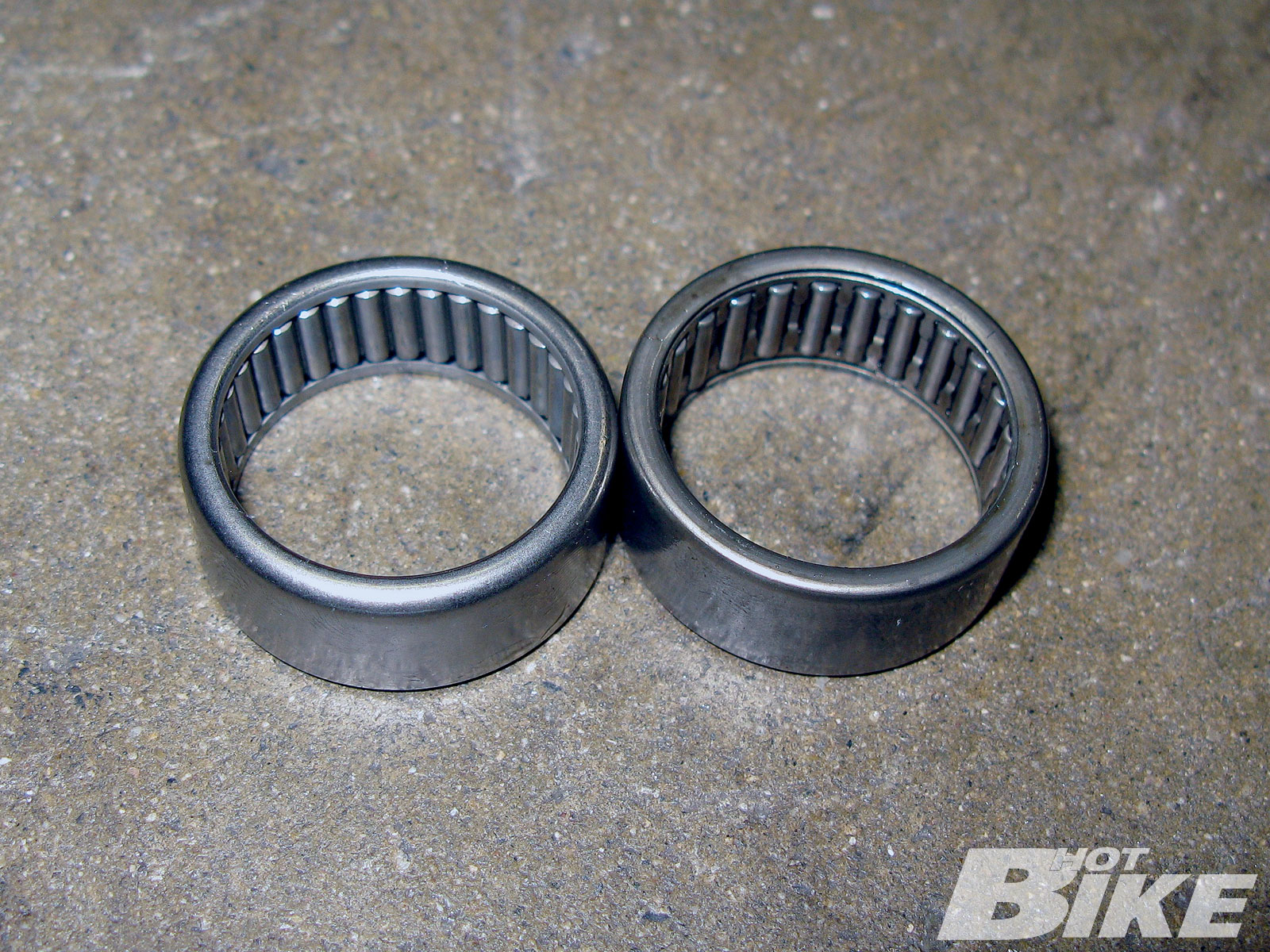 05. The Timken bearing on the left has double the bearings as the stock H-D bearings. This aids in smoothness and longevity of the bearing itself. 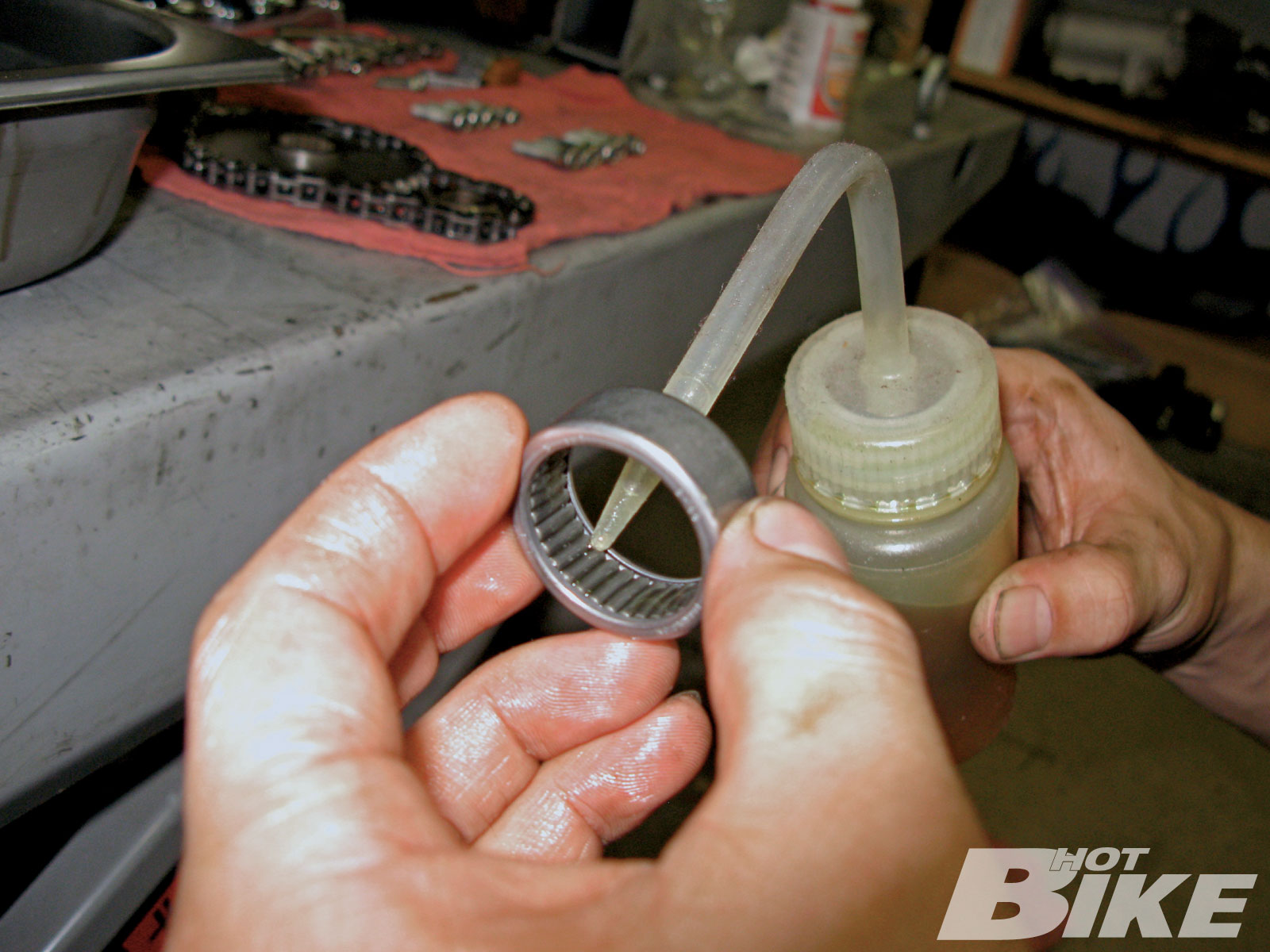 06. The Timken bearings were pre-lubed with motor oil before insertion. This keeps the bearing from undergoing any sort of premature wear. 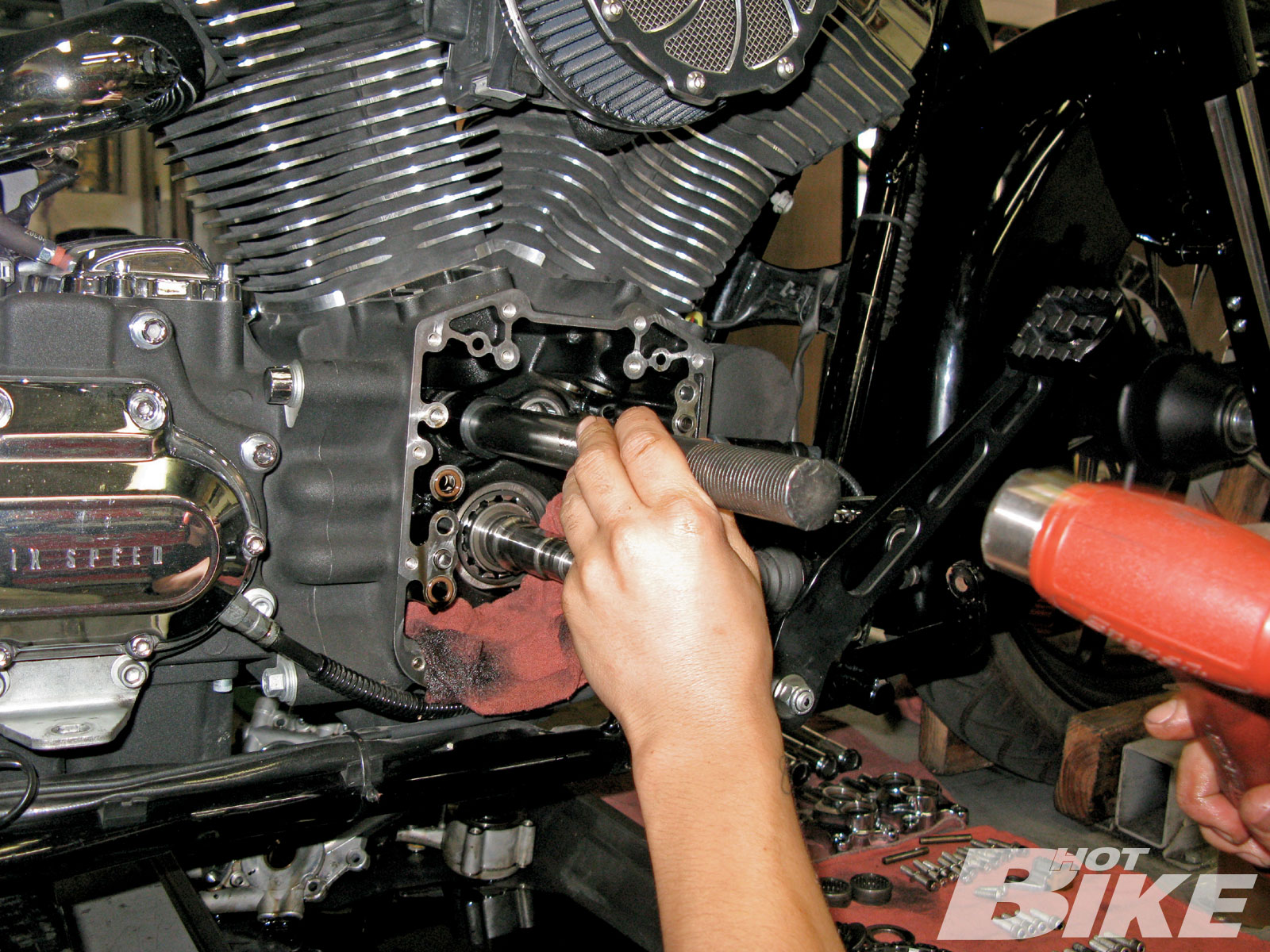 07. Using the proper tool for the job, an H-D cam bearing press, we installed the new Timken inner cam bearings without any issues. 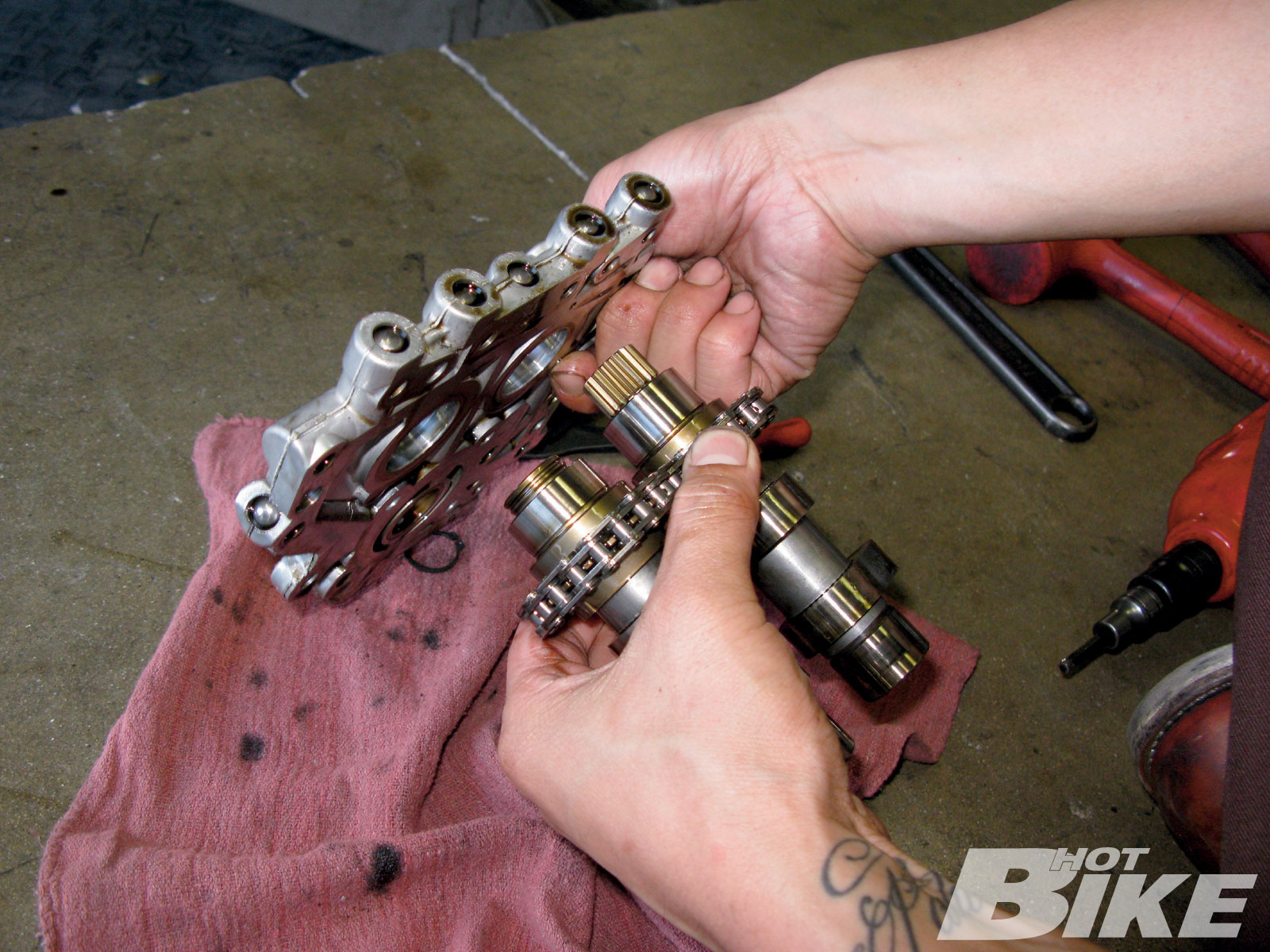 08. The stock cams and cam plate were separated so we could gain access to the cam drive chain, which we would be using with the new parts.

09. The Feuling Reaper cams on the right give this bike some more torque due to their larger lift (574 intake/574 exhaust) and duration (240 intake/255 exhaust) over the stock units on the left.

11. Before installing the cams in the cam plate, we checked to see if there was any interference between the cam lobes and the engine case, which there wasn’t.

12. The cams were installed onto the chain as per Feuling’s directions with the timing marks (arrows) facing one another.

13. The cams were then slid into the cam plate and checked for any binding.

14. The single retaining circlip was installed on the cam to keep them securely in place.

16. The new high-volume oil pump was assembled as per Feuling’s instructions, then we installed it into the cam chest.

17. The cams and cam plate were slid into the cam chest and onto the oil pump as a complete assembly.

18. The cam plate and oil pump bolts were snugged up and the engine rotated by moving the rear wheel by hand several times. This action properly centers the cam plate, oil pump, and gears on the crankshaft.

19. After everything checked out to be aligned properly, the oil pump and cam plate bolts were finally torqued to 110 lb-in as per Feuling’s instructions.

20. The crank and primary cam sprockets, as well as the chain, were slid onto the new cams.

21. The crank cam sprocket bolt was treated with red thread-locking compound and torqued to 15 lb-ft.

22. The primary cam was also thread locked and torqued to 15 lb-ft.

23. The new Feuling hydraulic lifters were filled with engine oil to keep them lubed on their initial startup.

24. With the lifters externally coated with assembly lube, they were carefully inserted as to not damage the cam lobes.

25. Once the lifter-to-camshaft lobe clearance was checked, the roll pin was reinstalled.

26. The surface was cleaned and new Feuling lifter block gaskets were installed on the engine case.

27. The lifter blocks were reinstalled and checked for proper clearance before being torqued to factory specs.

28. To install the Feuling adjustable pushrods, the base of the pushrods were installed into the lifter block first making sure they were sitting in the pocket of the lifters.

29. We then inserted the upper part of the adjustable pushrods into the pushrod tubes.

30. Using the Feuling-supplied fixture, we were able to hold up the pushrod tube to easily assemble the upper and lower parts of the pushrods by hand.

31. With thread-locking compound setting up on the threads, we adjusted each pushrod to Feuling’s specs and tightened the jam nuts.

32. Once we checked everything out, we cleaned the mating surfaces of the engine block and reinstalled the cam cover with the new Feuling-supplied gasket.

33. The cam cover was then installed and the lower end upgrade was done. After waiting a day for all of the thread-locking compund to dry, the owner hopped on the Street Glide and immediately noticed a seat-of-the-pants difference in power. Unfortunately, we ran out of time and didn’t get a chance to put the bike on the dyno for some results. But stay tuned next time as we bump up the displacement to 110ci on this Street Glide and then throw it on the dyno.

On some Twin Cam engines, misaligned oil pumps have a way of making trouble for an otherwise great running motor. Other Twin Cammers have been found to have an incorrectly installed O-ring on the oil pump mating surface from the factory. Both of these factors may allow engine oil to enter the cam chest cavity causing oil sumping. When this happens, the scavenging section of the oil pump cannot keep up with the task of removing it fast enough. This can make an engine perform sluggishly. The sluggishness is caused by the flywheels running through the excess oil in the bottom of the crankcase, slowing them down. It’s as if your flywheels are down at the beach running in sand. Another annoying issue of sumping is oil blowing out the breathers and all over your motor. Our ’07 Street Glide had been feeling a little slow, and when we measured the engine case oil, it had 12 ounces in it instead of the standard 4 to 6 ounces. With the assumption that something was wrong with our oil pump or O-ring, we decided to give the oiling specialists at Feuling a call. After speaking with them at length regarding our issues, they suggested we install one of the company’s Oiling System Combo Kits ($859).

Feuling’s kit is a combination of a billet high-volume oil pump, a hard-anodized CNC-machined cam plate, hydraulic roller lifters, and a gasket set. Feuling states that this kit increases oil pressure, oil volume, oil flow, and returns oil scavenging, which should take care of our sumping issue. Feuling also told us that the kit also generates cooler oil and engine temperatures resulting in a quieter, more powerful engine. Feuling’s tests show a decrease of engine temperatures up to 35 degrees as well as an increase of 3 hp and 4 lb-ft of torque to the rear wheel.

While we were going to have the cam plate off the bike, we thought it would also be a good time to upgrade the cams to something a bit healthier. After discussing this with Feuling, we went with a set of its 574 Reaper cams ($339). These cams are great all-around camshafts with good low-end performance and some ripping mid- and top-end power. Plus there will be room to grow with performance upgrades. Feuling also suggested that we go with a set of its HP+ Fast Install adjustable 7/16-inch chromoly pushrods ($239). These pushrods use a minimal adjustment surface which eliminates the flex associated with other adjustable pushrods. Feuling now makes this in an all-in-one kit called the Feuling Complete Camchest Kit, which includes everything you see here in one easy-to-buy package.

Once we got the big box o’ parts from Feuling, we trucked our sluggy Street Glide down to our pals at Freedom Cycles and had them aid us in the installation of the kit and cams. Here’s how it all went.

In the near future we will take this engine out to 110 ci with the help of JE pistons and some Screamin’ Eagle components, stay tuned.

Here is Dale Walksler of Wheels Through Time Museum aboard one of his bevy of bobbers. The bike features only […]

Erik Buell and company come full circle with the introduction of the ’07 Buell XBRR, a limited-edition production racing motorcycle […]