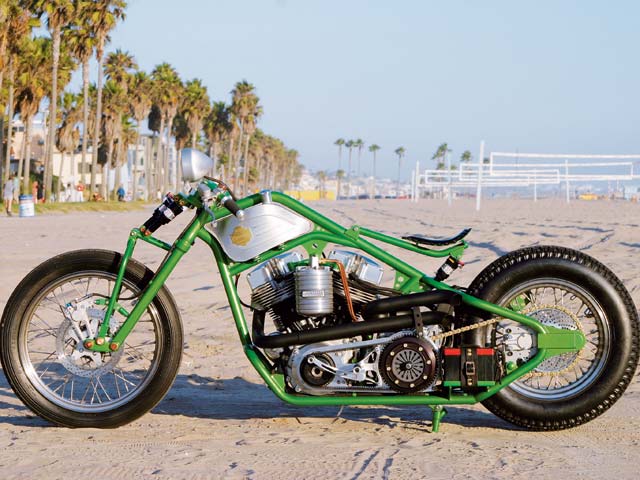 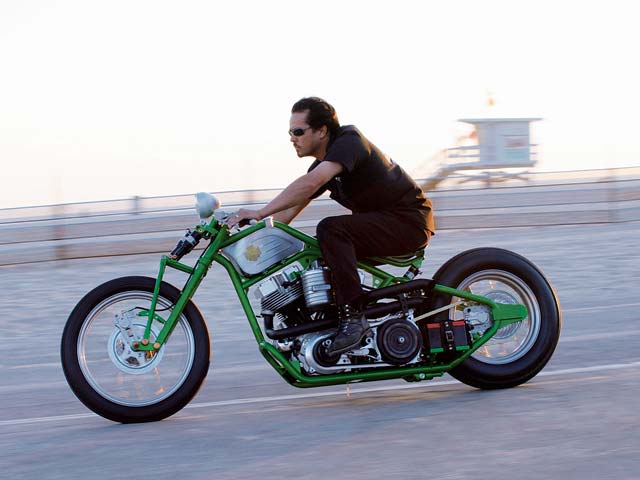 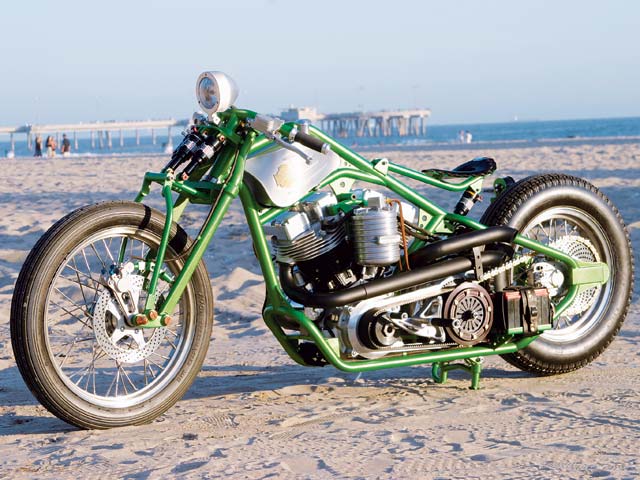 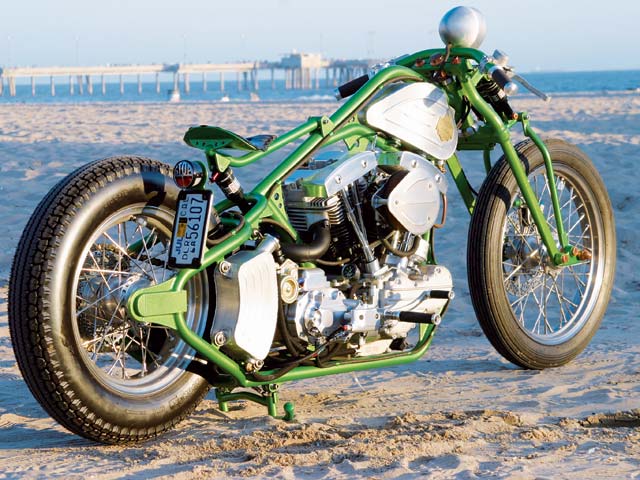 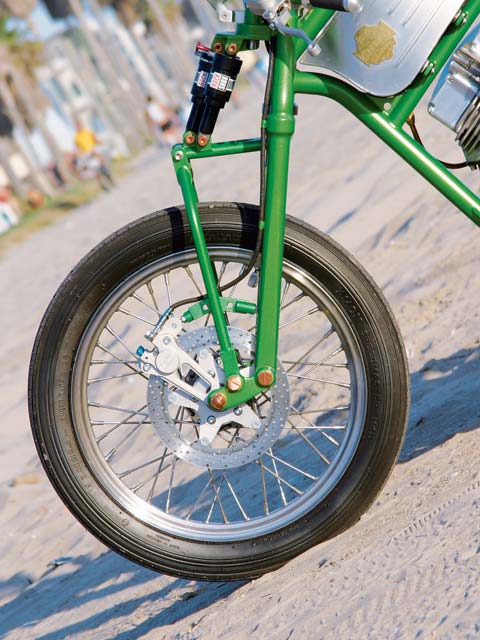 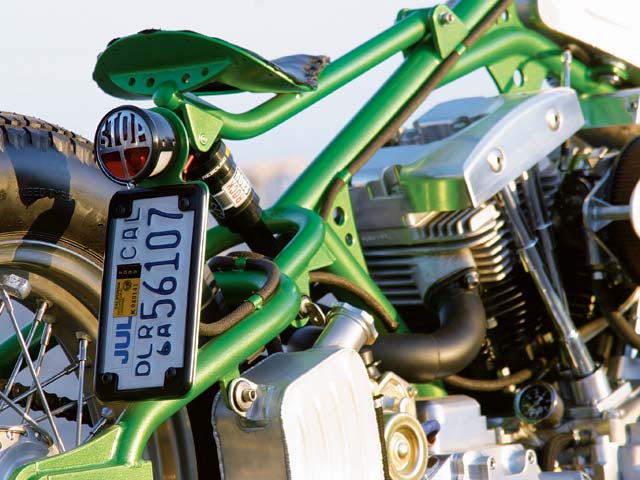 For the past couple of years, at bike shows from Sturgis to Laughlin, people have gathered to see the latest creations from Gard Hollinger and his crew (including Jay and John Brown) from L.A. County Choprods (LACC). Gard’s bikes grace the events and rally pages of magazines across the globe. It seems as if everywhere the guys from LACC go, editors and journalists are struck by their great style–especially among the sea of outstanding bikes present at today’s motorcycle shows.

Scott Gillen, a director and producer of award-winning commercials and music videos, is currently producing a television series for the Speed Channel titled Build or Bust. Created by Gillen, the show gives viewers a chance to build a custom motorcycle. Each episode, a motorcycle enthusiast, nicknamed “the Wrench,” is given the chance to build a custom bike from scratch. Working alongside a well-known custom motorcycle builder, the Wrench is supplied with everything needed to build a custom motorcycle. The catch is that he or she is given just 30 days to complete the task. If the bike is finished, the Wrench gets to keep the bike; if not, the participant goes home with nothing. To add to the excitement of the show and demonstrate for viewers how a custom bike is built from scratch, the professional builder must also complete a bike within the allotted timeframe. That’s where Gard and the LACC guys come into play.

In the case of Funculo (this boardtrack-inspired, Shovel-powered bike), Gard had his work cut out for him. The entire build, from concept to completion, took all of two weeks. You’d think that, given such a short time frame, corners would be cut, and easily accessible, off-the-shelf parts would be used. One look at the details of this hardtail proves that notion to be false.

Gard had the idea for this bike floating around in his head. Inspiration was channeled from his own racing past as well as the great motorcycles of yesteryear. No computer renderings or even hand drawings were utilized. As with any other great artist, he just knew what he wanted and how this bike would come together.

The first thing to accomplish was the construction of the frame. With the aid of the young and skilled Randy Blaze of LACC, the goosenecked, single-downtube cradle was combined with a dual, multi-angled backbone. The upper part of the backbone extends all the way back to the hidden dropouts at the rear of the frame. An interesting take on the venerable pogo seat utilizes a backbone-mounted lever attached to a welded-on tab. All attachment points for the various bolt-on parts–including the gas tank, oil tank, license-plate mount, center stand, motormounts, rear brake caliper, and battery box–were welded to the frame. Hand-drilled gussets were added to key points of the frame for both strength and aesthetics. The completed frame and forks were sent to Andrews for the distinctive green powdercoating that goes well with the brass-plated fasteners.

Continuing with the chassis, a custom-made Garder frontend (a cross between an old Indian leaf-spring fork and a girder frontend) was fabricated in-house. While we’re on the front suspension, it’s worth noting that Gard utilized three bicycle RockShox to smooth out the bumps in the road. Another RockShox unit was used to soften the rigid’s ride under the custom-made leather seat. Rolling duties are taken care of with a set of spoke rims carrying vintage Avon tires.

There’s not much sheetmetal on this scoot; a gas tank and side-mounted oil bag and air-cleaner cover are the only metal items. They were constructed out of bead-rolled aluminum and left unpainted. Double-top frame tubes contain the gas tank, while the oil bag is mounted on the right side of the swingarm. Oil is fed through copper tubing to a vintage Hildebrandt oil filter/cooler before entering the Shovelhead mill.

Other interesting twists on an old theme can be found in the left-side-exiting, stepped exhaust pipes. Gard also modified the PM primary to be completely open; this highlights the slick PM mid controls while keeping with the exposed look of the entire bike. Front and rear brakes are handled by the European outfit ISR. On the rear, the caliper clamps down on the combination rotor and chain sprocket. Bolted to the LACC handlebars are hand controls, also by ISR. They are some of the cleanest, lightest pieces out there, adjustable for different hand sizes, and completely unique.

We hope you’ve gotten a feel for what Gard–and his LACC crew–is all about. Nothing on this bike was neglected or hidden. It’s pretty amazing what can be created in two weeks’ time. With elegance and power, the LACC crew fused tradition and innovation by designing one of the most captivating modern-retro creations on two wheels.

When you’re ready to break free of the pack, L.A. County Choprods has the creative engineering to make you an original. Tune in to the Speed Channel to check out this build and the beautiful “wrench” who tried her hand at building a dream bike. It could be you next. Do you have what it takes?

Mass Media – From The Editor

I remember when I was a little kid, and I couldn’t wait for the newest issue of my favorite magazine […]

Wheel Works is located in Garden Grove, California, and has been family owned and operated since 1976. These guys know […]