Home » Motorcycles » Getting Up Close To Icon’s Airflite Helmet 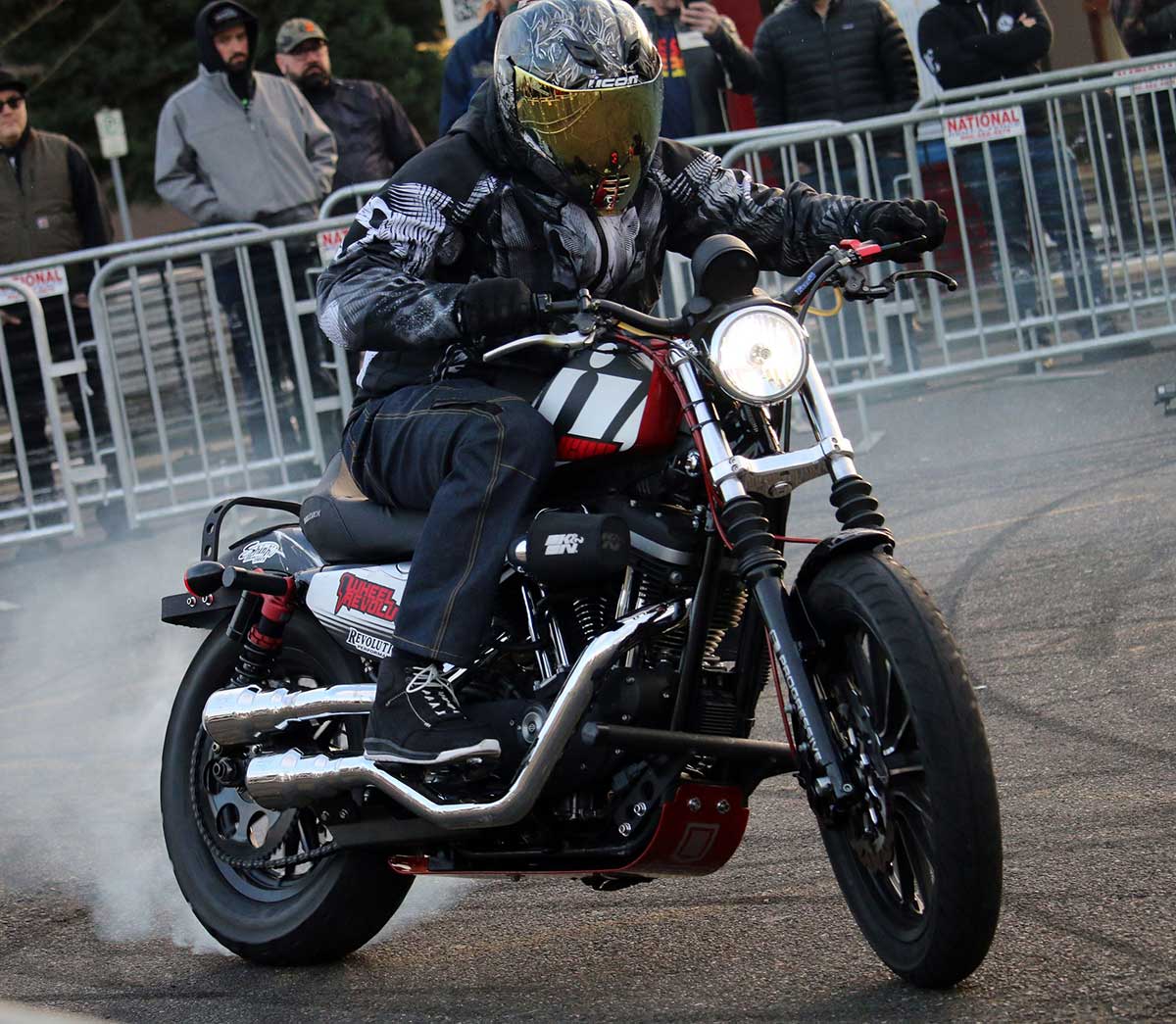 One Wheel Revolution’s Rob Carpenter is under that Airflite lid.

I might not ever be able to ride like One Wheel Revolution’s Rob Carpenter, but at least I can look like him behind the tinted shield of an Icon Airflite. The helmet first caught my eye when Carpenter and fellow stunter Sean Hadley debuted it at Icon’s Harley versus Sportbike Turf War in Portland, Ore. It’s got that certain je ne sais quoi about it, the kind that makes you want to posse up with Daryl Dixon and romp unabashedly through the undead.

Its design is definitely attention-grabbing. With a stretched chin bar, notched neck, and a cyclops-looking visor, the Icon Airflite is a mash-up of motocross and sport lids; the chin bar vintage moto, its shield straight sci-fi. The Airflite’s shell is comprised of the standard Icon polycarbonate blend, the injection-molded shell meeting DOT (US), ECE (Europe), and PSC (Japan) helmet safety standards. The Airflite comes with a built-in sun visor dubbed a DropShield, which deploys easily via a small lever up on the left side of the helmet. The tinted DropShield has good clarity and I never had issues with visibility when the visor was down at the same time.

In regard to the visor, I popped off the clear one that came with the helmet for an RST Dark Gold Fliteshield ($50) and the black and gold combo looks wicked. The swap was simple and straightforward; the side plates pop off with a firm pull, then the shield lifts all the way up and comes right off. Now, if only I could get the Fliteshield to pop up as easily: when it locks into place, it’s hard to get the shield to lift back up with a push of the thumb. 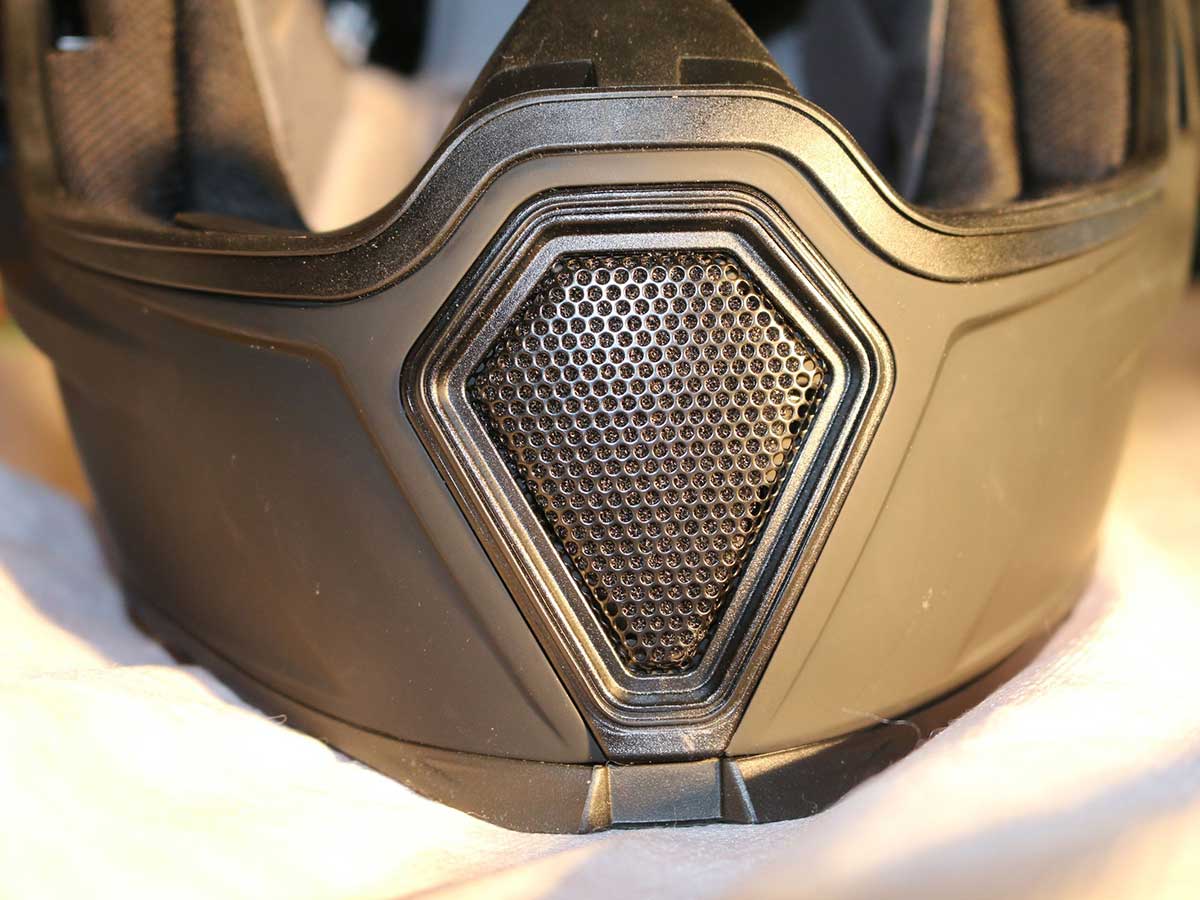 The large vent in the chin bar is three-way adjustable, for serious airflow.

The Airflite Rubatone is an intermediate oval-shaped helmet. I tested an XL, which normally fits fine, but the Airflite was initially pretty snug, particularly in the cheeks. With use, it’s become more comfortable and is beginning to mold to the contours of my face. The cheek pads and padded headliner feature a moisture-wicking HydraDry liner, with the pads held in place by two snaps and a Velcro tab. The headliner has two snaps as well along with four slots in the brow. The ease by which everything comes out is commendable. When helmet funk becomes too much to bear, soaking the liners in baby shampoo then rinsing and air drying is recommended. As far as external helmet care goes, don’t rub a Rubatone with anything abrasive because it will jack up the finish. The headliner has a moisture-wicking liner that’s easily removable and washable.

Air circulation is provided by two small vents in the top of the helmet and a large vent in the chin bar that’s three-way adjustable. Fully open, it funnels a healthy amount of air across the face. Two rear exhaust ports help keep the flow fresh. Thanks to the Airflite’s extended chin bar, the eyeport is big and allows for a bit more peripheral vision than a standard full-face helmet. The tapered design also serves well against wind-buffeting. Now if only Icon could cut down the Airflite’s wind noise a tad.

For $250, the Icon Airflite’s got a lot going for it. The helmet meets world safety standards, it vents well, the liners snap out quickly, and it comes with a built-in sun visor. Putting on the Airflite for me was akin to Jim Carrey putting on the mask. Wanton thoughts of smoky burnouts, wheelies, and stoppies ran through my head. Then reality set in: This helmet has no magical powers. And though I still can’t sling it like Rob, at least I can look as good.

Looking for the perfect heat wrap for exhaust pipes and mufflers? Well, here it is. Drag Specialties® exhaust heat wrap […]

Why? Because skulls are always in fashion. Courtesy of Harley-Davidson Add sparkle and style to any outfit with the new […]