Once upon a time, Jason Pierotti’s ride was a 2003 Harley-Davidson Night Train. While it was also his first motorcycle, it wasn’t his first customization rodeo. He’s been on the car scene since he was 16 years of age. Jason’s owned three Chevelles and a chopped 1954 Chevy 210 sedan too. Motorcycles always lurked in the back of his mind though. Putting his personal stamp on one was a matter of when, not if. 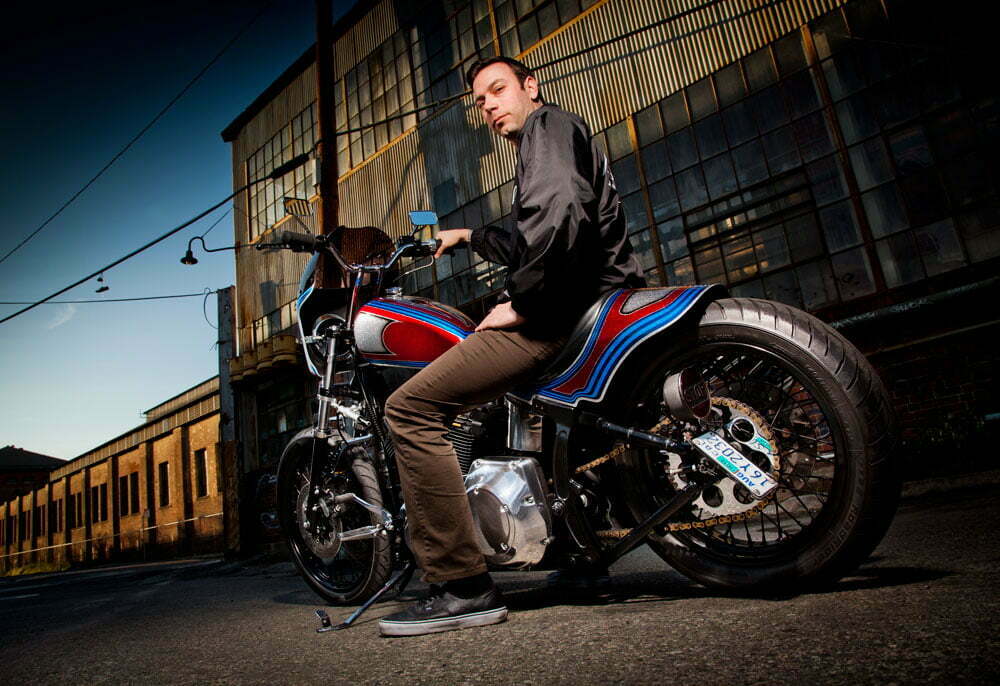 The first round of changes kicked off when Jason Pierotti started realizing what he did and didn’t like while riding the Train. He’s a skinny guy who likes skinny bikes.

The spark igniting Jason’s patriotic-looking Softy was nearly its polar opposite―a ’47 rigid chopper with a 74-inch Shovelhead. It belonged to one of his fellow car club members who was kind enough to let Jason throw a leg over it for a ride one day. That was the gateway drug for his new addiction. 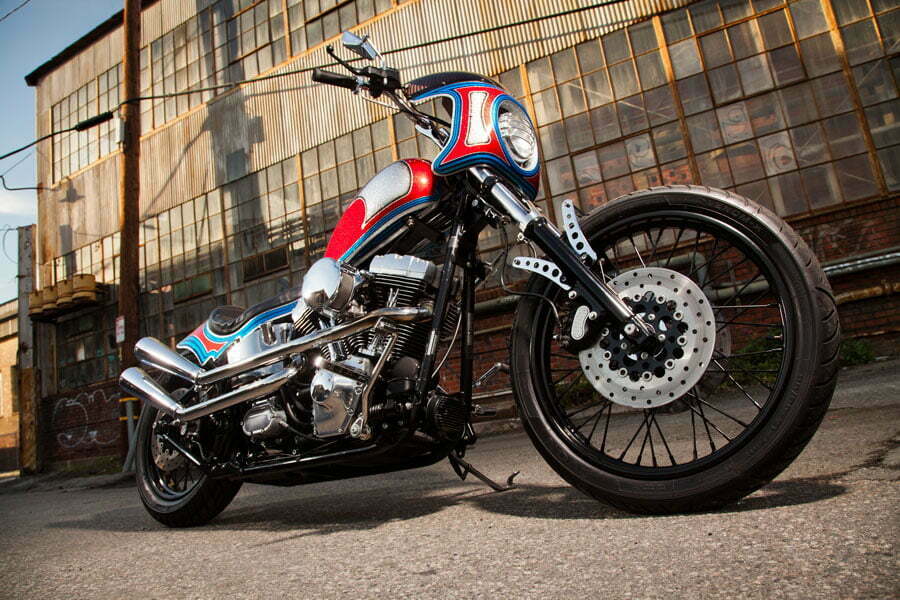 When Jason Pierotti told his Night Train to lighten up, he wasn’t kidding.

An old bike wasn’t for Jason however. He wanted reliability over classic cred in this case. Restoring a basket also meant more shop time, less road time. At least, until you can get it up and running. His impatience also ruled out making one from square one. If he wanted bugs in his teeth tomorrow, his scoot needed to be operational today.

That meant buying a stock Harley. One of his car buddies was a salesman at Bob Dron’s H-D in Oakland. Talking Jason into a dark new Night Train was his doing. Jason financed it, got it home…

..and then his garage called his name. 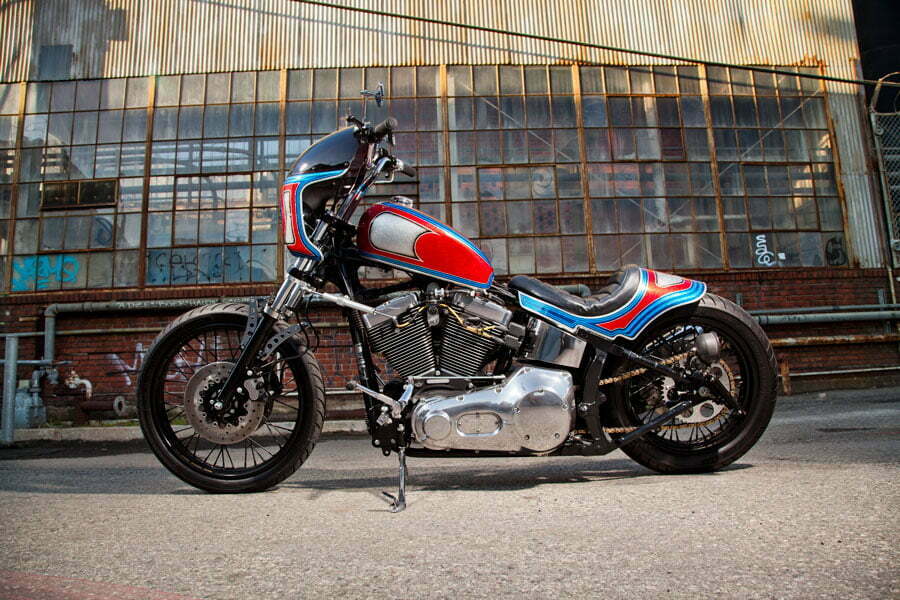 In keeping with the narrow motif, the Wide Glide front end had to go. Pierotti is also a big fan of stopping and mashing through San Francisco and the Bay Area. Better brakes were a must-have too. Those two factors led him to a dual disc Narrow Glide fork configuration.

Instead of running around as planned, Jason’s wrenching addiction kicked in: “I can’t leave anything stock. The day I brought it home, I took off the front fender, turn signals, hor, and reflectors. Then it was time to figure out the direction I wanted to take this bike. I decided to go with a chopper/café/performance-style bike. The first major change was going to a chain drive, side-mount taillight, bars, risers, grips, seat, pipes, and bob and relocate the rear fender. This required some fabrication, and my friend Rene at RM Creation helped me out with this chore. Once that was completed I rode it around like that for a while.” 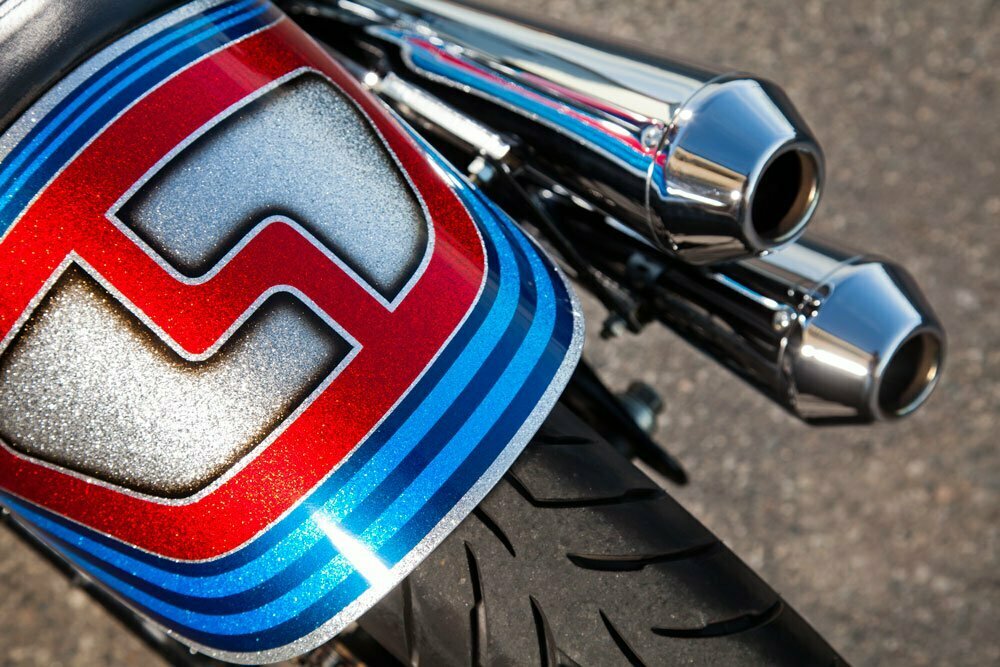 After paying loving attention to the Harley-Davidson’s front end, it was time to hit the back. The motorcycle needed a new tailsection and needed it bad. This is where Chris Gross at Pins & Needles entered the scene. “I’ve painted several cars for Chris as favors and this is how we barter,” Jason says. “I didn’t need to tell Chris what I wanted because we were already on the same page. He worked his magic, did some test fittings with me on it. His finished product was even better than what I had envisioned.”

What started in Jason’s mind as “if” morphed into “when,” and finally evolved to “how long?” Try nine years. Time may fly when you’re having fun, but it bleeds out like a stuck pig when you’re alternating between the saddle and the torch. 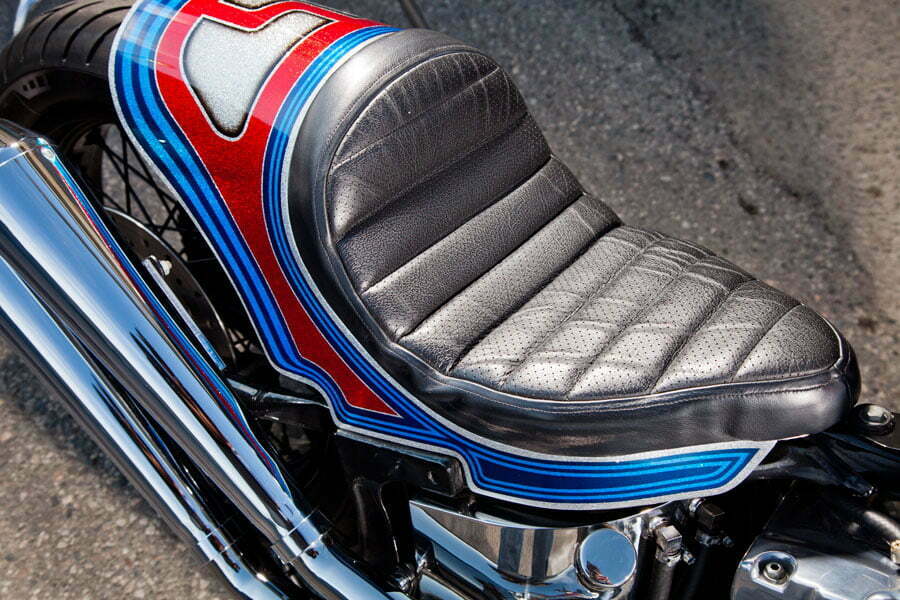 Not only can Chris fabricate but he can also do upholstery. Jason wanted the top to be perforated leather with 2-inch pleats and solid leather side panels. Chris also put him on the bonus plan with two types of memory foam to make it comfy. Add in the flair from the metallic blue leather Chris used under the perforated top seat panel, and you get a bitchin’ seat with hidden flair. In a certain light, you can see the blue through the perforated holes. 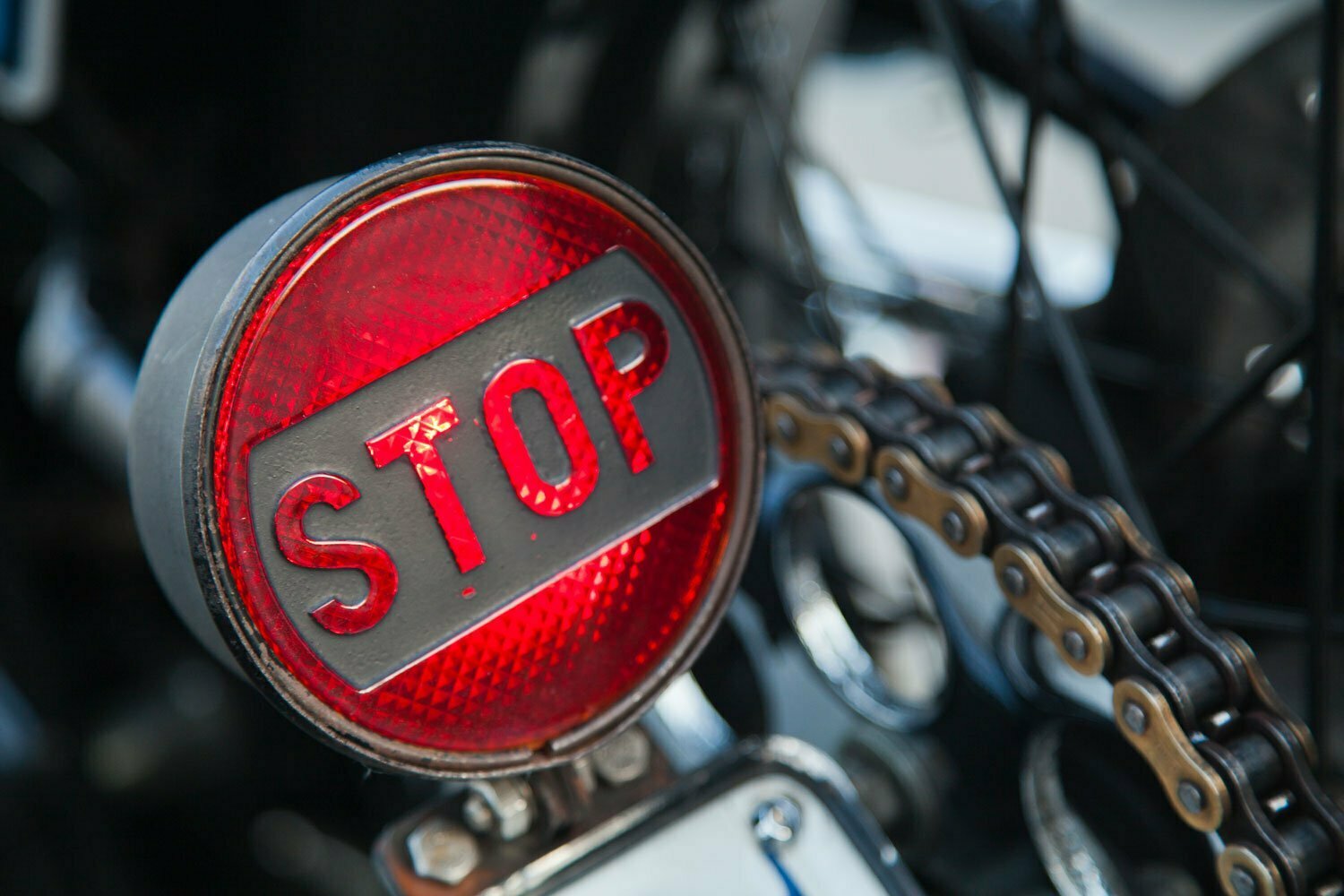 At this point, Jason left the tank and tailsection in bare metal. Riding took precedence over painting. This also let him replenish funds while thinking about paint designs. Not that he left his ride alone at this time. He just switched his focus to minimize downtime: “I sold my wrinkle black covers to fund the purchase of the polished aluminum covers. Headlights are always a neat and intricate part on a well-thought-out bike, and after scouring the internet, I came across this vintage Yamaha trailbike headlight which was perfect.” 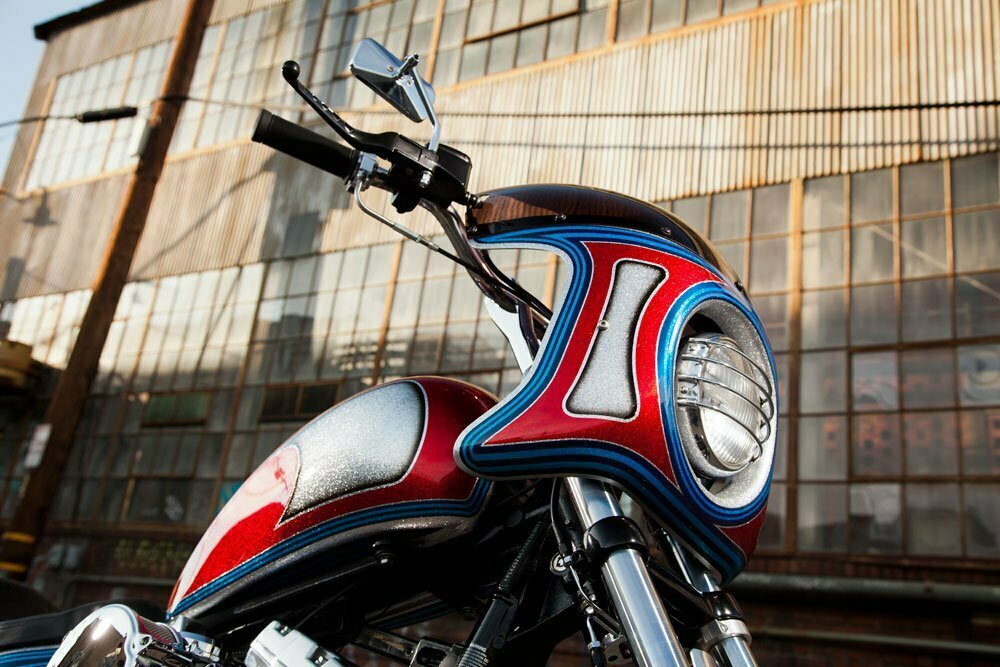 Early on Jason knew the café look was for him. He still hadn’t addressed that up to this point, but while he set aside spare change for paint, he added a Viper quarter fairing like the one he’d painted for a friend’s Thruxton. A little trim, a little notching, and he had his café-racer looks. 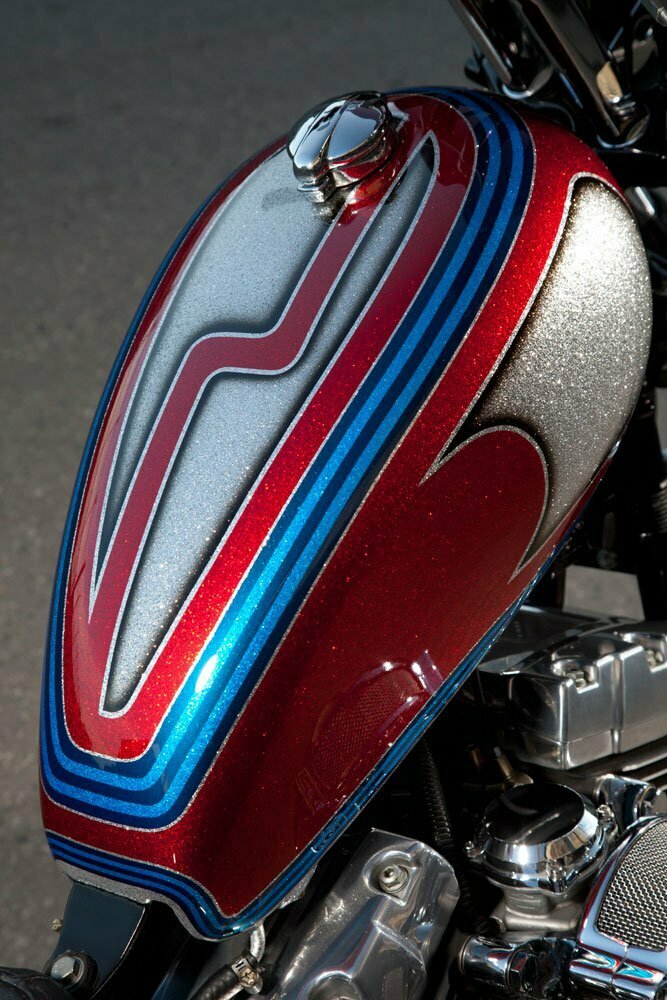 The Harley’s fatty tank wasn’t doing it for Jason. He mulled trading out the Fat Bob gas can for a Sporty one, but everybody does that. He also had a 1970 Triumph Bonneville tank in his garage, a holdover from his pre-riding “someday” phase. The more he thought about adding it to the Night Train, the more he knew it was the right move: “At that time I was a painter at a body shop and had one of the best fabricators around located behind the shop: Carey Buck, who owns and operates Arrow Sheet Metal. I approached Cary with my ideas for the Bonnie tank on my Harley and his reply was, ‘No prob. Wanna trade? I need some paint work done on my son’s ’66 Chevelle.’ My response was, ‘Sure, no prob.’” 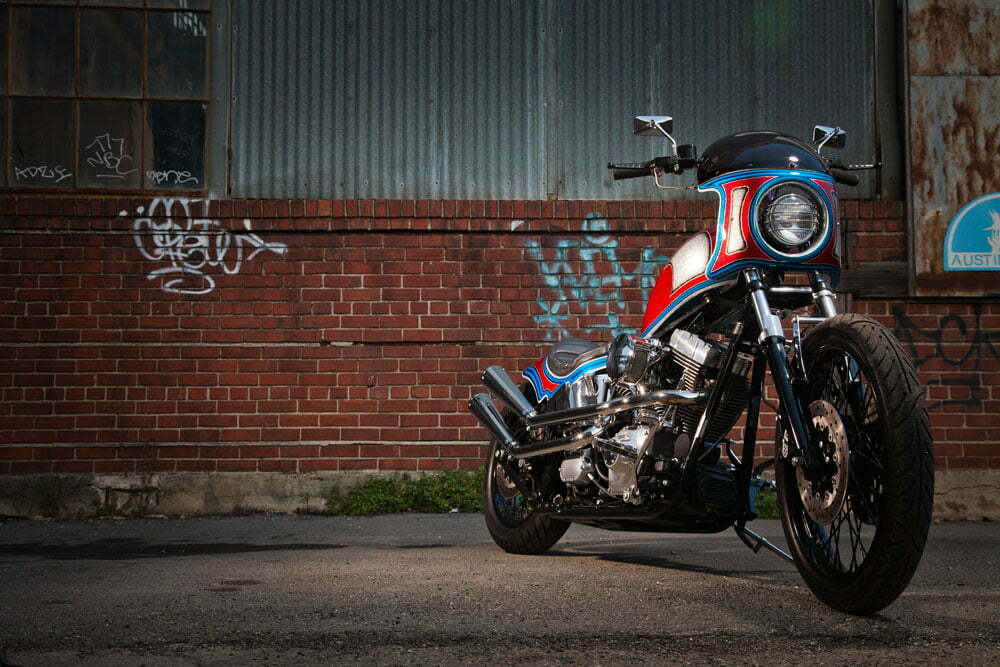 Jason Pierotti still hadn’t painted it at this point. Meeting a blond lit a fire under his ass to change all that. Namely, one magazine editor named Jordan Mastagni, who saw Jason’s Softail and wanted to shoot it for Hot Bike when the motorcycle was done. That sent Jason talking paint with Jayme Schmidt at Blue Moon Customs. They brainstormed a plan for the Martini Racing-inspired, metalflake color blend that now peacocks his Softail. After that, Pierotti and his friend Eladio Mendoza handled the bodywork, prepped it, and blocked the parts for paint. 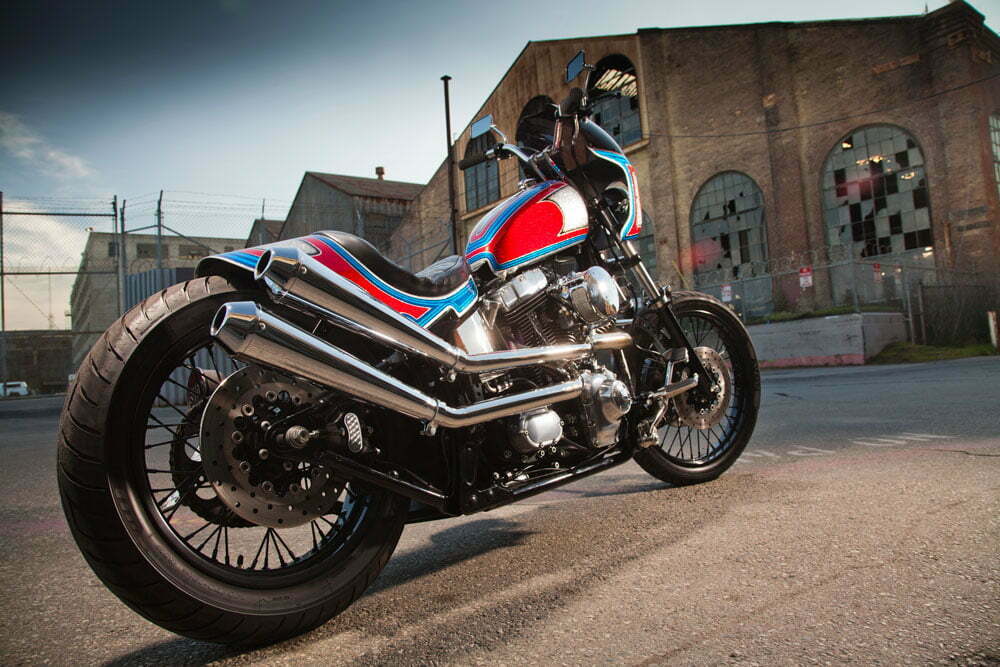 Since the metalwork was going off for colorizing, this was as good a time as any to make a few other tweaks that were kicking around Jason’s mind. Jason Steed at C-51 Customs made Pierotti a new exhaust, rewired it, made the new foot controls, and ditched the hand controls. He also massaged the clutch.

Pushing limits and breaking stereotypes is what Jessi Combs does. Whether it’s working to break competitive land-speed records or being […]

What: WyoTech’s custom bike, which was revealed on Discovery Channel’s “American Chopper: Junior vs. Senior” on September 19, 2011, is […]

The Sturgis Calendar: What’s Up