This article was originally published in the October-November 1999 issue of Cycle World’s Big Twin magazine.

It is incumbent on a magazine of this high authority to thoroughly test ride every Harley-Davidson two-wheeler currently on the market. It is our duty—and our pleasure—to get on ’em and wring ’em out, to find precisely what makes them tick, to commend their strengths and expose their weaknesses.

Hey—it’s a thankless job, but somebody has to do it. So it is with Harley-Davidson’s new line of bicycles. The three-bike lineup includes the baseline Velo Glide, the saddlebag-equipped Velo Glide Ultra, and the Custom Sport. The Velos obviously were de­signed and outfitted to emulate the big, real Harleys, while the Sport is aimed at a different audience.

In keeping with our pledge to use ’em and abuse ’em, we took a new Velo Glide for a spin around the Newport Beach pier area. We’re glad to report that right from the get-go, the pedal-powered Harleys proved every bit the babe magnets that the Evo and Twin Cam models are. Girls—indeed, everyone from young kids on BMX bikes to the fit-for-life health freaks covered with perpetual sweat, grunting away on multi-thousand-dollar racing bicycles—appreciated the classic lines of the Velo. As they very well should, since the frames of these bicycles were de­signed to match the lines of their internal-combustion brothers. 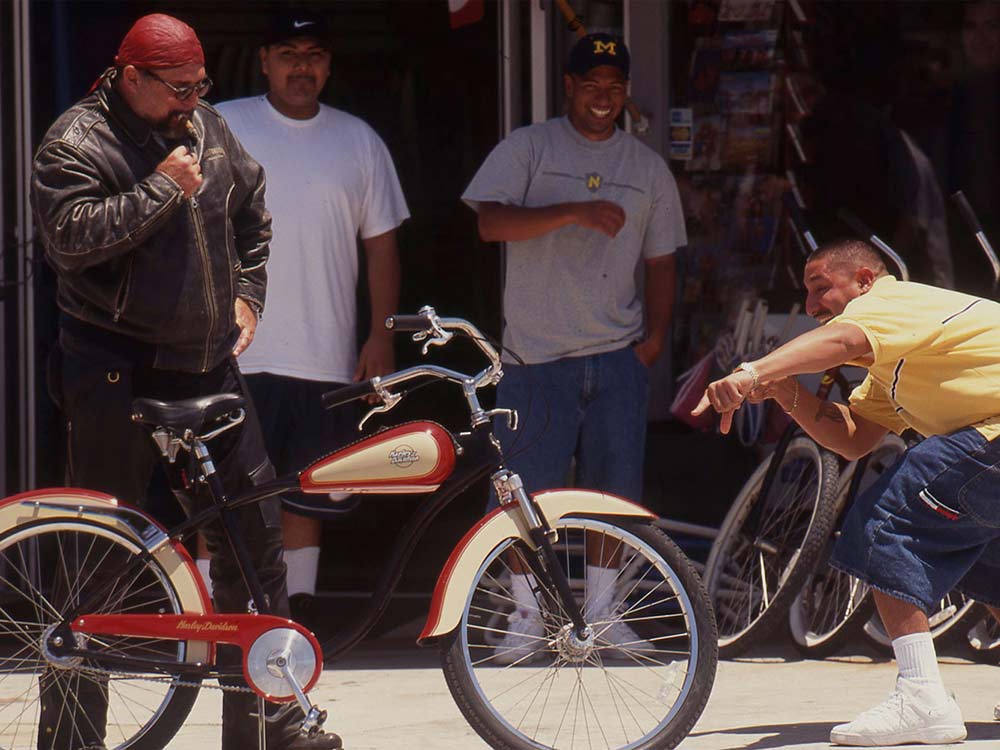 From the fenders to the faux gas tank, the Harley bikes tend to get some attention.

Aaron Bethlenfalvy, chief designer of the Velo Glides, says that his main styling cues came from the Heritage Softail Classic. Once Harley consented to lend its famous name to the bikes, Bethlenfalvy, who works for GT Bicycles in Longmont, Colorado, was in constant contact with the folks in Milwaukee. “I’d send them renditions,” he says, “and they’d respond with something like, ‘Okay, it’s good but we’re not real happy with the shape of the tank,’ or, ‘Maybe you should just look at the tank we’re going to send you in the mail and then change yours accordingly.’” After the designs were accepted, Bethlenfalvy turned to Computer Assisted Design software to draft the final versions.

In construction, the Velo Glides are built on chrome-moly steel frames. The backbone between the seat and steering head is 33mm in diameter, and the downtube from the steering head to the crank has a 38.1mm diameter. Both tubes have a wall thickness of 1.2mm. The main running gear, which includes the derailleur and brakes, are by Shimano, industry leaders in bicycle equipment. The fenders and faux gas tank are constructed of a very pliable grade of Thermo Plastic, chosen for its ability to withstand the rigors of shipping the bicycle to the dealers. No kidding. It seems the bikes were injured more during shipping and handling than they were while being ridden. 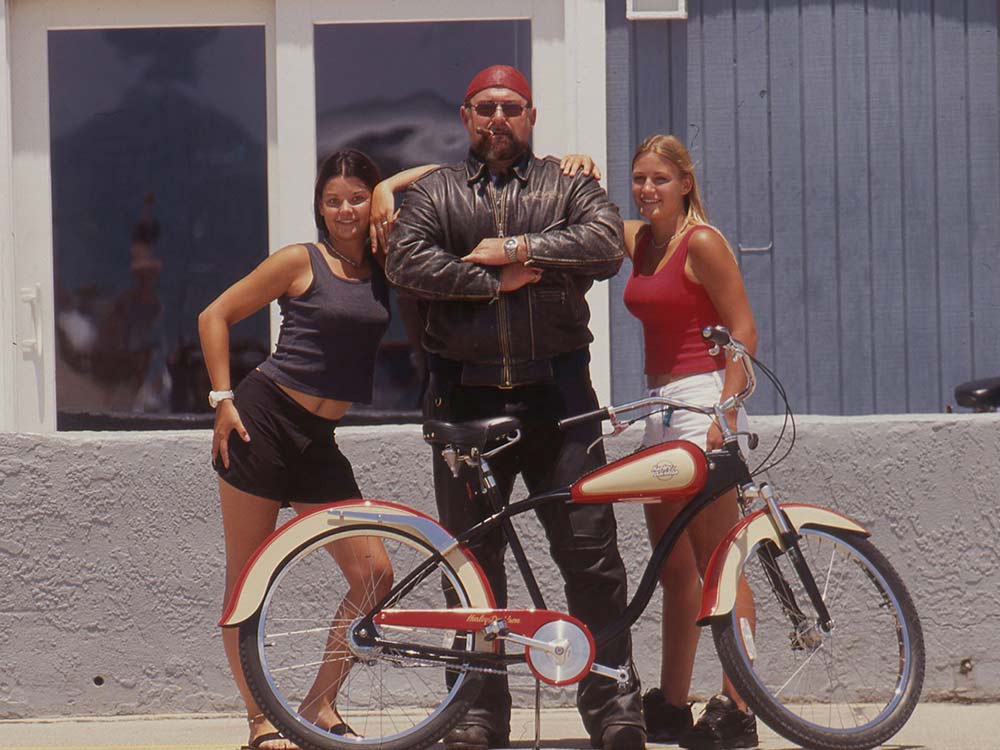 “We’re not sure if anything connected with Harleys ought to be considered “cute,” but the crank sprocket cover really fits that description.”

Overall, the fit and finish on these mini-Hogs is very good, with the paint jobs meeting the standards of real Harleys. And if the paint schemes look familiar, they should: They’re genuine Harley-Davidson colors.

We’re not sure if anything connected with Harleys ought to be considered “cute,” but the crank sprocket cover—made from a big, round H-D air-cleaner badge with the bike’s model name on it—really fits that description. And is a nice touch. The seats on all models, and the saddlebags on the Ultra, Glide are made of genuine leather, as are the handgrips, which come from the Harley-Davidson motorcycle accessory catalog. 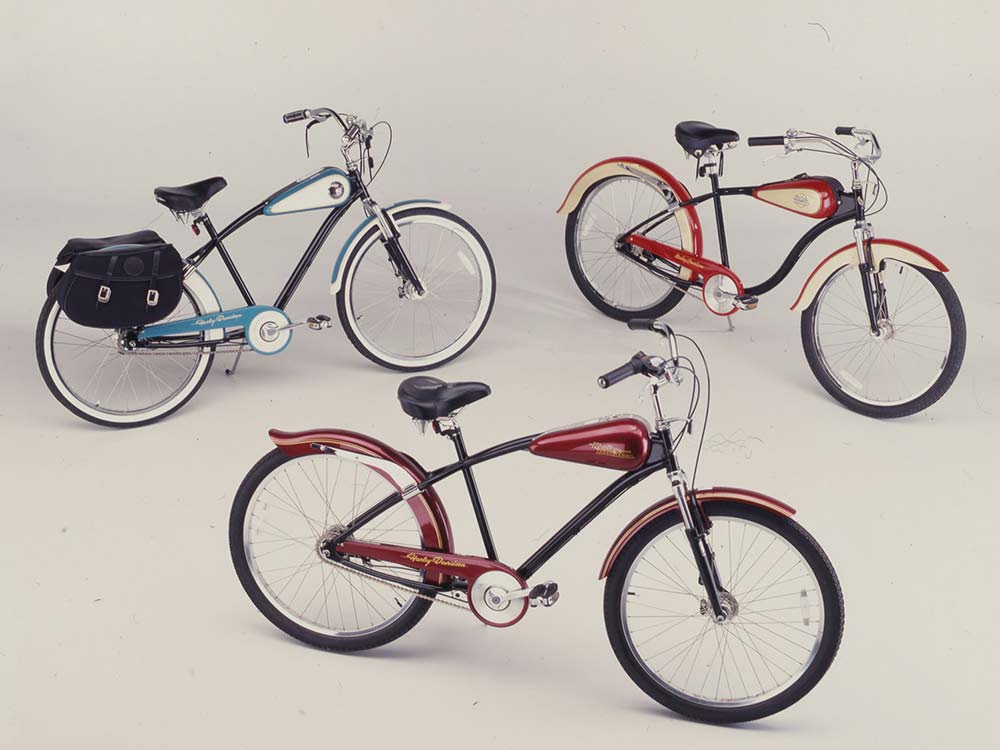 The standard Velo Glide (upper right) and the Velo Glide Ultra (upper left) are very similar save for the Ultra’s added accessories and dress-up equipment. The less-stylish Sport (middle) is geared to more utilitarian use.

After spending an afternoon on the red Velo Glide, we can honestly say that we like the bike—a lot. Its strengths were readily apparent: good looks and machinery that works. We did, however, find them to be woefully underpowered. The main weakness in the propulsion system was, well, our legs. There are easy fixes, though, as close as your local health club. We feel that a Stage II power kit, provided by Nautilus machines or free weights, can substantially raise the power output of these bicycles. Indeed, after a mere two days of working out—supplemented, naturally, by the proper dietary supplements á la Mark McGwire—we were able to do some pretty impressive burnouts. And throughout all the dragstrip abuse, the driveline and brakes performed flawlessly.

So, you ask, do we like these pedal-powered two-wheelers? We surely do. They are, however, a bit pricey. The Velo Glide lists for $1699, while the tricked-out Velo Glide Ultra goes for $2499. And here’s a bit of sticker-shock trivia for you: The Velo Ultra bicycle lists for $40 dollars more than a 1972 Harley-Davidson Super Glide motorcycle, and $363 more than a 1972 Sportster. Amazing, isn’t it?

Arlen Ness has just released their front Caliper Housings for Victory and Indian Models. The caliper housings fit all Indian […]

When I first started at Hot Bike, one of the very first shoots I did was of Russ Wernimont’s Dyna […]