Home » Uncategorized » The History Of The Panhead

The History Of The Panhead 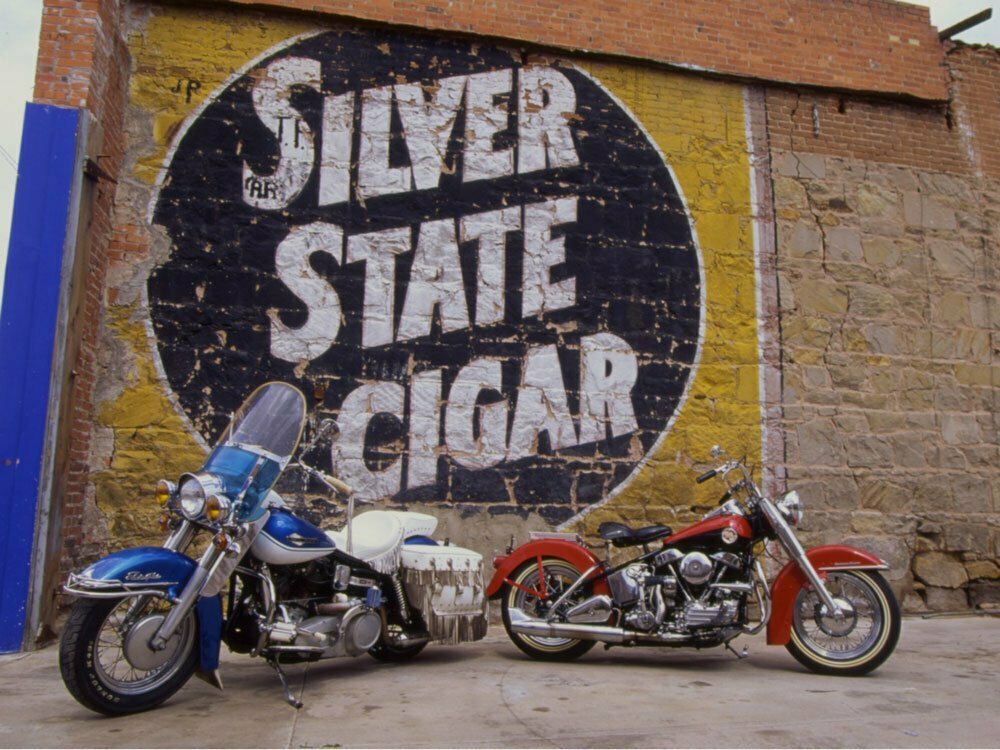 The ’65 FLH owned by Buzzz Richardson and the ’57 FL of Mike Javernick, both residents of Cañon City, Colorado, are fine examples of original Panheads.

This article was originally published in the August-September 1998 issue of Cycle World’s Big Twin magazine.

Every model Harley ever introduced, except the first, upset the fans of the previous model. The 61 E Knucklehead may be the most worshiped bike The Motor Company ever built, but the legions of fans inspired by the 1948-65 Panheads are elated that Harley canned the Knuck.

The first Panhead—or model FL, available in both 61- and 74-cubic-inch models—arrived in dealers’ showrooms in 1948, just in time to be a major part of the postwar motorcycle boom. A generation of young servicemen had grown up on the battlefield, some of them having ridden Harley’s WLA 45-inch military model in combat. Though slow as molasses, the big, low-powered twin captured the im­a­g­ination of many of the soldiers who rode it, while stirring pangs of jealousy in many of the foot-slogging infantry.

When the war was finally over, the GIs came back to a rapidly improving national highway system. The new riders had the income to pursue touring and leisure on two wheels, and the desire to do it on Harley-Davidsons.

Richardson’s ’65 (left) isn’t just for the looking; it’s a rider. The fabulous ’49 Hydra-Glide (right) owned by Brendon Meir of Scottsdale, Arizona, is a joy to behold. Doug Rugg of Newport Beach, California, owns the ’65 FLH (lower right) that, although lowered, still is a decent example of the first electric-start model.

With its cast-iron heads, which provided meager heat-dissipation capabilities, the Knuckle found it tough to survive on the newer, straighter highways, roads that encouraged faster speeds and much longer journeys: You could easily ride from one end of the country to the other, needing to stop only for fuel and food.

That first FL in 1948 was based on the reliable transmission and bottom-end of the EL, but the “Knuckleheads” were replaced with massively finned cast-aluminum heads that could radiate and dissipate heat much more efficiently. The new engine also was equipped with an uprated oil pump to improve cooling and lubrication. And, in hopes of ending cylinder-head oil leaks for all time, Harley’s designers enclosed the rockers and valve springs under one big, pie-pan-shaped cover—hence, the “Panhead” nickname.

Changes brought challenges. As the engine warmed, the new alloy cylinder heads expanded and grew much more than the old cast-iron heads; and because of the Big Twin’s nearly four-inch stroke, the amount of expansion was considerable. As the head grew away from the cylinder base, increased valve lash would have resulted, were it not for the incorporation of hydraulic tappets that automatically maintained valve clearances. Though these tappets initially were problematic until 1953—when their location was changed from atop the pushrods, where they were starved of oil, to the bottom, where they got ample lubrication—they meant that valve adjustment was forever crossed off the H-D rider’s list of frequent maintenance chores. Just one year later, in 1949, a hydraulically damped telescopic fork replaced the venerable springer front end, and the FL was aptly given the Hydra-Glide name. The mile-eating qualities of the Panhead became obvious when Harley-Davidson started its Mileage Club in 1951; within just four years, 73 riders had earned their 100,000-mile pins, many on Panheads. The Panhead grew even more comfortable yet when the 1958 Duo Glide introduced rear suspension. That year also was the last in which hand-shift/foot-clutch was available, and even then, it only could be had as an option. 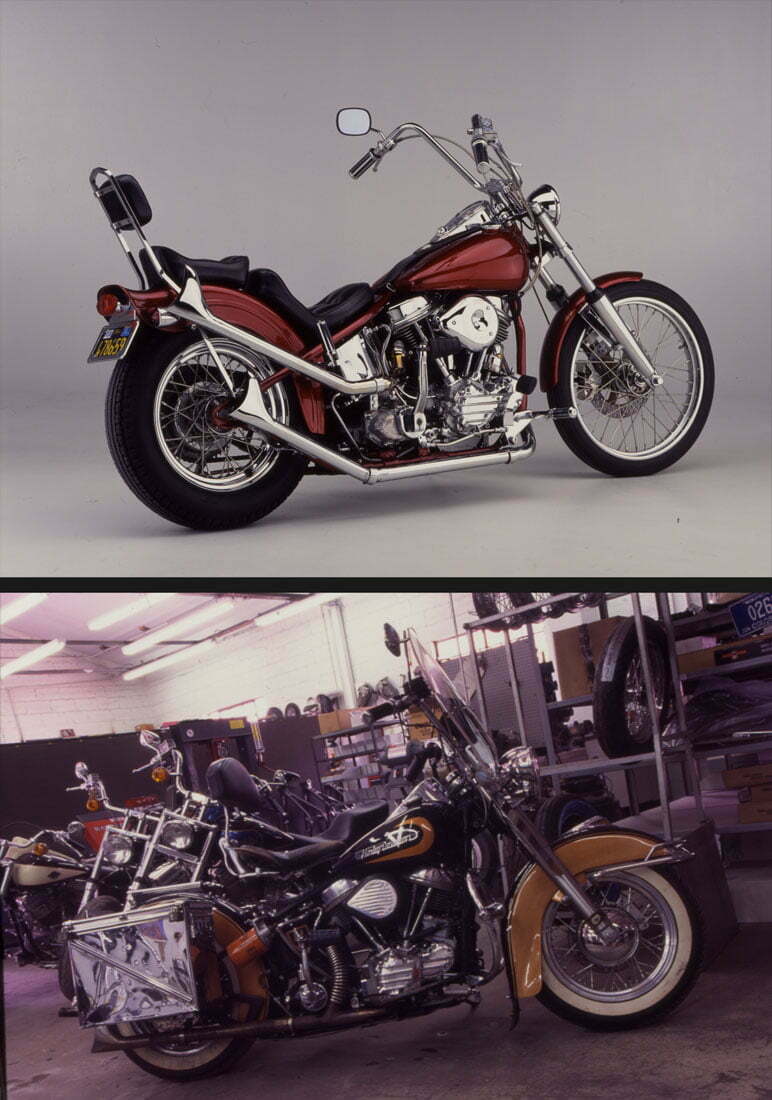 Quite a lot of Panheads were turned into choppers, such as the maroon ’59 (top) owned by Jack Mohler of Laguna Beach, California. The bike with metal bags (bottom) is another Panhead owned by Buzzz Richardson, president of Panzer Motorcycle Works.

Hydraulic drum brakes also arrived in 1958, and for good reason: At around 700 pounds, Panheads weighed twice as much as the imported British competition while producing comparable peak power. They would never win any races, but the H-D Twins had staying power, and enough torque to eat up mountain passes in high gear. The plush new fork, combined with a long-travel sprung seat and wide, comfortable footboards—not to mention the aforementioned switch to a hand-operated clutch and foot-operated gearchange—combined to make a roadburner that was difficult to beat over the long haul. And with the 1965 Electra-Glide came 12-volt electrics and the luxury of pushbutton starting, rendering the kickstarter obsolete—although it continued as an option for another 20 years.

Throughout the Panhead’s 18-year existence, oil pumps and bearing sizes were almost continually uprated, due to the serpentine oil passageways of the FL and the ever-increasing power demands being placed on Big Twins. By 1960, claimed output was up to 60 horsepower. These upgrades, together with the changes necessary to accommodate electric starting, meant that the Panhead used six different crankcases over its lifespan.

But the year in which electric starting first appeared, 1965, also was the Panhead’s swan song. The leaner, more-powerful Shovelhead would replace it in 1966.

In the Sixties, the ready availability of used Panheads was a boon for the chopper movement. Indeed, the Pan’s greatest fame would come as a chopper, as the “Captain America” bike in the movie Easy Rider.

Some Panhead fans, however, prefer to judge these motorcycles strictly on their merits. The lifespan of the Panhead was one of constant improvement; but for many enthusiasts, the 1949-57 rigid-rear Panheads, with their classic mix of function and pure American style, remain impossible to beat.

So, while the era of the Pan may be long gone, the motorcycle itself has never been forgotten.

The 2018 Road Glide Special differs from the base model in many ways aesthetically, but it still has the 107 […]

Three years ago, if you came across Ira Greenberg on a ride, chances were he was on a rigid, looking […]