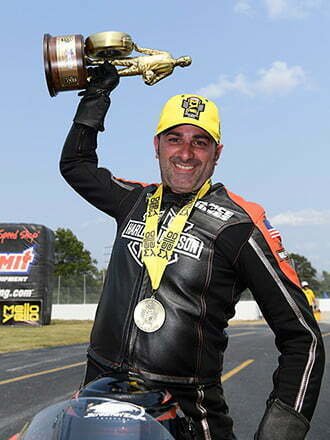 “This was a really big win for us,” said Krawiec. “We showed the rest of the field that we have our new chassis figured out and we’ll be bringing two very fast Harley Street Rods to the Countdown. We are here to play and they better be ready.”

Krawiec was the top qualifier for the prestigious Labor Day weekend event, heading the class with a 6.822-second elapsed time. In Monday’s elimination rounds Krawiec set the quickest time of the day with a 6.842-second blast at 196.56 mph in round one and then proceeded to charge through the field. His final-round win was the third of the season for the three-time world champion and the 39th of his career.

Harley-Davidson Screamin’ Eagle/Vance & Hines rider Andrew Hines qualified second at 6.825 seconds and advanced to the second round of eliminations on Monday. Hines set the top Pro Stock Motorcycle speed of the Indy weekend when his Street Rod race bike was clocked at 197.22 mph

“This was the prefect weekend to get the new Street Rod bikes dialed in,” said Krawiec. “We’ve been making chassis adjustments for the past three races and it’s finally starting to click for us. It’s great to be hot heading into the Countdown and racing for another championship for Harley-Davidson.”

NHRA Mello Yello Drag Racing Series points will reset for the Countdown, which is held over the final six races of the season. Krawiec will start the Pro Stock Motorcycle playoffs in second place with 2,080 points, 30 points out of first place. Hines is seeded sixth with 2,040 points. 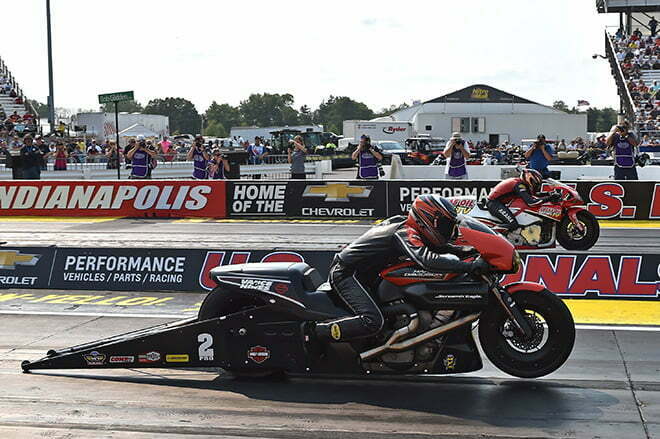 40 Custom Bikes of the Hand Built Show in Austin, Texas

There is a motorcycle show in Austin, Texas, that if you haven’t heard about it yet, you have now been […]