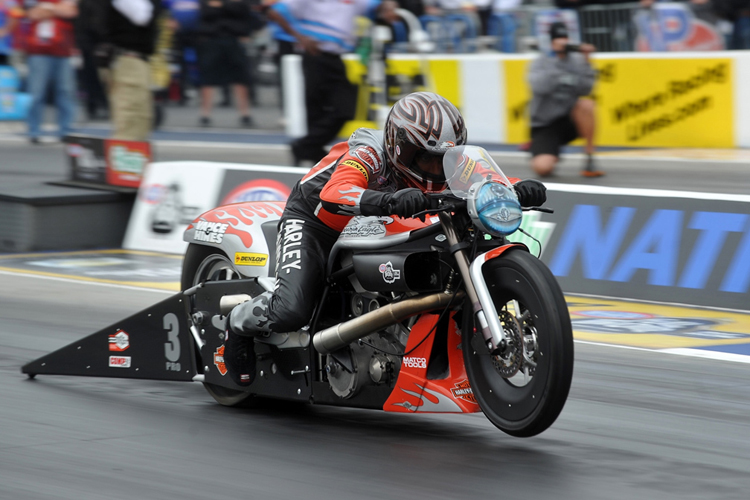 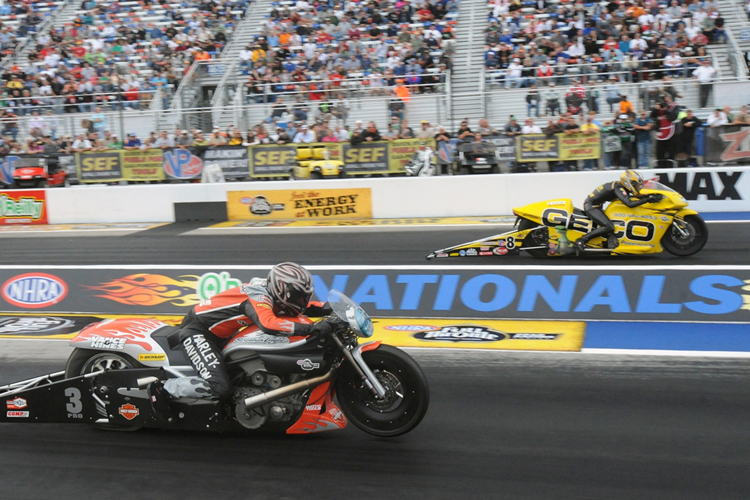 CONCORD, N.C. (September 18, 2011) - Harley-Davidson® Screamin’ Eagle®/Vance & Hines rider Ed Krawiec won the opening round of the NHRA Full Throttle Countdown to the Championship drag-racing playoffs, extending his lead in the series to 63 points. Krawiec rode a Harley-Davidson® V-Rod® to the top qualifying spot for the event, and won four rounds in Sunday eliminations, defeating Geico Suzuki rider Karen Stoffer in the final to win his third event of the season.

“The Screamin’ Eagle Harley team came here with momentum, and we gained ground on the field,” said Krawiec. “Our goal was to leave with a bigger lead than we had when we started. The crew has got me and my V-Rod working on the same page, and with a consistent motorcycle, we will be hard to beat.”

Krawiec opened Friday qualifying with a 6.833-second elapsed time (ET) that set a new track record for the Pro Stock Motorcycle class and held up through Saturday to put the Harley-Davidson rider in the number-one position for Sunday eliminations. Harley-Davidson® Screamin’ Eagle®/Vance & Hines rider Andrew Hines qualified the team’s other Harley V-Rod in seventh position at 6.914 seconds.

On Sunday, Hines got a win over SAF & Motorcycles Specialties rider Jerry Savoie in the first round. In round two, Hines fouled at the start by 0.006 seconds and lost to Buell rider Matt Smith.

“We made some adjustments on my bike between rounds, and when we did that we lost the clutch set-up, which caused the red light,” said Hines. “We plan to stay here and test on Monday to get things dialed in again for the next race.”

Krawiec defeated Suzuki rider Steve Johnson in the first round on Sunday, got a win in round two when the Lucas Oil Buell of Hector Arana Jr. broke at the starting line, and used a 6.813-second blast to defeat GottSpeed/Star Racing Buell rider Michael Ray in the semi-final round. In the final, Stoffer fouled at the start to hand the event win to Krawiec.

Krawiec opened the Countdown with a 30-point lead, and with four elimination round wins, plus bonus points for leading qualifying, the Harley rider heads to the second of six Countdown events having more than doubled that margin. Krawiec now leads the Pro Stock Motorcycle class with 2237 points. Stoffer has 2174 points and moves from third to second place. Smith, who lost to Stoffer in the semi-finals at Charlotte, is third with 2121 points. Hines is fourth with 2113 points. Nitrofish Suzuki rider LE Tonglet lost to Smith in the first round at Charlotte and drops from second to fifth place with 2111 points.

The second round of the Countdown to the Championship is the 26th annual AAA Texas NHRA Fall Nationals, Sept. 22-25, at the Texas Motorplex in Ennis, Texas.

Everybody knows stock sucks. That’s why there is an entire segment of the motorcycle market dedicated to making riders’ bikes […]