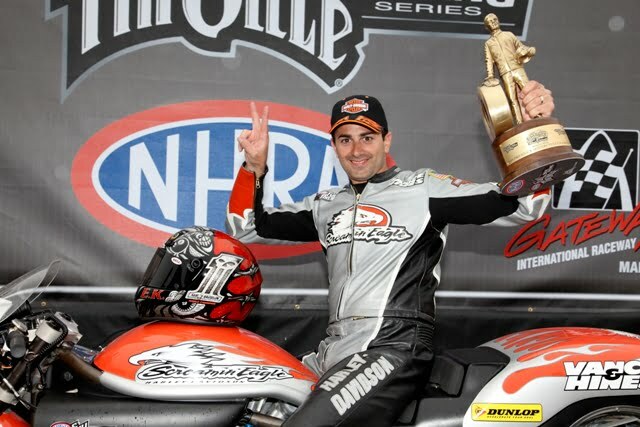 MADISON, Ill. (May 3, 2009) – Screamin’ Eagle®/Vance & Hines rider Eddie Krawiec rode a Harley-Davidson V-Rod® to a final-round victory over Craig Treble to win the NHRA Pro Stock Motorcycle eliminations at the O’Reilly NHRA Midwest Nationals at Gateway International Raceway. It was the second-consecutive NHRA event win for Krawiec, and moves the defending Pro Stock Motorcycle champion into the season points lead.

“I’m riding with a lot of confidence right now,” said Krawiec. “I’ve got a good motorcycle, the team is making great tuning calls and I know I can win. Craig Treble is a respected veteran of this class, and to beat him you’ve got to really be on your game, so that makes this win extra-special.”

On Saturday, Screamin’ Eagle/Vance and Hines rider Andrew Hines set a new national Pro Stock Motorcycle elapsed-time record with a run of 6.860 seconds at 192.14 mph and claimed the number one spot in qualifying for the O’Reilly Midwest Nationals. It was the third straight number one qualifier for Hines and the 25th of his career.

“My brother (crew chief Matt Hines) put a great tune-up in the V-Rod, and we made a nice run,” said Hines, who has now held the national ET record four different times. “It did not feel like a record run, and I didn’t know it was that quick until they told me at the other end that I was the number-one qualifier. I don’t think we’ve held the record since 2005, so it’s good to get that back for the Screamin’ Eagle/Vance & Hines Team.”

Krawiec qualified second with a pass of 6.907 on Friday afternoon.

Krawiec opened Sunday eliminations with back-to-back wins over RumBum.com Buell riders Bailey Whitaker and Shawn Gann, and then defeated NitroFish Buell rider Angie McBride with a 6.900-second pass that was the quickest ET of the day. Hines won his first-round match when David Hope’s VRoom Racing Buell broke at the starting line. A 0.007 red-light foul in the second round against Doug Horne ended the day for Hines.

Krawiec had a perfect reaction time in the semi-final round, and came close again in the final with a 0.009 start to beat Treble (0.020) off the line. Krawiec led the entire run, posting a 6.947 ET to a 6.953 for the Team Scream Suzuki of Treble.

“I had a lot of people tell me that once you get first win, they will come easy,” said Krawiec, who has won two events in 2009 after winning the 2008 championship without an event victory. “I think it’s some vindication for the team to get these wins and take over the points lead.”

After four events on the 17-race 2009 NHRA Full Throttle Pro Stock Motorcycle schedule, Krawiec takes over first place in the standings with 341 points. Matt Smith, who lost to Treble in the second round at Madison, drops back to second place with 325 points. Hines is third with 308 points, followed by Horne with 291.

The next event on the 2009 NHRA Pro Stock Motorcycle schedule is the United Association Route 66 NHRA Nationals, June 4-7 at Route 66 Raceway in Joliet, Ill.

For the past week I’ve been riding a 2012 Harley Davidson Softail Slim. I got to admit, I’m really starting […]

Looking for a quick , easy and inexpensive way to trick out your Harley? Check out Joker Machine’s new Gas […]

Roller Victory Boardwalk Summer time has finally arrived. The sun is out, the weather’s warm, and it’s time to head […]