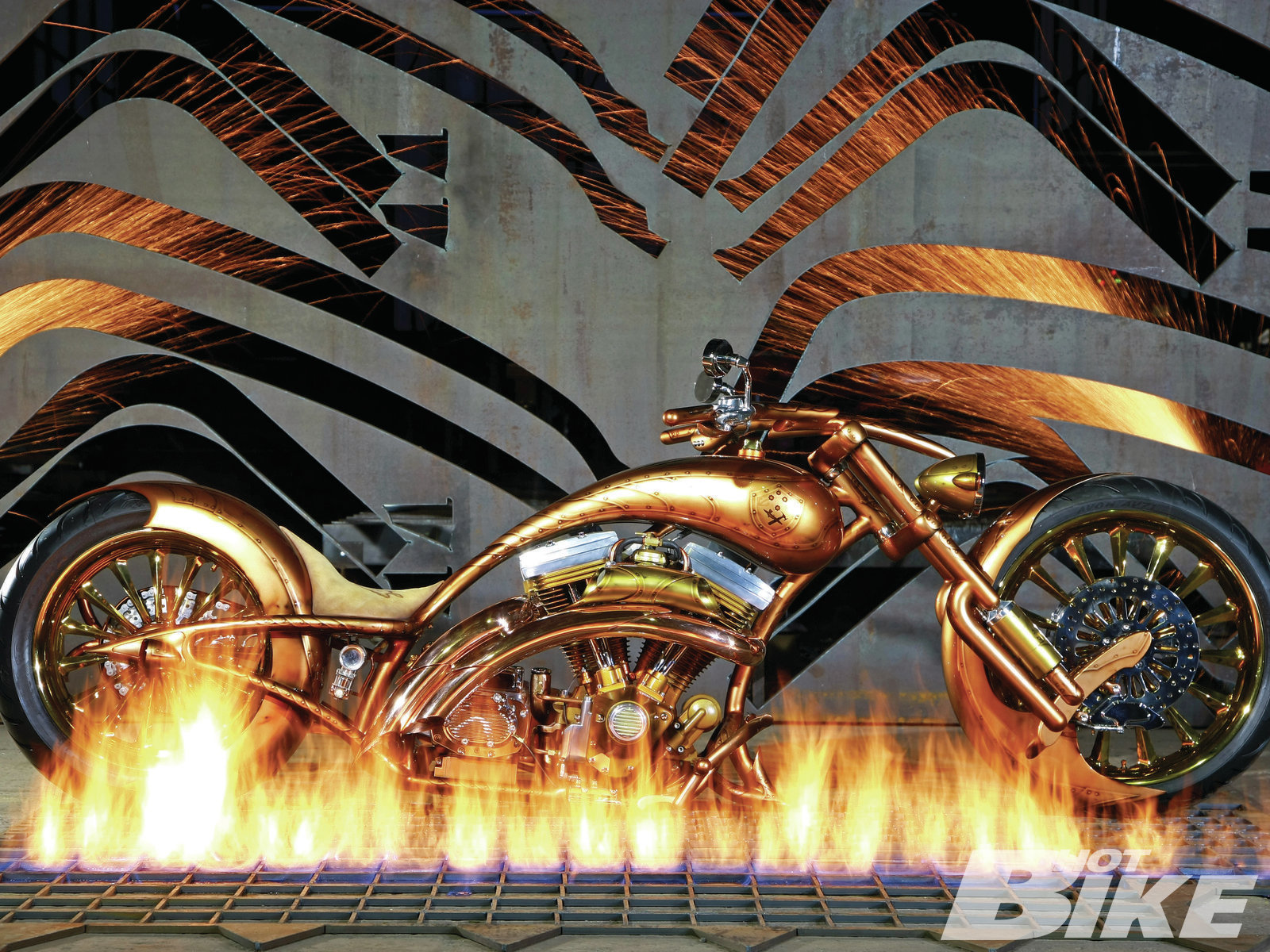 Dave created the custom air ride front suspension with the help of his friends Albow and Precision Profile. The inspiration for this bike, the metal gods themselves: Metallica’s Kirk Hammett, James Hetfield, Lars Ulrich, and Robert Trujillo. 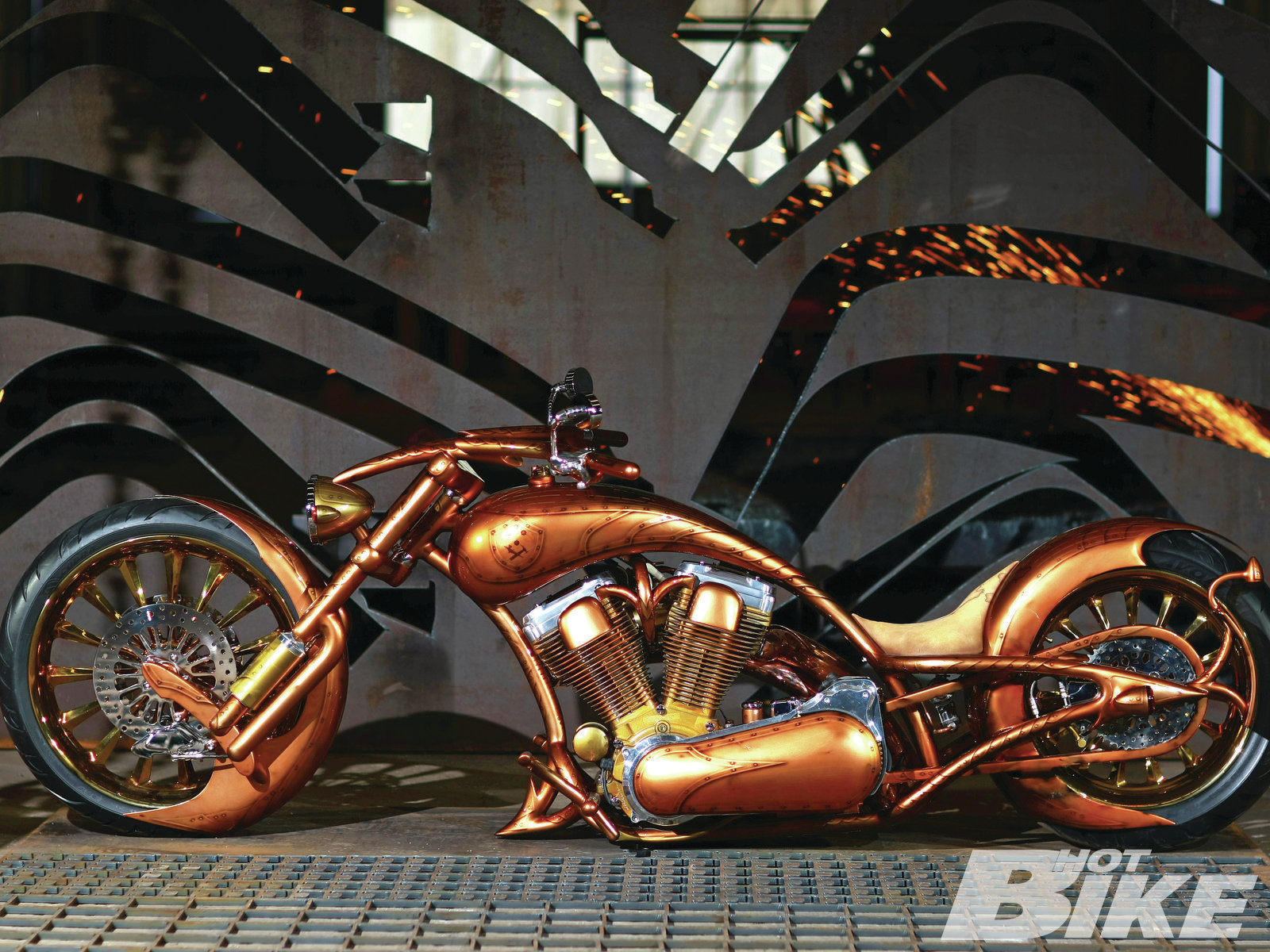 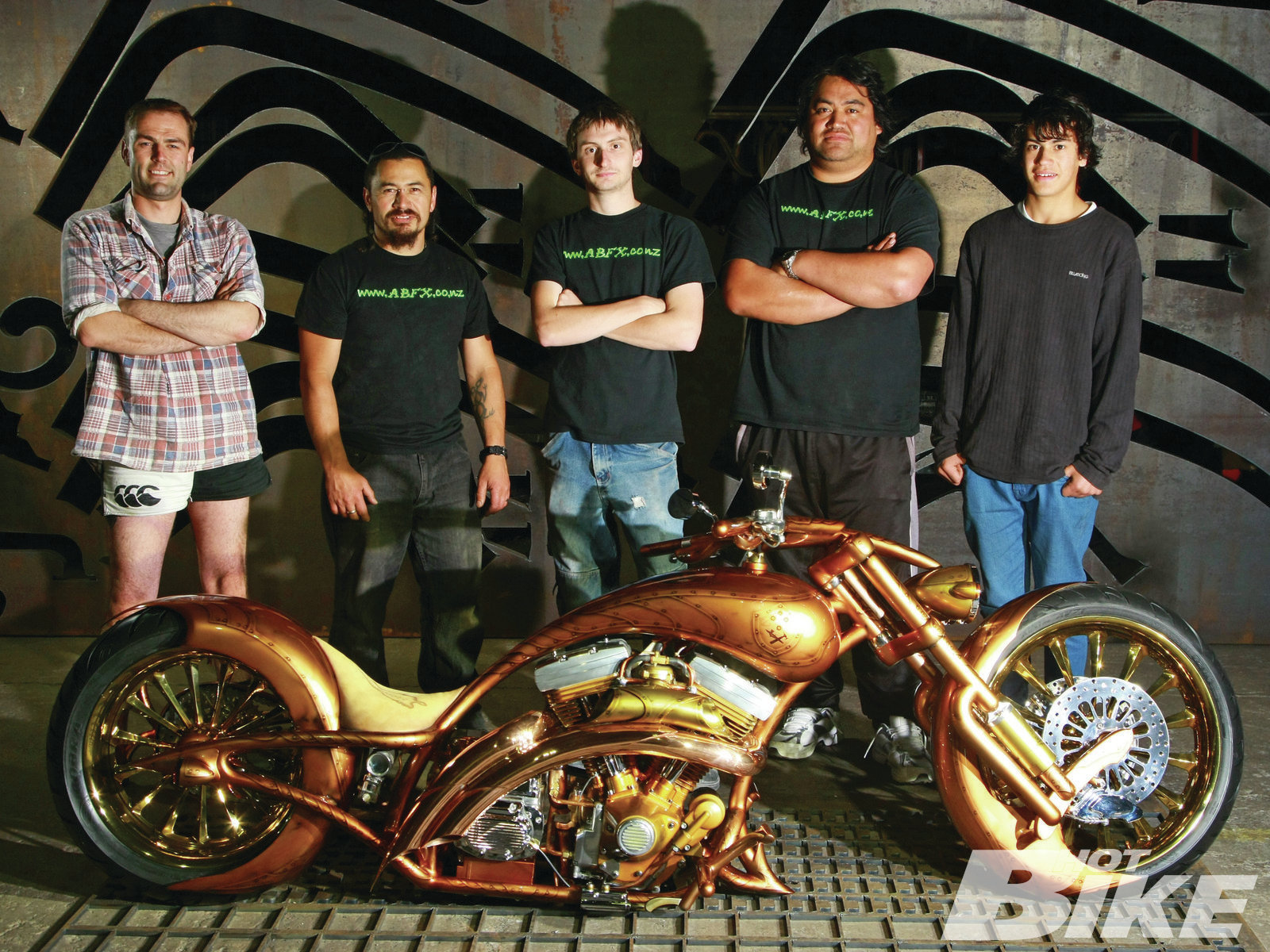 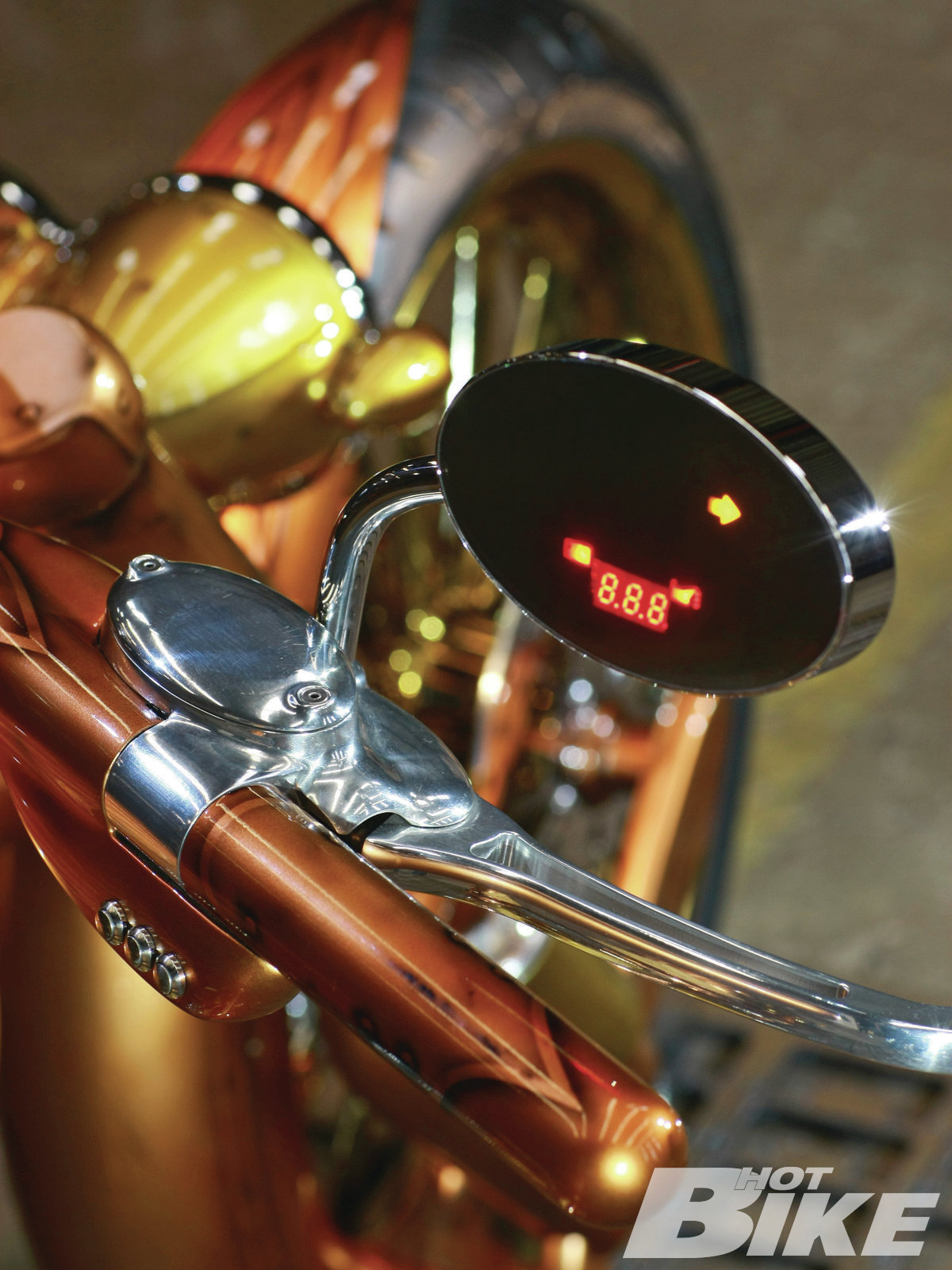 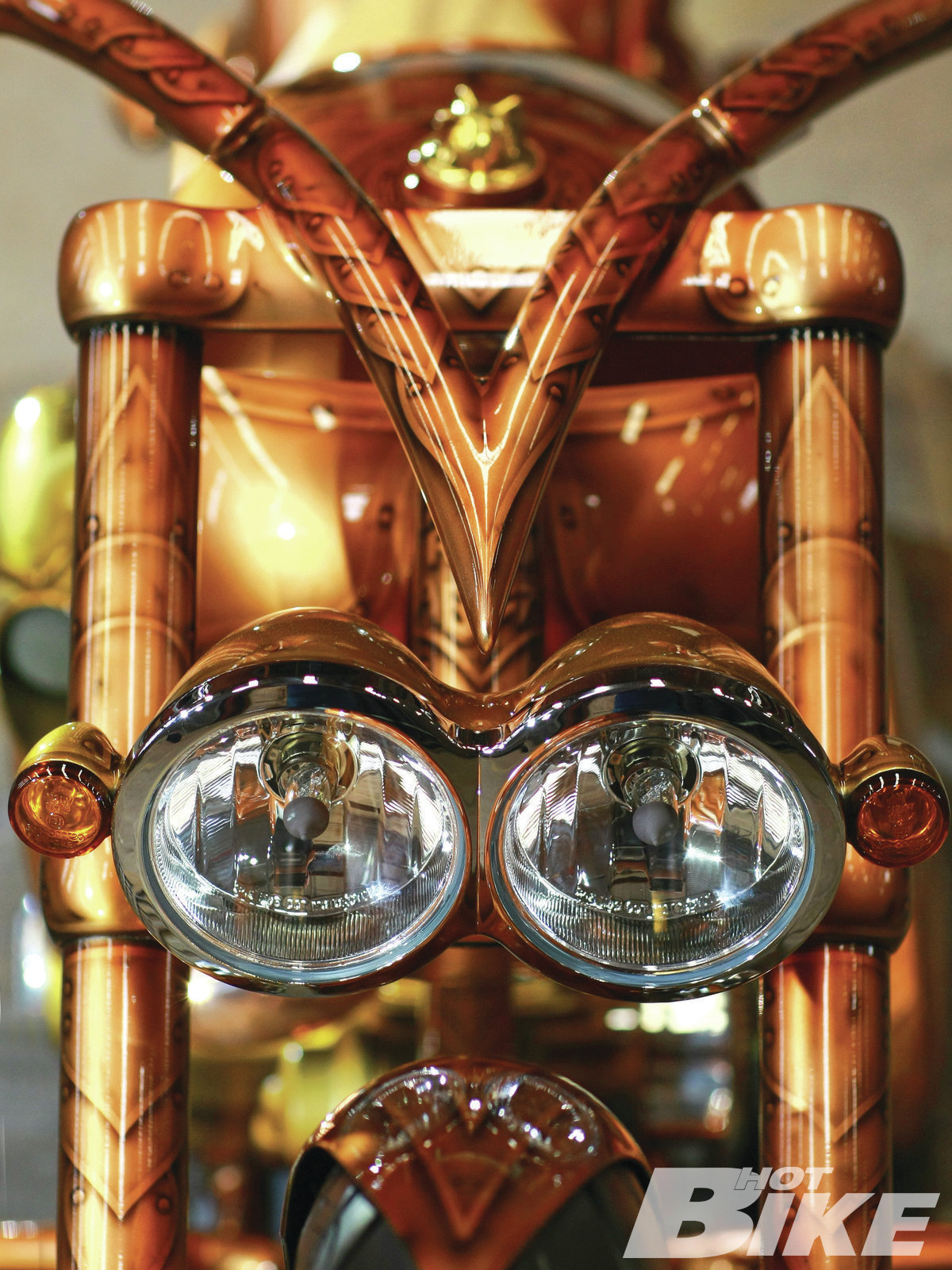 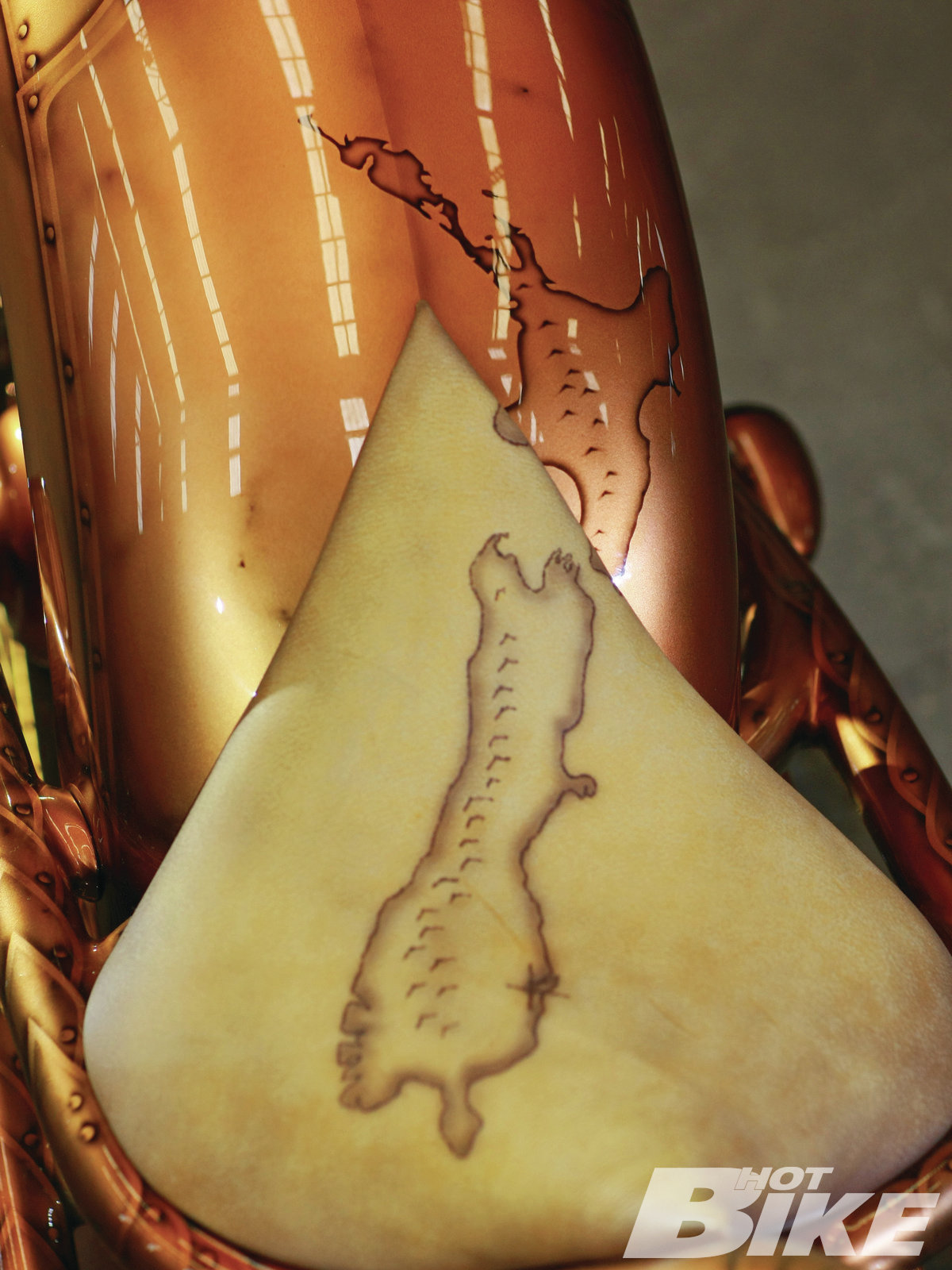 The bike features extensive custom airbrush work with a map of New Zealand on the rear fender that ties right into the seat that was done by Dan the Leather Man.

When Dave Matika had a vision of building a chopper, it didn’t even look this impressive in his mind’s eye. Being a skilled panel beater by trade with his own business, ABFX located in Dunedin, New Zealand, Dave’s no stranger when it comes to reshaping tinware, although he’s done a lot more than reshaping with the creation of his awesome chopper aptly named Metallic-Ah!

With a history of being around bikes, building his own custom chopper was always destined to become a reality, it was just a matter of finding the time to solely dedicate to the project. Well, with a lot of late nights and perseverance, Dave started the wheels rolling, knowing full well there were some challenges ahead of him. What he didn’t know was that it would take him five years.

Right from the initial plans, Dave envisioned something low with sexy curved lines all the while keeping everything clean by concealing as much as possible. Most would agree there are much easier ways to build a bike, but when you want to build something unique, you have to be ready to overcome and think laterally. Besides, it may not be easy building something of this caliber, but it’s definitely more rewarding.

Kicking it all off was a ’10 Chop Rod frame which was raked 45 degrees and modified at the rear with a hardtail and dropped seating position. The 1340cc Evo motor was left stock with reliability the main objective, although Dave did make some changes to the air cleaner and pipes to ensure the whole package was breathing more freely. There are some very innovative modifications that need mentioning, such as the remote key ignition switch complete with internal wiring and no key barrel. The gauges are impressive, being displayed in the mirrors by a digital readout thanks to Badlands Motorcycle Products. The hidden effect continues with hidden throttle and clutch cables, even the oil tank is hidden. Helping to complete the wow-factor is a very impressive air-cylinder suspension system built into the frontend. This eliminates any need for a sidestand with the frame being allowed to safely sit on the ground before pumping back up ready to ride away.

“In regards to the Metallica theme, they’re a band Dave has always liked, and they supplied more than enough inspiration with their music providing the perfect atmosphere in a workshop thriving with activity.”

Most of the accessories received the custom treatment at the hands of Dave and his crew including the bars and handgrips, front pegs, gas tank, oil tank, and the seat pan, which was covered in stitched leather. The H-D Fat Bob headlight was slightly modified while the taillight and indicators were altered to cover the rear axle, again concealing as much as humanly possible. Obviously to obtain the flowing lines he was hoping for, Dave also shaped the front and rear fenders himself to achieve that wild long, low, stealth appearance. The final task was the paint and airbrush work which was also performed by Dave and his staff at ABFX, laying on a special effect PPG Copper Kandy color completed with some very stylish airbrush designs of the four members from the world-renowned rock group Metallica and a map of New Zealand across the fenders.

In regards to the Metallica theme, they’re a band Dave’s always liked, and they supplied more than enough inspiration with their music, providing the perfect atmosphere in a workshop thriving with activity. So why not dedicate such a wild custom chopper to the kings of metal? Who knows, they might even make Dave an offer too good to refuse.

Although before any of that can happen, Dave needs to thank a few individuals for making such a project possible: his loving family Ruth, Trinity, Shimmah, and Avana were priceless with their ongoing support, the crew at ABFX for helping out, and of course some of the establishments such as Imperial Freight, Precision Profile, Faast Fitt Battery, Wren’s Automotive, PPG, McIver & Veitch, E.B’s Engineering Solutions, MCR, Gilmour Motors, and Moto Extreme who all went beyond the call of duty to supply Dave with whatever he requested.

It’s definitely a show-stopping custom built with so much ingenuity that it demands attention. It’s probably the reason Dave’s trophy cabinet is rapidly filling. It definitely illustrates the fact that there are some very talented bike builders in New Zealand, sometimes it’s just a matter of finding them. HB

Yeti’s newest addition to its amazing line of coolers is the Yeti Hopper Flip 12. This cooler features a cubed […]

Neck Gaiters That Provide Protection From The Wind, Weather, Or Sun

With the variety of neck gaiters out there you can find one that best suits your personal style. Amazon Open-face […]

How to Install Feuling Cams