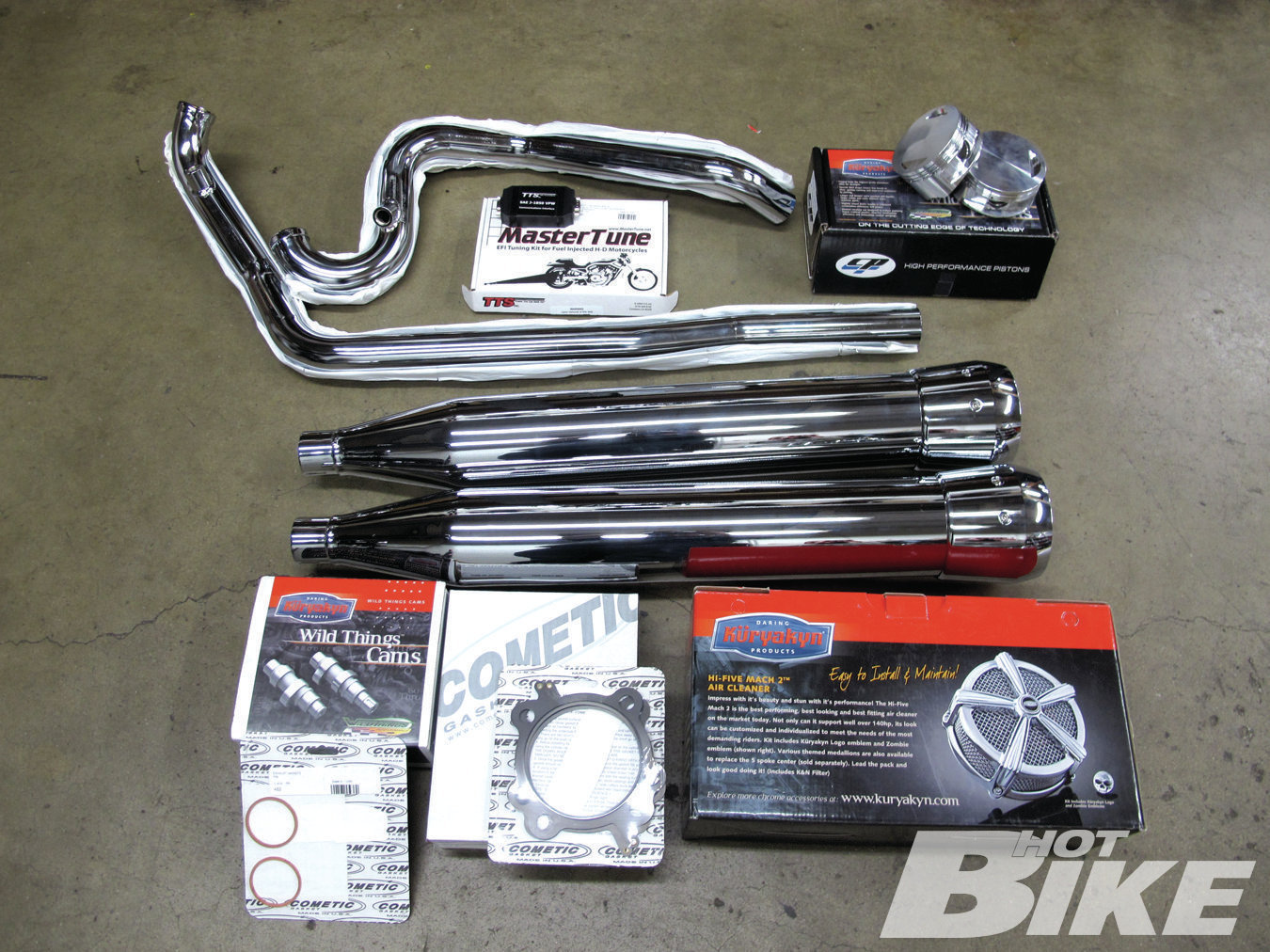 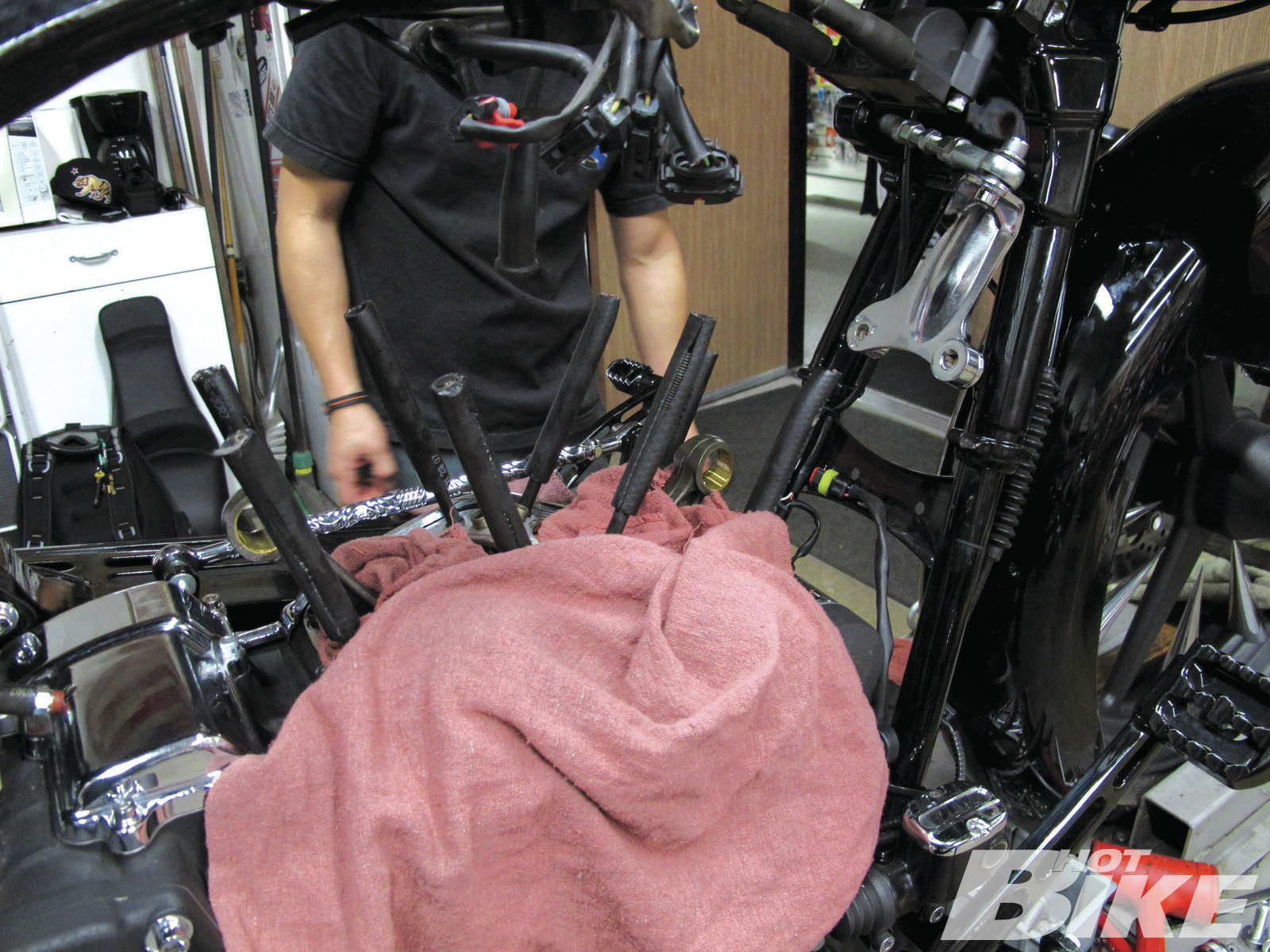 02. Knowing that we wanted to shoot the installation process, Freedom Cycles got a head start on the project by tearing the engine down to the cases so that we didn’t have to wait around for the cylinders to be bored/honed for the 103 pistons. 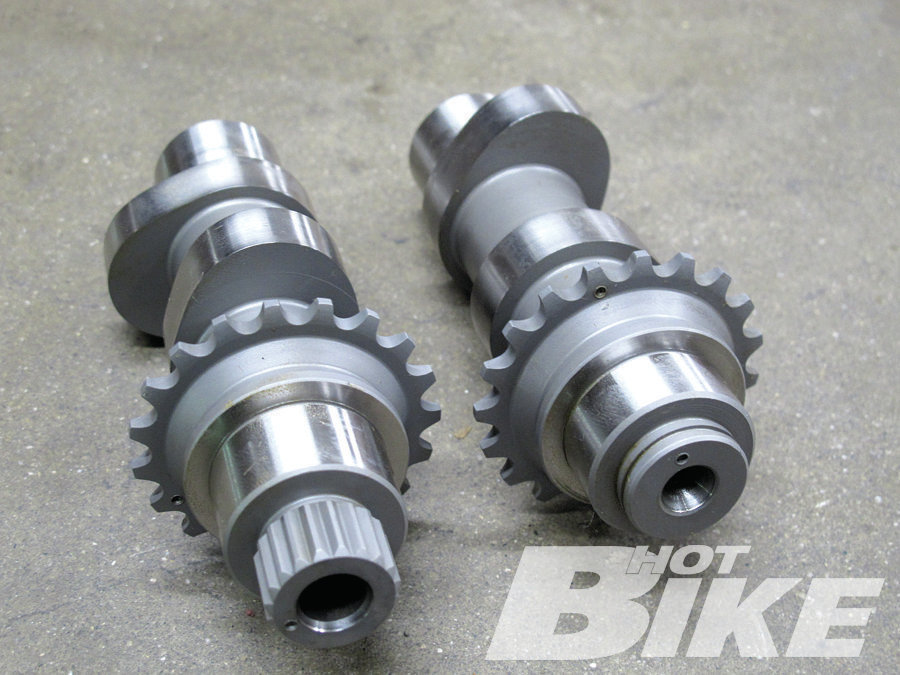 03. Kazoo started the rebuild with the new Wild Things TC-26D cams. As we stated before, Mike designed these cams to help provide nice broad power through the rpm range. Available in both gear and chaindrive applications, Devin decided to stick with the stock chaindrive setup. 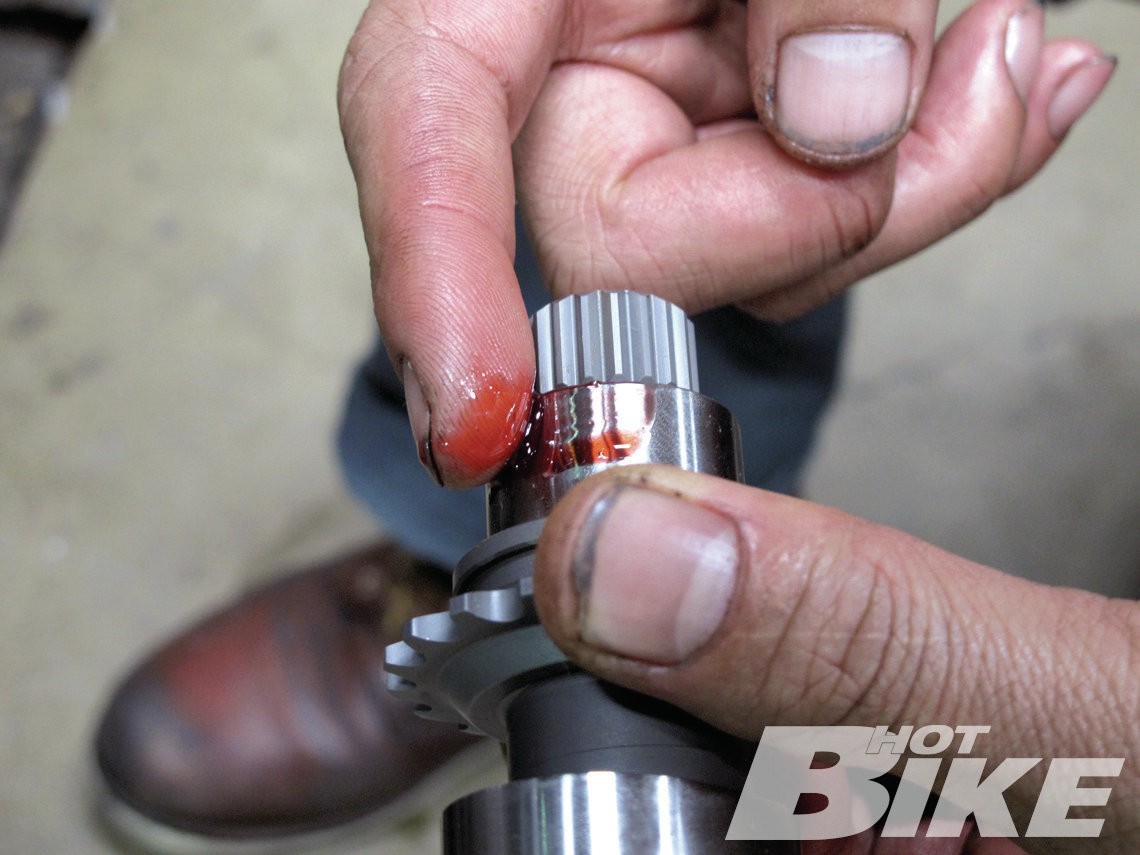 04. Before installing the cams, Kazoo applied some assembly lube to them. 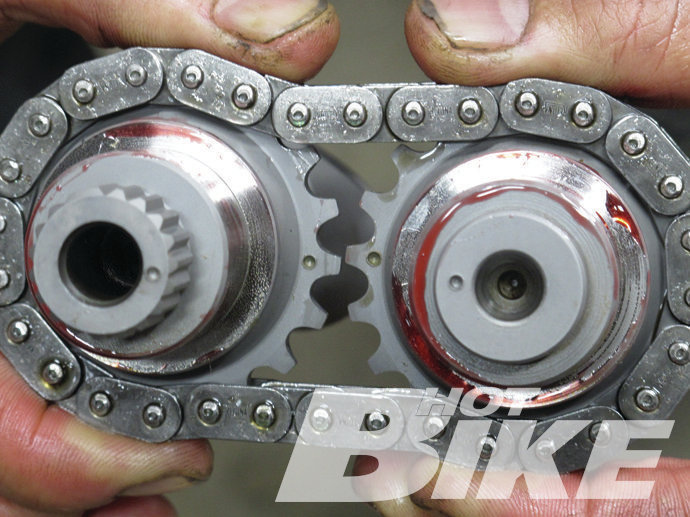 05. Using the stock chain, he slipped the cams in and aligned the timing marks. 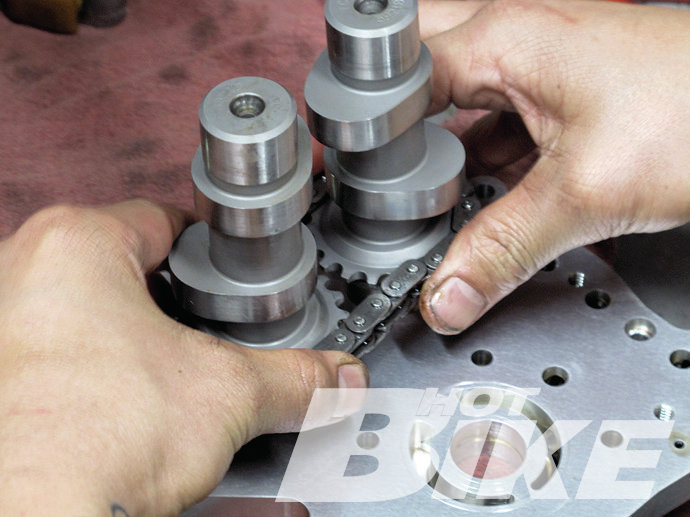 06. The cam assembly was then installed into the cam plate. The bike already had one of Feuling’s billet cam support plates and oil pumps. 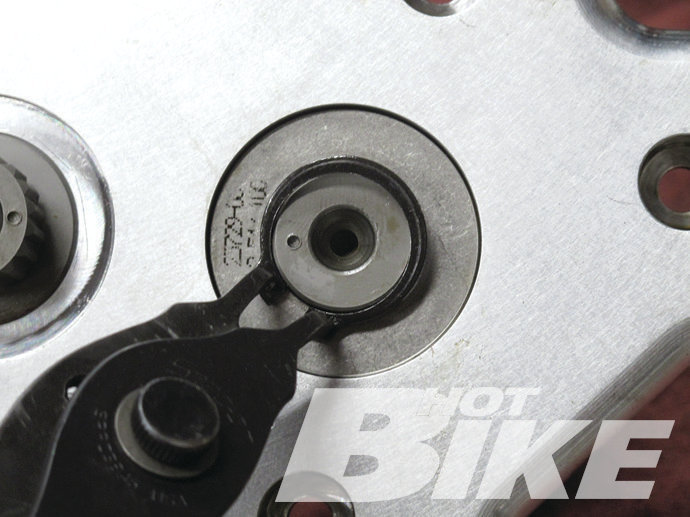 07. Once the cams were properly seated in the support plate, Kazoo installed the retaining ring onto the end of the front cam. 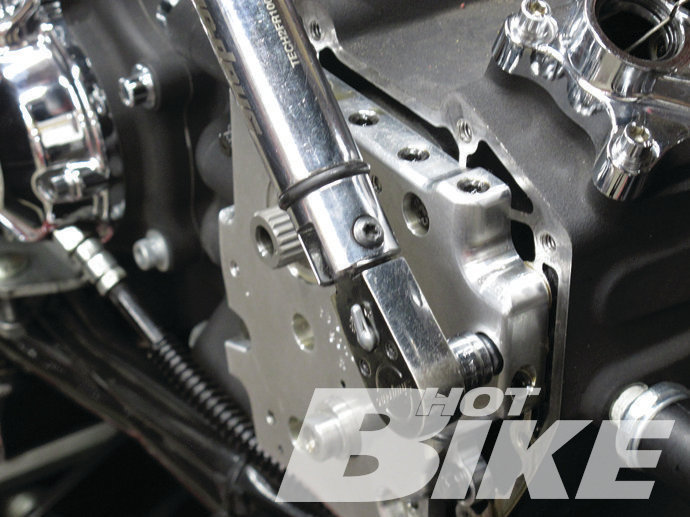 08. With the cams installed, Kazoo then installed new O-rings in the cam chest and then slid the support plate assembly into position. He then followed the H-D manual as to the torque sequence and torque specs for securing the support plate and oil pump. Note, the manual recommends rotating the crankshaft to allow the oil pump to find its natural center before tightening the oil pump screws. 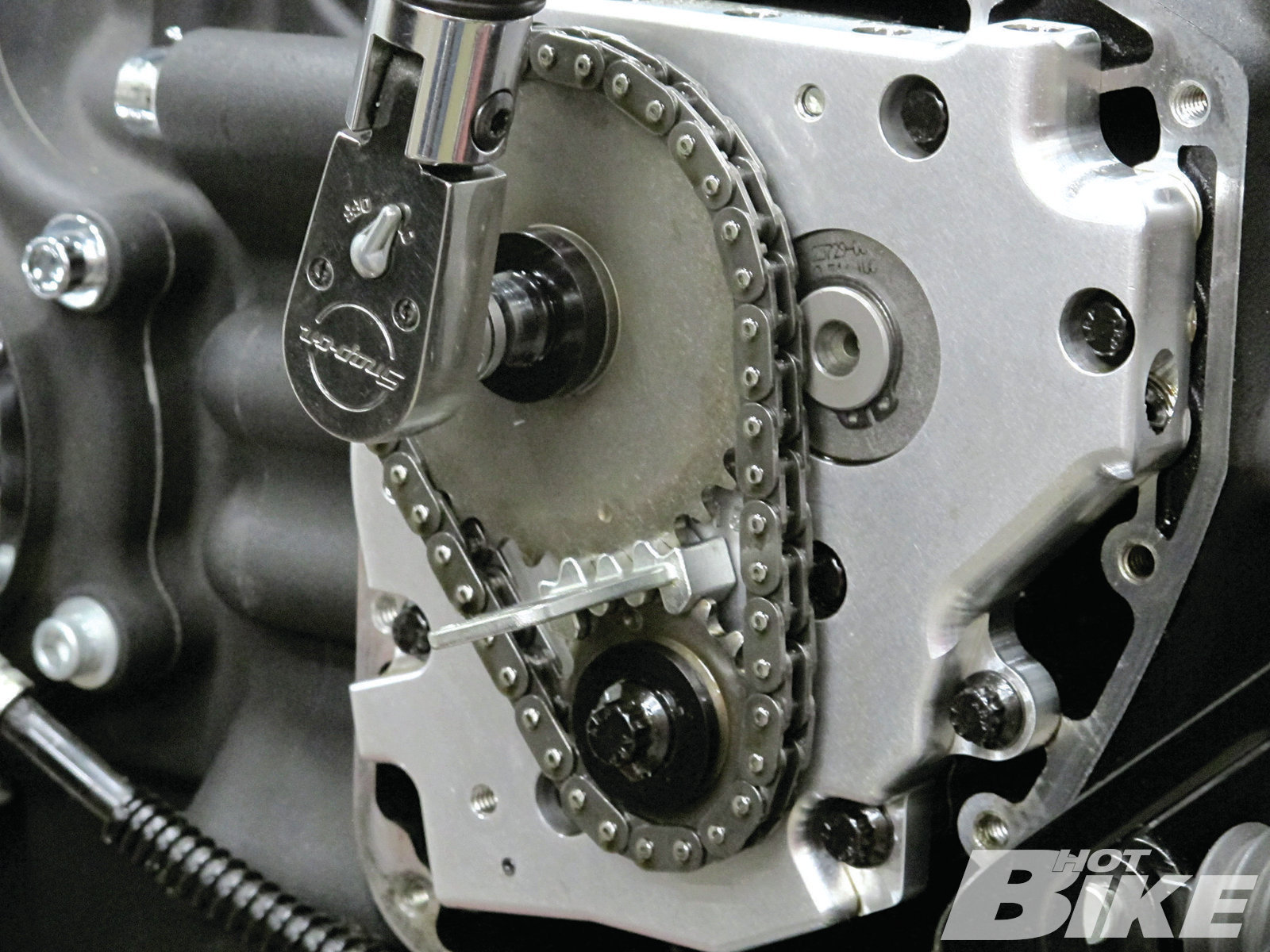 09. Next, Kazoo installed the primary cam chain around the front and rear cam sprockets and slid the assembly onto the ends of the cams, making sure the timing marks on the sprockets were aligned. He then used a sprocket locking tool to keep the sprockets in place as he torqued each sprocket flange bolt to spec.

10. The primary cam chain tensioner was then installed and torqued to spec.

11. With a new Cometic gasket in place, Kazoo buttoned up the cam chest by installing the cover.

12. Even though the Wild Things 103/3.875-inch bore pistons are brand new, Kazoo checked the piston ring side clearance in several locations to make sure everything was to spec. Ring grooves worn out of spec can result in high oil consumption and blow-by of exhaust gasses which can contaminate engine oil and leave sludge in the crankcase. Effectively, this can result in reduced engine efficiency.

13. With the piston ring side clearance, Kazoo then checked piston ring end gap. Improper ring gap can have adverse effects. Too tight of ring gap can lead to the ring edges to abut against each other at engine operation resulting in ring breakage, cylinder scuffing, and/or piston seizure. And just like improper piston ring side clearance, excessive ring gap can lead to high oil consumption, blow-by, and reduced engine efficiency. The rings were a little too tight so the ends were lightly filed down until they met spec. He then cleaned the inside of the cylnders as per the provided instructions.

14. He then installed one piston pin circlip into one end of each of the piston connecting rod bores.

15. Some assembly lube was then applied to connecting rod bushings and then…

16. …the piston was placed over the top of the connecting rod and the wristpin was slid into position, and the other piston pin circlip was installed to lock the wristpin in place.

17. Each mechanic has his own way of doing things. Kazoo, likes to install and set up the piston rings once the pistons are on the connecting rods. Note that he’s got piston marked with an R for rear along with an arrow facing forward to make sure the piston is installed properly.

18. Next, the Cometic cylinder base O-ring was lightly coated with oil and slipped over the bottom of the cylinder. While he had the cylinders and heads off his bike, Devin decided to dress up his engine by having them powdercoated Charcoal Burgundy and had the fins polished for a nice shine.

19. Next a ring compressor tool was placed around the piston rings and the cylinder was slid down over the piston.

20. And there we have it. With the installation of the 103ci Cheap Thrills kit, Devin’s bike is now up to par with the other triple-digit-displacement baggers he’s been running with. Check back next time as we wrap up the install by finishing off the top end and installing the Perfect Storm kit followed by some final dyno numbers.

After logging a good amount of miles on his ’08 Electra Glide, our friend Devin was feeling a little envious of the triple-digit displacement baggers Harley-Davidson offers (110ci CVOs and select Road King, Road Glide, and Electra Glide models with the 103ci PowerPak). And while Devin knew he wanted an increase in displacement, he didn’t want to spend a ton of money or have to crack and machine the cases on his 96ci. Devin wasn’t looking to break any land-speed records or dominate any horsepower shootouts, he just wanted some nice streetable power that would make the bike much more fun to ride. After doing some research, he figured the combination of a Cheap Thrills kit $899.99 (price varies by model and options): Wild Things cams and pistons as well as the necessary gaskets/hardware and a Perfect Storm kit $1,676.99: Crusher True Dual head pipes and mufflers, Hi-Five Mach 2 air cleaner assembly, and Master Tune EFI module) from Küryakyn would fill his horsepower/torque void.

With its vast team of designers constantly creating new products, over the years Küryakyn has become a leader in the industry when it comes to parts and accessories to bolt onto stock Harleys. And for the past eight years horsepower guru Mike Roland has been testing, tweaking, experimenting, and working with the design team on the performance side of things feverishly developing everything from headers and mufflers to pistons and cams. With an extensive performance background that includes setting world records with his personal top-fuel bike, as well as helping others set world records either with parts he’s developed or as a team tuner, Mike knows a thing or two about making engines perform better.

We’re going to be breaking this article up into two parts with the first part covering the installation of the Cheap Thrills components, so we figured we’d provide some insight on the pistons and cams that will be installed.

Knowing that not everyone rides their bikes like they are on the drag strip, and that most people just want nice, even power, Mike developed the Cheap Thrills kit with several goals in mind: easy starting without the need for compression releases, to run cooler than stock, have a quiet valvetrain, and to make a good amount of power over a broad rpm range while still being very street friendly. While the Wild Things 103ci/3.875-inch bore pistons are flat-top pistons, Mike designed them with slightly raised decks so that people won’t have to machine the cylinders or heads to get a tight squish. Setting a proper squish upon installation helps to achieve better combustion and less detonation resulting in a more efficient/powerful burn (we’ll get more into squish in the next article). The pistons also feature larger valve pockets, which allow for larger valves and cams without extra machine work. Some machine work is necessary in the form of boring/honing of the stock cylinders in order to fit the larger pistons. Also these are the same pistons that Küryakyn uses for its 88-to-95ci Cheap Thrills hop-ups.

Through his racing experience, Mike found that with Harley’s Y manifold design and low-volumetric-efficiency motors, they don’t have as much spent gasses as a tuned intake port motor would have and that they have high exhaust-to-intake flow ratios. He found that they ran stronger by using cams with a larger intake lobe and a smaller exhaust lobe, so he designed the cams with the following specs:

The cams were designed to provide a wide power band with solid low-end torque and strong horsepower through extended rpm ranges. Küryakyn offers the cams in geardrive or chaindrive depending on your setup and bike year/model.

Follow along as we watch Kazoo from Freedom Cycles in Anaheim, California, perform the install. HB

Editor’s Note: Every once in a while we’ll get a call about a group of high school kids building a […]

1 Whether it’s for repair or porting, Revolution has taken Brian’s cylinder head experience and best porting designs and implemented […]