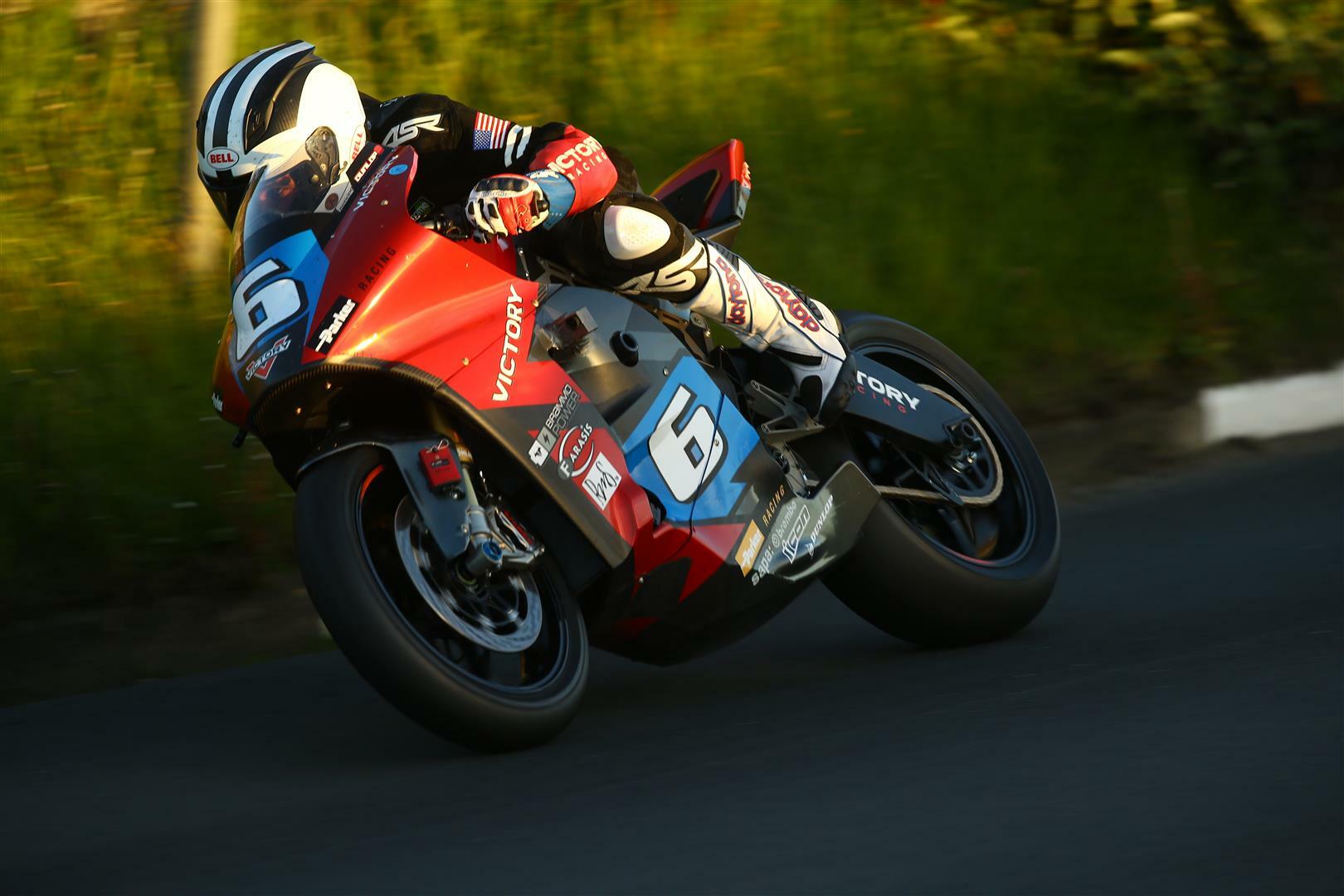 Victory Racing has successfully run its two electric bikes in the first practice session ahead of the TT Zero race. Six racers set out on the practice, but only three crossed the line with two of those being the Victory machines. Getting both bikes back across the line and breaking past 100mph laps on Victory’s first ever attempt at the TT is a promising start.

William Dunlop and Lee Johnston rode one lap of the course, achieving average lap speeds of 104.185mph and 105.185mph respectively. Both riders also achieved 140mph through the Sulby speed trap – testament to the GVM Parker electric motor installed in the machine. This means that Victory is now the third electric bike team to ride over a 100mph lap, something made extra special by doing this on their first ever time around the course. Dunlop completed his lap in 21:43.717 minutes while Johnston was 12 seconds faster, crossing the line after 21:31.322 minutes.

Team manager Brian Wismann (also head of Brammo product development) said this first ever ride of the course by Victory Racing follows a trouble-free week of testing at Jurby. “We are really pleased with our first lap of the TT course,” he said. “Both riders executed clean laps to bring a pair of 100mph+ laps on our first attempt. The reliability of the bikes has been a strong suit for us so far at the TT, with very few technical problems arising. I think this will continue to be a key to being able to translate practice results to race results when it counts.”

Following this first TT Zero practice session, William Dunlop and Lee Johnston were in extremely high spirits. Both said the bikes were extremely stable and coped well with the lumps and bumps of the TT course, something they hadn’t been able to replicate in testing.

Lee Johnston said as he climbed off the bike: “That was just mint. It feels so stable, it’s unbelievable. It’s just so peaceful. No revving.” Asked what the stand out memory from his lap was, he said: “I think just the peace and quiet and riding over the mountain, no noise and seeing the sunset. Everything’s just mint on the bike and I’m ready to go and do more.” Lee also joked: “There were load of people waving iPhones at me when I was out on the course – I wondered if they wanted me to recharge them.”

William Dunlop was equally happy with the bike saying that: “It was surprisingly good, it really was, and I’m not just saying that. It was good to just go out and not have wrestle something with 200hp around.”

The next TT Zero practice session will be on Saturday June 6th with the third and final practice session on Monday June 8th . The TT Zero race takes place at 10:45am on Wednesday June 10th.

The bike has two Brammo batteries that sit on top of one another and they actually form part of the bike’s structure. These batteries sit between a twin-spar aluminium frame with Ohlins suspension connecting the swingarm to the top of the batteries. While Brammo has created the batteries, the electric motor is made by Parker, joining Victory Racing’s TT effort under the name of Parker Racing.

The wheels are forged magnesium, made by OZ Racing and mounted onto Ohlins forks with World Superbike-spec Brembo brakes. The rider’s display is a Motech ADL3, which also records all of the data from the electrical system. 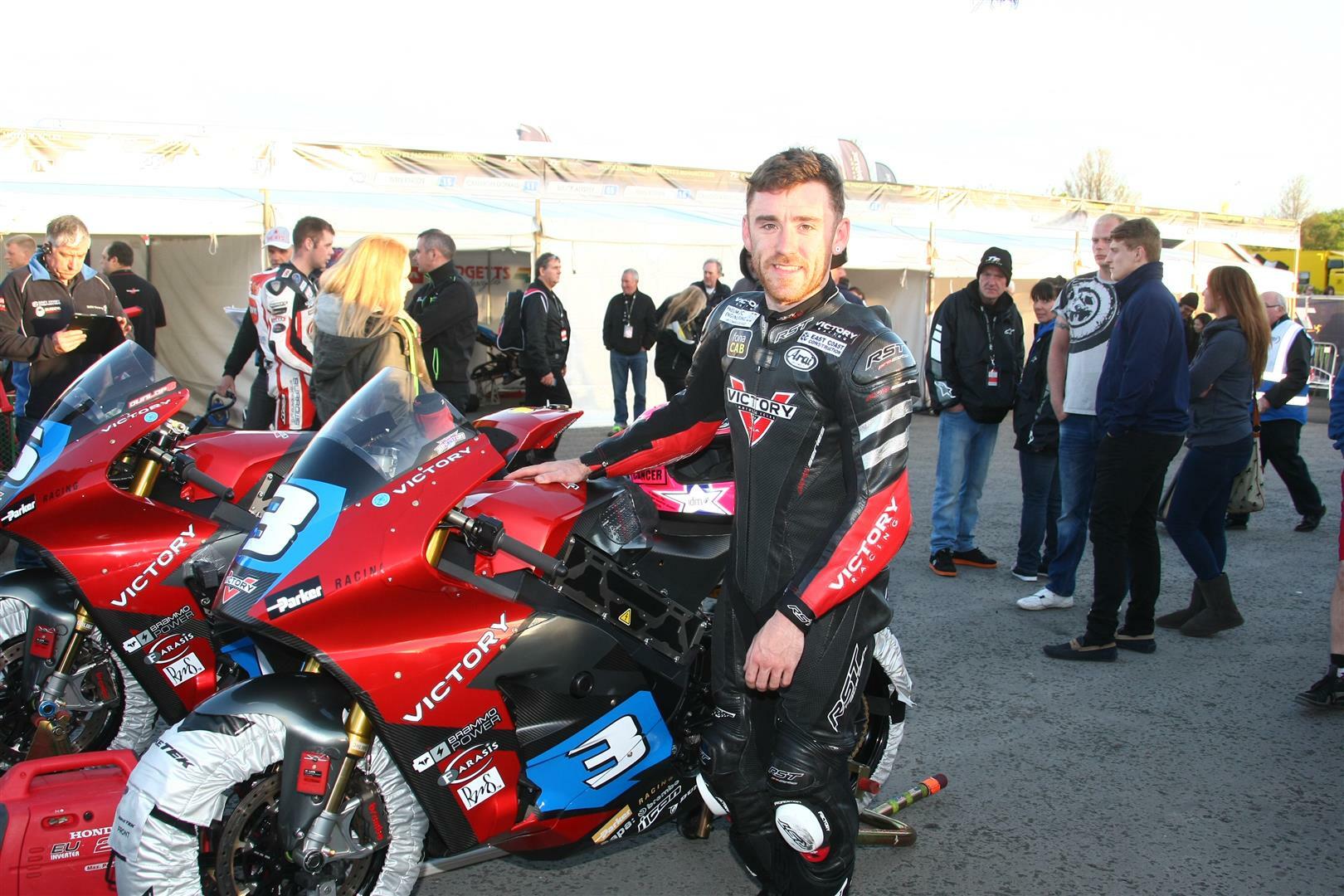 Victory Racing has also announced that the bikes have an in-built energy recovery system, with the rate of this recovery configurable. Interestingly, Lee likes to run his recovery setting some 30% less than William’s. As Brian Wismann explains: “This is all down to riding style and how each rider prefers to get the chassis set for the entry to the corner. William prefers the regenerative braking to be higher to help slow his entry speed.”

Victory Racing has also announced that the electric bike has actually been developed for short circuit racing, so the longer 37-mile length of the TT course poses a greater challenge for setting the bike up for the race. While there are the two Brammo batteries linked to the Parker GVM electric motor, extra ‘boost modules’ can be added or taken away from the bike. Brian explains: “Here at the TT we are running the highest number of boost modules that we can carry. With these on board we can make 165bhp at the rear wheel. The bike in its TT configuration weighs around 220kg, but in its short circuit configuration drops to 209kg.”

Part of the challenge, says Brian Wismann, is to get the maximum amount of power from the batteries and boost modules while making sure the bike has enough electrical energy to get around the course.

Cruisers That Defined The 2010s

One of the biggest splashes of the past decade was Harley’s launch of the reinvented Softail line in 2018, with […]

Oven Mitts To Keep Your Hands Safe From The Heat