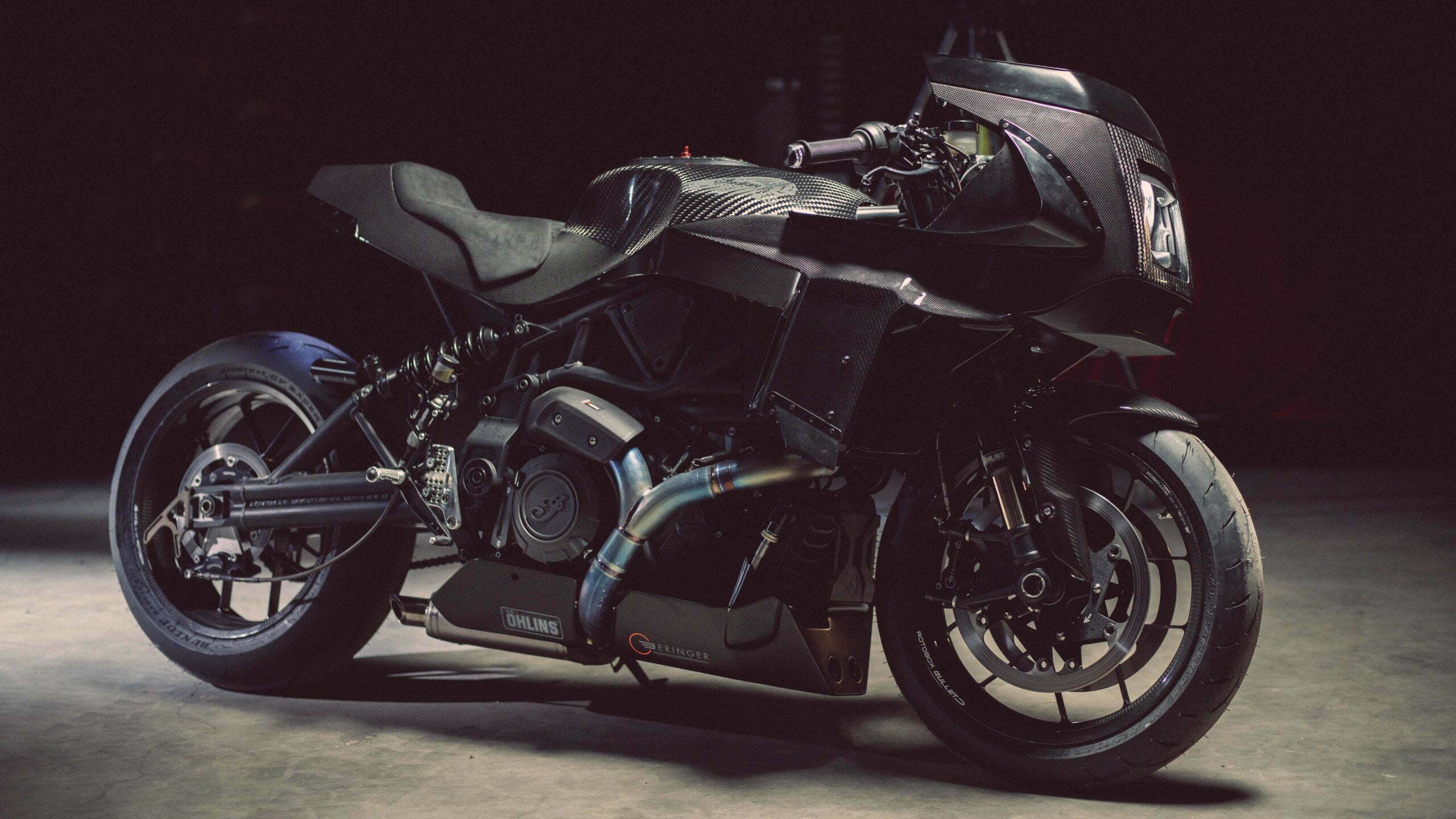 Hot on the heels of the Workhorse Speed Shop FTR AMA comes Black Swan, a totally different take on what can be achieved with the Indian FTR1200.

Black Swan was a concept that Workhorse Speed Shop founder, Brice Hennebert, conceived several years ago when racing at Wheels & Waves against Miracle Mike, the Indian Scout by The Young Guns. As with the Workhorse FTR AMA build, the style inspirations come from multiple directions and eras, 90s superbikes, modern Grand Prix racers, and even Rauh-Welt tuned Porsches. 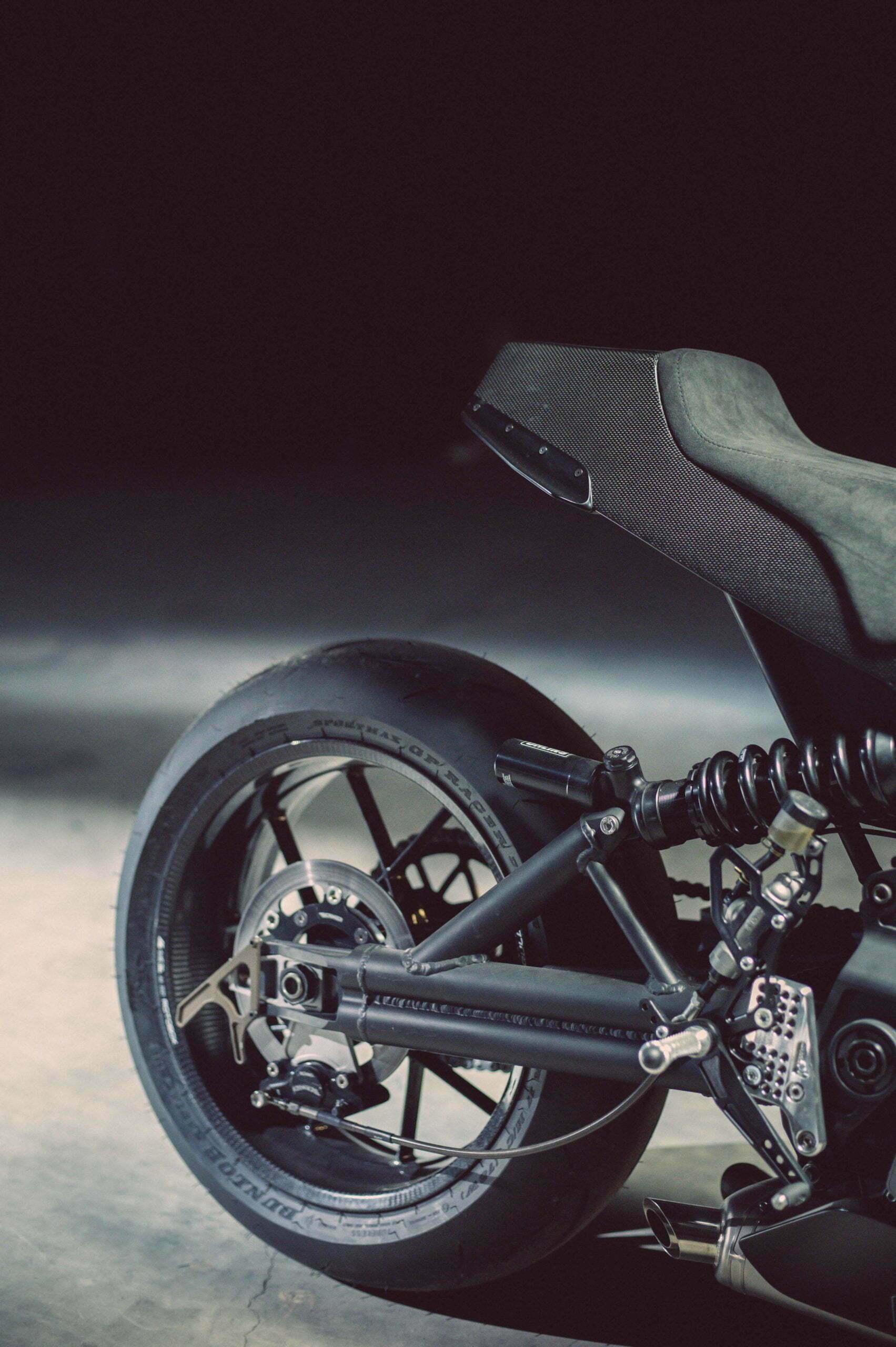 “During that time, I had the vision to build a sports bike for road use, really sporty, built like a GP bike. It’s deeply inspired by 90s sports bikes, all made from carbon fiber. The owner of the bike gave me total freedom around the project. So, I pushed all the levels to my maximum. That’s what happens when I have total freedom from the commissioners of a project. It’s pretty unique and the most complicated build I’ve done to date.” said Brice. 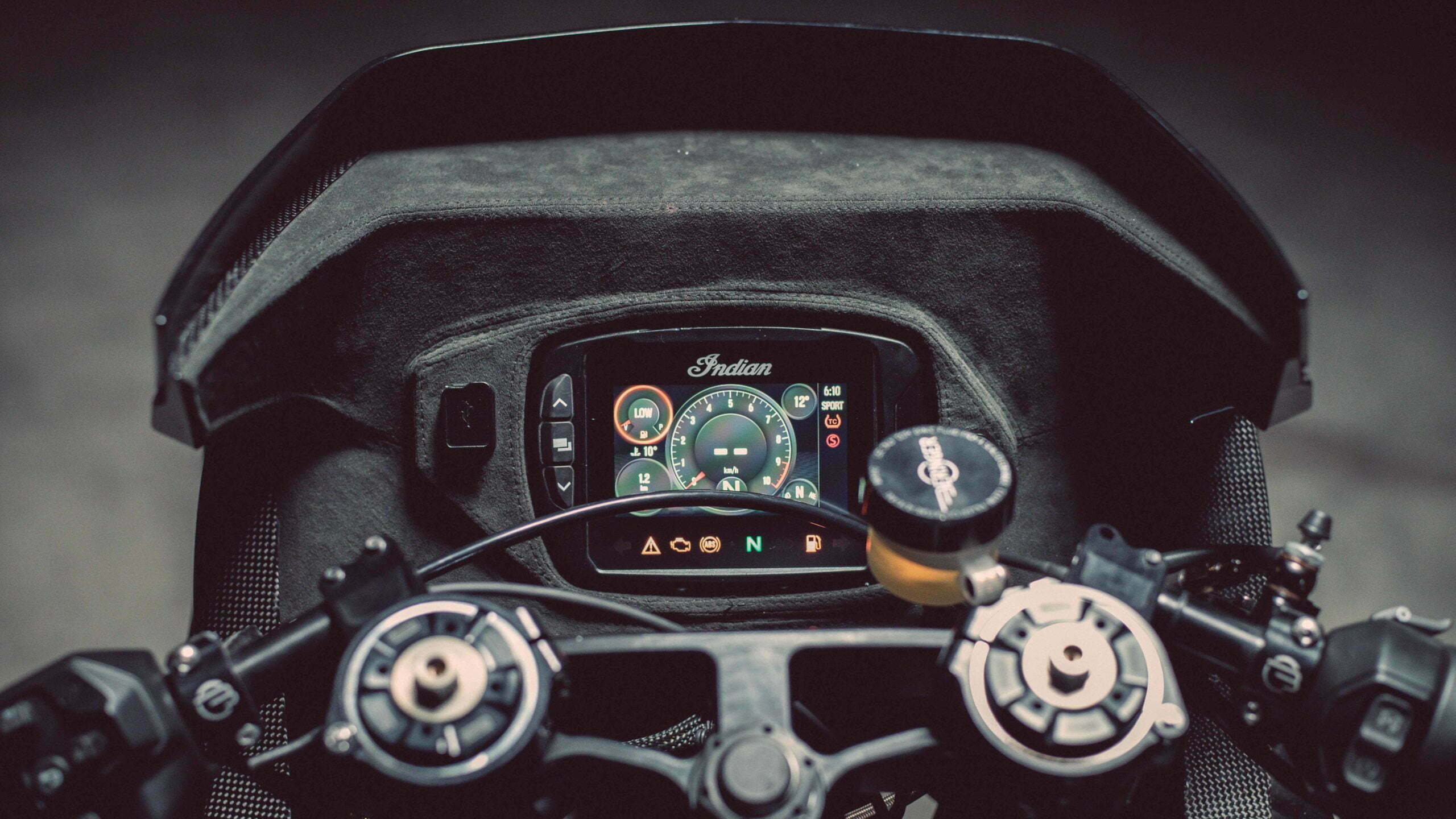 After preliminary sketches, Brice took a trip to Akrapovič HQ in Solvenia to help fabricate the beautiful 2-1 exhaust system, with the underslung muffler keeping the sleek profile Brice envisioned.

Back at Workhorse Speed Shop, having narrowly avoided being delayed in Solvenia by the closed borders happening around the world at the time, Brice constructed a wire mesh around the FTR as a base on which to model the bodywork in clay. 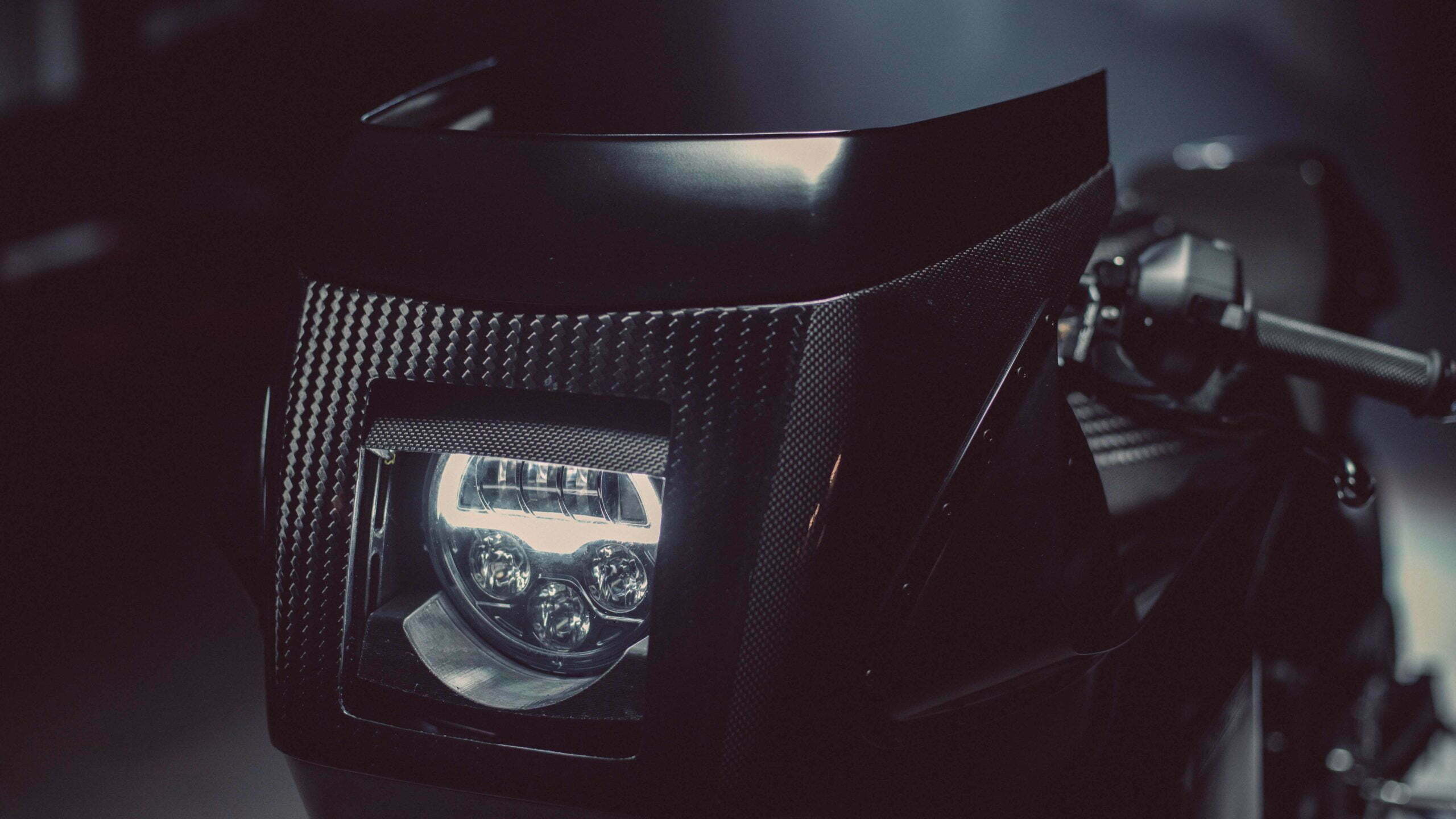 “This step was actually easier than I expected because I did not need to create a full symmetric body in clay, just one half of the bike as a master. Once I was happy with the shape, I used a 3D scanner to pass the form to Formae Design who worked with me to refine the virtual model, create the full-body symmetry, and integrate all the accessories and fittings. Christophe at Formae helped me a lot with all the different components of the body.” 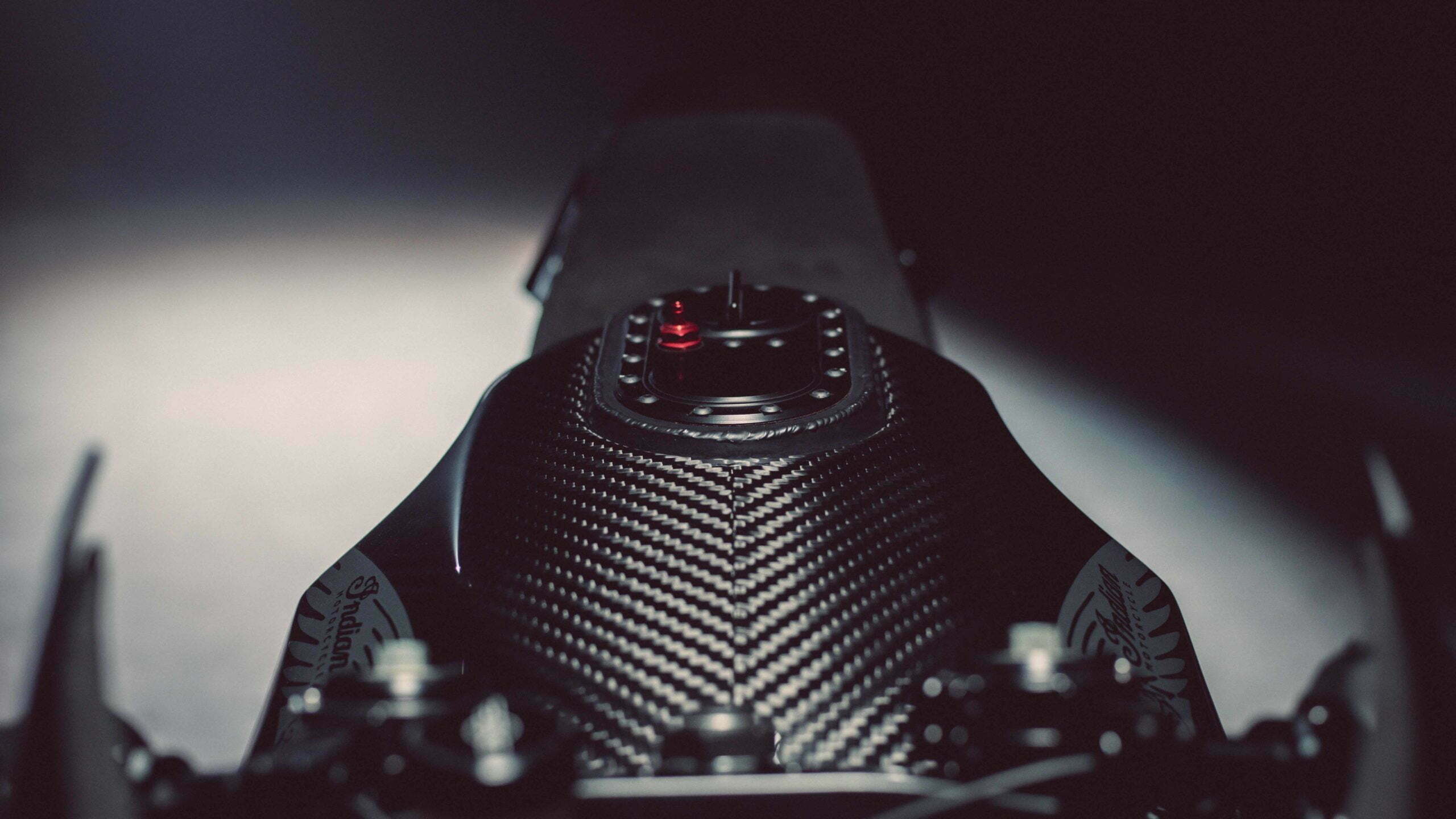 While Formae perfected the body design, Brice turned to chassis modifications such as the fuel tank fabrication around the original air intake system. Tim from Vinco Racing Engineering helped with a lot CNC machined components from Brice’s designs such as the swingarm fitting, chassis plates, triple trees, fuel cell components and more. 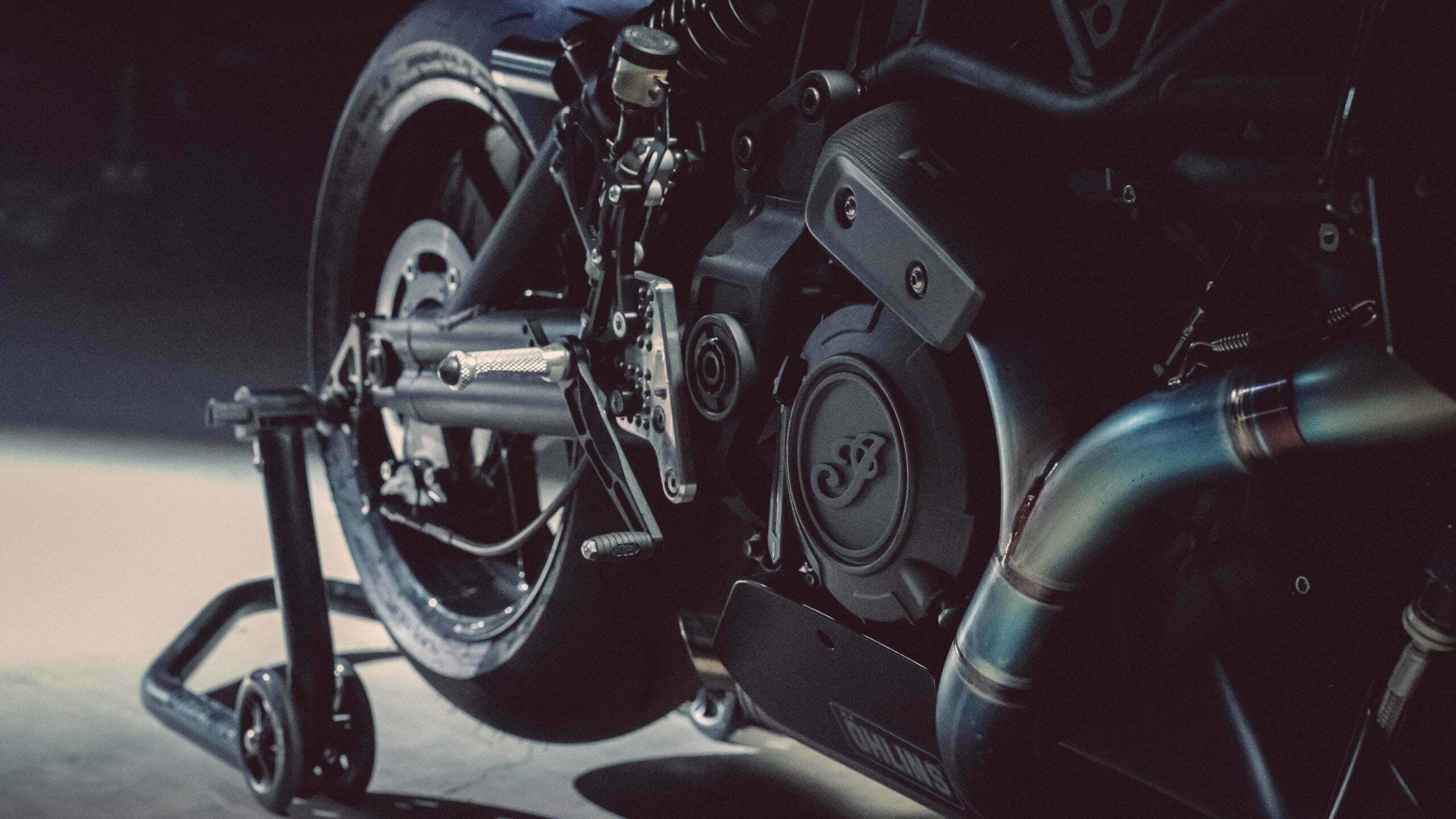 “As I’d decided to show off the carbon fibre and not paint it, I gave Robert the freedom to choose the carbon weave that would look the best and still work with the design I had given him. After a few weeks of waiting, he came back with this hell of a piece. The whole body only weighs about 1.8kg. Creating the bodywork was a major part of the build, everything but practical, but I was determined to have a one-piece body.”

With the body now realized, including an aluminum bellypan for better resistance to exhaust heat, Brice now had to implement one of his primary ideas, a system to dramatically reveal and hide the headlight. 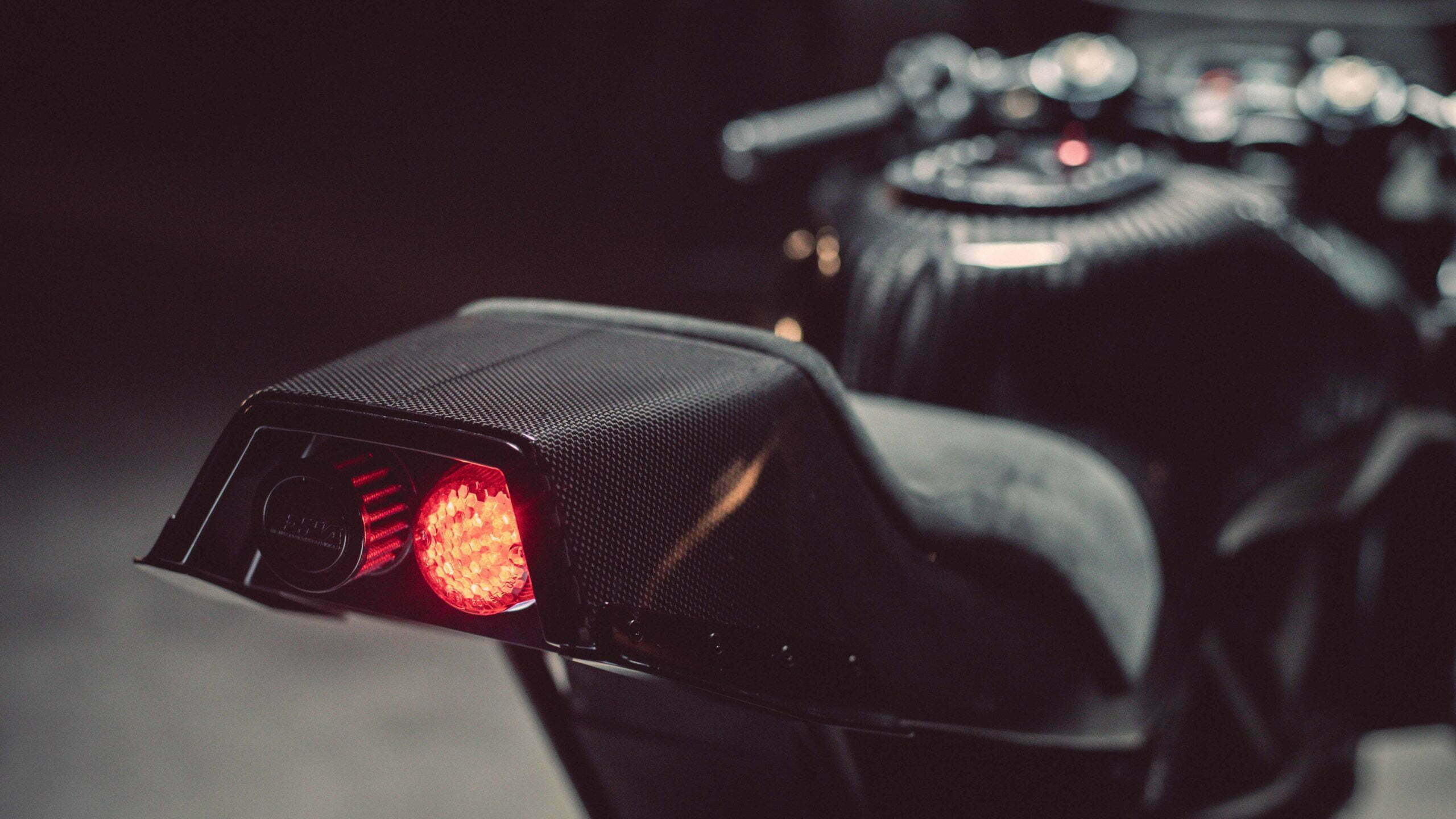 “That was one hell of a struggle for me. It may look simple and easy for some people, but for me, that was quite a challenge. The ‘eyelids’ are driven by two stepper motors controlled by a Arduino for cinematic opening and closing.”

The effort was definitely worth it. With the carbon body, closed ‘eyelids’ and the 3D printed elements on the body, Black Swan really lives up to its name. The use of 3D printing – a feature that Black Swan shares with the FTR AMA build – allowed Brice to accent the body shape quickly and simply in a ‘wink’ to the wide-body kits in Japan, mixing high-performance competition style and street mods. 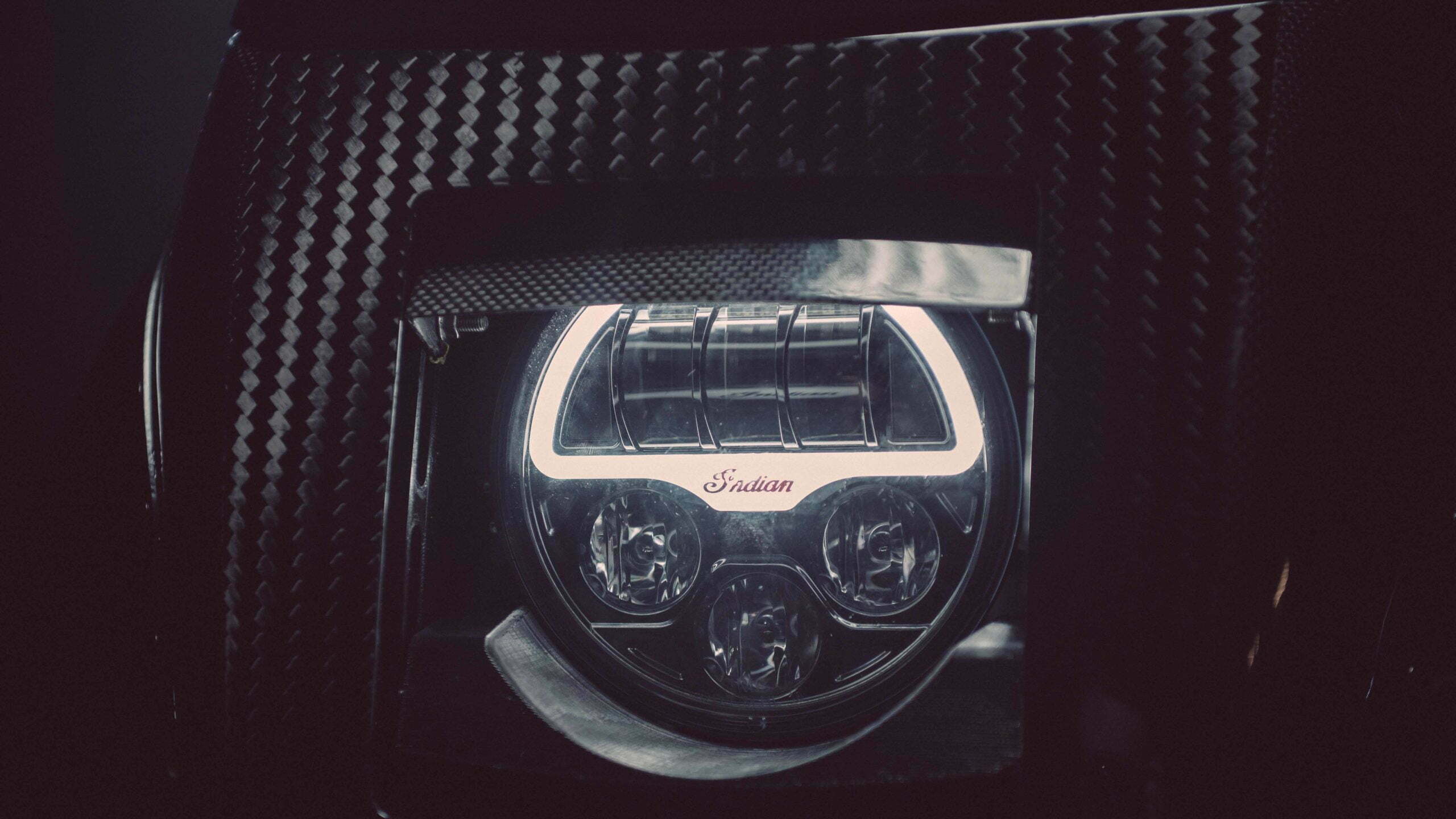 Always looking to add as much fabrication to a build as possible, the details that set Workhorse builds apart, Brice fabricated a new swingarm from 7020 aluminum. Retaining the original suspension mounting point, Öhlins Racing provide a special piggyback shock in black to match the overall theme, complemented by special black front forks. 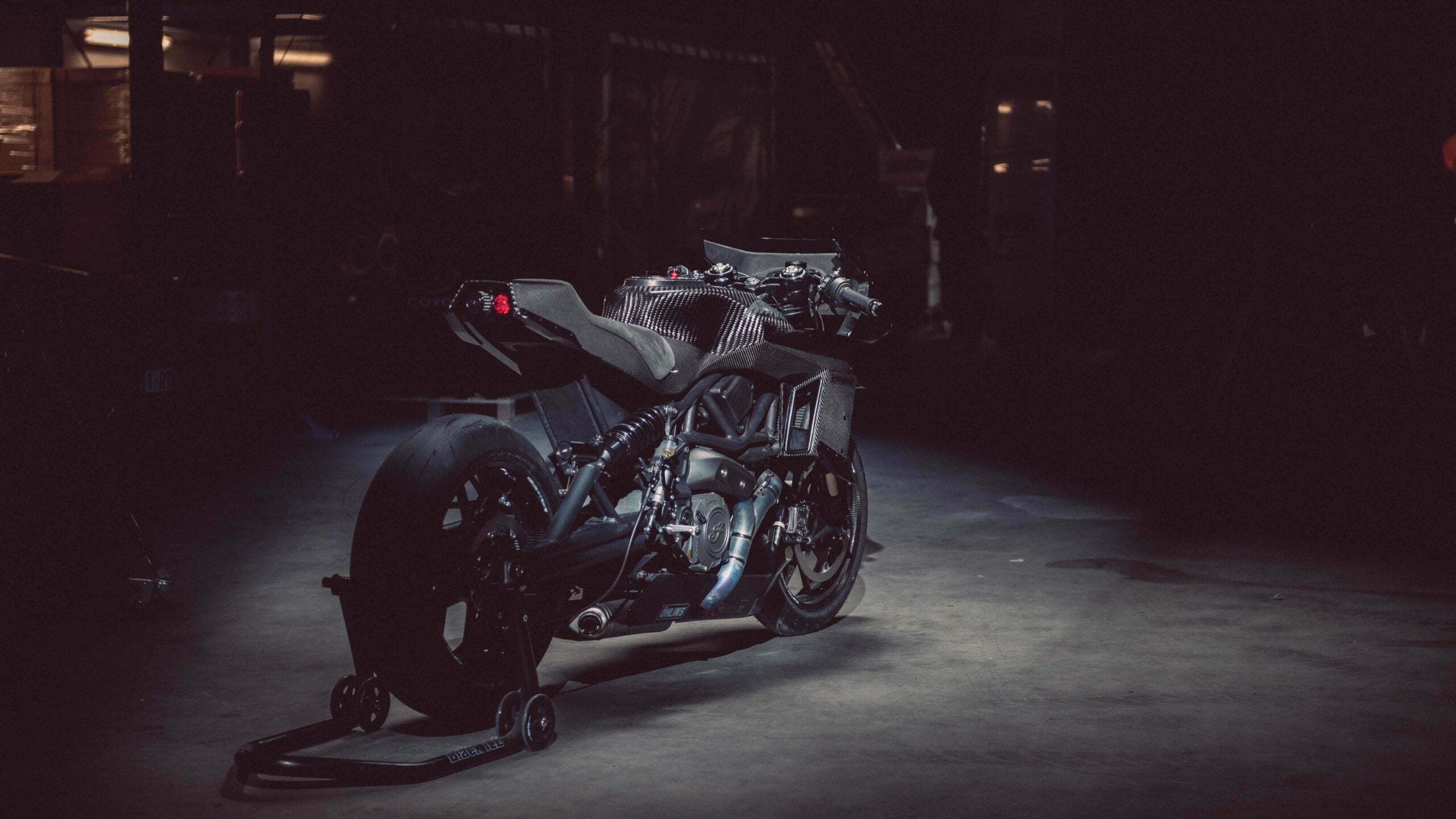 “The braking system is from my dear partner Beringer. They offered the use of a prototype system, one of the lightest braking systems they have. It’s about 1 kg for the complete front wheel system, all connected to the Rotobox carbon wheels with Dunlop supplied GP Racer tires for a perfect connection to the ground. This bike is really dynamic on the streets.”

Finishing touches were provided by Jeroen from Silver Machine Seats who covered the seat and g the dash with Alcantara, inspired by Hypercar dashboards.

“No real sense to that decision, but hella cool.” 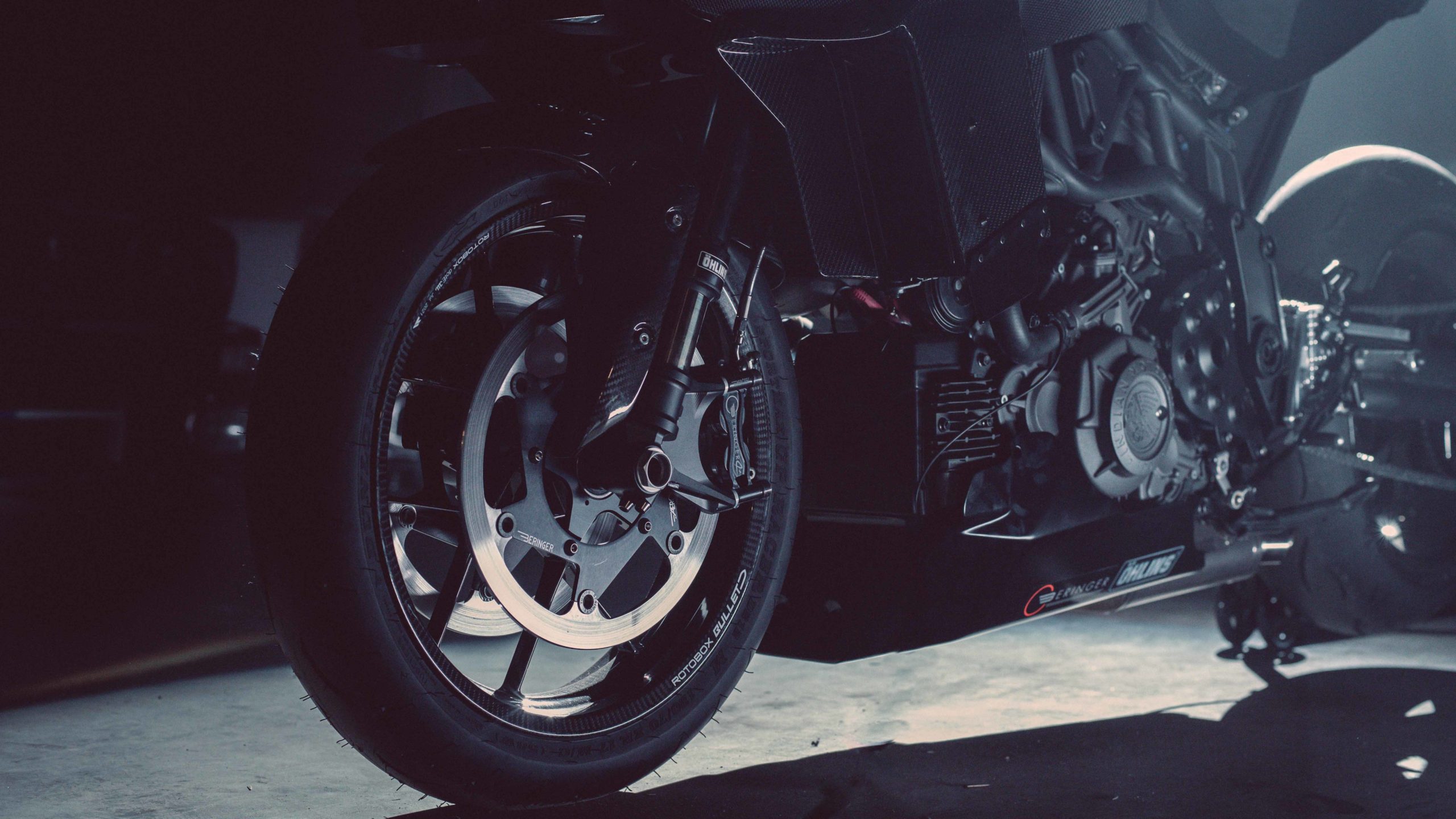 “I would never have achieved such a complicated build alone. So many of my previous partners on Appaloosa stepped up to the plate, as well as a host of others, and I thank them all. I got a lot of pleasure working on this project and I hope that Black Swan gives the owner, and anyone who sees it, the same feeling.”

Good vibes and soul rides on the Victory Octane! Now it’s time to start building the #93Octane like a madman! […]