Some things go better together than by themselves, like peanut butter and chocolate, or beer and pizza, for example. That bit of wisdom applies to Anthony Bastieri’s Softail from Schwartzkopf Exclusive Customs (SEC) in Marina Del Rey, California, which is a pretty unusual meld of ideas in a great package. Taken individually, his reasons for combining these cool parts aren’t all that rare (lots of folks like kickers or Twin Cam motors) but the pieces come together in a unique package that you don’t see at every event. First and foremost, Bastieri wanted the fattest ride possible (hence the 180 front rubber), but he also wanted a very reliable mill (hence the Twin Cam 88) with the classic touch of a kicker.

Bastieri originally went to Exile Cycles for this build, but for various reasons it couldn’t take on the project so he hunted around until he met SEC owner Eric Schwartzkopf, who was more than happy to hook him up. As far as finding a fat front end made for a 180 tire, Bastieri had already solved that on his own. HB Parts in Huntington Beach had made one for him by the time he found SEC.

However, getting the rolling chassis done was easy compared to converting the Twin Cam to kickstart-only. Stock TC starters work off a crank position sensor that has to sense two complete revolutions in order to start the bike; hooking into the motor conventionally would mean having to get two complete cycles out of a kick to turn the motor over. Eric sidestepped that problem by going to Vulcan Products, who provided a conversion kit that extends from the rear cam so that Eric could run a conventional starting system and allow the bike to start on one revolution.

With the kicker issue resolved, the rest of the bike fell into line with comparative ease. Both Eric and Anthony were proud of the end result: the former for rising to a new challenge as a builder and the latter for seeing his fat ride brought to fruition. 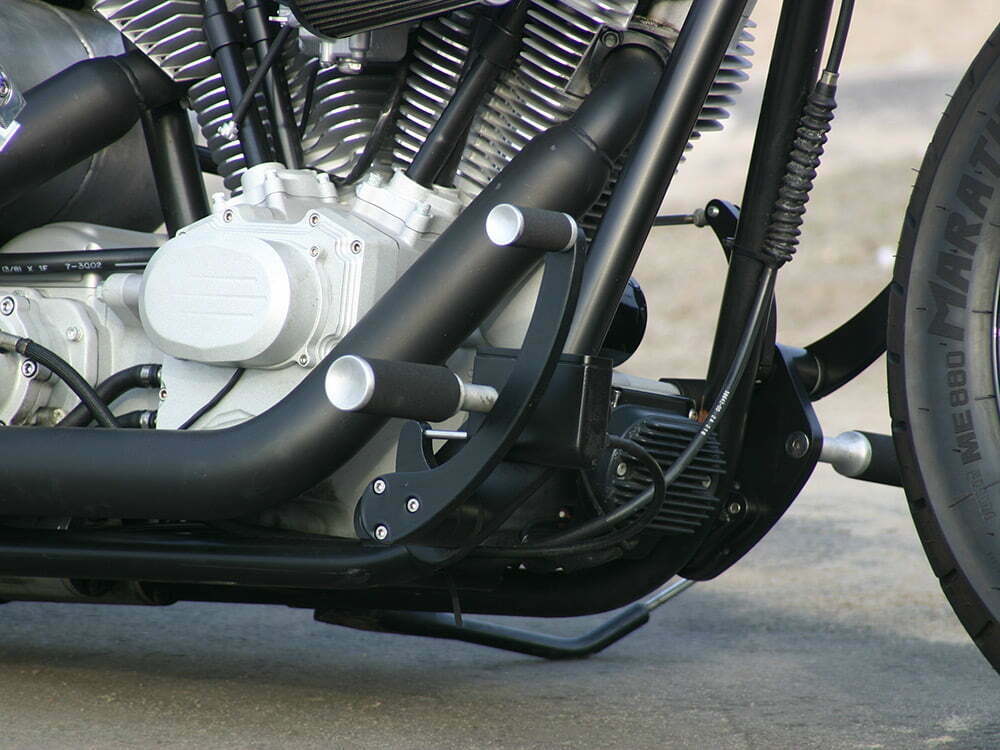 The Mid-USA foot controls were kept clean, simple, and industrial-looking. 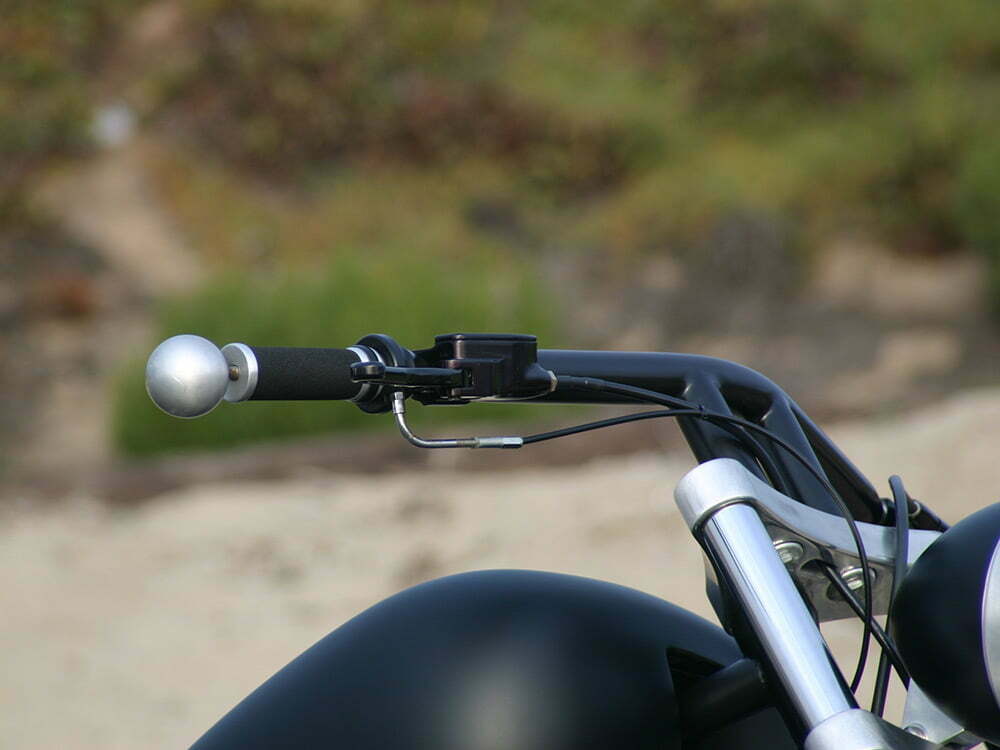 That motif continues with the Performance Machine hand controls up top. Rounded mirrors at the ends don’t break up the bars’ smooth line. 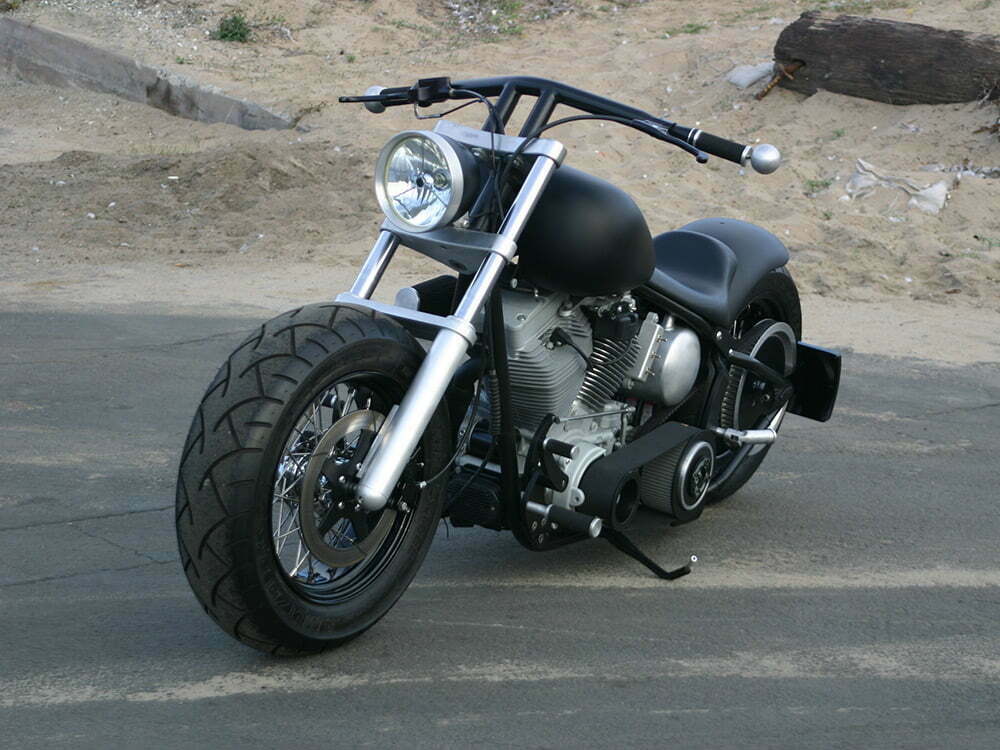 That 180mm front tire just looks right for the rest of this particular bike. 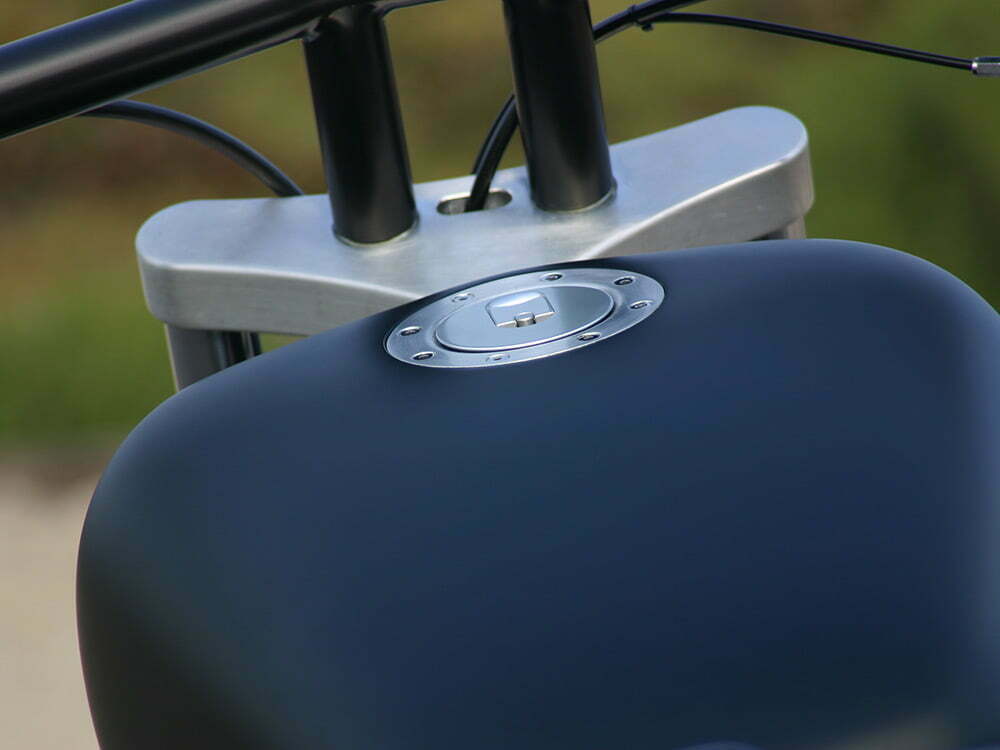 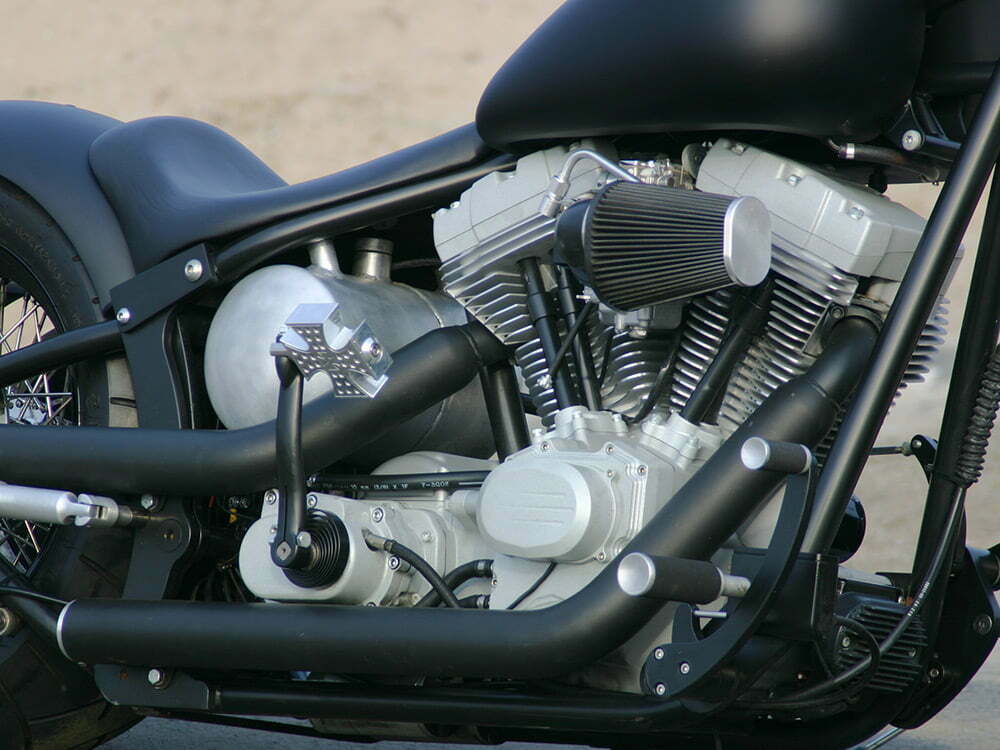 How often do you see a Twin Cam with a kicker on it like this? 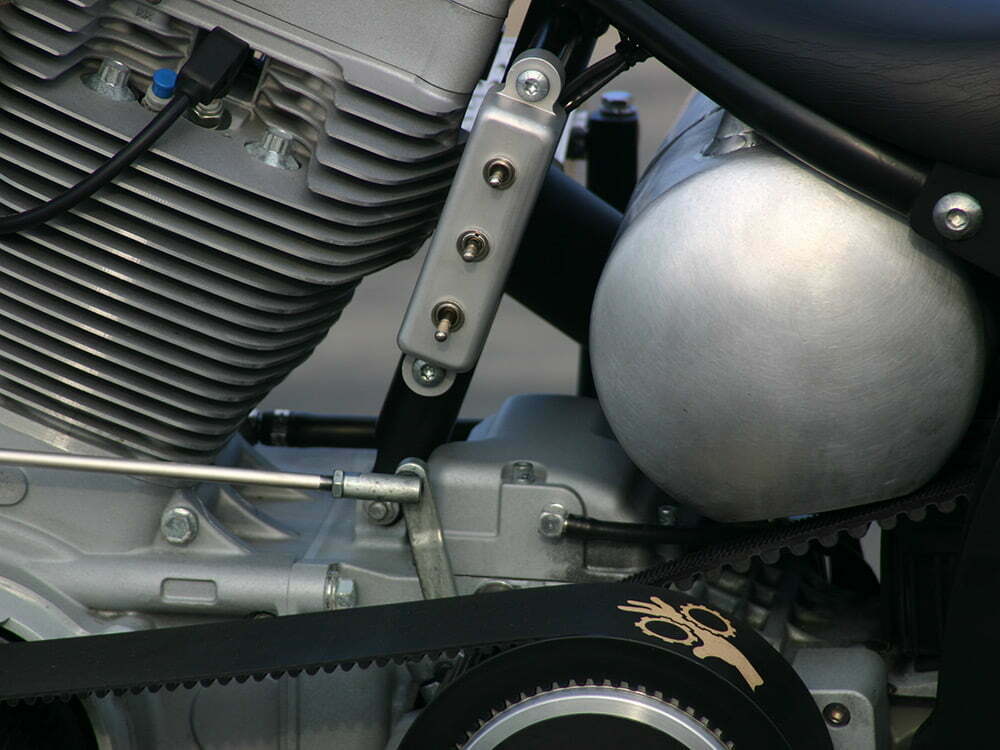 Switches for the air shocks. 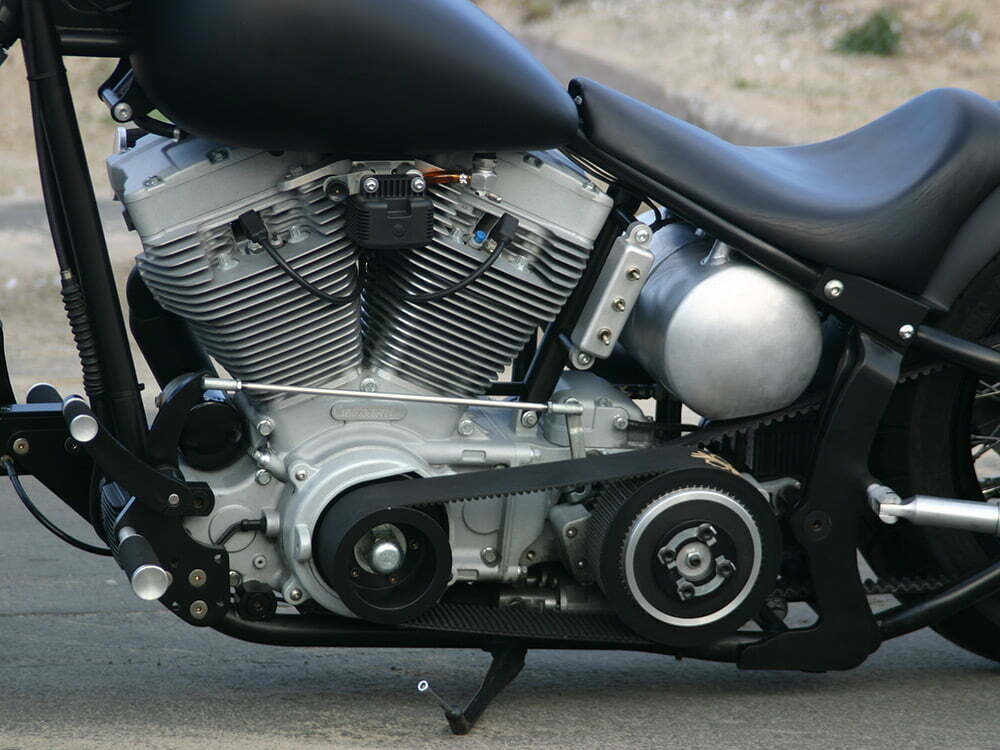 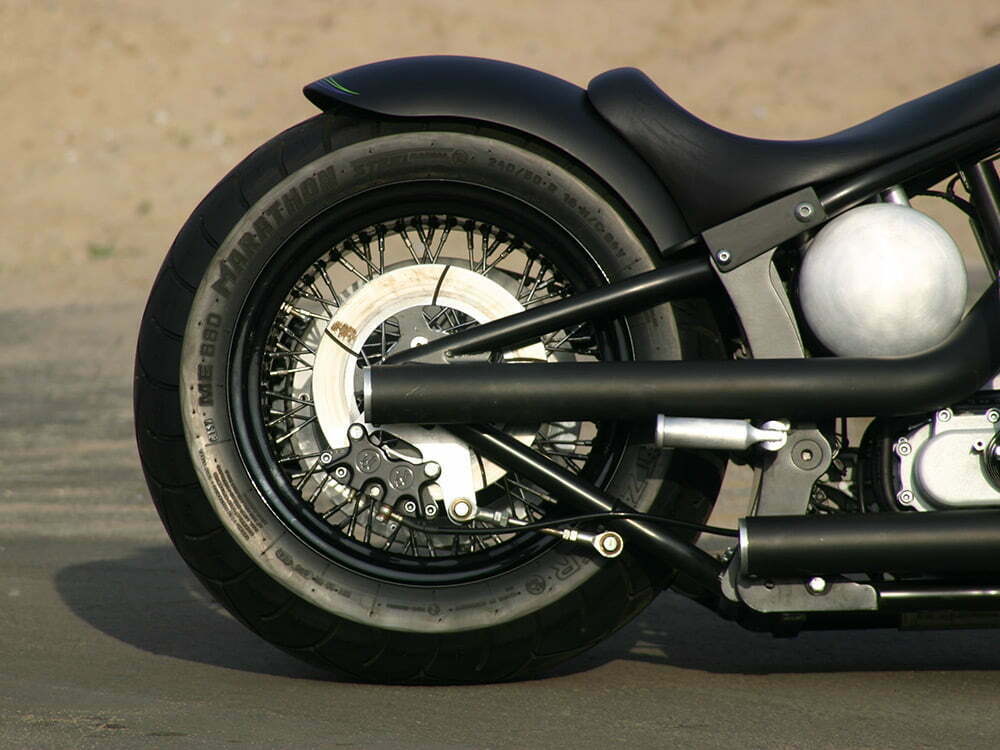 Baby got back: In this case, a 240mm donut with a Performance Machine caliper and GMA rotor for stopping power.

Rick Fairless and Strokers Dallas are proud to announce the hiring of product designer and developer Dylan Hoey. Hoey comes […]

1 The inverted V-shaped cross member between the seat on Tyler’s repop frame was misaligned by over 1/4 inch. 2 […]

6 Ways To Hot Rod Your Harley-Davidson This Holiday Season

’Tis the season for dropping hints. For holiday gifts, that is. After spending the summer in the saddle of your […]

Analog Temperature Gauges for the Touring and Dyna Models