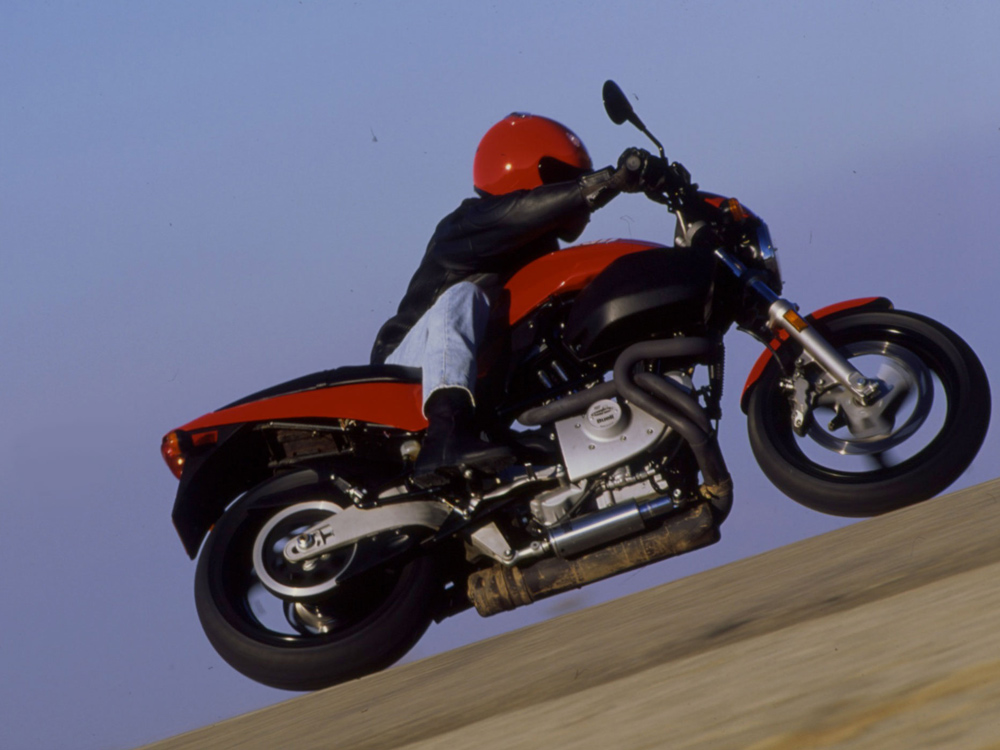 For 1999, the Buell Cyclone M2 received not only improvements, but a complete character transplant.

The engineers at Buell have been at it again. They’ve taken a perfectly good motorcycle, the 1998 Cyclone M2, and tweaked and changed it until the ’99 model isn’t just improved; it has received a complete character transplant. The ’98 Cyclone was a good, competent machine, but the new one beats with the heart of last year’s White Lightning.

And so it should. In 1998, the Cyclone was propelled by an engine that shared cams and heads with recent-model Sportsters. This year, Buell Thunderstorm heads—the big-valve units that helped pump the White Lightning up to 100 horsepower and that Harley’s P&A division now offers as an accessory—sit atop the new Cyclone’s cylinders; the cams remain the relatively short-duration Sportster-spec units. Combine all of those tuning factors with a 10.0:1 compression ratio, and you get a hot-rod tractor, an engine that starts pulling hard just off idle, hits harder yet in the midrange, then happily and willingly winds out to 6000 rpm and beyond. The Cyclone puts out more peak power than the original Lightning, yet thoroughly crushes that machine in the mid­range. And that’s with a stock muffler; almost any aftermarket muffler or Buell’s soon-to-come, second-generation race pipe will boost the midrange yet higher. 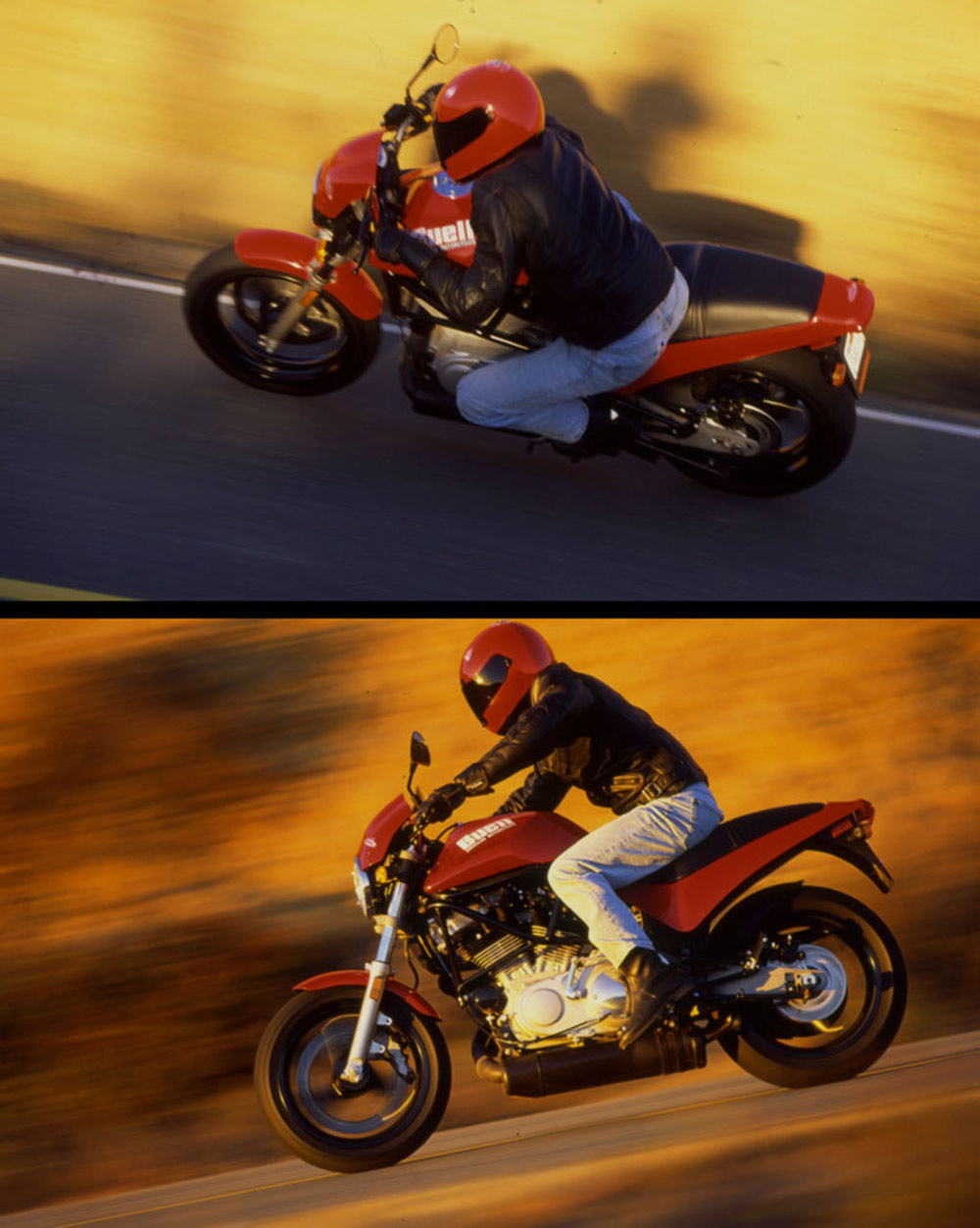 Those busy Beullists didn’t leave the rest of the Cyclone alone, either. The company listens very closely to its customers, both current and potential, and complaints and desires are dealt with quickly. Start with the most obvious. A big, 5.0-gallon gas tank—the manta-ray design originally intended for the S3 and fitted last year to the White Lightning—replaces the tiny, 2.9-gallon tank of the ’98 Cyclone. The right frame tube was recontoured to allow the exhaust pipe to pass under rather than over it, thus helping to alleviate a hot spot near the rider’s thigh. Also new are the seat and tailsection, a solid break away from the early Buell theory that tractor-saddle-shaped seats could substitute for simple area. The Cyclone’s seat now stretches 13 inches across, and it provides better cushioning and more room for both rider and passenger. The ignition key has been moved from an under-tank grope to a more rational location on the dash panel. And suspension rates have been altered to provide a better ride.

This latest Cyclone also has the good fortune to share some of the hardware recently added to the line’s more expensive S3/X1 models. A one-piece, cast-aluminum swing­arm now graces the back of all Buells, as do forged shift levers, brake levers and footpegs.

But while design refinement has come to the Cyclone, the real litmus test is in the riding. Put the barrel-shaped key in the easy-to-access ignition, twist the throttle a few times to let the accelerator pump squirt a bit of fuel into the intake tract, thumb the starter, and the engine lumbers to life. If you don’t pull the under-tank choke lever, you’ll have to keep blipping the throttle (to activate the accelerator pump) for the first few seconds before the idle stabilizes on its own. 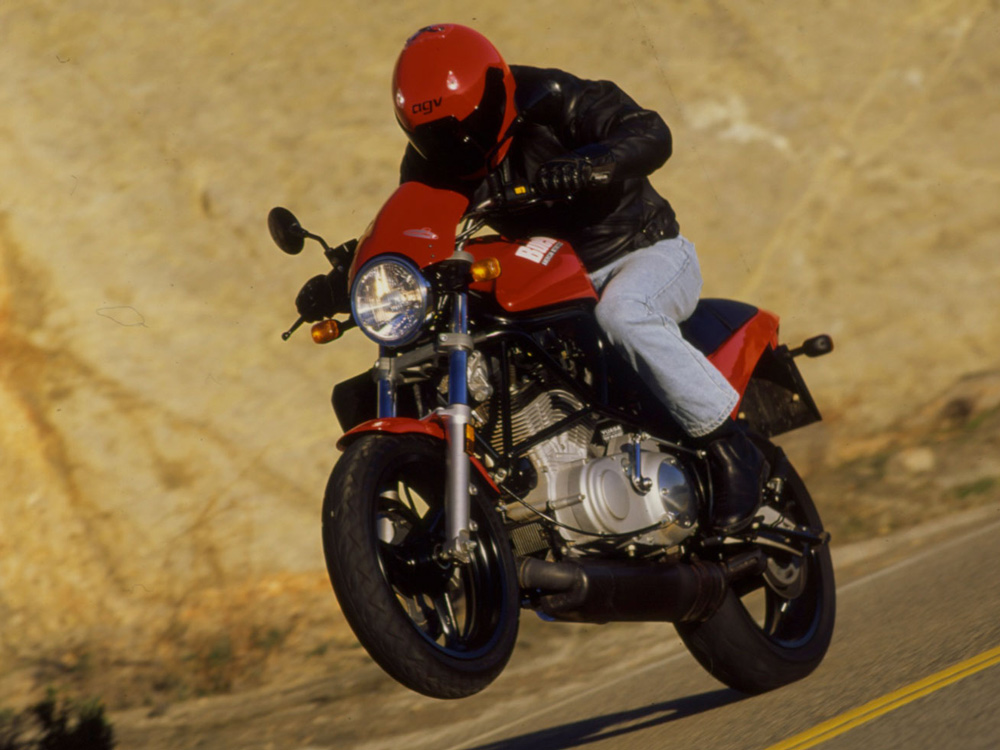 As on all Buells, the engine shudders and jumps about on its rubber mounts at low rpm. But the instant you click the M2 into gear and ride off, the shuddering goes away. And from the rider’s perspective, the rubber-mount system cuts vibration to a trivial level, felt mostly at idle or when lugging in top gear. At anything above 3000 rpm—though a tachometer isn’t standard equipment—the engine smoothes noticeably.

If you whack the throttle wide-open while the engine is still cool, the Cyclone surges forward in first gear with the front wheel lofting off the pavement, rising even higher with a quick shift to second. Irresponsible hooliganism, of course, but fun. Even when the engine is thoroughly warm, its midrange power is so stout that you want to twist the throttle just to feel that solid lunge forward—a lunge that turns into a long-range pull as the revs climb. You’d have to put a pile of money into a Big Twin or Sportster engine to create one that’s as quick as this box-stocker. 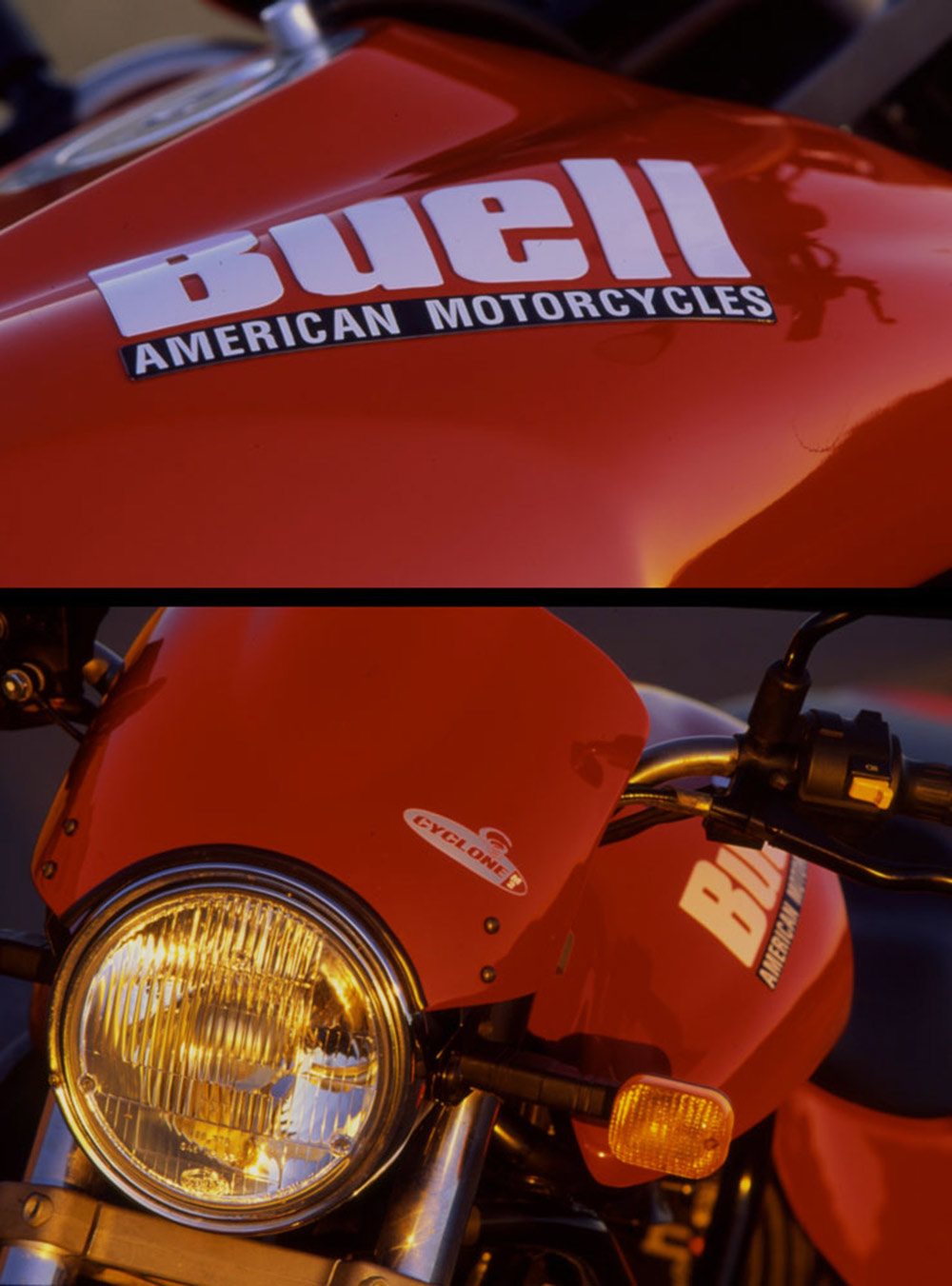 Buell listened closely to its customers complaints and desires and dealt with them quickly.

That big-iron power also comes in a well-thought-out package. The riding position is sporty, but not radically so, with a handlebar that pulls you slightly forward, into a mild lean. The footpegs are aft compared to those on any Harley, but about two inches forward and lower than those of the S1 or X1. Overall, the position is both comfortable and roomy. The new seat cuddles you in a broad, well-padded perch, a first for any Buell. Even the passenger accommodations are roomy.

All of this combines to create a bike that can handle just about anything you can throw at it. In the city, the torquey power, the quick steering, the powerful front brake all encourage an aggressive riding style. But if you’re feeling mellow, you can just wallow lazily in the lower part of the power range. Out on the highway, the smoothness and comfortable riding position encourage you to drain the big tank; and at 52-plus mpg, you have to cover almost 175 miles just to hit Reserve. 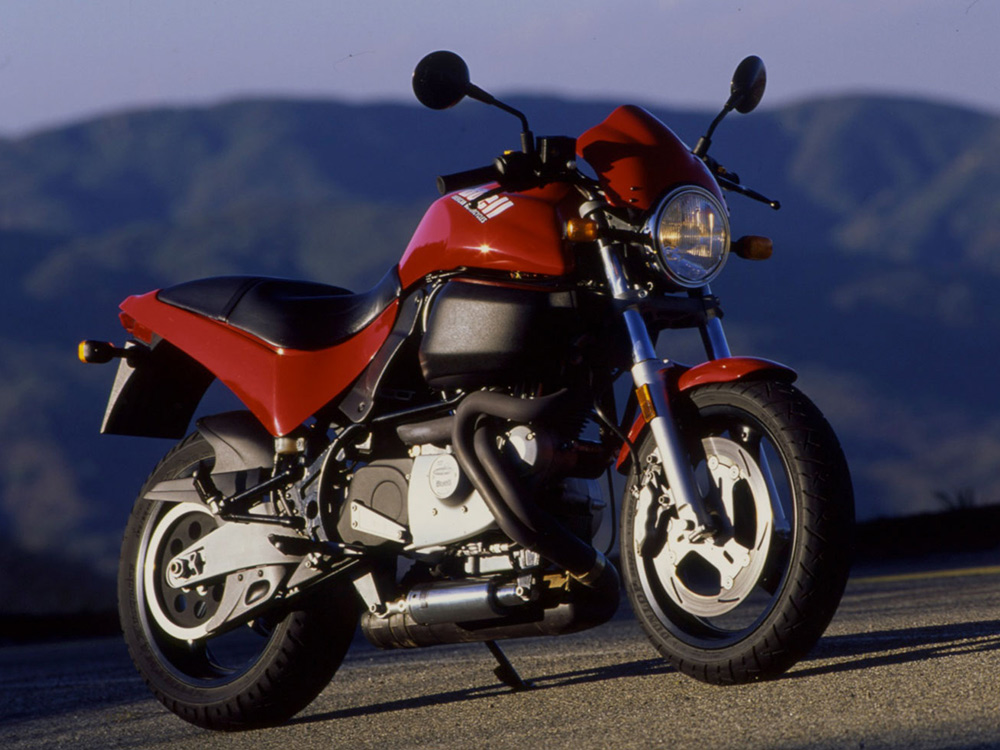 From its racing-red color to its two-passenger comfort, from its user-friendly powerband to its buyer-friendly price, the Cyclone M2 is arguably the best—and certainly the most practical—Buell of all.

Passing at freeway speeds, even two-up, requires nothing more than a quick twist of the throttle. At 75 mph, the Cyclone is sitting in the fat part of its torque curve, and it just gets better—and does it quickly—from there up to 100 mph. But any time a downshift is required, you’ll find that the light-flywheeled Buells are the best-shifting machines with a Milwaukee-built engine.

On twisty backroads, the Cyclone boogies, though not quite on par with the Lightning. The softer springs fitted to this year’s M2 let the footpegs touch down before the tires are squirming at their limits, and they also allow the fork to bottom under hard braking. For ultimate cornering, other Buells are better. Which i’s not to say that the M2 won’t hustle down a backroad quickly; a comparable rider on, say, a 1200 Sportster Sport would struggle to keep up. It’s just that Buell engineers have decided that for the ’99 Cyclone, a better ride is worth more than ultimate cornering. Given the bike’s high overall performance limits, we won’t quibble with their decision.

Notice: Trying to access array offset on value of type null in C:laragonwwwhotbike-importblocksimage.php on line 3

Notice: Trying to access array offset on value of type null in C:laragonwwwhotbike-importblocksimage.php on line 3


A one-piece, cast-aluminum swingarm now graces the back of all Buells, as do forged shift levers, brake levers, and footpegs.

In the final accounting, however, the most amazing thing about the new Cyclone M2 is its price. When the first Cyclone was introduced in 1997, it listed for $9,299. A price cut for ’98 dropped the MSRP to $8,399—but for much less machine than the original. This new M2 is, by some measures, the best, most versatile bike in the Buell lineup, yet its list price is a mere $8,599.

It’ll be a long time before you find a better price/performance package at your lo­cal Harley/Buell dealer.

“A Chain Tensioner Incorporated in the under-side of the frame helps keep the final drive chain tight. Vents built into […]