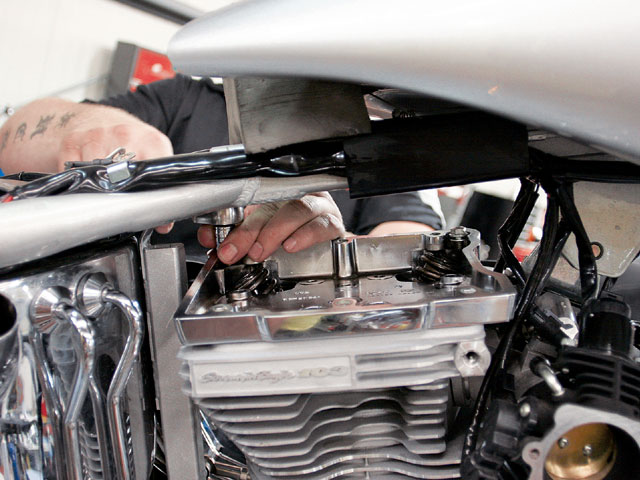 After the exhaust, air cleaner, and cam cover were removed, then the rocker covers, breathers, rocker-arm support plates… 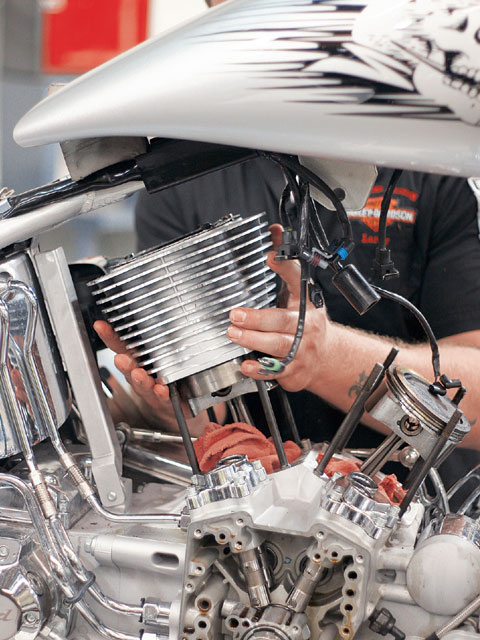 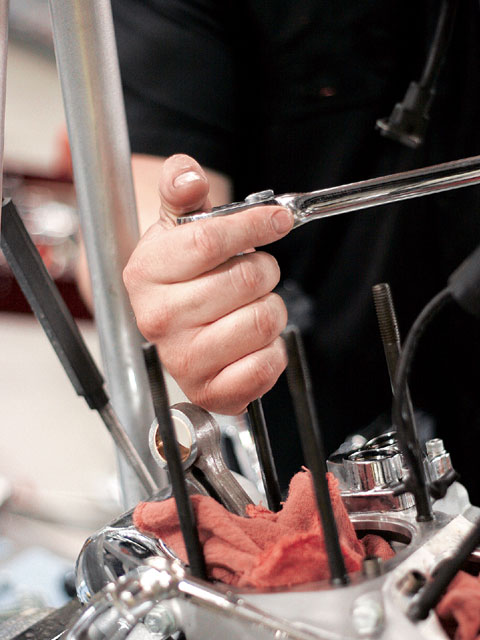 …and pistons were removed. The stock cylinder studs were also removed, before… 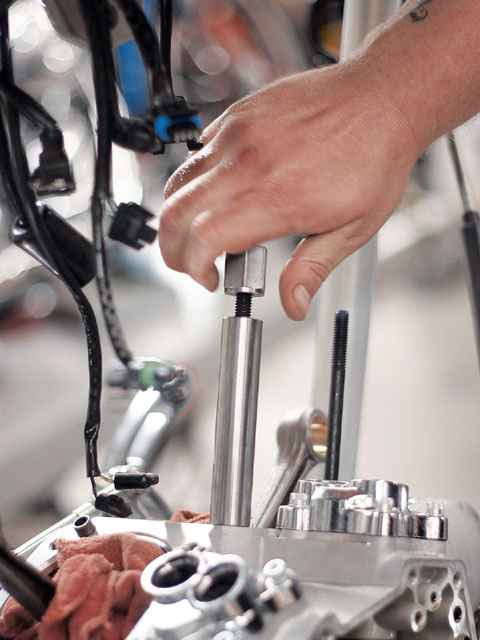 …installing a new set of Screamin’ Eagle High Tensile cylinder studs. These are stronger than the stock studs and are designed to withstand increased engine power. 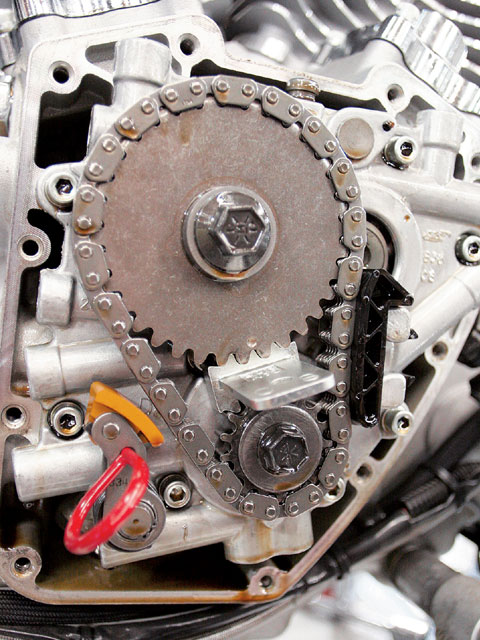 After unloading the primary cam chain and holding the chain tensioner with a retention pin (red loop), a crankshaft/camshaft sprocket locking tool was placed between the sprockets to prevent the sprockets from rotating as the fasteners were loosened. 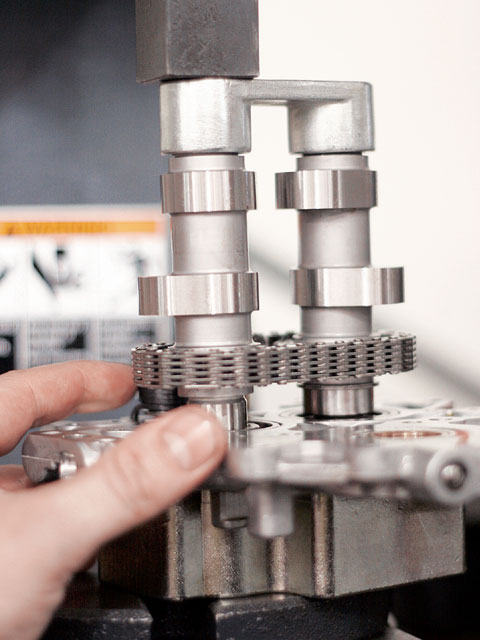 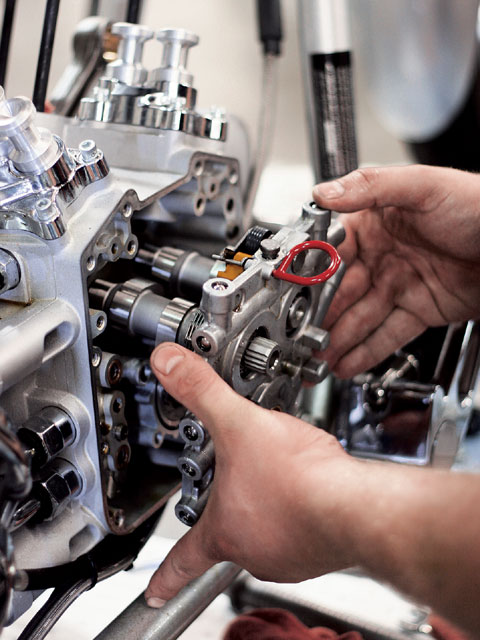 …the cam support plate and cams were reinstalled back into the cam chest and the cam cover replaced with a fresh gasket. 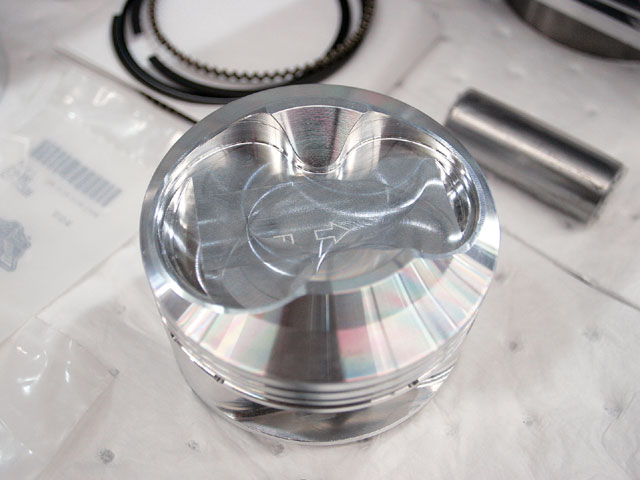 Because of the shape, these pistons only work with the HTCC cylinder heads to obtain multiple squish bands, turbulence, and static compression ratio.

Here’s another look at the unique piston shape as Larry installed the piston-pin lock ring.

Using a piston ring compressor, the cylinder, with the cylinder base 0-ring installed, was slid over the pistons and rings.

After both cylinders were in place, the heads were fitted with compression releases that will aid in starting the big, high-compression motor.

The ported HTCC heads are predrilled for the compression releases. The manual releases were inserted next to the spark-plug hole and tightened…

…before installing the heads and high-performance multi-layered head gaskets onto the cylinders and carefully torqued to the factory manual specifications.

To add extra strength to the valvetrain, we used forged rocker supports and roller rocker arms. The rocker arms require the stock rocker housings (shown) to be clearanced to prevent valves and rockers from contacting the rocker housing.

Likewise, the rocker covers had to be machined to ensure carefree operation.

Once the prep work was done, the roller rocker arms were attached to the rocker support with the rocker-arm shafts, before…

…securing the assembly onto the cylinder head.

To facilitate future modifications or maintenance, quick-install pushrods were placed inside the collapsible pushrod covers and adjusted.

Once the mechanical work was out of the way, the EFI throttle body was bolted up to the new HTCC intake manifold prior to installing the air-cleaner backing plate and…

…attaching the gas line into the fuel tank. An H-D Race Tuner was used to calibrate the ECM to the engine modifications and was plugged into the wiring harness under the seat, along with a new Kerker two-into-one exhaust system.

Our test bike was the TMCC Blackhawk 240, a solid, fast Softail. We wanted more power (more, more, more) but also desired operational reliability, since the silver steed never rests for very long, whether it’s hauling the staff around town or “banzai”-ing to Sturgis. We explained our need for speed to the guys at TMCC. They looked no further than the Screamin’ Eagle catalog for the necessary performance goodies. Since this was a regularly ridden street bike, torque rather than peak horsepower was the goal of the mods. A set of high-torque-combustion-chamber (HTCC) heads with matching pistons would be the basis for the extra power, along with new cams and a freer-flowing EFI manifold. Of course, while boosting the output of any motor, it’s a good idea to strengthen the supporting cast of parts, such as the cylinder studs, rocker supports, gaskets, and so on. Roller rocker arms were chosen to reduce wear on the valvetrain and for peace of mind.

We were looking to make roughly 110 hp and a little less than that in torque, but in an extremely rider-friendly package with a linear power curve, thanks in part to the flawless H-D EFI and the chosen cams. This motor will cruise all day at 3,500-4,000 rpm and has enough power to pass anything on the road, usually without even downshifting.

Follow along as we take you through the basics of the parts swap.

Subtlety apparently isn’t Dean Wilson’s strong suit. It’s a fact that becomes all too apparent as Dean, the owner of […]