The S&S Smokeout at the Broken Spoke Campground! 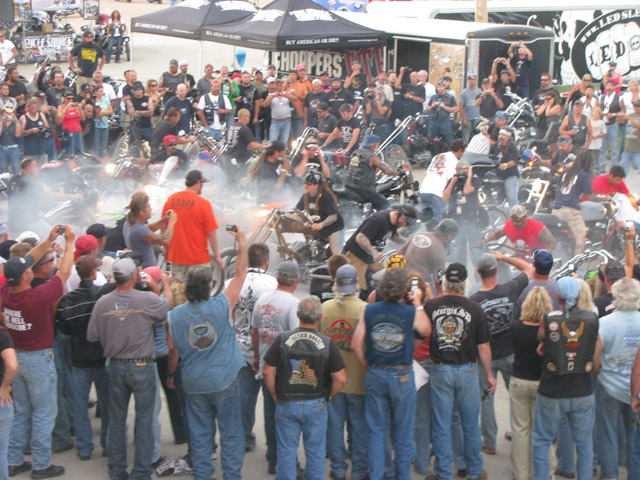 The same rubber chunking, heart pounding, hair raising event that first graced the County Line during the 2009 Sturgis Rally is kicking off round two in 2010. To top even last year’s amazing event, the Broken Spoke and S&S; Cycles will raffle off an S&S; motor! On Thursday, August 12th at 7:30pm, 500 lucky individuals will line up their motorcycles to become part of history and create a one-off burnout that could probably be seen from the far reaches of space. Of course, safety is the number one priority and The Broken Spoke will bring in concrete jersey barriers for contestants to pull up to. Each and every rider will receive a number and a corresponding certificate for their participation in this one of a kind experience. They will also receive a raffle ticket for their chance to take home that shiny new S&S; motor. This is the only way to get your shot at the motorcycle history books and a killer prize from America’s premier horsepower provider, so don’t miss out!

Be at the Broken Spoke Campground on Thursday, August 12th between Noon and 3:00 p.m. to sign up. If you are camping at the Broken Spoke, you can pre-register by emailing: [email protected] to reserve your number. Please include your Broken Spoke Campground confirmation number in your email. All contestants will be required to sign a waiver and if you are not present by 3:00 p.m., your number will be handed off to someone else.

Yorba Linda, CA – Cobra announces the next big step in electronic controls for motorcycles – and it’s as close […]