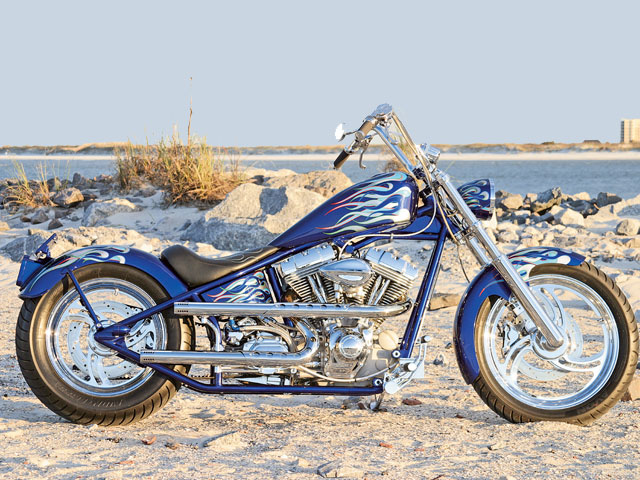 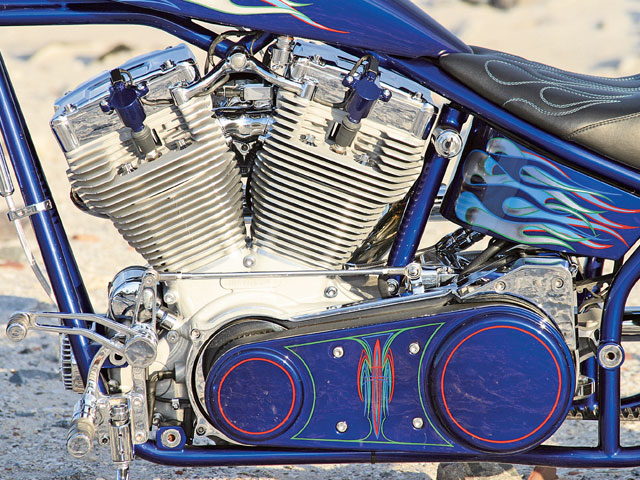 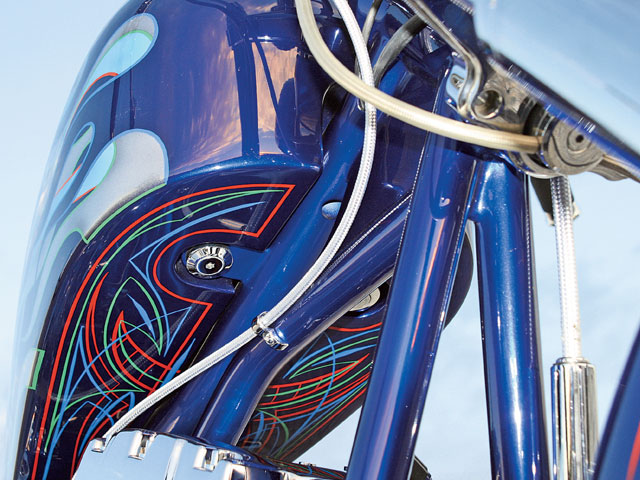 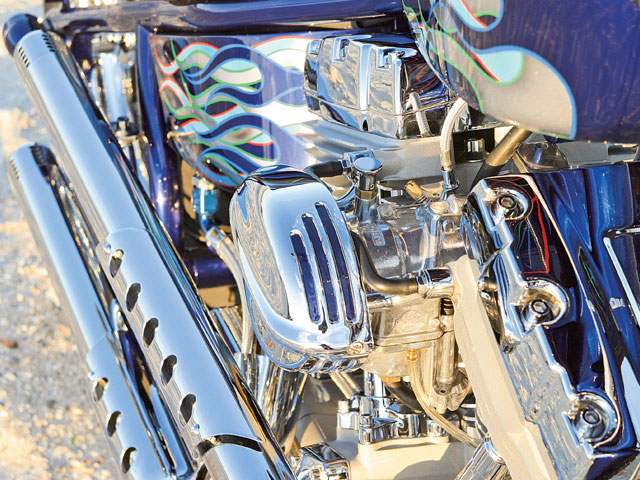 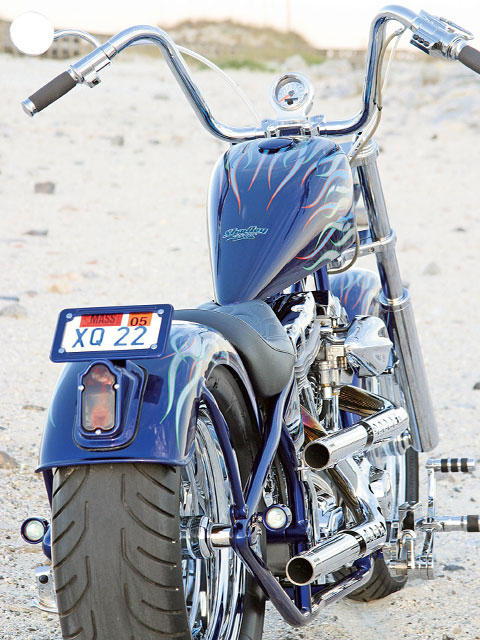 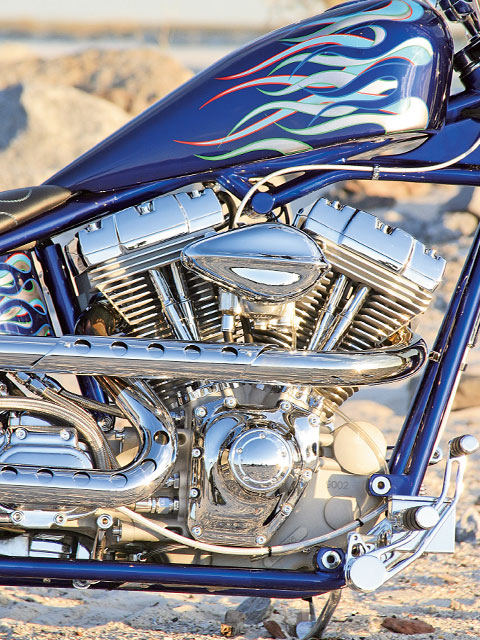 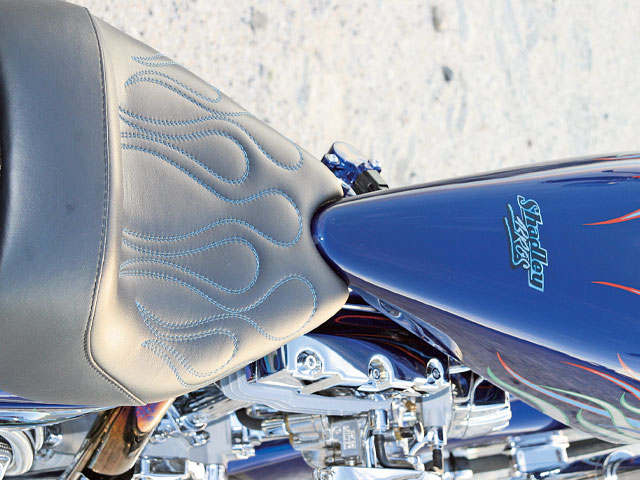 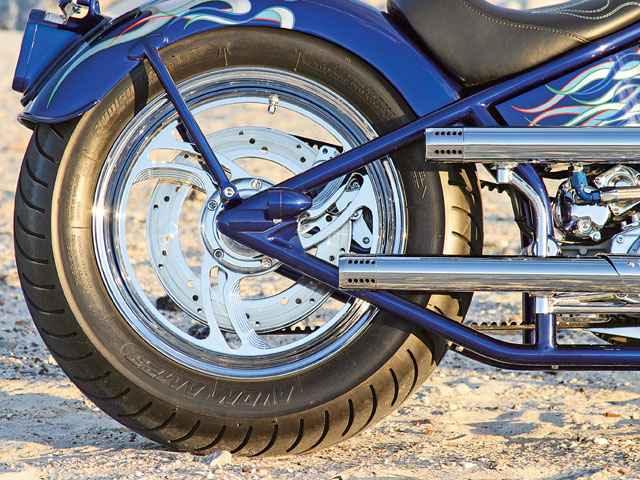 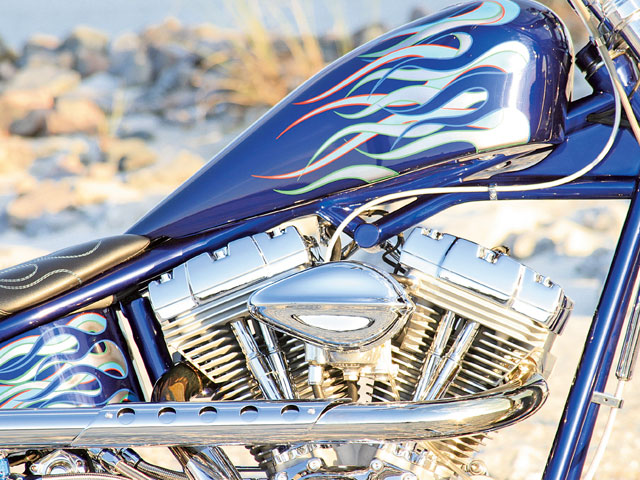 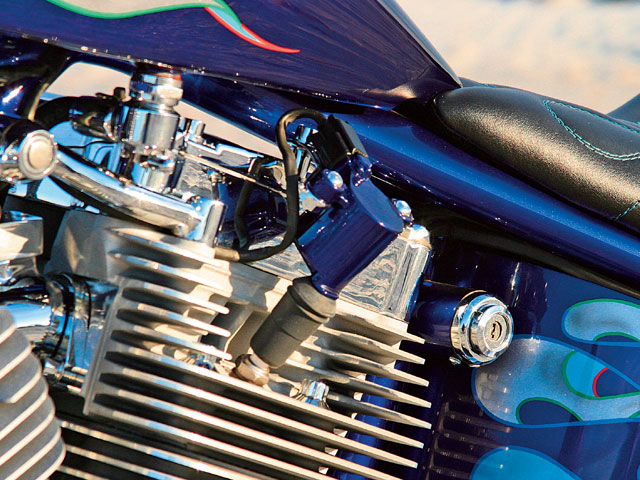 At first glance, Mark Shadley, owner of Shadley Brothers in Whitman, MA, bears more of a resemblance to your neighbor or long-time buddy rather than the world-class bike builder he actually is. Almost every aspect of bike building, from metalwork and fabrication to paint, is performed in-house. His unassuming demeanor and lack of attitude reminds you of the consummate family man, which, in fact, he is. To cut to the chase, this Harley-Davidson-powered blue rigid was a combined father-son project-a chance to learn and bond.

On a recent family trip to Sturgis to work, relax, and ride, Mark set up his teenage son Dean with a stock H-D Dyna to tool around on in the Black Hills. The FXD was a nice ride, but it lacked the originality and style that would set the bike apart in the crowd. Upon returning home to the Northeast for the hibernation season, they both decided a bike project was in order. While Dean was working in the shop helping out his dad, he had definite ideas about what kind of bike he wanted to ride. It was to be a rigid for mean looks and attitude, but it would also sport a smooth and reliable balanced H-D motor to get it going down the road. The main idea was to build the scoot from available parts in the shop while it was being constructed during the business’s off-hours-usually meaning o’dark-thirty on weeknights and Sundays.

Their first order of business was picking up a frame from the guys at Rolling Thunder. A clean, non-suspension steel frame with a conservative 32 degrees of rake that also had motor mounts for a Twin-Cam 88B motor was chosen. The stock-length twin-downtube frame featured a two-angle, no-stretch backbone that would accept the counter-balanced H-D mill. Dean did all of the prep work and molding on the frame before giving it a shot of House of Kolor paint. The frame was covered in a deep, vivid-blue hue that would match the sheetmetal.

Rolling the chassis around the shop was accomplished by bolting on a set of Dave Perewitz triple-trees along with stock-length legs with smooth, chromed sliders. Perewitz wheels holding Avon rubber bolted right in, along with the clean, drive-side rear pulley/rotor combo. With risers and handlebars added, the project was literally moving along in the shop. Front fender duties were outsourced to Russ Wernimont for a relatively full-coverage, tire-hugging piece. Dean made the strutless rear fender, along with the welded-on tubular steel supports attached to either side of the rear section of the frame. A stretched Sportster gas tank and a wraparound Rolling Thunder oil bag rounded out the sheetmetal. All of the skins were given a cobalt treatment identical to the color on the frame. A nice touch was adding paint, among other smaller parts, to the outer open-belt primary cover, headlight bucket, license mount, and gas cap before John Harnett laid down some multicolor flames and pinstriping. Something not seen very often was the attention paid to the bottom of the gas tank, with painted pinstriping complementing the flush mounts that attach the tank to the frame. Sitting the Sportster tank high on the backbone would help show off the motor they were going to get.

Mark called the Motor Company in Milwaukee to order a brand-new counter-balanced 88-inch motor and five-speed tranny. This is the same motor that finds its way into all post-EVO H-D factory-stock Softails. The main difference between this engine and the first-generation Twin-Cam motors (designated “A”) is the presence of a dual counter-balancer system that minimizes vibrations transmitted through the solid-mount (i.e., not rubber-mounted) chassis. Chain-driven off the crankshaft, the counter-balancers are situated in the left engine case fore and aft of the flywheels. Upon arriving at Shadley Bros., the powerplant was immediately torn down in order to breathe more life into it. Since the rigid was going to be light, torque was what they were after. Instead of boring out the cylinders, the heads were massaged for better breathing and a more complete burn. A valve job was combined with porting to keep the 10:1-compression Wiseco pistons thumping along with no pinging. New Manley valves were actuated through Rivera pushrods riding on JIMS lifters and Woods gear-drive cams. Intake air and gas duties were left to the big S&S; Super G, which is obscured behind a retro air-cleaner cover. Paul Yaffe high-low shotgun pipes and heat shields get rid of the exhaust. Although an off-the-shelf Crane ignition module was used, the Shadleys made their own coils. Attached atop each spark plug are individual coils for each cylinder-painted blue, of course.

Since this is a stripped-down, subtle machine, the DOT-mandated items such as stoplight, blinkers, and a mirror were kept stylish but small. On the rear, the color-matched mini-bullet blinkers were mounted down low, just ahead of the axle, while the front indicators sit stealthily below the bottom triple-tree. A tombstone lens cover, serving running- and braking-light tasks, was fitted into the rear fender below the license mount. Mini-ape handlebars were finished off with PM hand controls, with internally wired pushbutton switches controlling electrical functions, while a lone gauge and mirror sit atop the bars. A small, round ignition switch was blended into the left side of the frame’s seatpost.

After three months of working through the harsh Massachusetts winter, Mark and Dean emerged from the shop with the completed bike. After some break-in miles, the rigid was ready to enter and win a few local shows. But that was just the prelude to Dean and Mark’s return to the Black Hills, where the inspiration for the Blue Rigid was born. With the mountains and open road ahead, Dean hit the highway on his new custom bike. Dean put more than a thousand miles on the bike while he was in Sturgis. Then came Daytona Beach. And after that? Who knows what’s in store for the youngest Shadley bike builder?

Dixxon Flannel Company is well known for its quality line of flannels and other soft goods. Those folks know good […]

The first 2016 Harley-Davidson models we were able to hop aboard during the press launch in Portland, Oregon were the […]