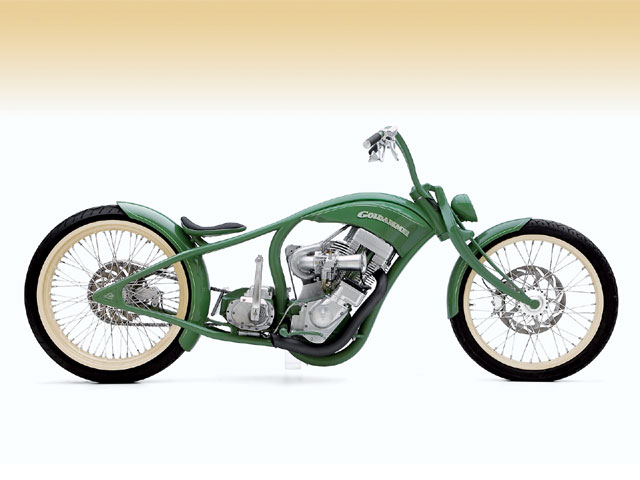 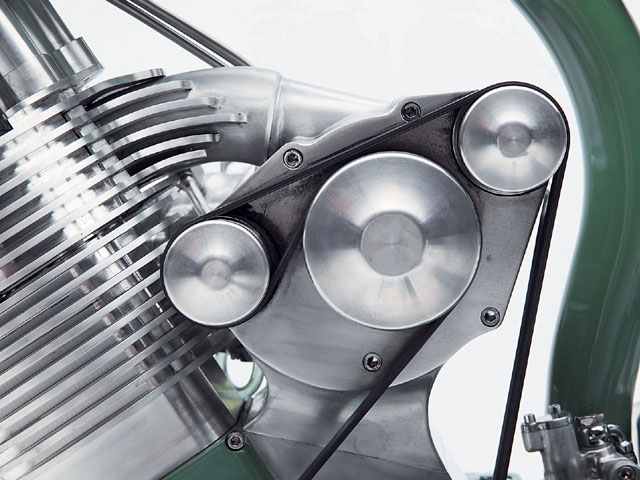 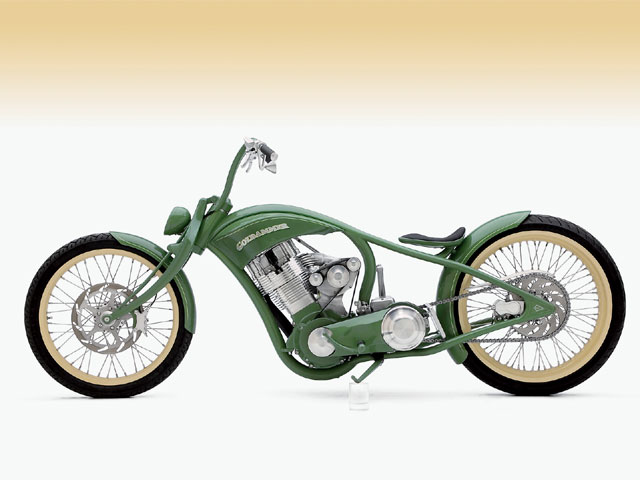 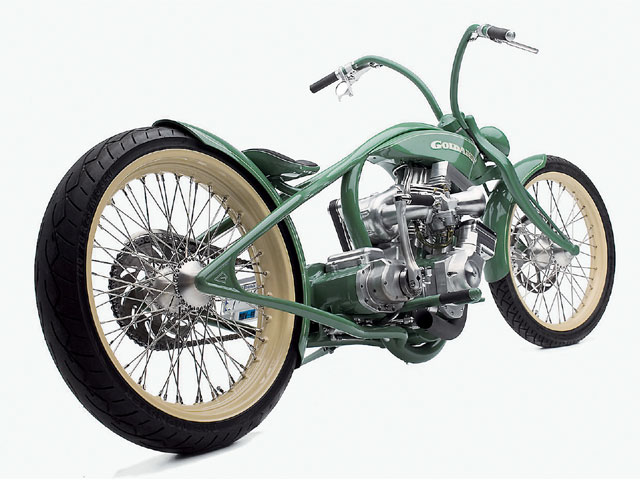 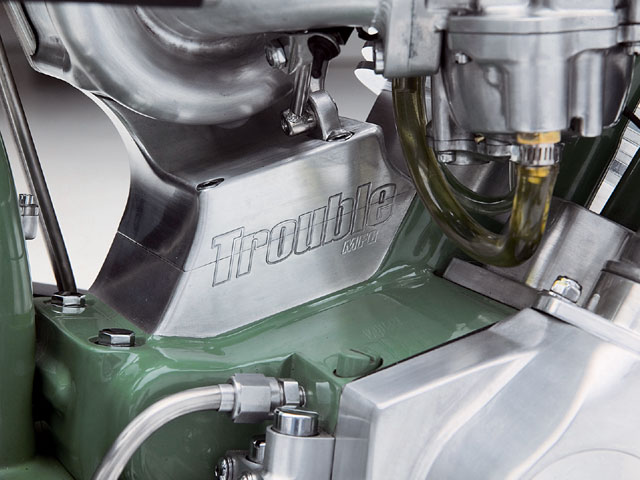 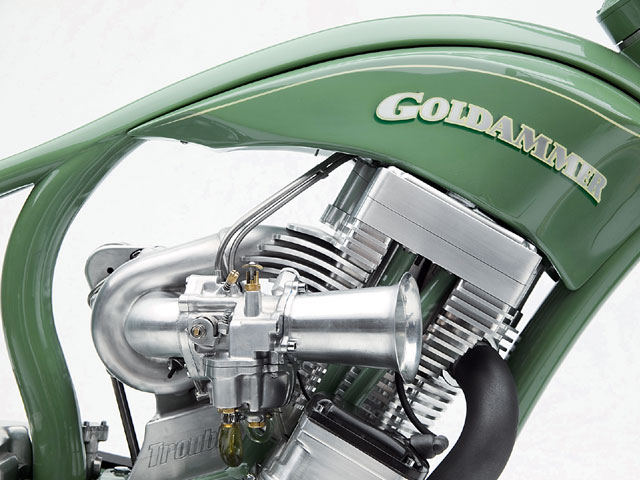 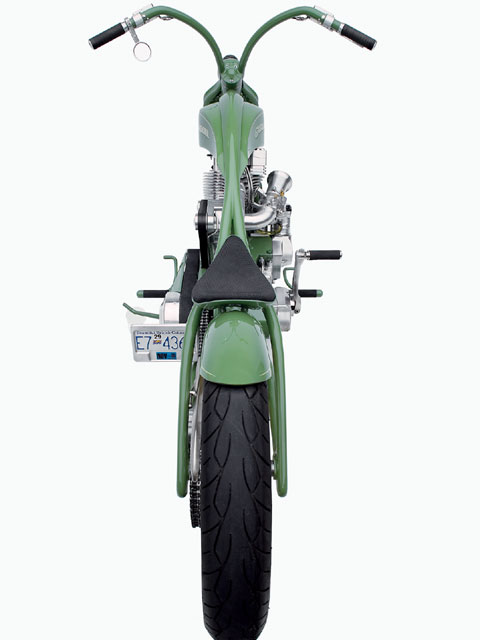 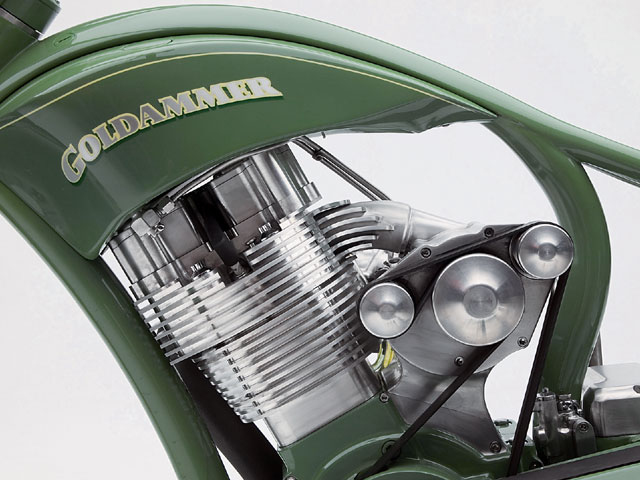 Competition machines often provide some of the more exciting inspiration for both custom and production street bikes. From road racer to dirt tracker and drag racer, these bikes and more have seen their fair share of license-plated replicas. Some appear to be twins separated only by the variety of tarmac they ride upon, while others are a mere suggestion of the go-fast machines that inspired them. All owe their lineage to the track and the spectacle that is racing. Much of the earliest motorcycle racing was done on board tracks and crude dirt ovals, and it is this heady era of racing that lured Roger Goldammer into creating this single-cylinder bike, dubbed “Trouble.”

Set your way-back machine to the mid-’20s and the heyday of motorcycle racing. Bike and rider were pared down to the absolute minimum, forsaking such trivial features as brakes, transmissions, and helmets. The popularity of the single-cylinder 350cc class was growing, and Harley had not made a one-lunger for nearly a decade. The obvious answer was to plate off the rear cylinder and head to the track. By 1926, a production single had emerged from The Factory, and the golden days of the illustrious Peashooter lay ahead. These markedly potent machines soon came to dominate the small-bore class. Made up of little more than wheels, motor, and a spindly chassis, they owned the tracks for a solid decade. Racing legend Joe Petrali won every national dirt-track race aboard a Peashooter in 1935-an accomplishment that remains unequaled to this day.

Flash forward 70-odd years to the modest shop of the talented Roger Goldammer. Roger is not a stranger to early-era racing-his way-back machine had earlier provided him inspiration for a narrow 23-inch-wheeled machine he dubbed “BTR#3” (for board-track racer). His penchant for insane detail and the groundbreaking look of the BTR#3 promptly brought him to the forefront of custom bike building-and a World Championship to prove he was doing it well. The allure of a simple chassis and tall wheels remained, and a bike he would christen Trouble soon inhabited his workbench.

To achieve the period minimalist look he desired, the bike soon became an exercise in veiled function. Although noticeably unadorned, the frame is in fact home to 11 stainless-steel lines that house the electrical, brake, and oil systems. The rear of the chassis is also host to an oil reservoir for the blower, while the front half holds the motor’s supply of lubricant. All this is done without the slightest hint of the complexity that lies within. Modeled after the rigid forks of the era, the frontend is also deceivingly simple-looking.

Although it offers few visual clues, movement of the girder-type frontend actually triggers a short rocker at the top (where the upper triple clamp would normally be), which then pushes on a hand-built shock and spring hidden in the neck of the frame. A network of covert bearings keeps the suspension action smooth and efficient. The detail and engineering involved in making this system work while still cloaking any sort of moving parts likely involved more energy than it takes most builders to complete an entire bike. Goldammer puts total construction time somewhere in the 1,600-hour range.

The motor, much like the chassis, appears austere yet hides untold details. Roger explained, “The V-Twin is a lot like a confused pair of singles anyway, and eliminating one is less of a problem than you might expect.” Using an Evo-style case and crank from Merch as a foundation, Roger added a lone cylinder and head from Engenuity Motors. The ultra-tall cylinder allowed for a 4.25-inch bore and 4.4-inch stroke, for a total of 965cc. That combination alone is almost certainly enough power to motivate this lightweight machine, but it’s not enough for Roger.

The now-available real estate behind the front slug was soon allocated to a Rotrex supercharger sourced from Denmark. This unique little blower is shaped much like a turbocharger and utilizes a very similar-style impeller to push the fuel/air mixture into the motor. Motivation is via a belt drive off the crank with a 2:1 ratio, and an internal 10:1 planetary gearset within the blower results in an impeller running up to 120,000 rpm in the opposite direction of the motor. The compact supercharger feeds into the motor through a hand-fabricated manifold that appears to be part of the cylinder as the fins extend several inches onto it. As with virtually every other part on this bike, they are the result of Goldammer’s obsession with detail…and obvious patience.

A Morris magneto was custom-built with a single-output coil and combined with the machined-aluminum kick starter to allow for a battery-free operation, yet Roger still hid a small battery to operate the lights and horn (yep, Trouble has a horn) when the rpms get low. Linking the motor to the trans is a Rivera narrow-belt primary, and the transmission is an oddly traditional (for Roger) five-speed, with back-cut gears the only mod applied. The exhaust is naturally handmade, and virtually all of the exposed metal was treated to an anti-bling brushed finish.

Trouble’s rolling stock is an unusual combination of a 21×2.125 wheel with Metzeler rubber up front and a big 23×4.75 with a Vee Rubber tire in the back. Roger tells us the combination maintains the tall-wheel look of the period without sacrificing handling, as a taller front wheel can create a heavy-steering bike. “I wanted to incorporate the nicest features of the bikes of the era and then add my own twist to the package,” explained Goldammer. A self-taught builder, he’s also a devoted rider, and the bike absolutely had to function at every level. A hand-cut glass headlight and hidden taillight and blinkers, as well as an actual mirror, keep things more or less legal.

Roger describes it as very ridable, producing plenty of low-end torque in a quick-handling chassis, and says his rides are limited only by the small fuel tank. Naturally, we had to ask about the name and probably weren’t exactly shocked when he explained, “Any time you add a blower, you’re going to have trouble.” We had to concur. So what’s next for the talented Canadian? Rumor has it the Goldammer way-back machine has a soft spot for early-era racing, and we wouldn’t be surprised if he came up with another sweet single.

2003 Harley Softail from the Archives