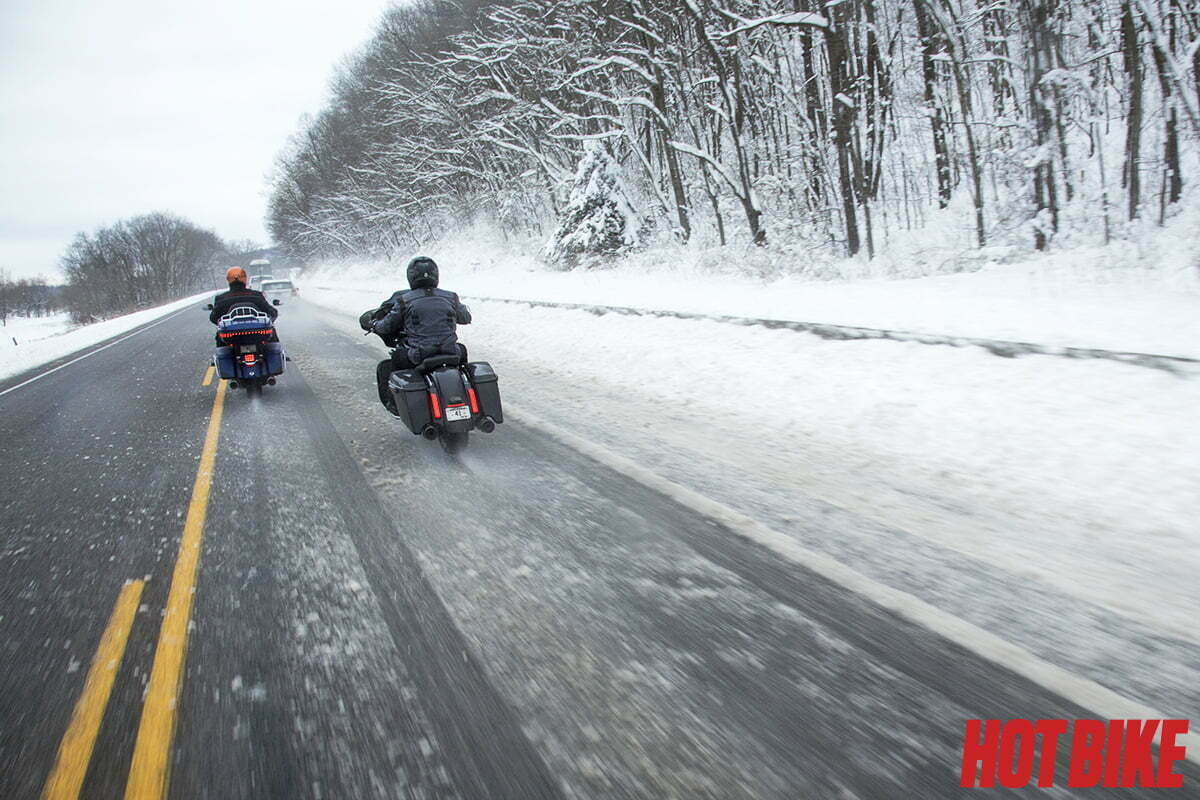 Slogging through the Wisconsin slush and snow on the Brick Ride 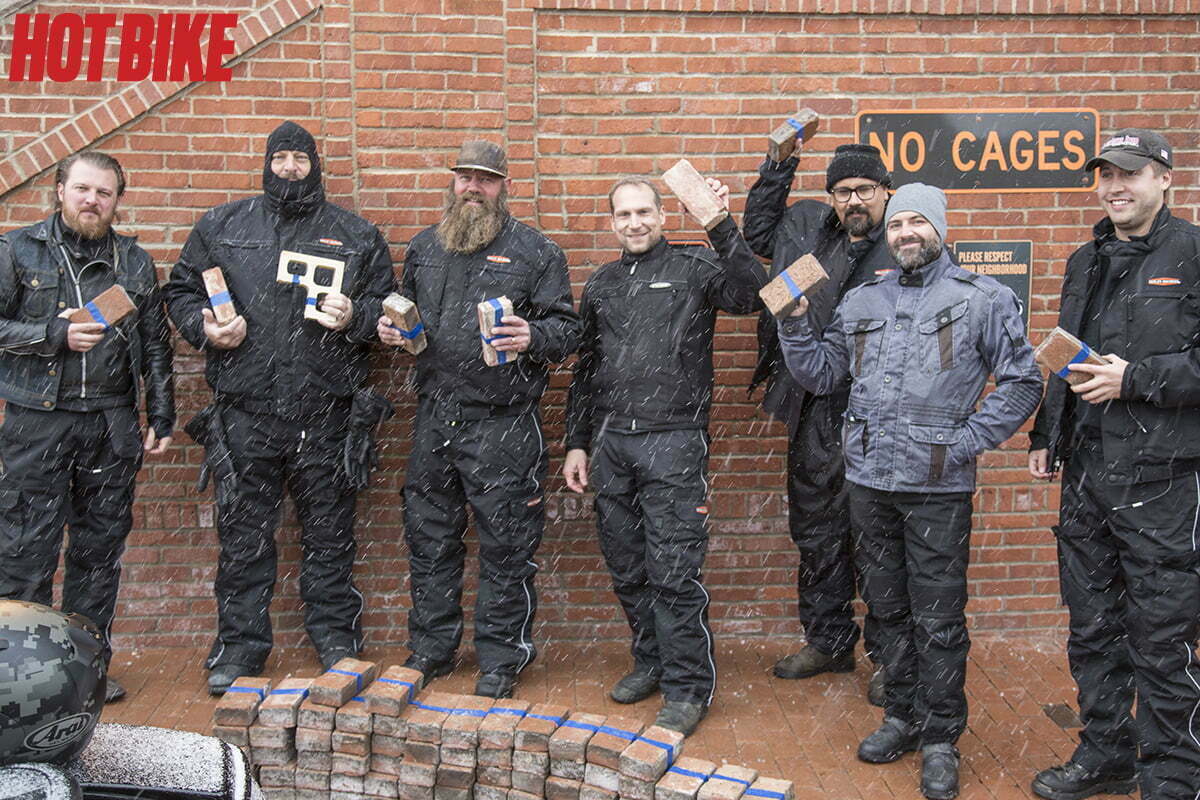 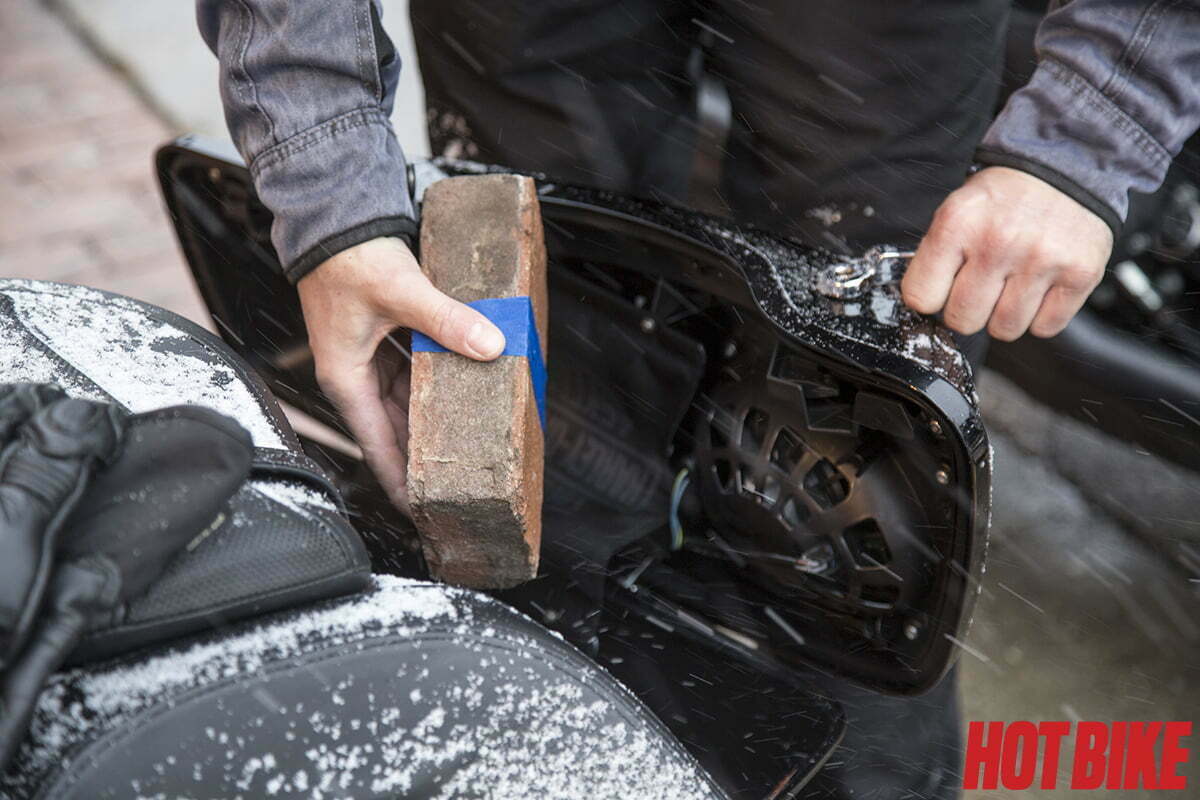 One of the bricks from the historical Harley-Davidson headquarters being loaded for the journey. 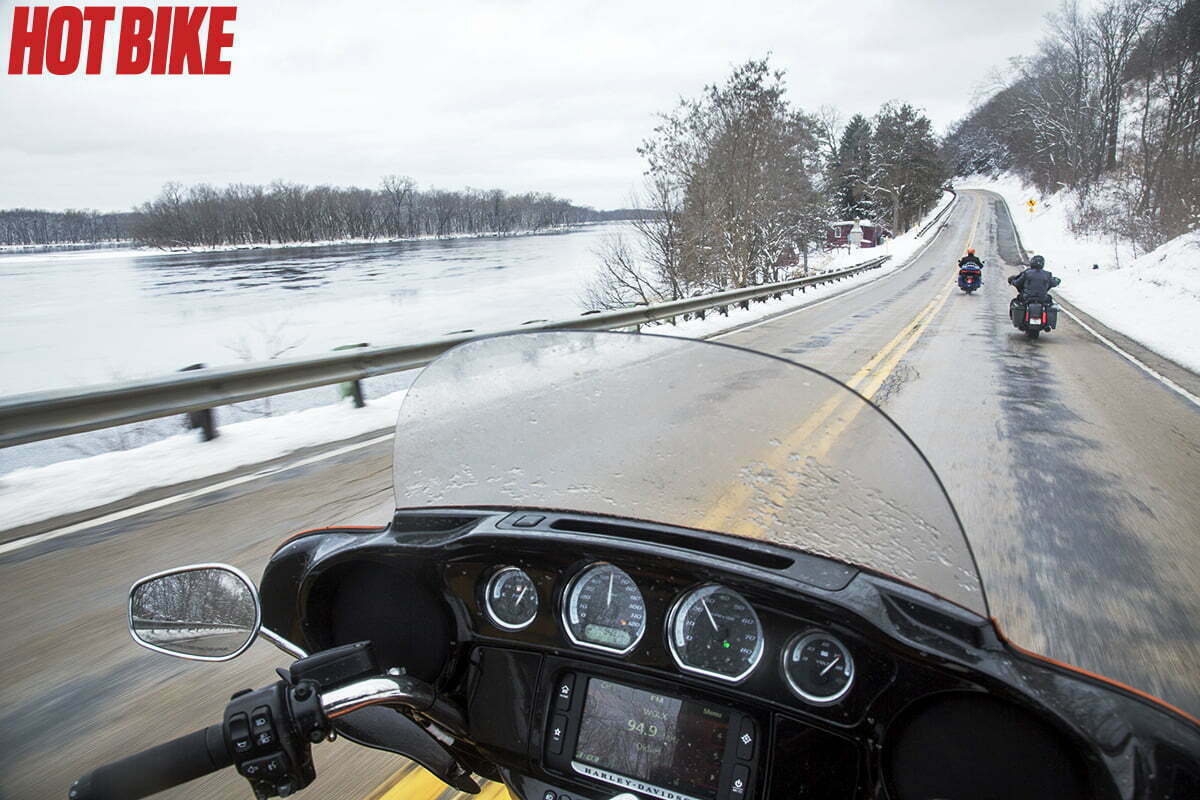 Even in white conditions, the countryside of Wisconsin is quite scenic. 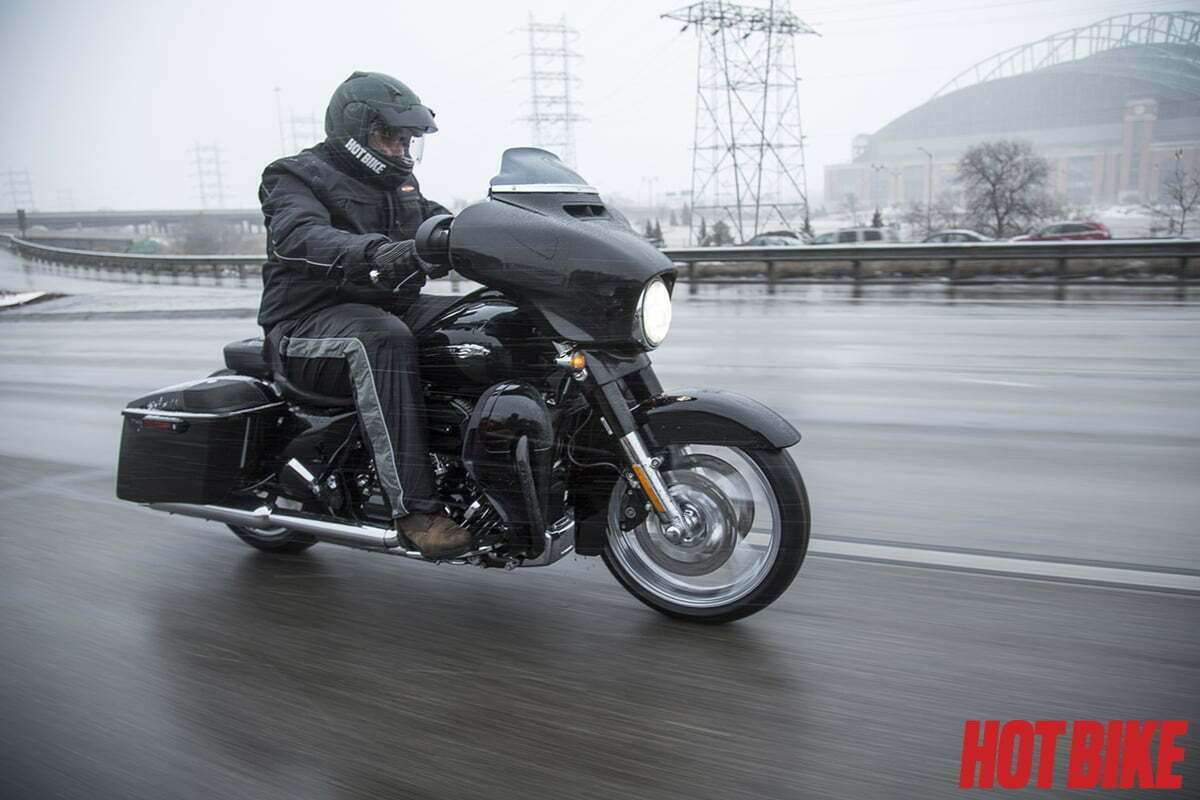 Making our way out of Milwaukee 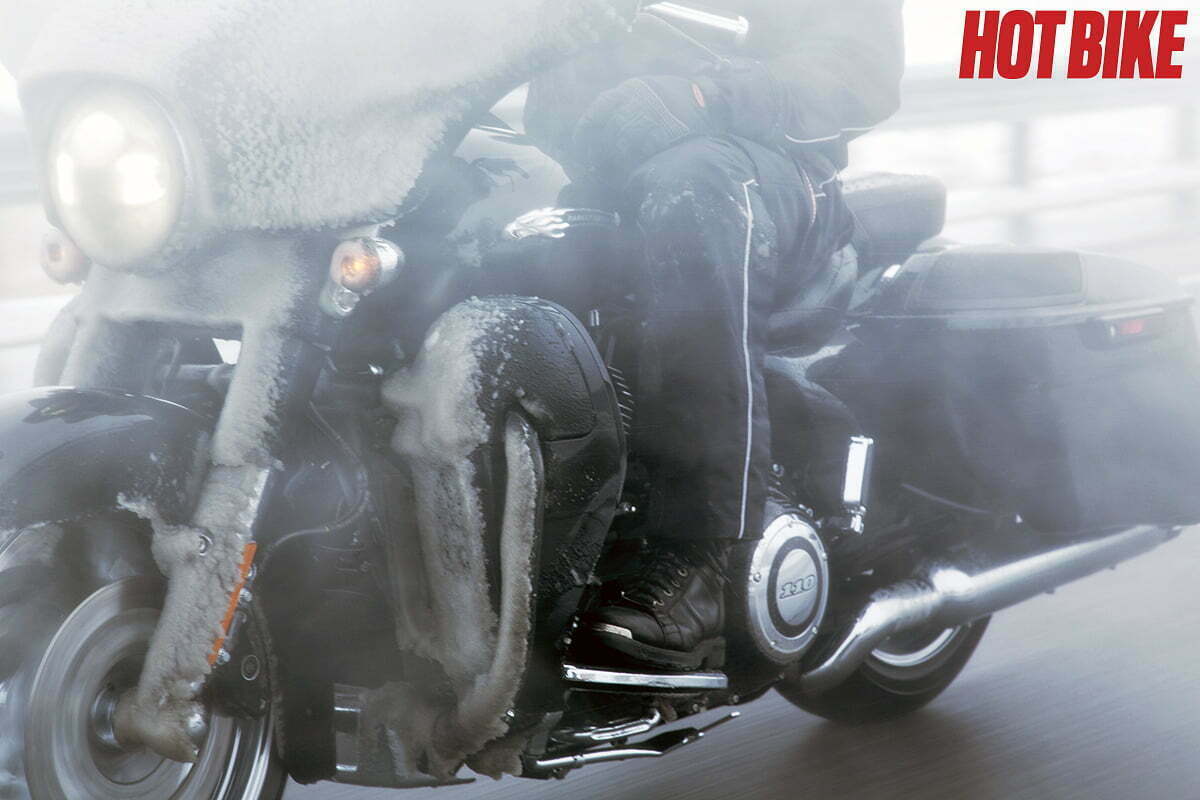 Blitzing through snow flurries during day one of the trip 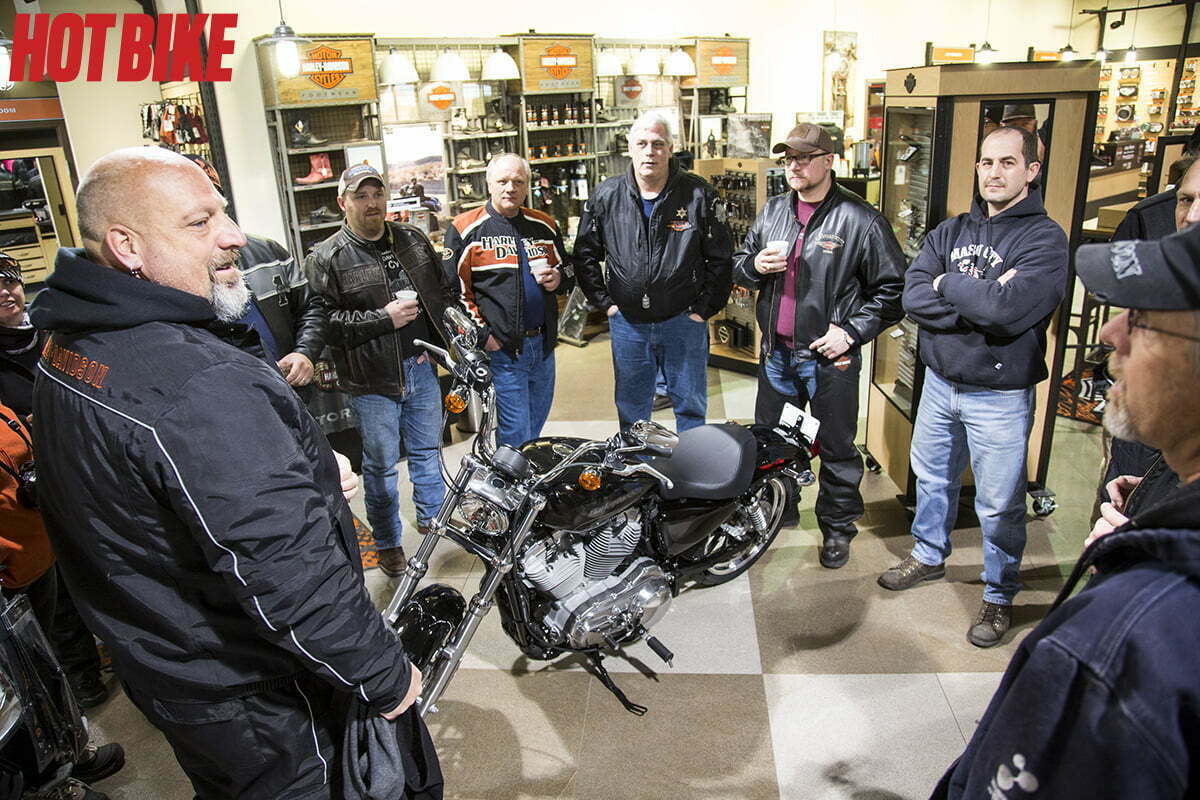 Warming up at Harley-Davidson of Mason City in Iowa 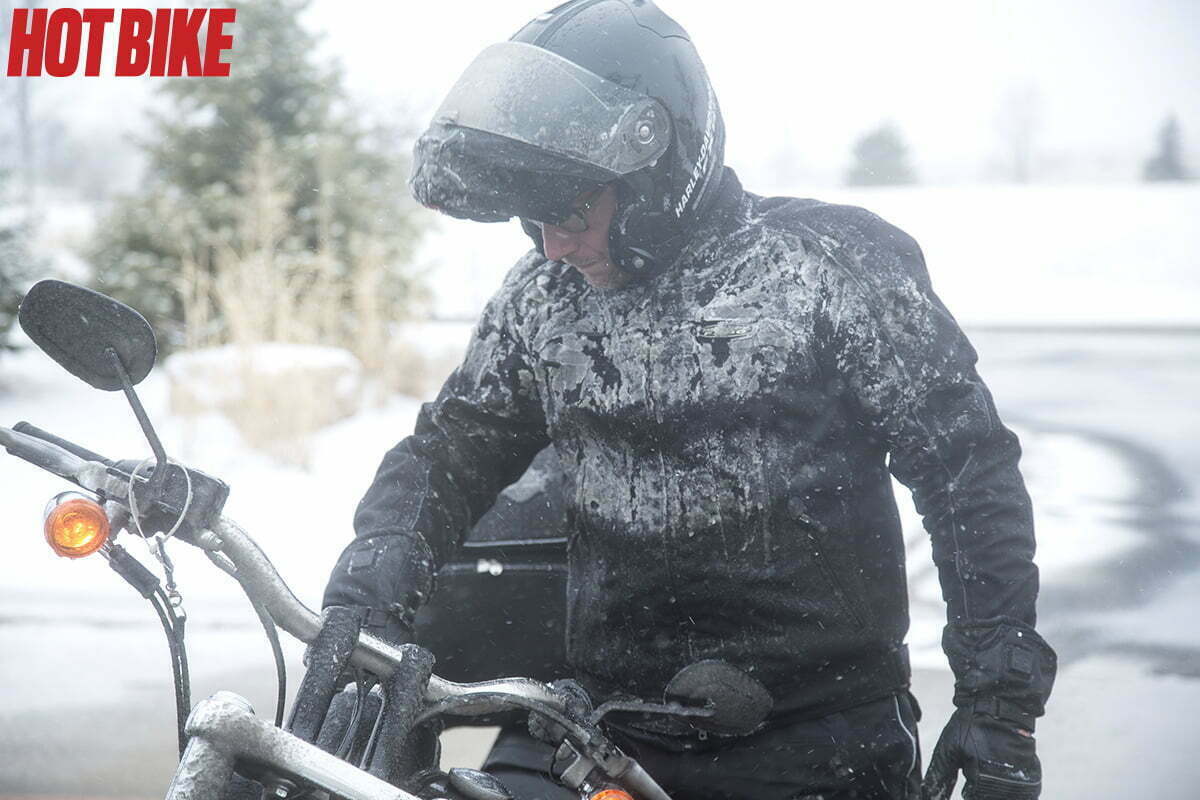 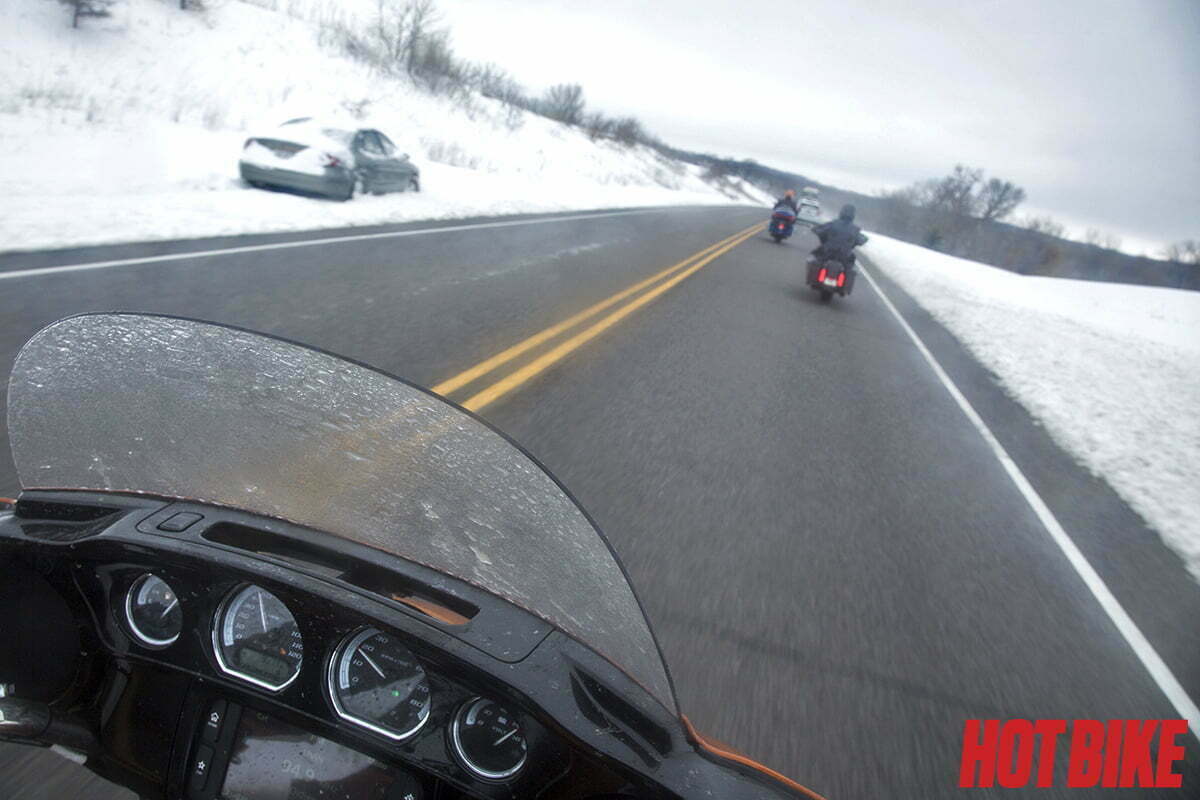 The conditions stranded a few cars, but it wasn’t stopping us from getting the bricks to Sturgis 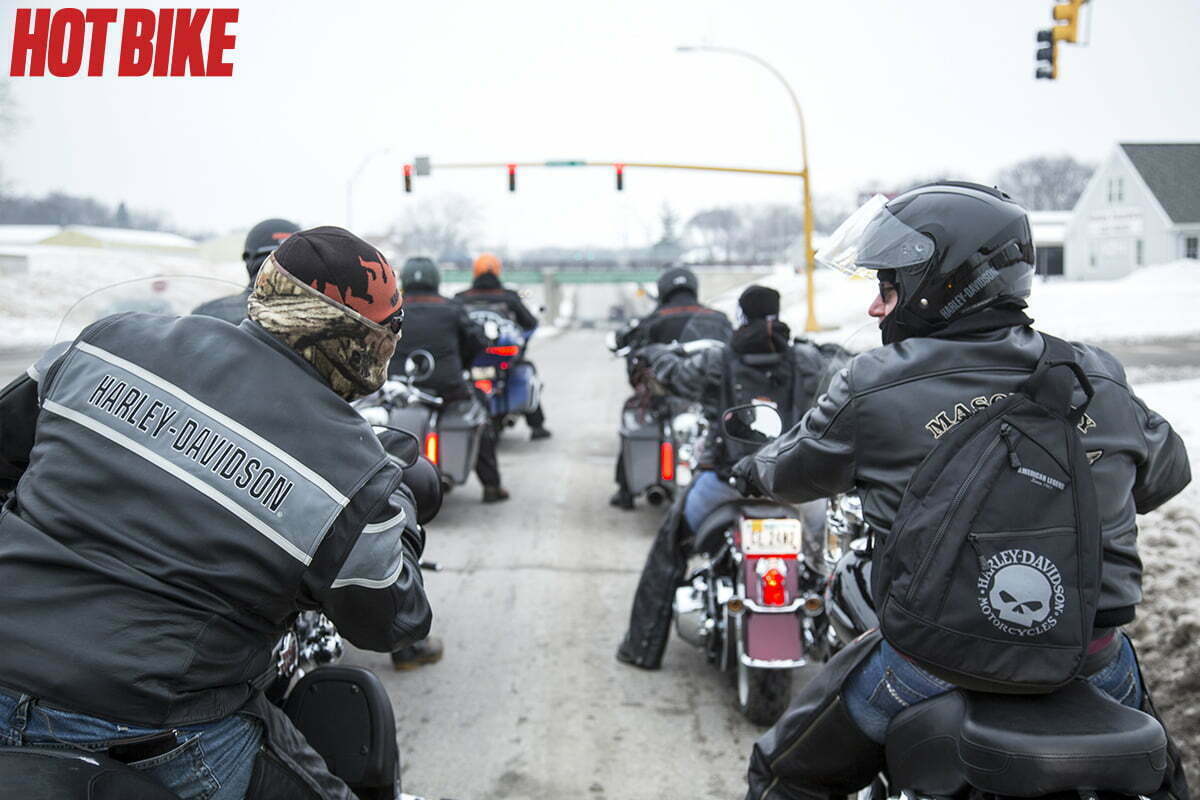 On the road with some HOG members.

Location for the Rally Point in downtown Sturgis

Bill Davidson,great-grandson of H-D founder William A. Davidson speaks at the groundbreaking

Design Rendering of the Rally Point

Carey Hart performing some groundbreaking duties aboard the Project Livewire

I shifted up a gear but the high pitched revs emitting from the Harley-Davidson CVO Street Glide I was piloting said otherwise.I glanced down to the shift side floorboard looking for some sort of issue. No trace of any mechanical problem, everything was in place as it should be. I moved my boot up and down and then noticed the problem,I couldn’t feel my toes, thus hampering my shifting. A direct result of the temperature failing to rise above 30ºF for the duration of the days ride.

Usually this would be a cause for concern, but I just laughed it off as it was all part of the adventure I was currently on. And what an adventure it had been on just the first day of this 3 day riding trip. Riding a nearly $40,000 motorcycle through snow, slush and freezing temperatures is not the usual curriculum on a press related ride from a major motorcycle manufacturer.I forgot to mention that I was also carrying a brick in my saddlebag , yes a brick.This was no normal press ride, it was a chance to be a part of Harley-Davidson history.

This was no normal press ride, it was a chance to be a part of Harley-Davidson history

It all started last month as I was was sitting behind my desk at the palatial Hot Bike Magazine offices sifting through an endless amount of emails. The subject line of an email from my boss and Hot Bike Magazine Editor in Chief, Jeff G. Holt, caught my attention. ” This is all you” is what it read. I scanned the first few sentences of the email quickly with my eyes and brain pulling out the pertinent info: You are to ride a Harley-Davidson from the MoCo’s headquarters in Milwaukee, Wisconsin to Sturgis, South Dakota. My fingers could not type out an excited response and hit the send button quick enough.I then did what I do for every trip I take, confide in my smart phone’s weather app. SNOW was the forecast for the upcoming ride in few weeks. “Well, this is going to be pretty interesting” I muttered to myself with a sly smile on my mug while making a mental note to dig around in my closet for some heated riding gear.

After my speedy reply I calmed down a bit and read the full email. As part of Harley’s recent 75-year agreement with the city of Sturgis making Harley-Davidson the rally’s official motorcycle,they were to build a site in downtown Sturgis for people to gather year round. The Harley-Davidson RALLY POINT is designed to be a hub for riders during the Sturgis Motorcycle Rally and it will also serve as a gathering point for the citizens of Sturgis throughout the year. The Rally Point will be host of everything from events, concerts, weddings and a rider photo area with the famous Sturgis sign in the nearby hills.

Along with the planned construction of the multi-purpose space was the re-naming of 2nd Street to Harley-Davidson Way.”It honors the legacy of our company’s founders along with all the extraordinary men and women who ride our motorcycles,” said Bill Davidson, great-grandson of Harley-Davidson founder William A. Davidson and vice president of the Harley-Davidson Museum.

The next part is where myself and a few other moto publication editors fit into this equation of Harley-Davidson history. To solidify the Harley-Davidson Rally Point’s heritage, 74 bricks from H-D headquarters which is 100 years old and for many years was the factory where new models rolled off the assembly line, were to be transported from Milwaukee to be integrated in the construction of the Sturgis Rally Point.One brick from the Harley-Davidson Museum was also included for good measure and bringing the total to 75 bricks. 75 being the number of years the Sturgis Rally is celebrating this year.

I would be carrying one brick from H-D headquarters in my saddlebag for the 900 mile ride. Myself, my fellow moto editor brethren and few hearty souls from within the Harley-Davison organization started the ride amidst snow flurries and sub-freezing temperatures in Milwaukee. That first day was quite entertaining, as riding a touring motorcycle through conditions that would make a Woolly Mammoth happy was a new experience for myself. I also learned to love heated riding gear, haha. Everybody made it through unscathed but we all had plenty of good tales to tell at dinner that night.

The next 2 days were spent riding in more sub-freezing weather but with rain and wind to battle instead of snow.These bricks were getting to Sturgis, damn the conditions! We stopped at a handful of Harley-Davidson dealerships along the way to warm up and meet up with adventurous members of local
HOG( Harley Owners Group) chapters that joined in on the Brick Ride. New friends were made along with a bunch of cool stories from the adventure.

The 3 day odyssey concluded as we pulled into downtown Sturgis where at the corner of the newly named Harley-Davidson Way and Main Street we were greeted by a mass of media and local dignitaries ready for the official groundbreaking ceremonies of the Rally point.
Sturgis Mayor Mark Carstensen along with motocross freestyle legend and Grand Marshall of the 2015 Sturgis Mayor’s Ride Carey Hart received the bricks fresh off the amazing trek. Mayor Carstensen and Cary Hart spoke with enthusiasm about the future for the Rally Point as an array of news reporters and cameras captured the moment. Bill Davidson spoke excitedly at the groundbreaking,“Sturgis is a mecca for riders around the world. The Harley-Davidson Rally Point establishes a new site in downtown Sturgis for people to gather year round.”

Sturgis is a mecca for riders around the world. The Harley-Davidson Rally Point establishes a new site in downtown Sturgis for people to gather year round -Bill Davidson

After the speeches were finished, Carey Hart and Flat track racing ace Brad “The Bullet” Baker broke ground at the Rally Point with some burnouts aboard a Project Livewire and a 2015 Street 750.After the smoke and dust settled, construction crews and large equipment immediately moved in and started the construction of the Harley-Davidson Rally Point.

I am really looking forward to my trip this year for the 75th Sturgis Motorcycle Rally and visiting the Rally Point. I can tell my friends ” I helped build this” with some truth behind it. I will look for the 75 bricks with a sense of pride and feel honored that I was able to be a small piece of Harley-Davidson history, a brick sized piece to be precise.

For more info on the Rally Point and the 75th Sturgis Motorcycle Rally, go here: www.h-d.com/sturgis

‹ The Game of Fame – A Custom TPJ Leonor › Antigravity Batteries

The Bell Helmets Race Star packs a lot of features and safety into a great-looking and affordable package. FEATURES • […]

Saturday, June 25th, RUSTY & T-ROD are The Grand Marshall’s for RIDE THE COAST Pack Ride, benefitting The Boys and […]

My name is Tyler Bex and I’m just a 27 year old punk rocker from Indiana. There isn’t much here […]