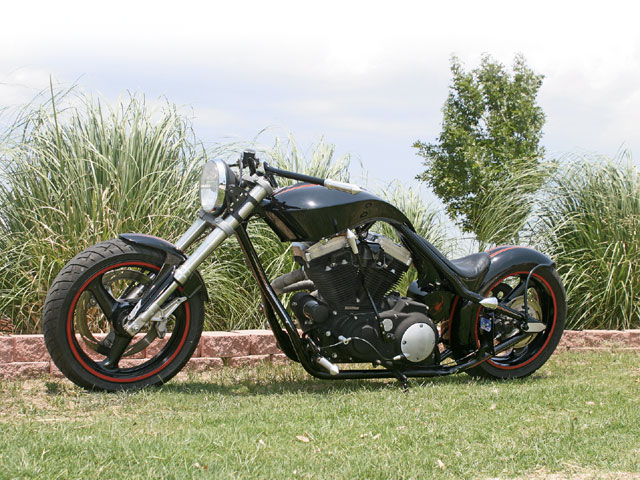 Mentioning the word “Buell” usually elicits a love-it-or-hate-it response, but every so often you run into “I turned it into what I really wanted,” which is what happened with this bike. It was born an X-1 Lightning in 2001; its owner didn’t like the sport-bike vibe, but dug the motor enough to reincarnate it as you see here.

It was the brainchild of Butch Mitchell and Dawn Norakas at Stinger Cycles in Las Vegas, NV. “It gave us a lot of challenges,” Stinger co-owner Dawn told us, “but we’re really happy with the way things worked out.” And she’d know; after working for Chrome Specialties’ marketing department for years, she swam over to the building end of the pool and took the plunge by creating her own bike while learning how to weld and make parts. That was more than six years ago, and she’s kept at it, honing her craft all the while. Two years after she started making motorcycles, she and Butch founded Stinger Custom Cycles, and it’s been her life’s passion ever since.

They came across Redneck Engineering’s new Buell frame during Daytona Bikeweek in ’04, and that started the project. Mitchell was looking for something to do to his Buell, and the Redneck chassis was perfect for him. Stinger got ahold of one of Redneck’s second Buell Mutant rigids and put it to good use, transferring the X-1 motor and drivetrain into it and building the rest of the sled around it.

The motor wasn’t the only Buell part that jumped ship, though. The Stinger team wanted the new bike to look slick, but at the same time they weren’t looking to spend anyone’s life savings making that happen, so the shop cannibalized stock parts from the original Lightning to save money. As a side effect, Butch’s new ride kept some of the X-1 styling. The hand controls, wheels, brakes, and forks were transferred to the new machine, as was the front fender (after Dawn and crew trimmed it down)

Other things they built themselves, and because of its slick, modern look, we got the impression that Dawn had a major hand in making it all happen. “Butch likes old-school bobbers; I’m into the sleek, new stuff,” she informed us. “Which makes us a great team, because between the two of us we can build anything.” They dressed up the motor with their own pipes and velocity stacks, and the new gas tank flows beautifully from neck to seat pan, but other changes were more functional than aesthetic, especially in the ergo department. The new Z-bars not only look good, they’re wider than the old Buell set, so the rider’s arms aren’t scrunched in. The new foot controls also sit forward on the frame, which is much more to Butch’s liking.

All of this took place in 2004, and while the original goal was a great-looking bike in a (relatively) reasonable budget, it was also the launching point for a much more ambitious Buell from Stinger-something along the lines of a $50,000-plus high-end bike. If they were able to do all of this with their “budget” bike, it’ll be interesting to see where they go with a sky’s-the-limit approach.

Before After 1. The first step was to wheel the bike into the shop to remove all the sheetmetal. 2. […]

Readers of Hot Bike are no doubt familiar with the road tests we perform on a monthly basis. Normally we […]

Tired of hearing how custom bikes are dead and seeing a world full of OE replacement parts and bagger parts, […]