Home » Uncategorized » Living the Life | To Hell And Back 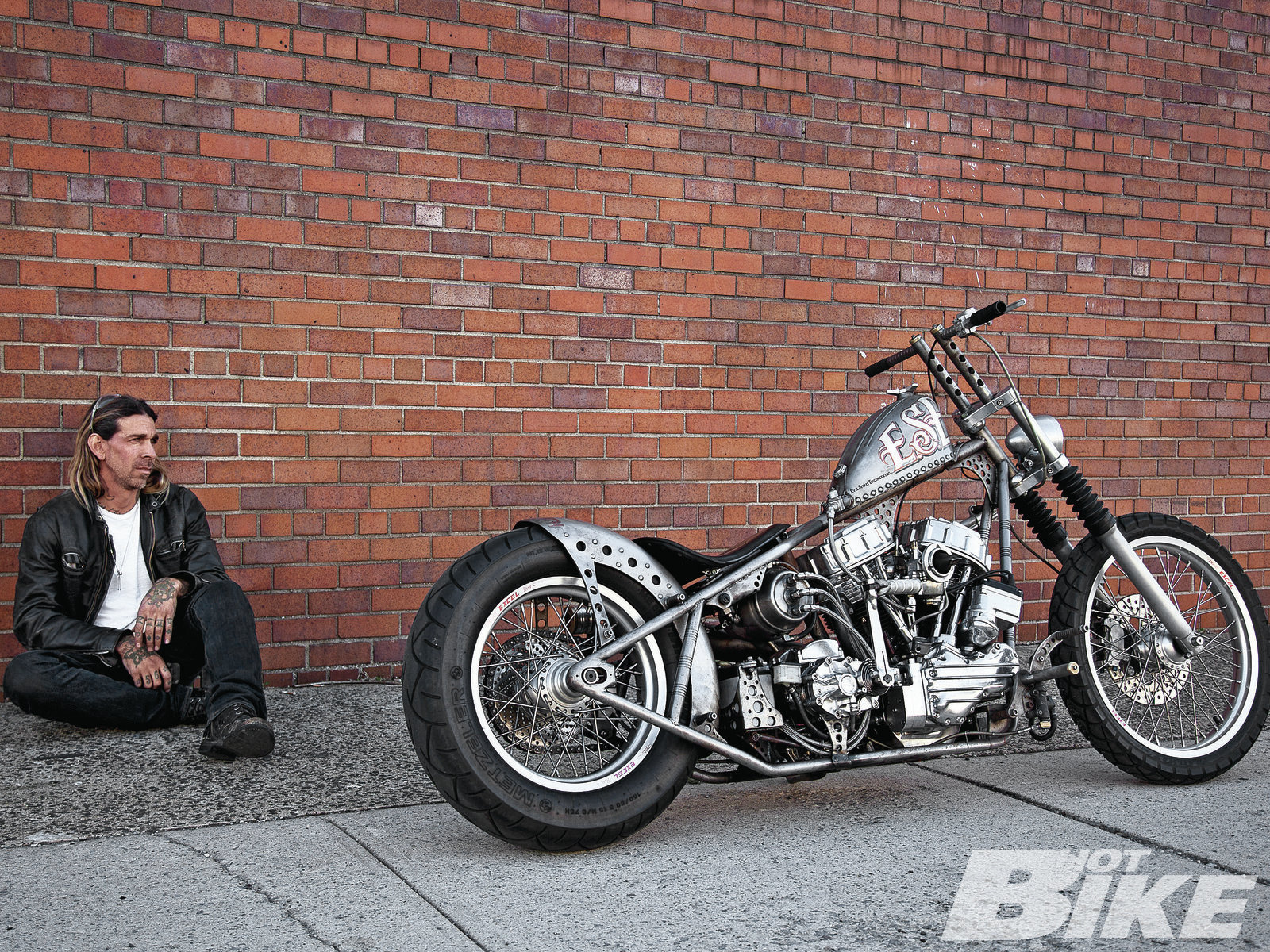 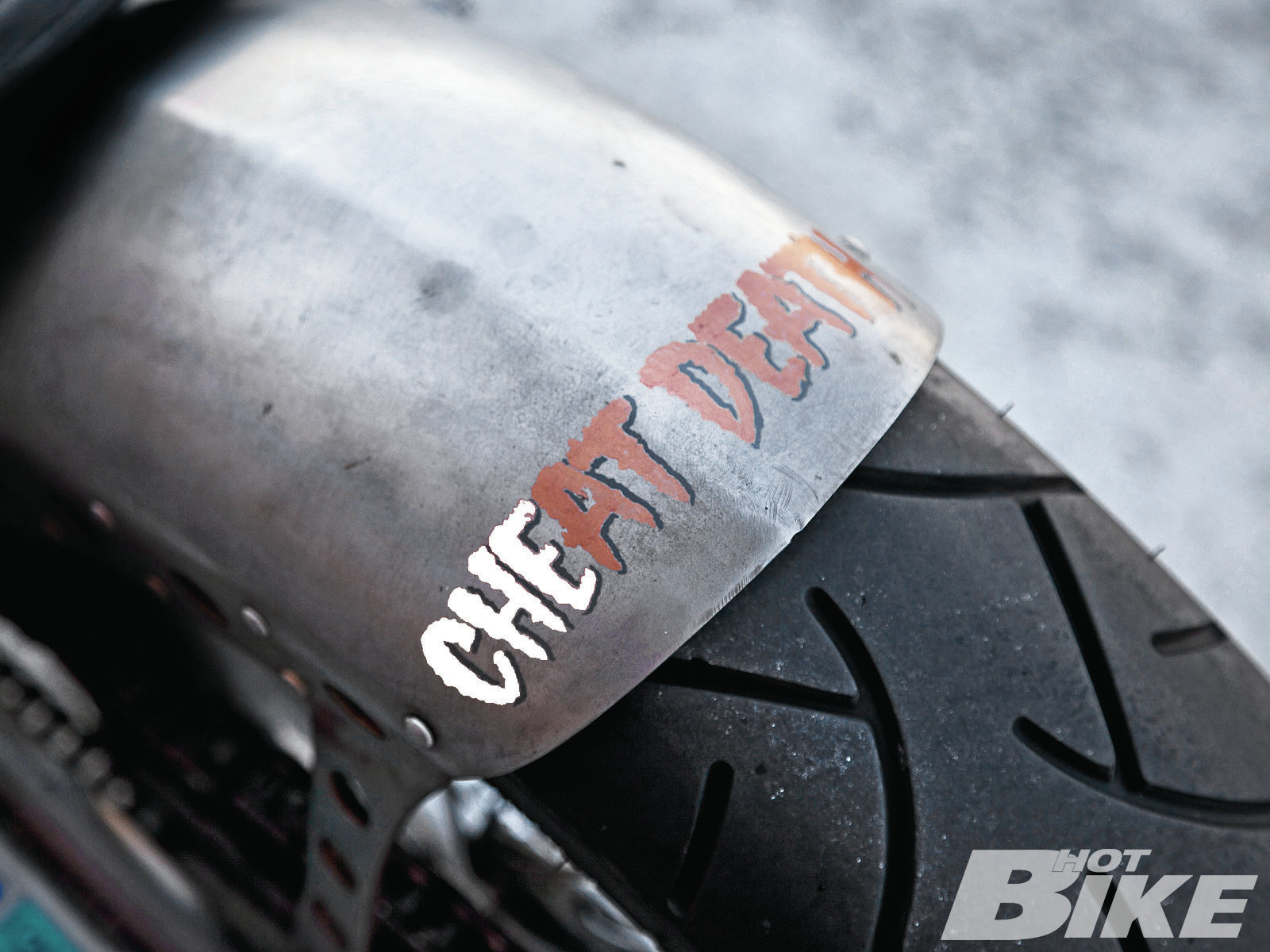 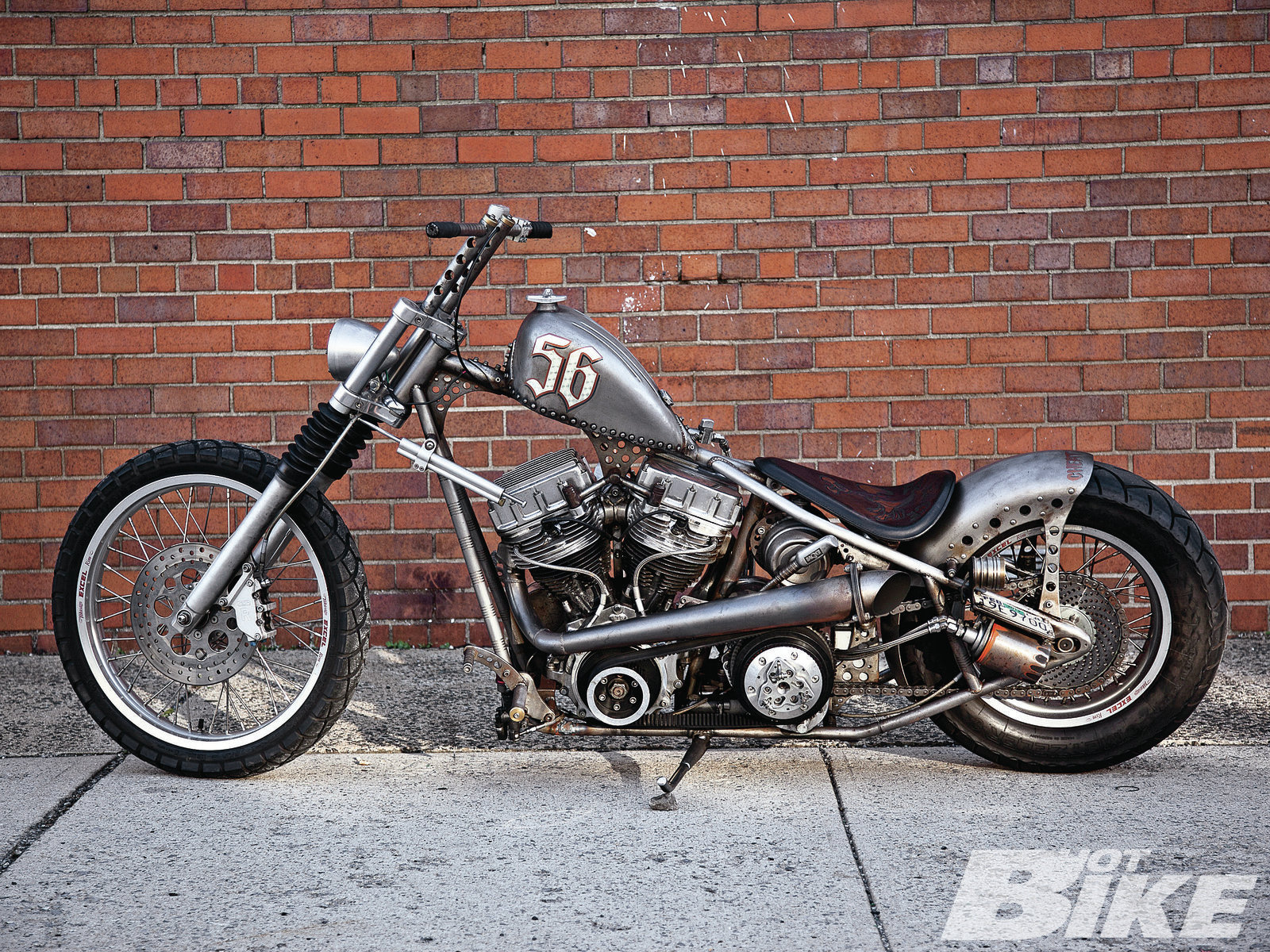 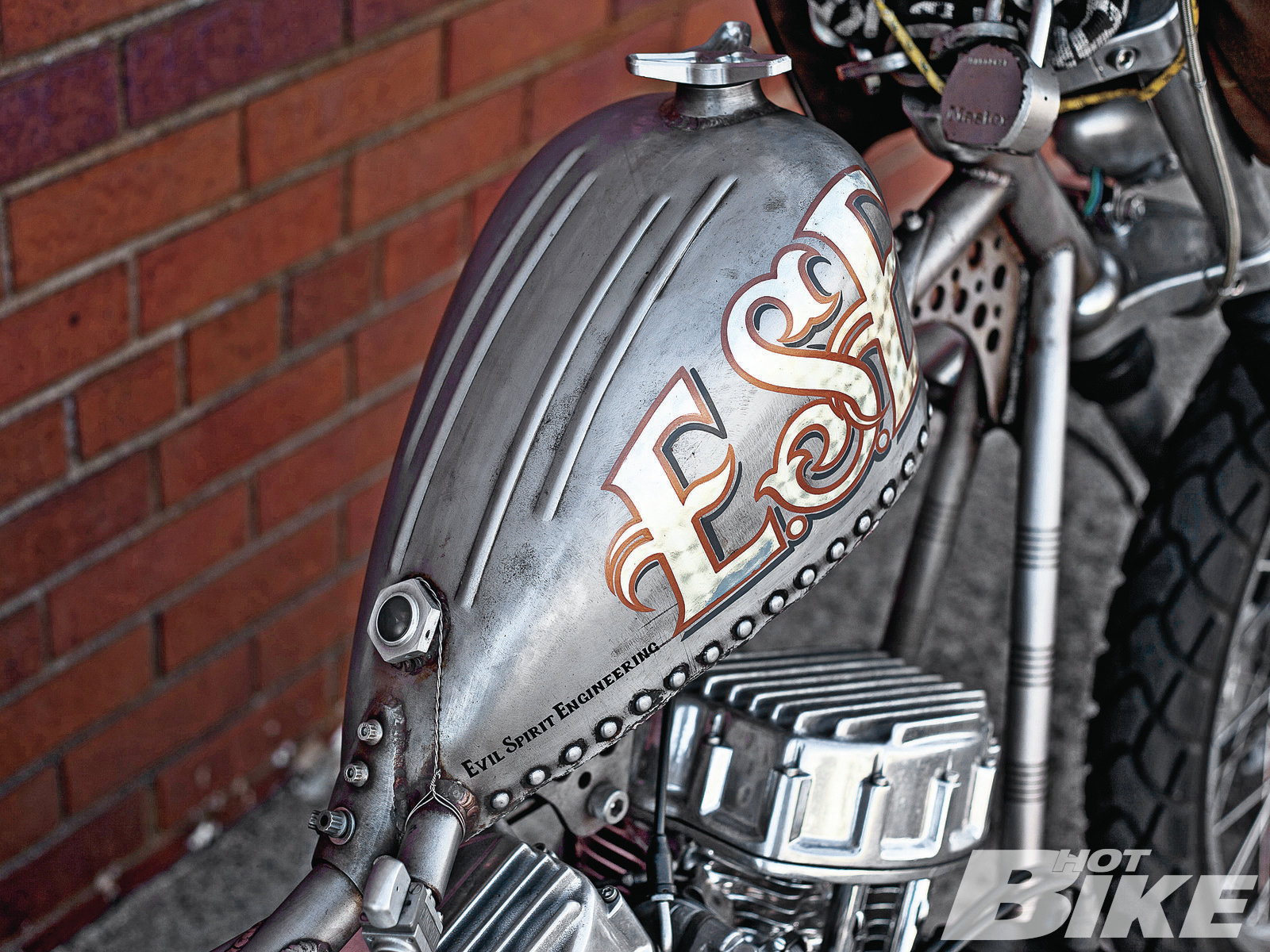 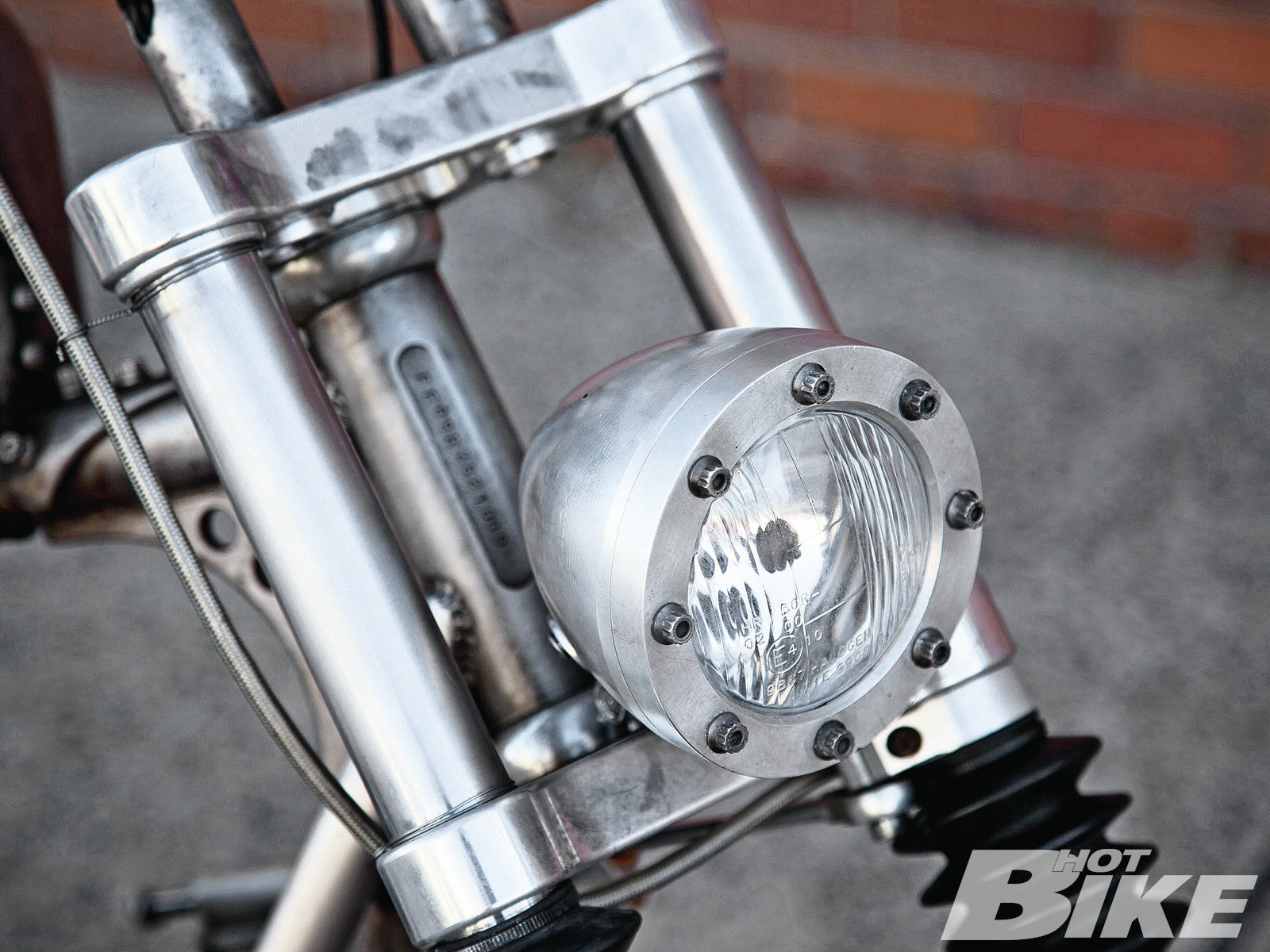 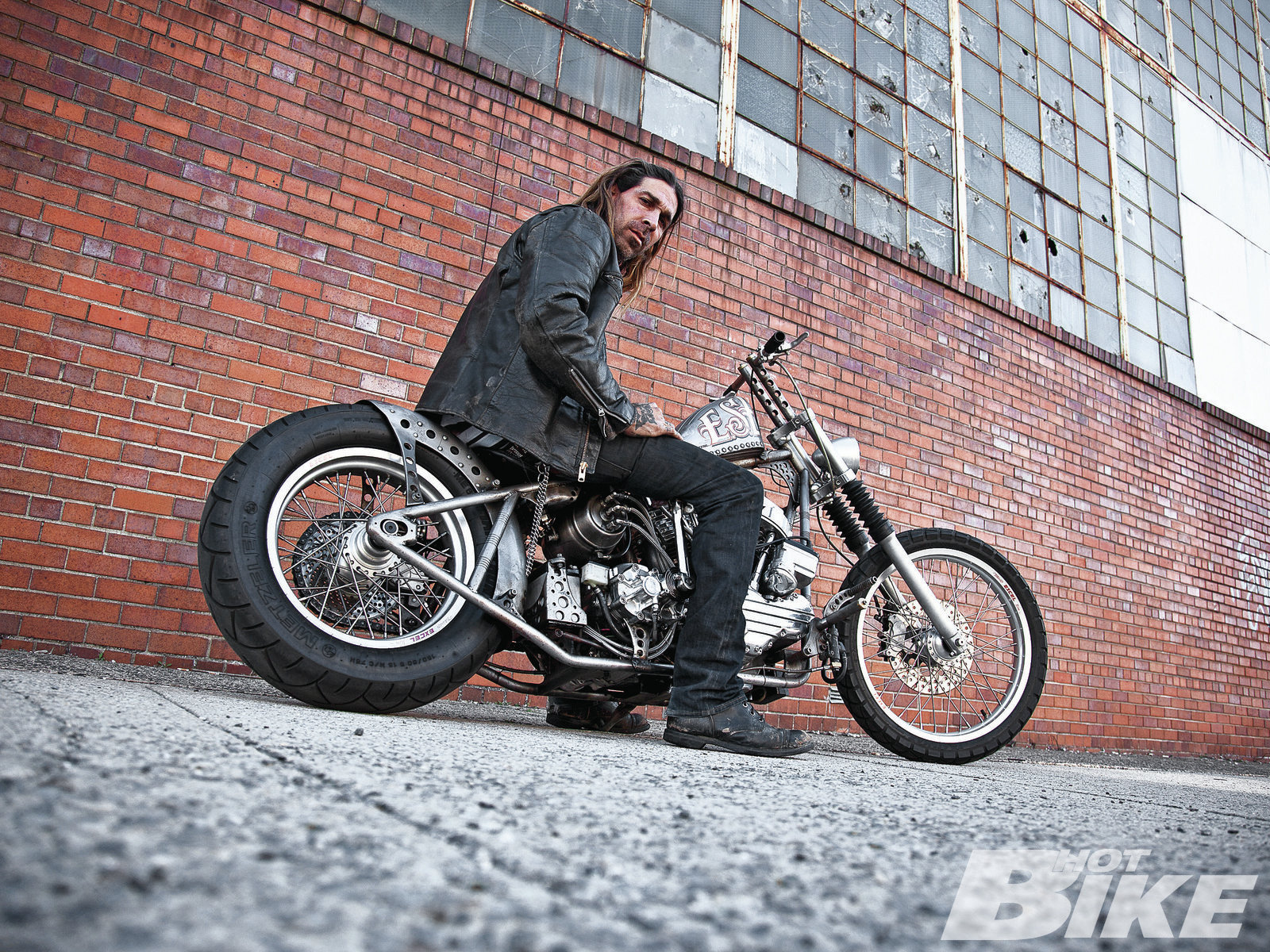 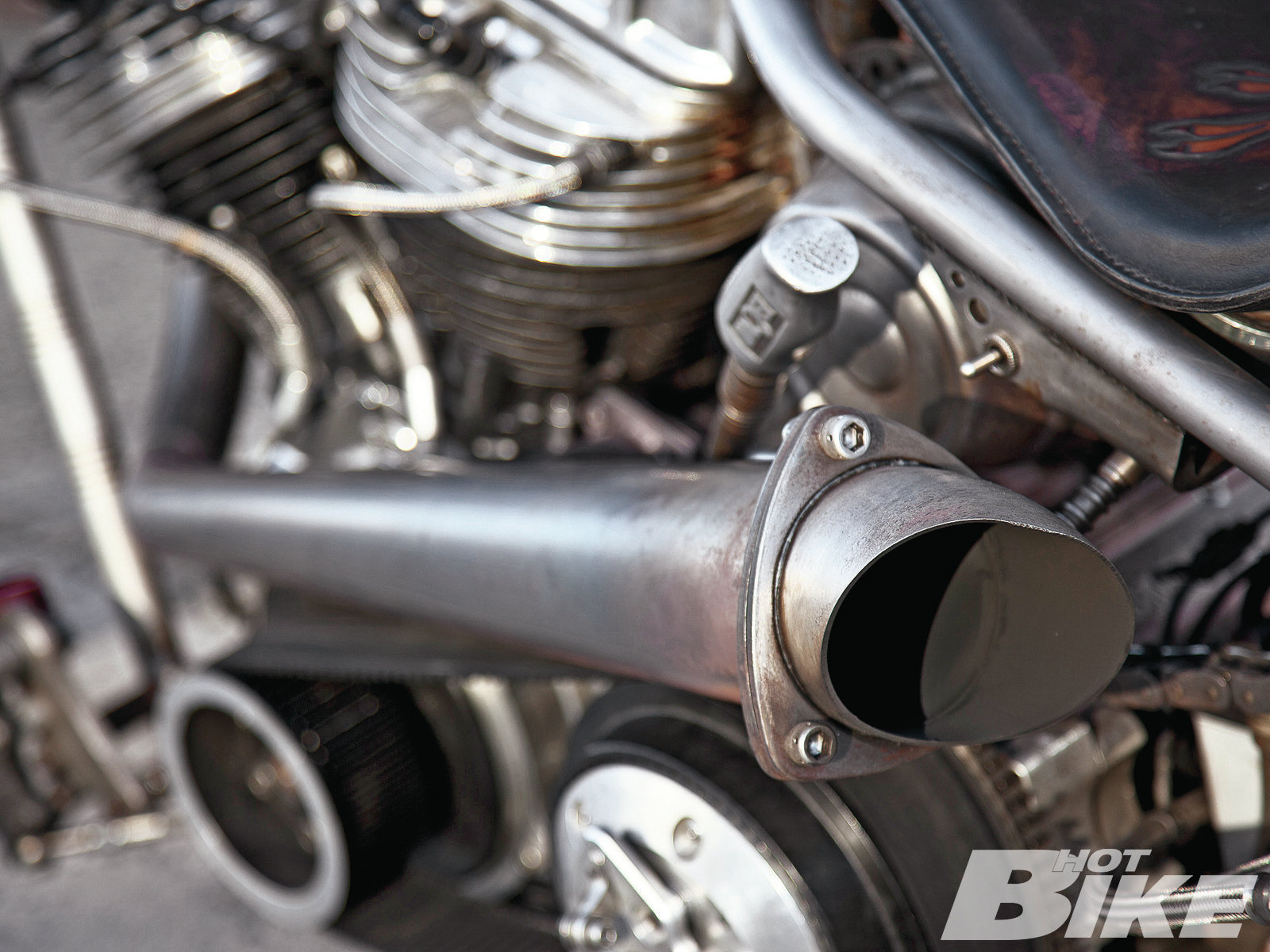 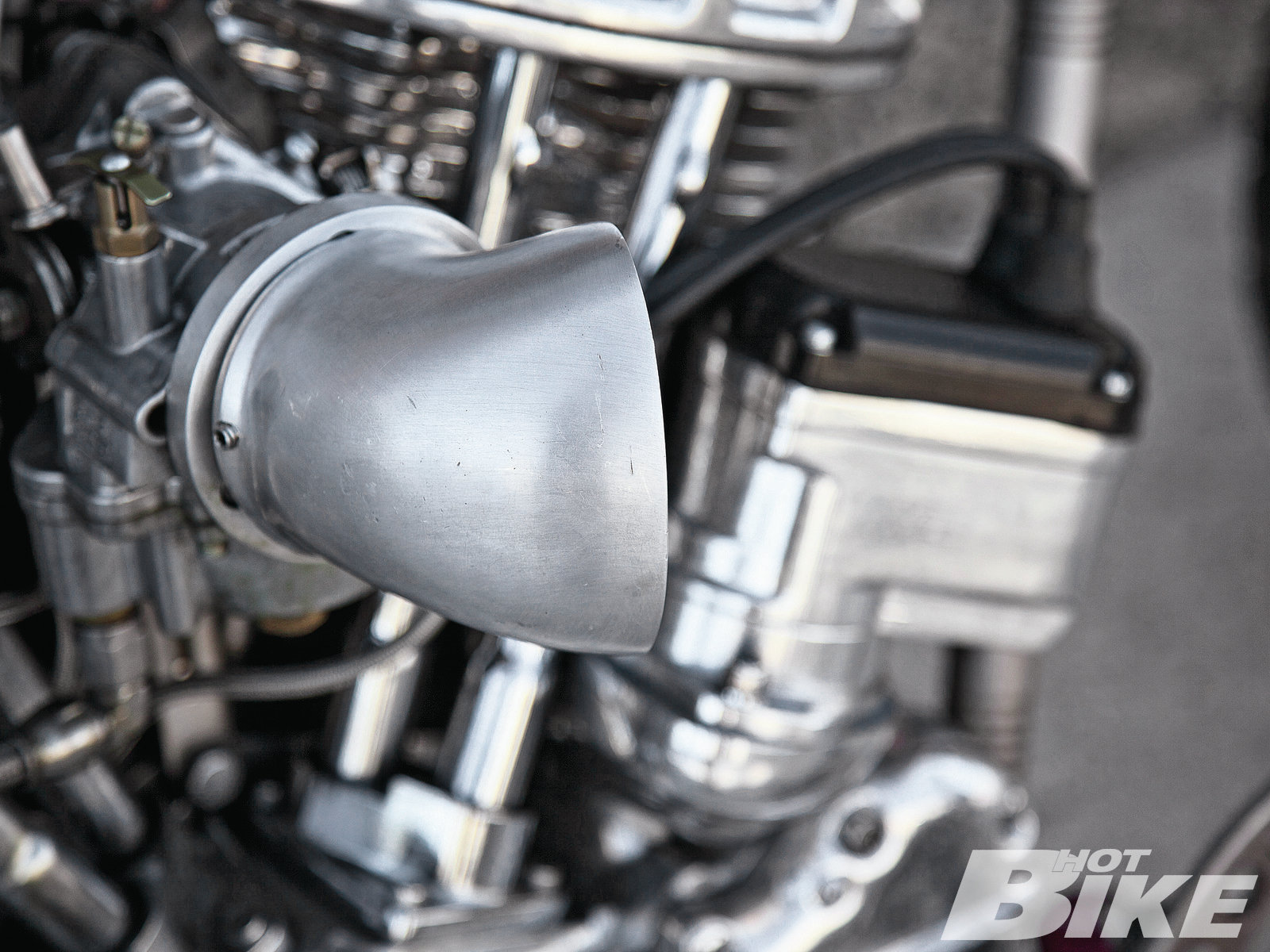 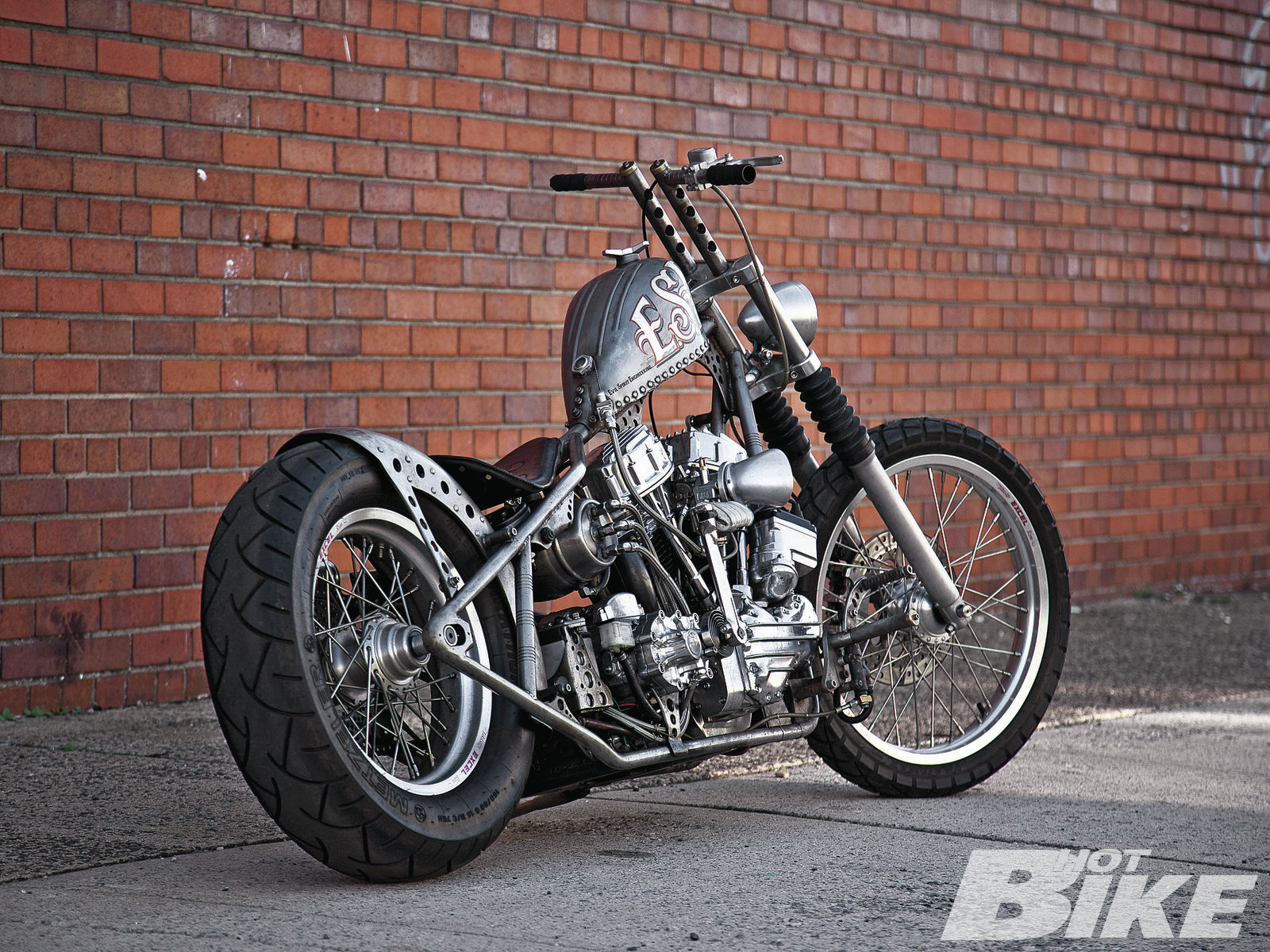 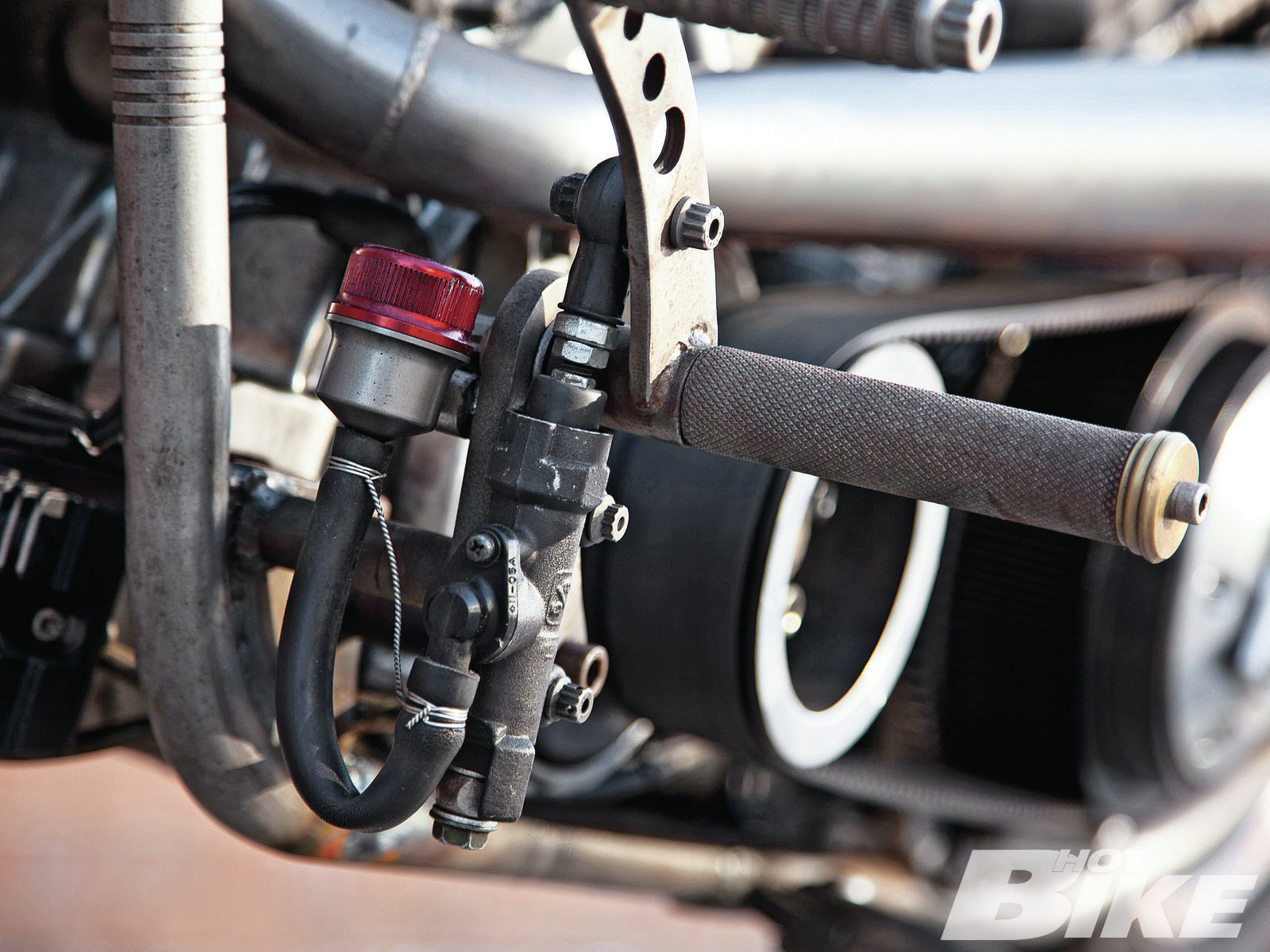 There is a lot going on with this bike, and there always has been. I’ve seen it in print, at some pretty big shows, and now I am sitting on it at Michael Barragan’s shop in Burbank, California. “Patience” is parked right next to a recently scored ’34 Ford Coupe. Barragan is in the middle of articulating what happened on Sept 19, 2009.

“So I’m doing like 35-40 mph, hand-shifting/foot-clutching, riding west on Riverside Dr. when I come rolling up to the intersection of Buena Vista St. The Disney Studios are on my left and so is the 134 freeway. I’m headed to Bob’s Big Boy and I’m working out the kinks on this customer’s bike…I lift off the throttle as I come into the intersection because there’s this car waiting to make a left…”

I’m checking out Patience as he relives the crash. He’s holding onto a Camel cigarette and a Bic lighter and he uses them to gesticulate how the bike and the car collided that day.

“She hit me so hard, all of her air bags deployed. I thought she was going to hit me so I was trying to jump over the car. I almost made it but my leg got caught on the handlebar right here.”

He’s pointing at Patience’s throttle and riser, motioning how his foot was trapped and where it broke his leg. I’m cringing as he relives it. You know, like when you see someone get kicked in the balls—that kind of a cringe. He continues…

“I ended up at County Hospital, no insurance. I didn’t want to look at my leg. This Korean lady called 9-1-1 as I was sitting there in shock thinking, ‘I can fix the bike. I can fix it.’ In 20 years of riding this is the first time I was ever hit. I was starting to get scared so I called my dad. Thank god for my dad.”

I feel bad because I interrupt Barragan. He’s so engrossed in the story when I remind him I met his father in Japan a few years back, and he proceeds telling me how his dad really took charge and genuinely handled this debacle for him.

“The bike was going to Artistry & Iron in Las Vegas before I was hit. It was a $20,000 purse and I figured I would just send the bike I entered, even though I got hit on it! So my dad took the bike to the show. People freaked out, I mean he even put pictures of the accident all over the display. It was gnarly…”

I press him to get back to the hospital and the coma.

“All I remember was the clean white room. Man it was white. I started to fade off and have crazy dreams and was in and out of coma for almost two weeks. I woke up and had no idea where I was. My dad was there, and he gently brought me back into reality and told me what happened. I was rocked man; I mean all I could think about were my kids. I just felt like god was telling me to slow down for a while, so many times, and I just didn’t listen. I felt like he was saying spend more time with my kids, my family, my business, and I just wasn’t listening. So he took this car and slammed it into me and yelled, ‘I said stop!’”

He’s looking at his cigarette at this point, thinking of lighting it when I ask about karma.

“Lets just say it took me almost dying to look at my relationship and really try at it again. The accident shocked me into the next series of trying with my girl. I really started to slow down. I started to work on my patience. So I get out of the hospital and I figure I’d give myself a week before I went back to the shop. When I did get back to the shop I was so uninspired. How am I gonna make a living? How am I gonna to get back to this…”

Barragan opens his arms wide, motioning to the eight bikes and five cars that litter every nook and cranny of the space. There is a lot of work to be completed.

“I can’t build a bike right now. I can barely walk. So I look over at my apprentice, Juan, and say, ‘Let’s build a car.’ So we built the ’31 Coupe you always see me rollin’ around in. Juan helped me do everything. It took a while man but as the drugs wore off, I started coming back to it. A lot of things happened that wouldn’t have happened if I didn’t get hit…you know what I mean? Things are kinda good now. Ok, so fast-forward to Born Free II. I set up a booth and while I’m sitting there, Sugar Bear leans in and tells me that he spoke with my dad in Las Vegas right after I was hit. Sugar Bear tells me this deep intense story about what he did with his bike after he was hit. How he completely rebuilt it, every nut and bolt, then one day he got on the freeway and shoved it into the fast lane because he knew he had to. He had to live to ride another day.”

The bike man! Patience…I’m still dying to know how you ended up with it.

“Oh, then one day, the owner shows up with the bike and says he’s tried to have a few guys fix it…well they can’t. So he asks if I’ll fix it. Actually, he asked if I wanted to buy it! I had to think about that one…and I told him to leave it. That night, I walked over to my shelves and I was staring at a box of all the bits and pieces from the bike. I decided I had to rebuild this bike. All of Sugar Bear’s advice came rolling back in. I was going to buy this bike. I was inspired to build a bike again…by myself, and do it like Sugar Bear did. Not only that, I was going to enter it in Artistry & Iron again, only one year later.”

Finally, he takes the Camel and lights it. I notice his full-face helmet on the desk. I can feel he’s watching me and waiting for my next question when my eyes look down at the Chopper Dave pegs, which aptly read, “Cheat” and “Death.” Then I glance at the saddle with “Patience” tooled in handsomely by Duane Ballard. We lock eyes again when he raises his brow and exhales smoke into his shop. Staring at me with a HUGE smile, he says…

We started off with a frame and a few boxes of parts. Not knowing what is in the boxes was […]

Hitch-Mounted Racks For Your Ebike

A hitch-mounted rack allows you to take your ebike further than ever imagined. Amazon The ebike is an excellent vehicle […]

Black is the new black. Courtesy of Drag Specialties Blacked out or chromed? It’s a question bike owners have asked […]