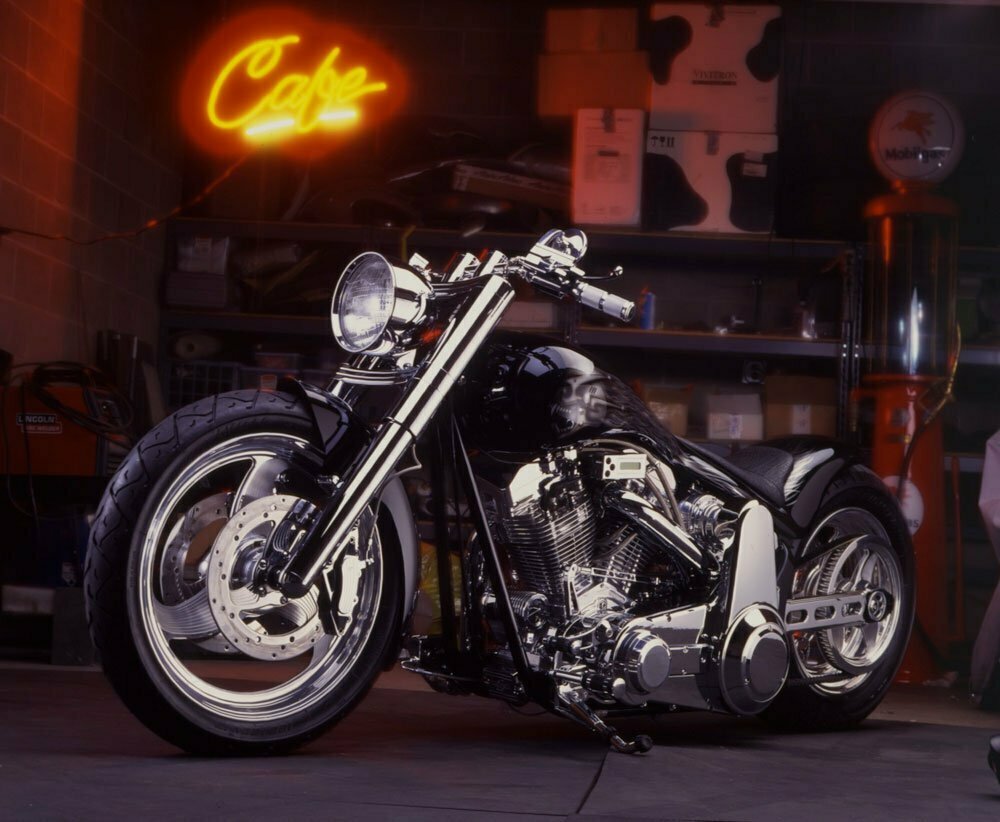 This article was originally published in the August-September 1998 issue of Cycle World’s Big Twin magazine.

Until five years ago, Lynn Ashcroft was your basic sort of attorney. He’s a trial lawyer, usually for the defense, and belongs to one of the major law firms in Salem, Oregon. And while he’s always been what the school crowd calls “mechanically inclined,” the extent of his involvement in such things had been limited to fooling with cars in his youth some 20 or so years ago.

Then, for the same illogical reasons that have beguiled all of us, Ashcroft discovered Harley-Davidsons. He bought an FXR and immediately concluded that it seemed capable of improvement. He got an aftermarket frame, revised the bike his way and got a trophy in a local show.

While he was packing up to leave that show, he overheard a disgruntled rival make a sarcastic remark about beginner’s luck, as if Ashcroft had stumbled into the win.

Oh yeah? he thought to himself. So, he built another custom, and this one won its class at Cycle World’s Seattle show.

Then he got really serious. The bike you see here is the result. 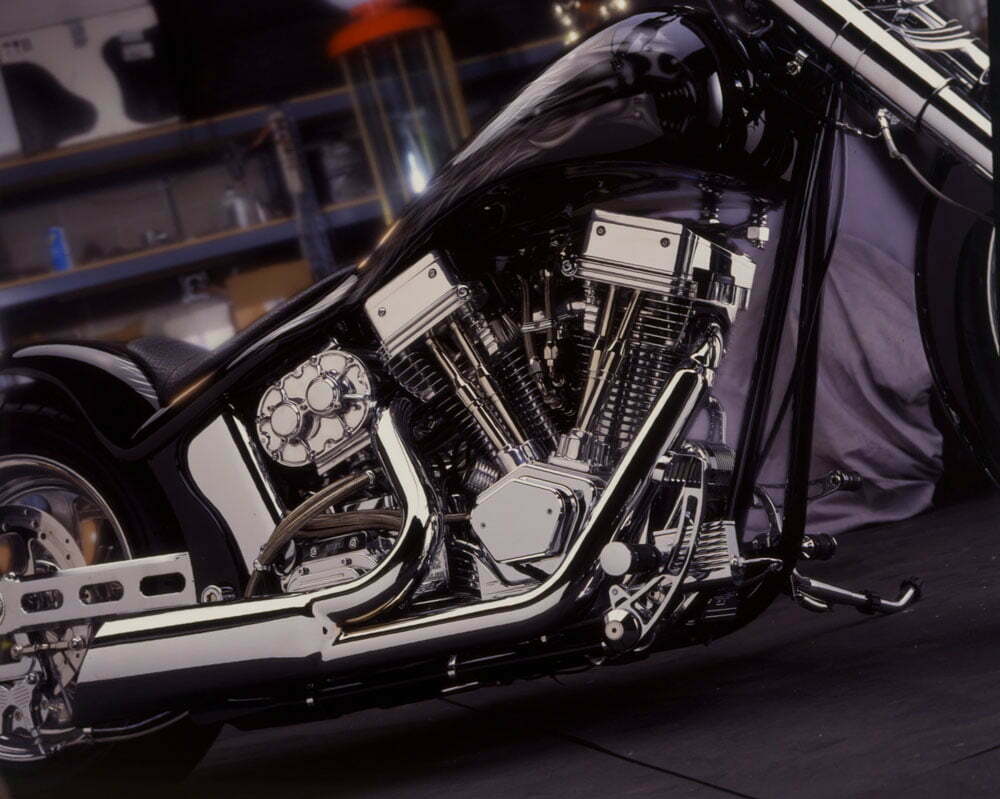 Ashcroft’s super-sanitary, one-of-a-kind blower installation incorporates some of the electronic fuel-injection system’s components in the swingarm.

What most of us see first is the one-piece body, sculpted in steel and comprising the seat, rear fender and tanks.

Next on the impact scale has to be the supercharger, neatly installed behind the engine. Then there’s the electronic fuel injection, the easily accessed tuning controls, the one-sided swingarm…enough, already. This is a dazzling piece of work, and of art; but because it was done by an amateur with no professional training, it’s most useful to trace the motorcycle’s progress.

Ashcroft began with a plan. He made an outline of what he wanted to accomplish and the parts he’d need, then he conferred with Tim Conder, a Salem designer and painter. Conder, in turn, drew Ashcroft’s vision, put­ting the words into pictures. When the drawings finally reflected what Ashcroft had in mind, he prepared a list of things to buy, bought them, then set to work. The complete project took two years, with the first six months devoted to planning and the next 18 to doing the actual work.

Ashcroft began with an Atlas Softail frame, stretched several inches because the space was needed behind the engine. That, literally, is where the supercharger comes in. The compressor is a Magnacharger, a positive-displacement blower. It contains paddles, so to speak, that are mechanically driven and move a certain amount of air with each revolution, as compared with a vane-type blower that swirls the air forward or a turbo­charger that’s driven by exhaust pressure.

The standard installation of a Magnacharger puts the compressor on its end, outboard of the engine’s right side. That’s an awkward place to mount and drive the unit, the only virtue being the use of available space. But Ashcroft’s design made alternative space and then tucked the compressor inside. 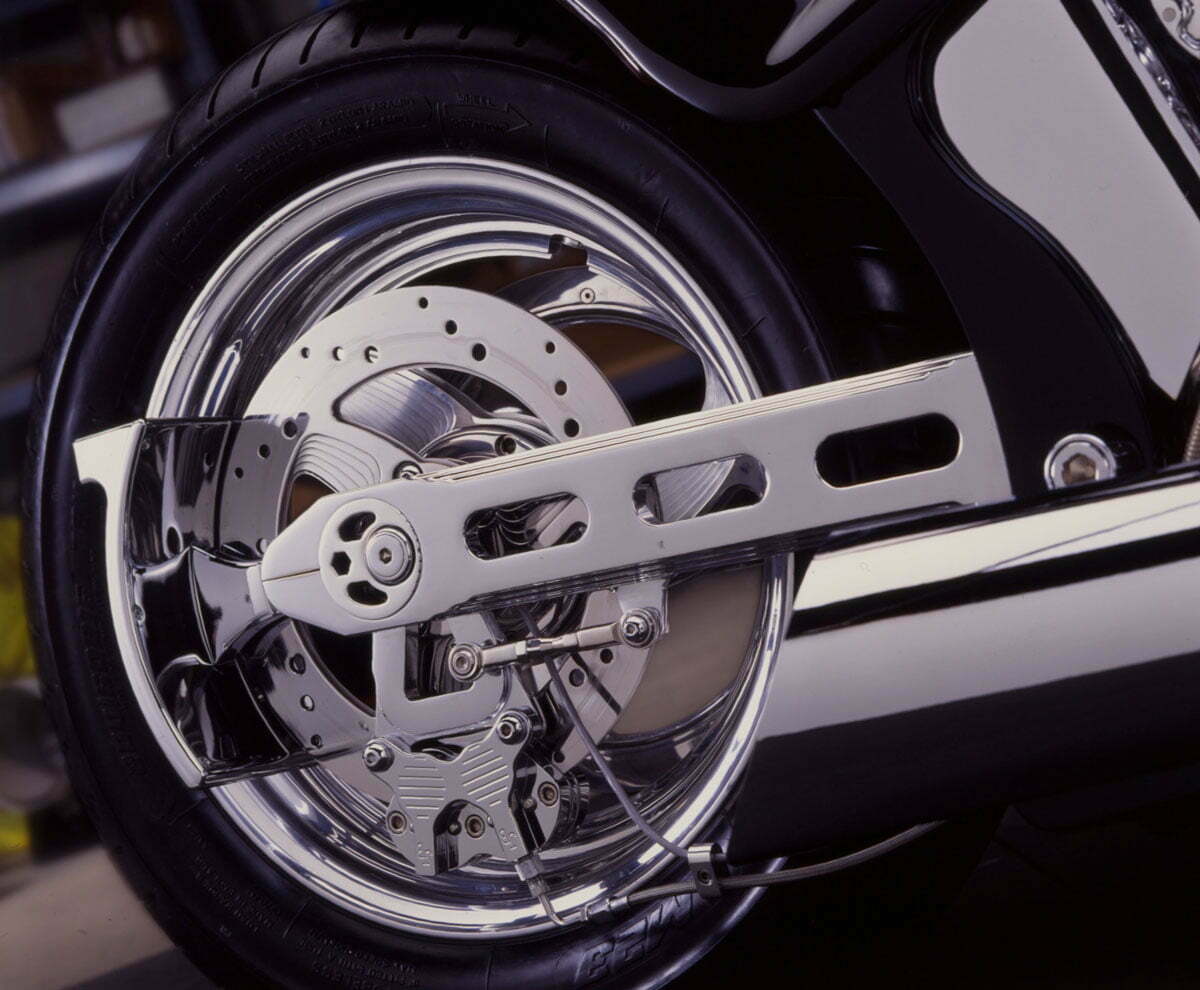 The rear wheel was built by Boyd’s Outlaw.

When building the blower drive, Ashcroft consulted with the su­percharger makers, as well as the suppliers of the fuel-injection system. The resultant drive is di­rect and simple, using a Rivera 13/4-inch-wide primary belt system but with a three-inch-wide clutch pulley; the extra inch of the clutch pulley mounts the one-inch-wide drive belt for the blower. Using the right pulley on the blower puts the drive ratio at 1:1, which is what the maker suggested, and the complete system is perfectly aligned. After the covers for the drives were mounted, you hardly know the blower is there.

The engine uses Merch cases, Sputhe barrels, heads and rockerboxes, and a Crane camshaft. The injection system is by Whitek. Ashcroft worked with the suppliers before building the engine, so they all knew what the parts would be doing, and with what other components. Displacement is 95 inches, the nominal (as in uncompressed) compression ratio is 8.5:1, and the engine puts out about 155 horsepower. Adequate, as the Rolls-Royce chaps used to say.

Ashcroft isn’t a machinist but was fortunate enough to have two friends who are good ones. He did the plans and the fabrication but had outside help with making from billet the front suspension parts, the throttle body and just about all the other aluminum pieces seen here. 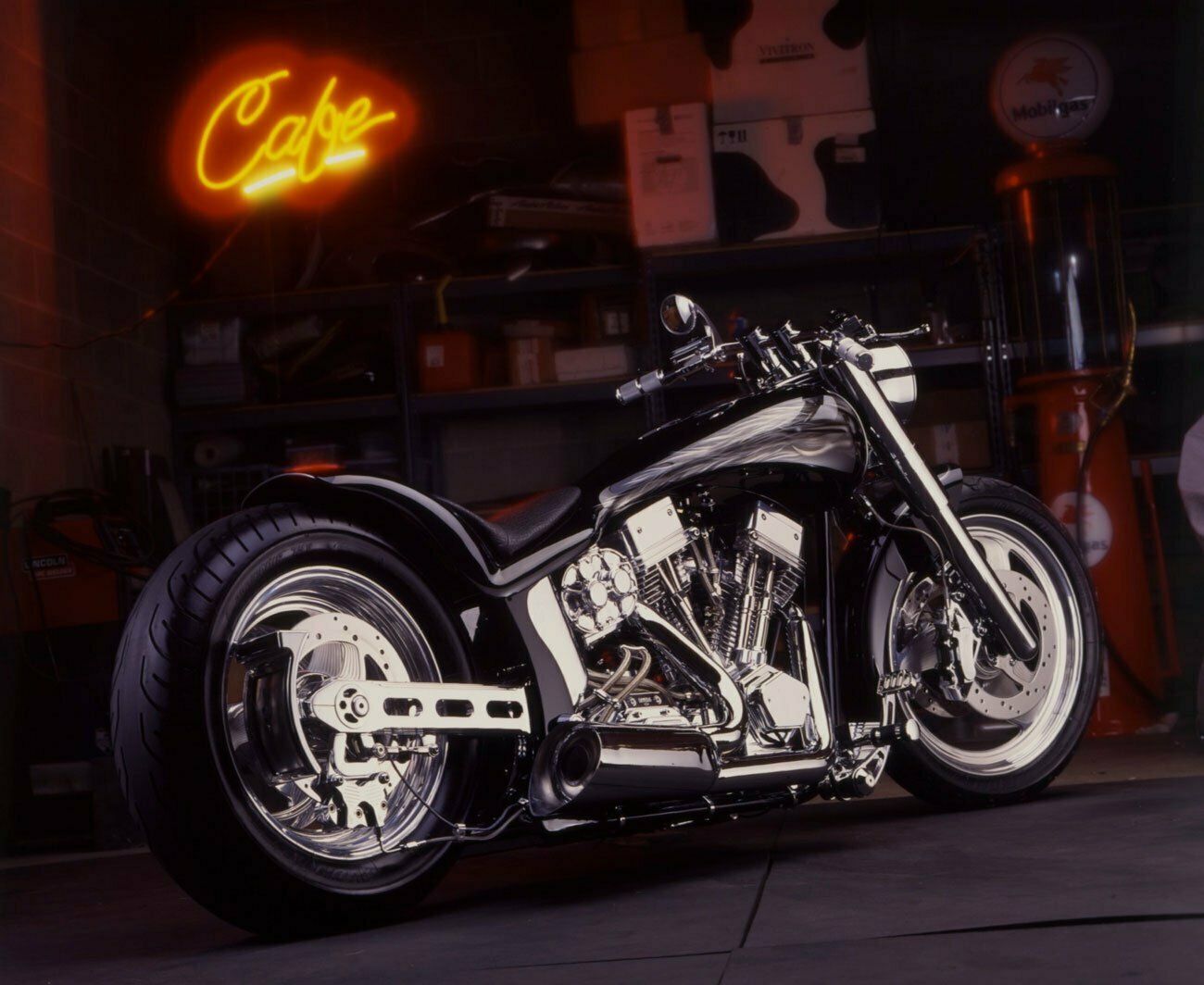 Ashcroft didn’t get mad about the beginner’s luck comment, he got even, and then some.

Fabricating the bodywork and the front fender took several tries. The builder cut and shaped, using the designer’s plans as a guide. The body panels didn’t look quite the way the sketches did, so he tried again. And again. Until they came out right. The tank cover houses the fuel tank and the oil tank, with the electronics inside what looks like an oil tank behind the engine. And yes, oil lines do run back there to that faux tank—an inside joke, you could say.

Boyd’s supplied the Outlaw wheels and brake rotors. The front brakes are dual discs, each grabbed by six-piston calipers, and the rear disc brake has four pistons. The tires are from Avon, a massive 200/60-16 out back, a 110/90-19 in front.

The frame’s two-inch stretch and 38-degree rake kick the wheelbase out to 68 or so inches. Ashcroft says he took a bunch of stuff off when he put the blower on, so the completed project weighs only about 550 pounds. That’s Sportster territory, but with two times Sportster power.

So, in the end, then, Lynn Ashcroft didn’t get mad about that beginner’s luck remark; instead, he came out way ahead of even.

5 Things We Like About The New Arai DT-X Helmet