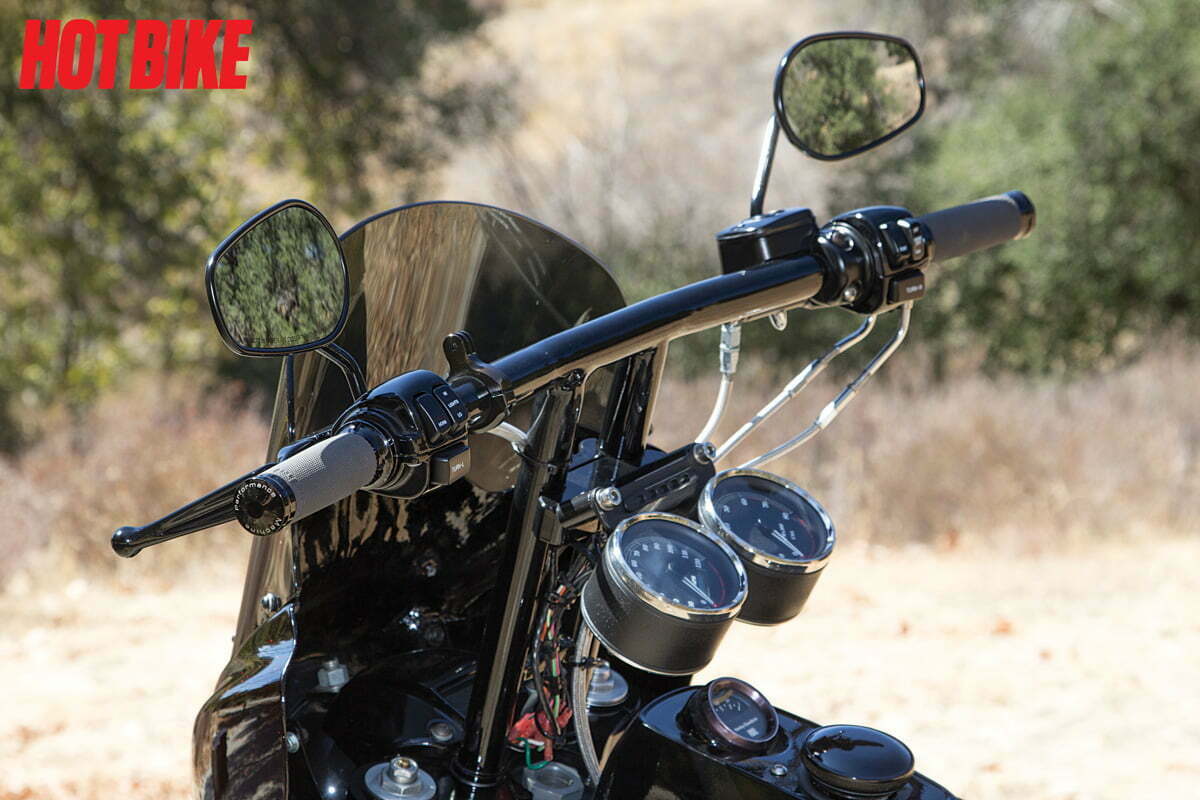 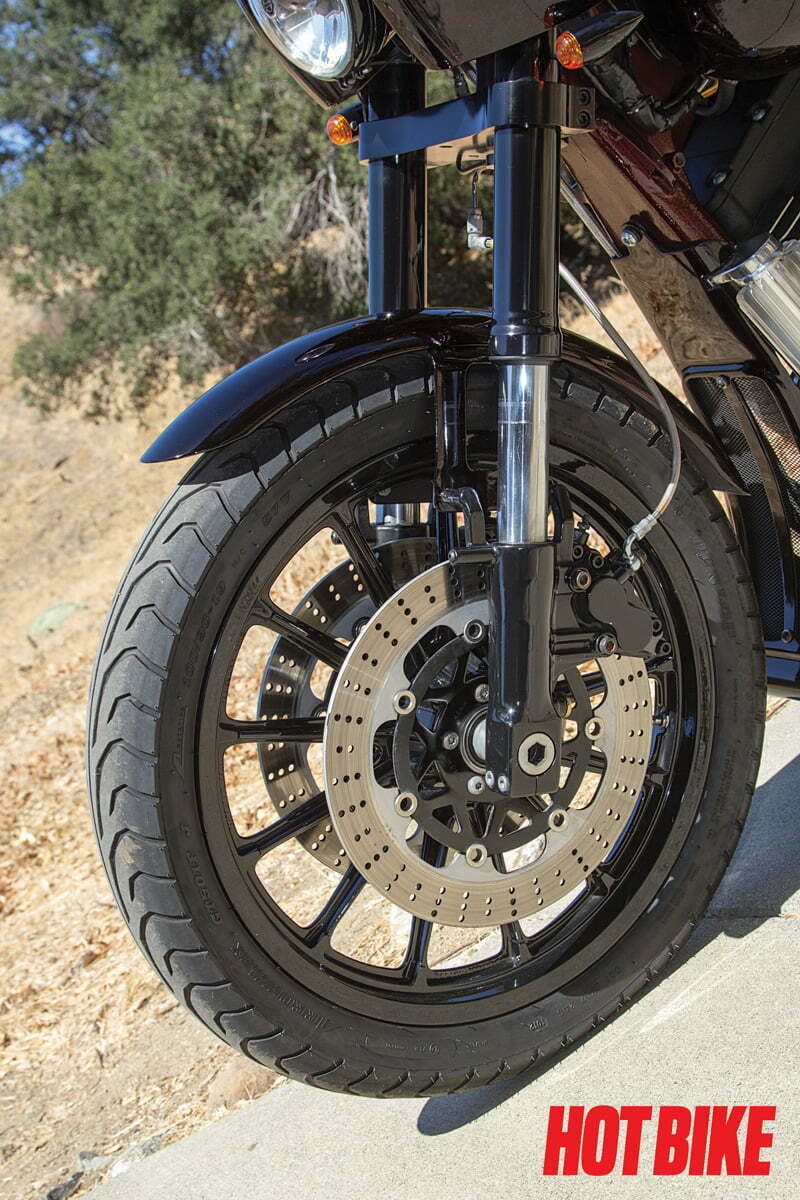 All I can say is this bike earned a few nicknames along the build process and late nights at the shop. “Bike from Hell,” and “Nightmare,” John Conely and I would both call out throughout the entire build.
In the summer of 2012, John and I just got done with a face-lift on my ’93 Softail. I took one of John’s FXRs for a spin in the afternoon. Not a stock FXR but one with a built motor—Axtell to be exact. It was badass and fast, and I was hooked! I knew then I wanted my next bike to be an FXR.

I knew I didn’t want a complete FXR. John had a ’99 bagger Twin Cam motor in the shop, bone stock, with low hours, and wanted to build it for this bike. John also mentioned that he had most of the parts needed in hand to build a fast Twin Cam.

After a couple months of searching, I found a roller for sale. The bike sat in the garage, as we had our hands full growing Conely’s Accessories and John had a couple of complete builds to finish in his shop. I decided to go with a red vein powdercoated frame and components and black wrinkle and black gloss powdercoated/anodized parts. For paint, I wanted the bike to look black in the shade but spark red candy in direct light.

I wanted the bike to look black in the shade but spark red candy in direct light.

I selected a black base with a micro flake, sealed in a red candy. I decided the tank should remain pinstriped to keep the traditional and original FXR look. I wanted a monoshock system that could handle in the rear, eliminating the ass-end wobbles in corners at speed.

I wanted a monoshock system that could handle in the rear, eliminating the ass-end wobbles in corners at speed.

John was way into building it. We started out with an alloy swingarm that appeared to be oversize for the bike at first glance. It had to be modified, cut, and re-welded to fit the application. We added machined Delrin bushings with chrome-moly sleeves per Kurtis at PRD.

John welded up the frame supports and the mount for a monoshock application. He modified the frame to allow a Twin Cam motor with a bagger transmission case to fit.

He modified the frame to allow a Twin Cam motor with a bagger transmission case to fit.

In addition, he added saddlebag mounts under the extended strut rails of the frame. He also added late-model Dyna mid-control mounts, making the need for original FXR mid controls obsolete. No need to search for that damn FXR brake pedal and mid controls any longer because Dyna hardware is dime a dozen and cost effective.

With the frame, swingarm, and motor position all lining up and in place, we added the bagger transmission case, which eliminated the need for the oil tank. A battery was put in place of the oil tank. The side plates have tabs welded on the face to mount the side covers to. Trick!

Because the swingarm was longer than stock, the seat and pan would have to be custom-made from fiberglass. After I added the hardware for the seat hinge and rear mount, it was dropped off with Andy at Bar Enterprises. I selected a double-diamond-stitched seat pocket, contrast stitched in a gunfighter shape. They use NASA foam and the comfort is incredible.

I found a set of 13-spoke H-D wheels to run on the bike local for sale. John did some checking around through his resources and located the bearing we needed.

John welded up a set of clean 12-inch T-bars that pull back and feel just right. We designed a gauge mount to sit in front of the bars and remain visible for the operator.

John then began on the motor build. The cases were polished, and the heads were ported, polished, decked, CC’d, and cut to match 20-degree pistons made by JE. He welded the crank and installed a JIMS Timken bearing to the case. He bored and honed the cylinders to fit the fresh set of custom-made JE pistons, added Mackie 598G cams to the motor, S&S gear drives, Delkron cam plate, Fueling HP tappets, Sifton adjustable pushrods, Sifton oil pump, Vulcan billet alloy rocker cages, S&S rolling rockers, Jagg 4600 Hi Flo oil filter, billet alloy machined oil cooler, S&S intake manifold, and an S&S Super G carb. The motor was built at 11:1 compression and runs on 91 pump gas. Conely had a Baker six-speed gearset that he decided to install yet used the H-D OEM trapdoor that keeps the stock transmission look.

The pipe was custom-made by Conely to mount to the original FXR frame rubber mount for the exhaust. I picked up some Titanium heat wrap to finish it off.

John added a Conely’s inverted front end to the FXR

John added a Conely’s inverted front end to the FXR with black anodized polished tubes, billet alloy triple trees, oversize brake rotors, and four-piston calipers. Now it has incredible braking power, comparable to today’s sportbike. The look matches the performance. Finally, it was all wired up and ready to go with Thunderheart’s ignition system for a Twin Cam. Soon the motor would be fired up for the first time. When John ran the heat cycles, it sounded mean and nasty!

Drew at Fire Breathing Industries ran it on the dyno after it had a few miles on it and turned 109/109 on the third pass. As Drew says, the bike has potential to be “violent.”

The Stringer brothers own this raw ride, but Bill Dodge’s hands made it. Michael Lichter Photography This 1956 Panhead custom […]