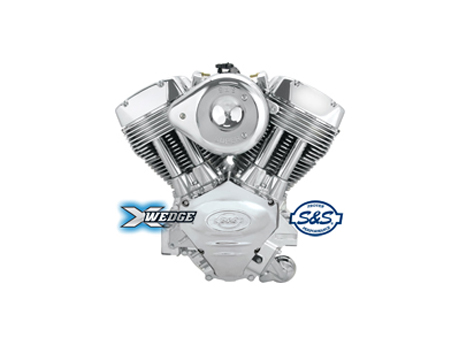 HILLIARD, Ohio (July 12, 2010) – Having gathered some of the top personnel in the world of custom motorcycles, as well as auto racing, to build a one-of-a-kind bike to benefit the families and veterans of the U.S. Navy, the people from Steel Anchor, Darwin Motorcycles and Rahal Letterman Racing had all the ideas they needed for the project – but they lacked a world-class platform to start building on.

Needing a top-of-the-line V-Twin engine and frame, the team naturally set its sights on fabled S&S; Cycle, and the Viola, Wisconsin-based company was more than eager to help. S&S; Cycle, which has been in the business of building custom aftermarket performance parts for the V-Twin industry for more than 50 years, is supplying its proprietary, technologically advanced X-Wedge motor and a muscle frame designed for it to the project.

“S&S; Cycle is excited to be invited to team with Steel Anchor, Rahal Letterman Racing and Darwin Motorcycles on this important project” said Gary Wenzel, Director of Sales and Marketing for S&S; Cycle. “S&S; is proud to support our men and women in uniform, they represent the most powerful military force on the planet so it’s only right that we provide our powerful X-Wedge engine for this charity build”.

The engine and frame from S&S; Cycle are the primary building blocks of a custom motorcycle that will be designed and constructed by famed builder Dar Holdsworth, who is the founder of Darwin Motorcycles – known throughout the country for its line of successful Brass Balls Bobbers custom bikes. The company’s custom-production 69 Chopper has been selected by American Iron Magazine as the 2011 Official Bike of Daytona Bike Week.

“When I think performance, I think S&S;, pure and simple,” Holdsworth said. “Their heritage is about performance and perfection. Their American designed X-Wedge motor exemplifies that. I use S&S; motors in the bikes we build for customers and have one in my own personal bike. I could not be happier that S&S; came on board with this special project. They are the best!”

The bike, which will be designed in association with Rahal Letterman Racing to celebrate the racing accomplishments of team co-owner Bobby Rahal, was the brainchild of Steel Anchor co-founder Vic Perz, who developed Steel Anchor as a way to raise awareness and funds for the families of U.S. Navy veterans.

“Hearing words like Post Traumatic Stress Disorder or Traumatic Brain Injury create a somber feeling when they are spoken,” tells Perz. “S&S; Cycle understands that too many of our brave men and women are coming home only to find themselves struggling to re enter society or worse. When we brought this project to their attention they were adamant about being a partner. S&S; Cycle is a true American company with a heart that bleeds Red, White and Blue.”

Upon its completion, slated tentatively for the end of the year, the custom motorcycle will travel to various shows and conventions around the country to raise support for the Steel Anchor charity, with the bike being awarded to a lucky winner in 2011.

By now, you know 2017 Daytona Bikeweek starts March 10th. What you may not know is that Street Chopper will […]