If you’ve been to the Buffalo Chip during the Sturgis Rally, you know it’s the premier location for spotting sexy cycles. Whether you’re into big wheels, glistening chrome, screaming exhaust, or smokin’ hot paint, there’s always plenty of eye candy on display or rolling on by. This year guests experienced five full days of the world’s most beautiful bikes with at the CrossRoads. Feast your eyes on this irresistible lineup of custom bikes that took home titles and wowed crowds during the 2014 Sturgis Rally:

Custom bikes of all kinds rolled in to the CrossRoads on Tuesday, Aug. 5. Onlookers drooled over all the bikes, but this one took the cake:

On Sunday, Aug. 3, the baddest baggers of Sturgis gathered at the CrossRoads to battle for $5,000, prizes and the title of “World’s Best Bagger.” The judges agreed this bad boy deserved the prize: 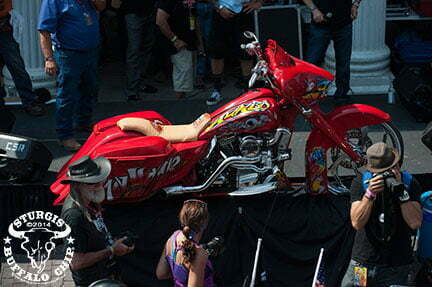 Crowds gathered around this fully customized 2014 Harley-Davidson® Street Glide on Monday, Aug. 4 to watch bidders battle it out during the annual Legends Ride auction:

Stretched frames, long front ends and extended forks filled the CrossRoads on Monday, Aug. 4 for a Sturgis bike show dedicated to builders who love to strip ‘em down. But only one chopper would reign supreme:

Chip fans and motorcycle enthusiasts spent months scoping out and voting for custom bikes in the Chip’s first ever online to onsite Sturgis bike show. Crowds then gathered on Tuesday, Aug. 5 to see the bikes in person at the CrossRoads. After judges deliberated, this bike was voted Top Builder for the Adventure Power Class:

Want to win a custom bike and guitar during the 75th anniversary of the Sturgis Rally? Sign up here: www.buffalochip.com/EVENTS/Contests/2014-Sturgis-Rider-Sweepstakes

Check out more of the Sturgis Rider News by the Sturgis Buffalo Chip here:www.buffalochip.com/NEWS-INFO/News/Sturgis-Rider-News-Blog

Neck Gaiters That Provide Protection From The Wind, Weather, Or Sun

With the variety of neck gaiters out there you can find one that best suits your personal style. Amazon Open-face […]

It’s like the Westminster Dog Show, only cool and not creepy. Words: Mark Masker Photography: John Jackson When you make […]