Nothing is invincible. Every man and machine has a weakness, but it’s the size of the fight within that makes all the difference when it comes down to not getting your ass kicked. When a potential deathblow presents itself, you had better be ready, or else prepare to get smacked down and taken out.

Now, you might not think you’d have much to worry about with a brand-new bike. All of its components are fresh and dependable, and there aren’t usually very many curveballs to anticipate in the form of misfires or malfunctions. But accidents do happen. And when they do, you’d better be ready to roll with the punches. Nick Trask is known for his big turbos and big power, but the latest Assault build takes on a darker tone. The Assault Glide features a lengthy list of Trask’s own premium modifications including a turbo exhaust system, custom dash, 8-inch Assault risers and V-Line moto bars.

Nick Trask, of Trask Performance, has been in the business of building bikes long enough to know that it’s wise to hope for the best while expecting the worst to rear its ugly head at any time. “I would say the most challenging aspect of this particular build was having to regroup, rebuild, and deliver by the original deadline,” he says of an unfortunate occurrence that had the power to destroy the momentum of the build. Luckily, it would most likely take an act of God to derail the Trask team.

“In January of 2018, this bike was near completion when part of our facility was damaged by a fire that broke out in a neighboring business. Luckily, our crew was strong enough to step up to the challenge of building it a second time.” Since Nick founded Trask Performance back in 2000, he has molded the company into an industry leader in turbo systems for Harley-Davidson models. With that much clout comes a responsibility to never let anything that can be overcome make too big of an impact on any particular project. 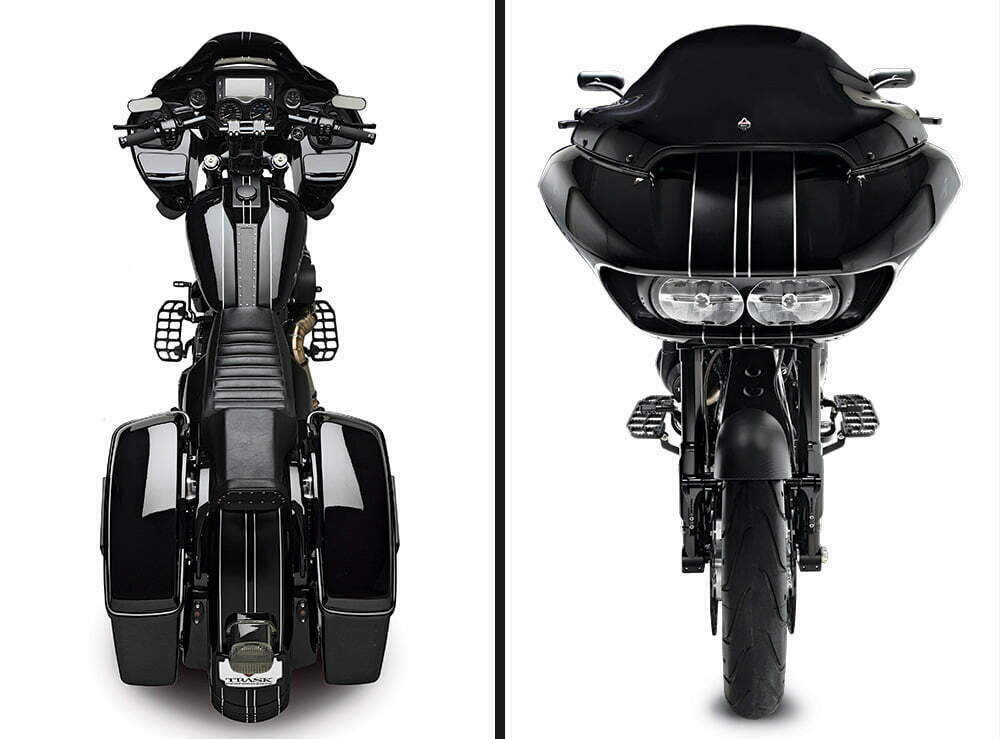 Smooth, clean lines on Trask’s custom 2018 Road Glide. Every angle of this bike is equally as impressive as the last. From tip to tail, onlookers will first see a killer combination of a Klock Werks fairing and Kraus front fender, with a lasting illumination of Custom Dynamics taillights and rear Vision X turn signals.

The bike was being built for Brent Frasier, a longtime friend and customer of Nick’s for whom the shop had previously completed several custom motorcycles. When he approached Nick to build yet another bike for him, he was anxious to find out what the new Milwaukee-Eight motor was all about, so Nick set out on a mission, which led him to a new 2018 FLTRXS, fresh from the dealership.

“The vision for the build was simple,” Nick admits. “Brent wanted a well-handling motorcycle with the necessary upgrades to meet his personal standards.” In short, all he was after was Nick’s trademark level of performance, and that’s exactly what he received. Of course, the reason customers choose Trask is for its world-renowned turbo system, which Nick was quick to elaborate on. “We stayed with our Assault style with this build, but added a new twist. This custom-built system features a V-band turbo housing, pie-cut stainless steel, mesh heat shields, and carbon-fiber muffler. All business and big-power performance.” 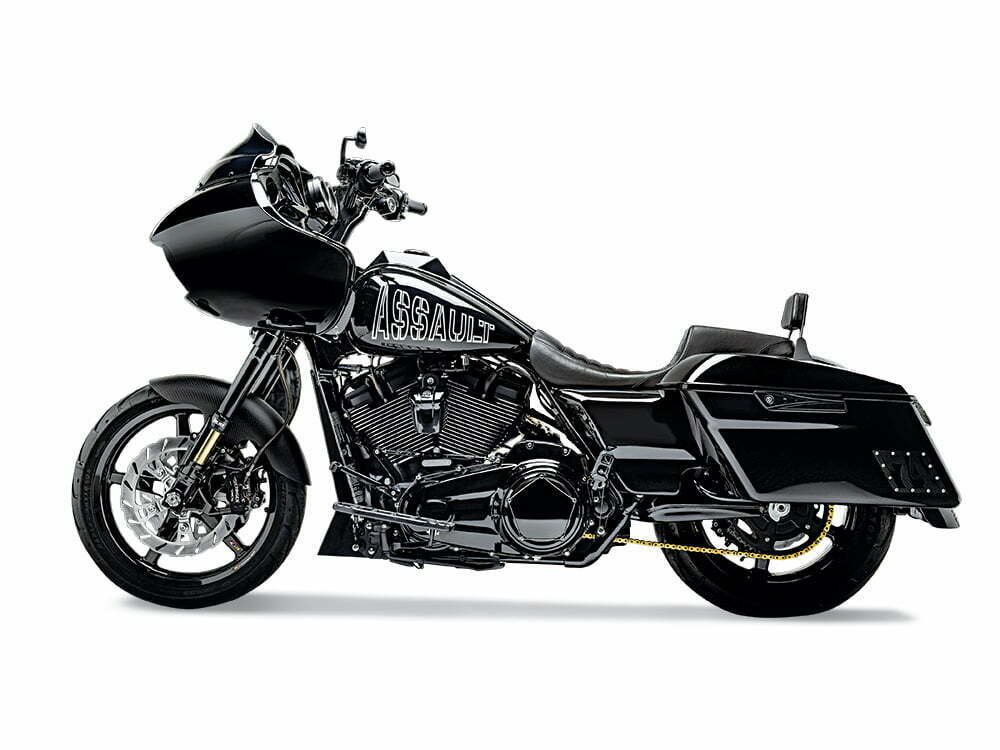 Trask’s Assault Glide, based off a 2018 H-D Road Glide. Trask also utilized its custom chain drive conversion kit into the build of the Assault Glide, allowing the belt drive system to be left in the dust.

To round out the true performance of the Road Glide, Nick and crew opted for a combination of Öhlins and Legends air suspension for a very responsive motorcycle that is an overall pleasure to ride. “Version 2.0 of this particular bike turned out to be the best-handling bike we have ever ridden,” Nick says about the final outcome of the Road Glide Special. Obviously, the man knows what he’s talking about, and with a statement like that, we’d have to estimate that Brent has been busy taking full advantage of his latest machine.

When it comes down to it, there are decisive moments that separate the average tinkerer from the seasoned veteran. It was a moment such as this when the entire Trask Performance outfit soared above all expectations in the face of adversity. Calling it quits was never in the stars—the only option was to rebuild the bike to go even faster, and to handle better than ever before.

Run a 26″ or 30″ wheel on your Harley-Davidson touring model with the Pickard USA Slip Fit Short Neck kit. […]

If you thought motorcycle gas tank painting was an artform in the USA, wait until you check out these 137-different […]