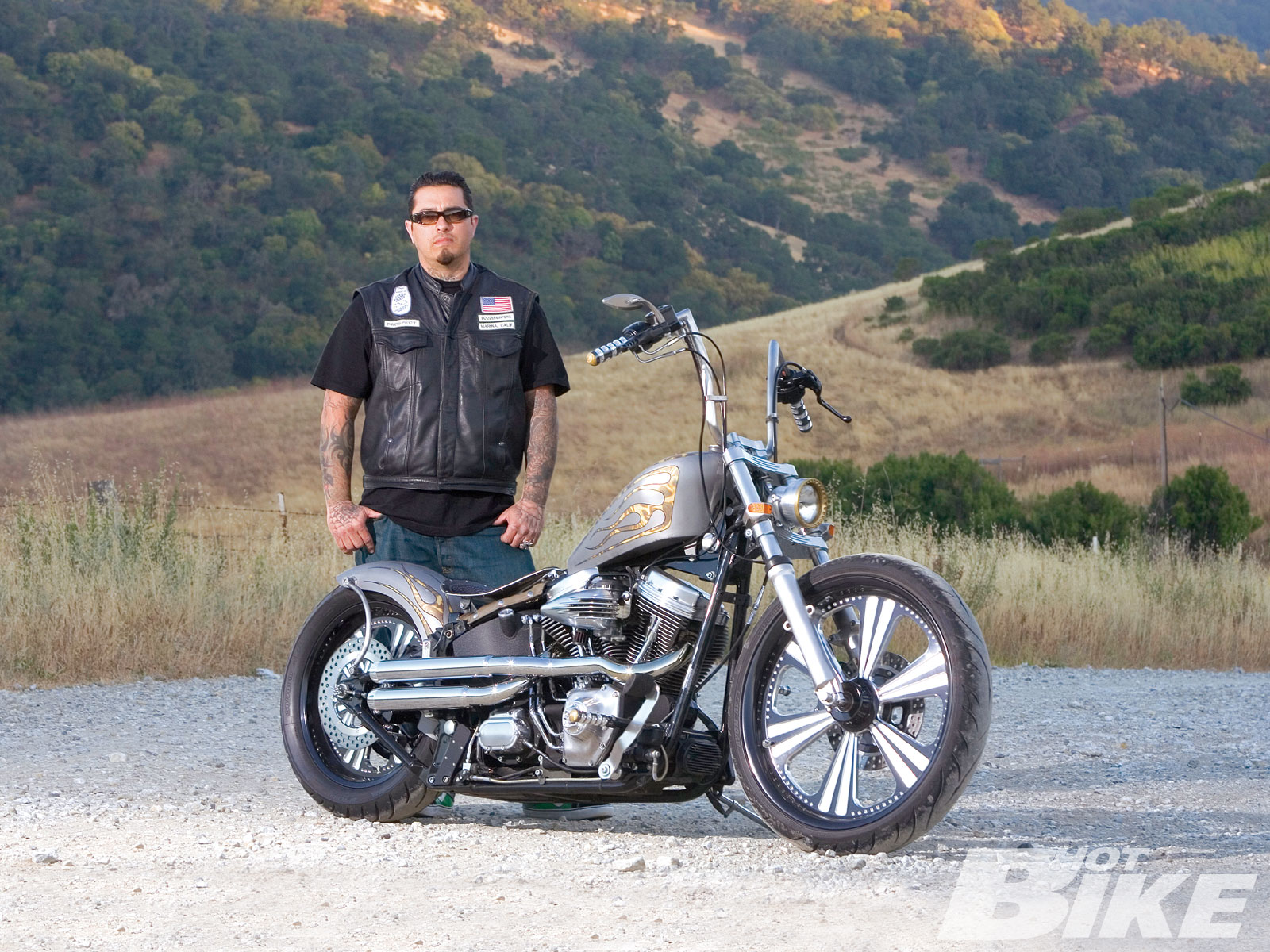 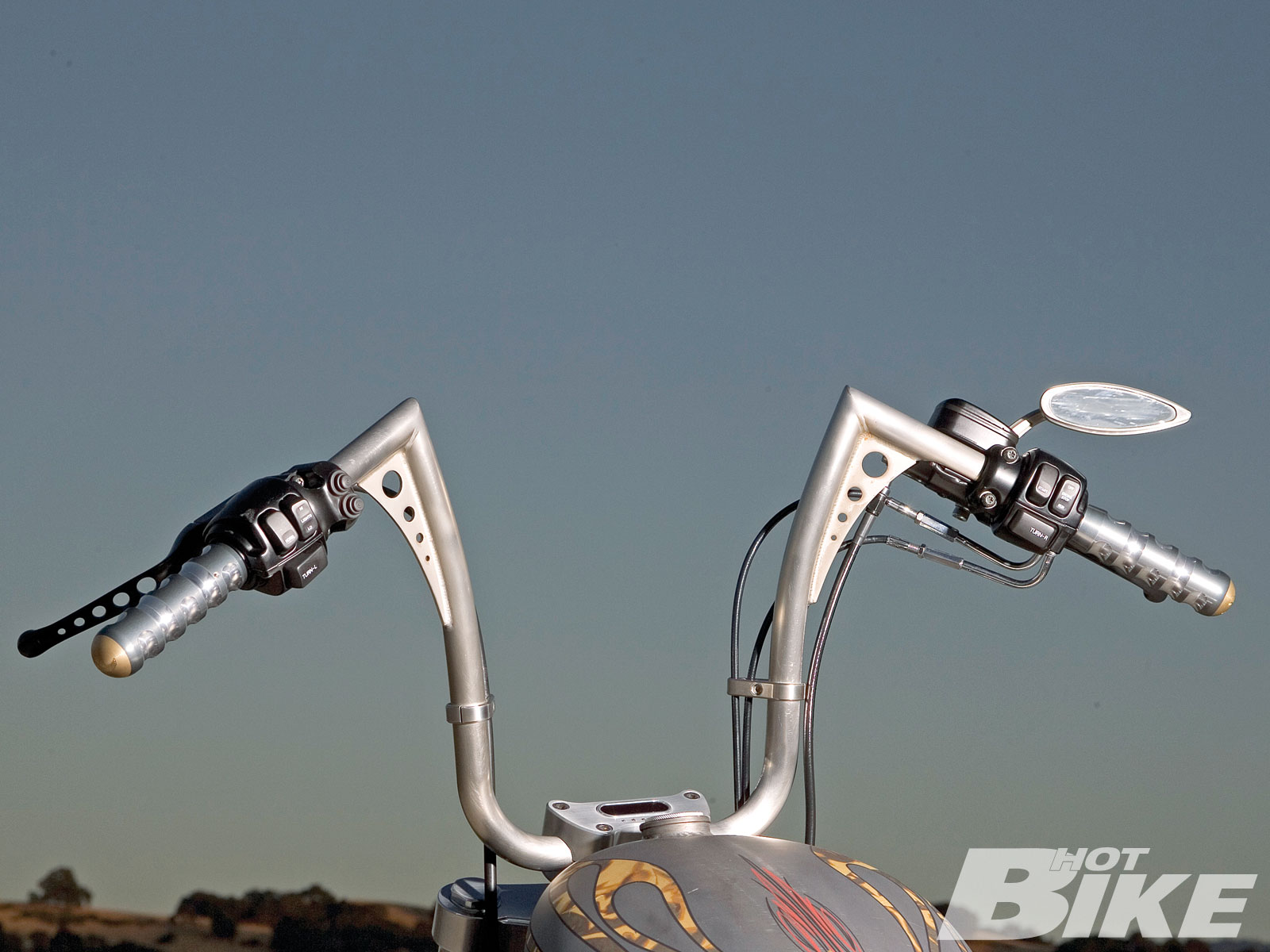 The new CCI Bonanza II bars are a modern twist, or should we say bend, on the traditional ape. 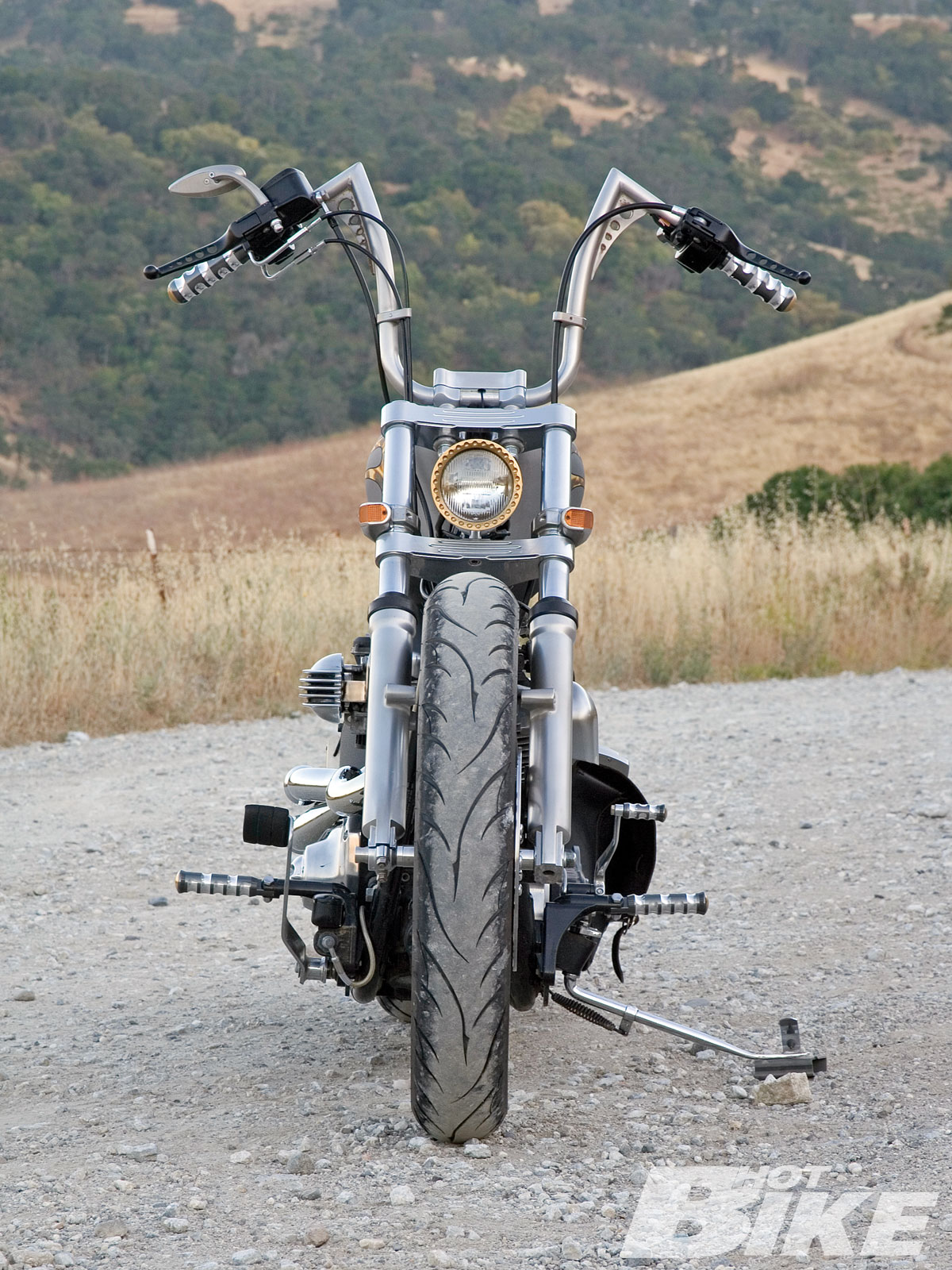 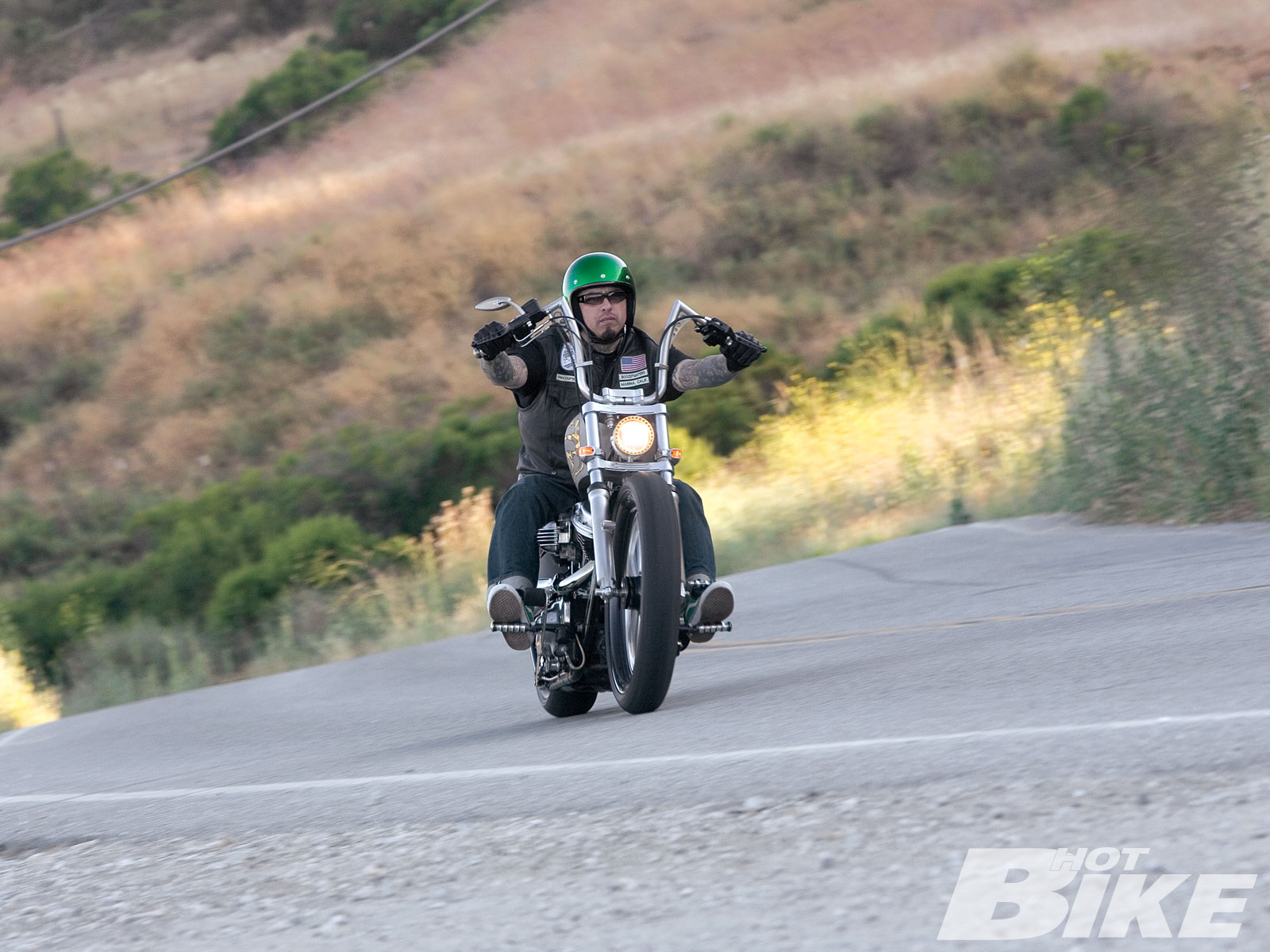 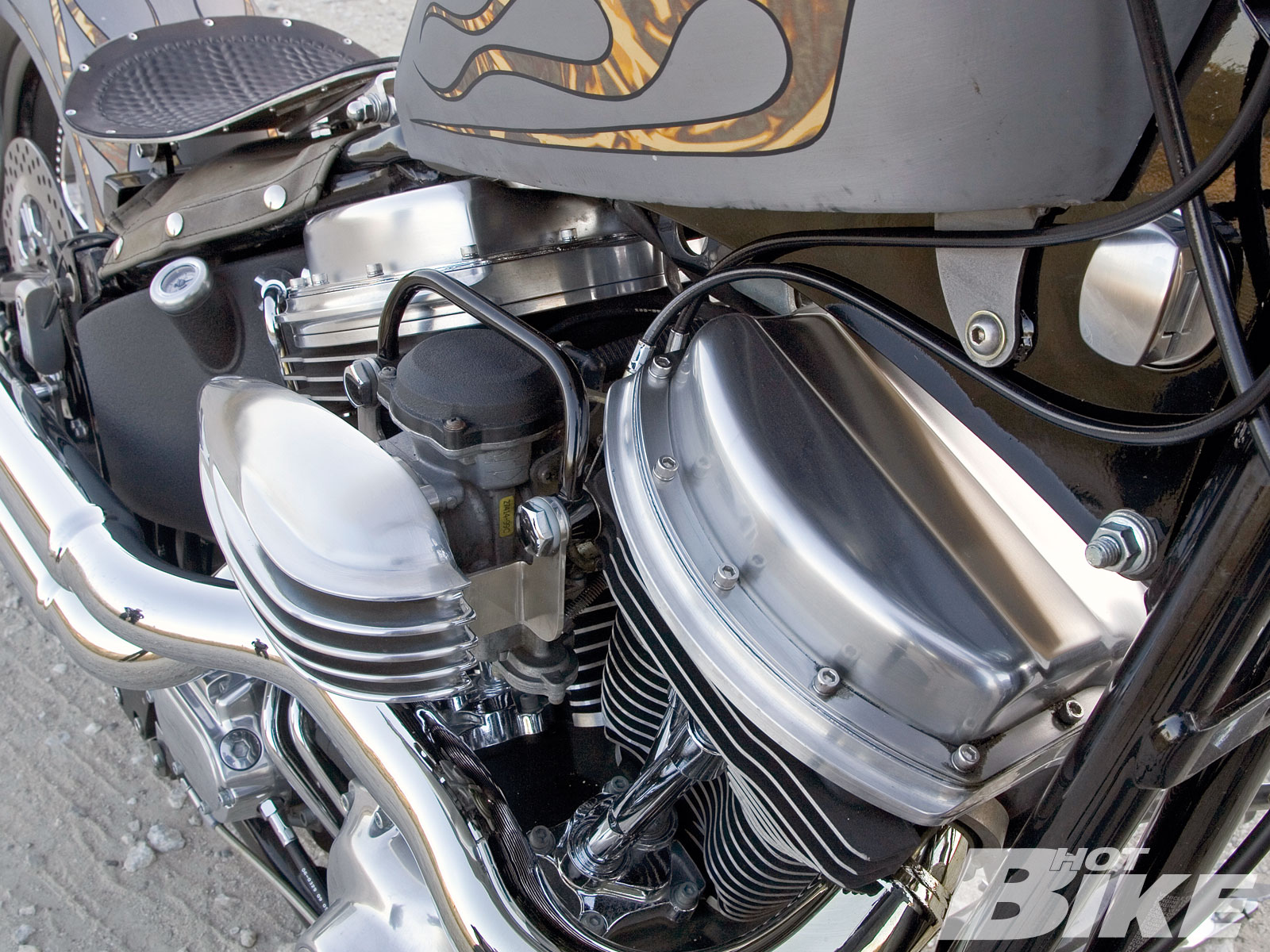 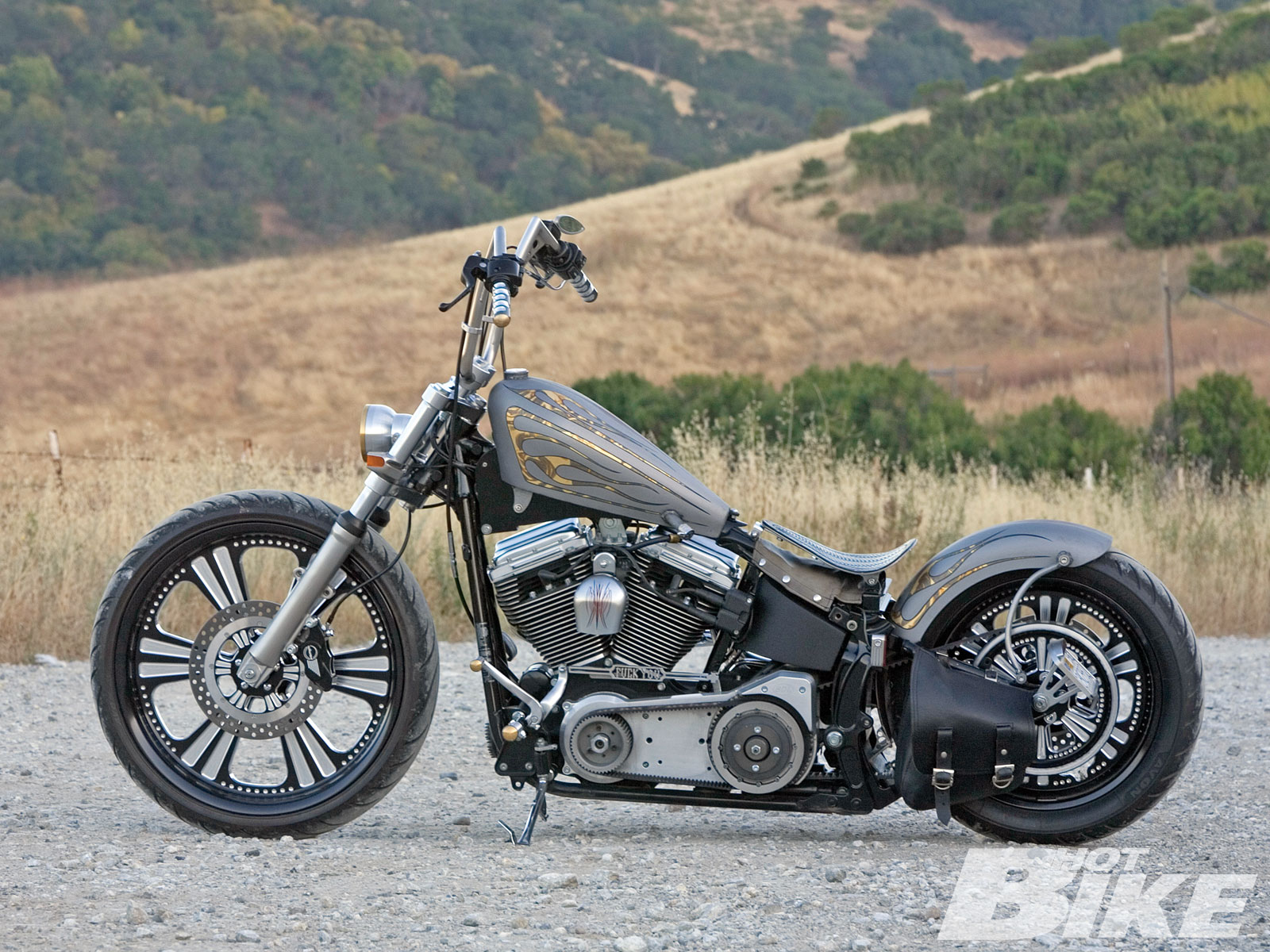 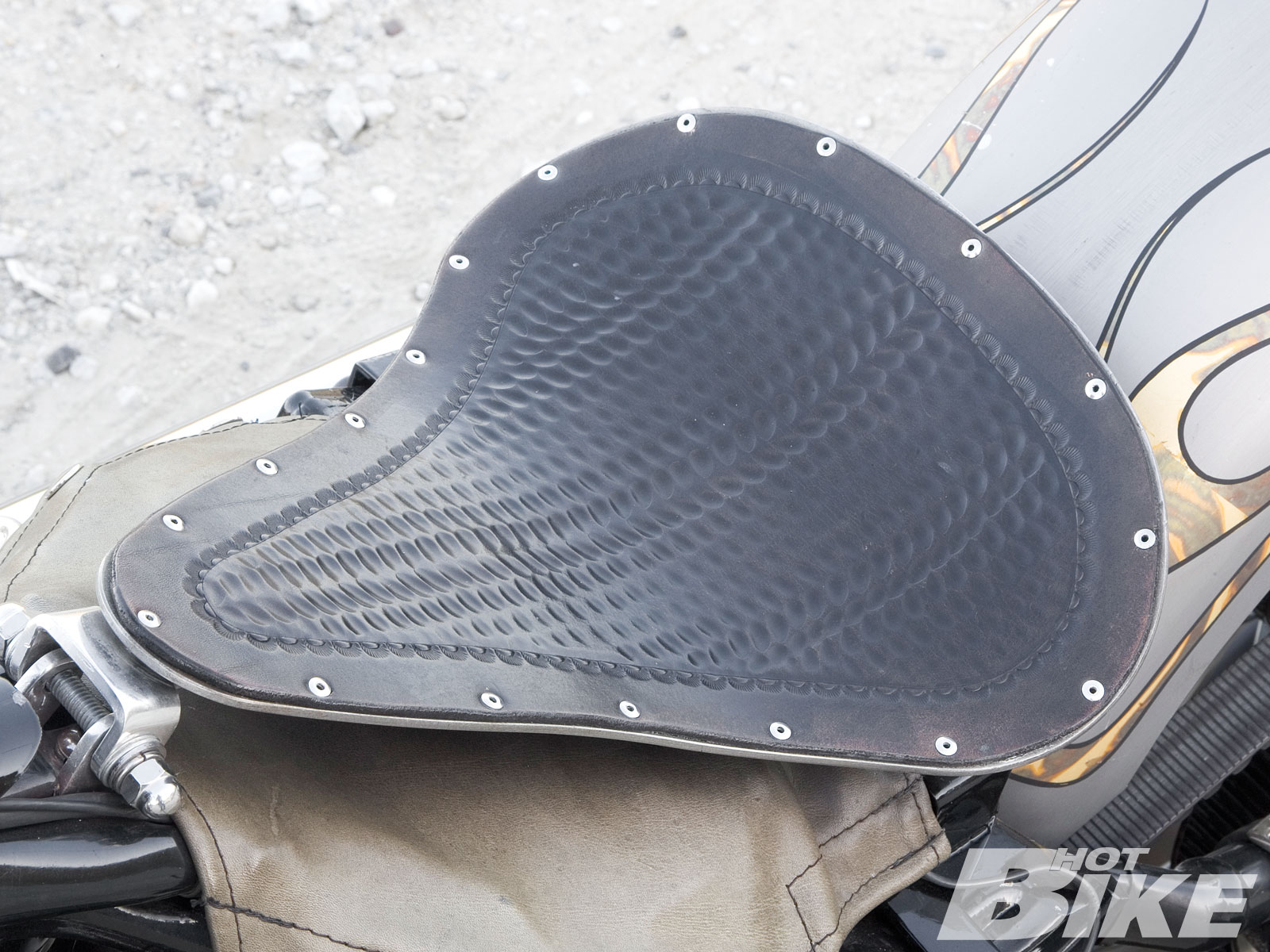 Rich and Kirk designed/fabricated the seat pan, then Obie Beaver covered the top with an alligator-pattern black leather insert. 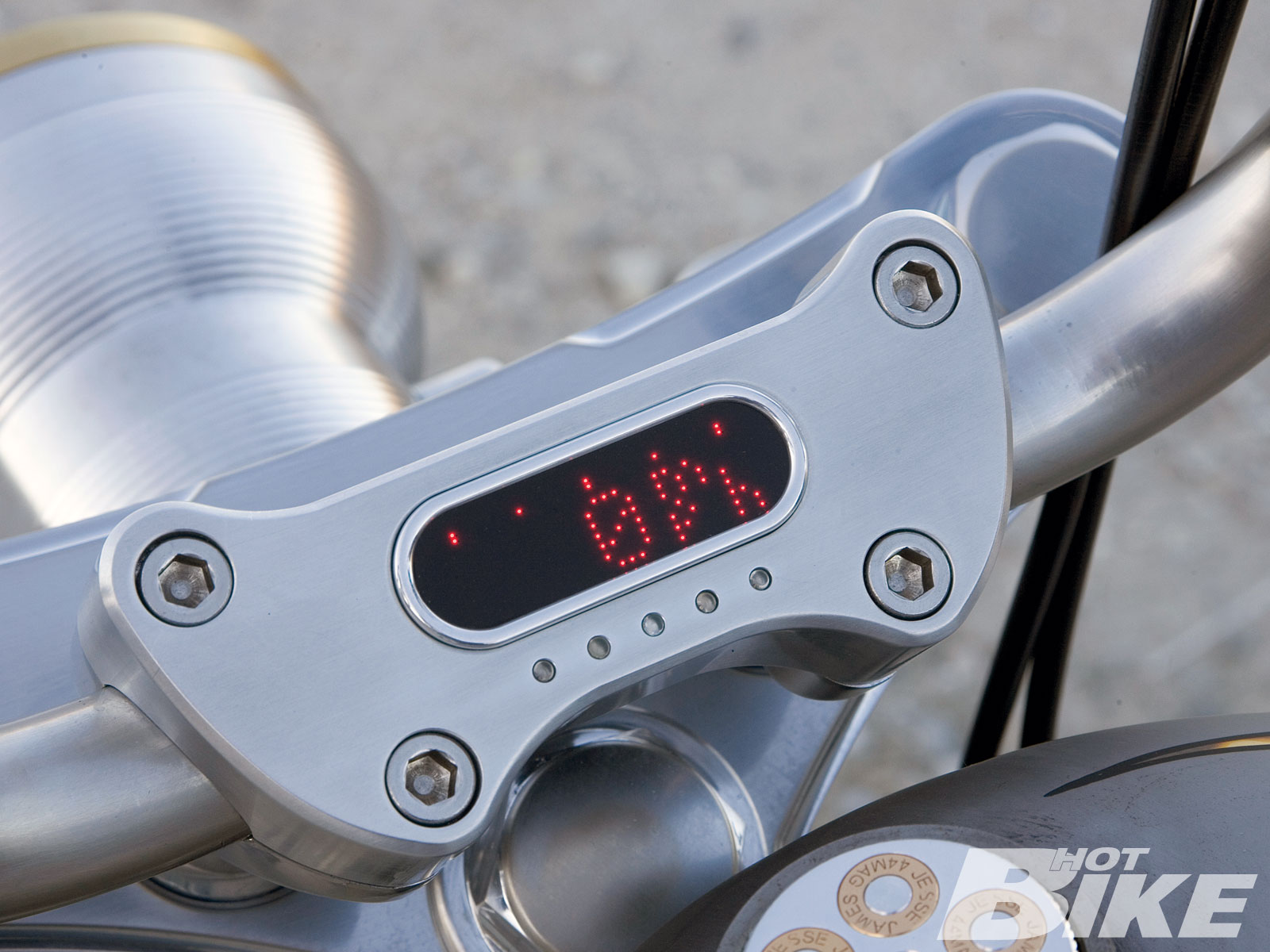 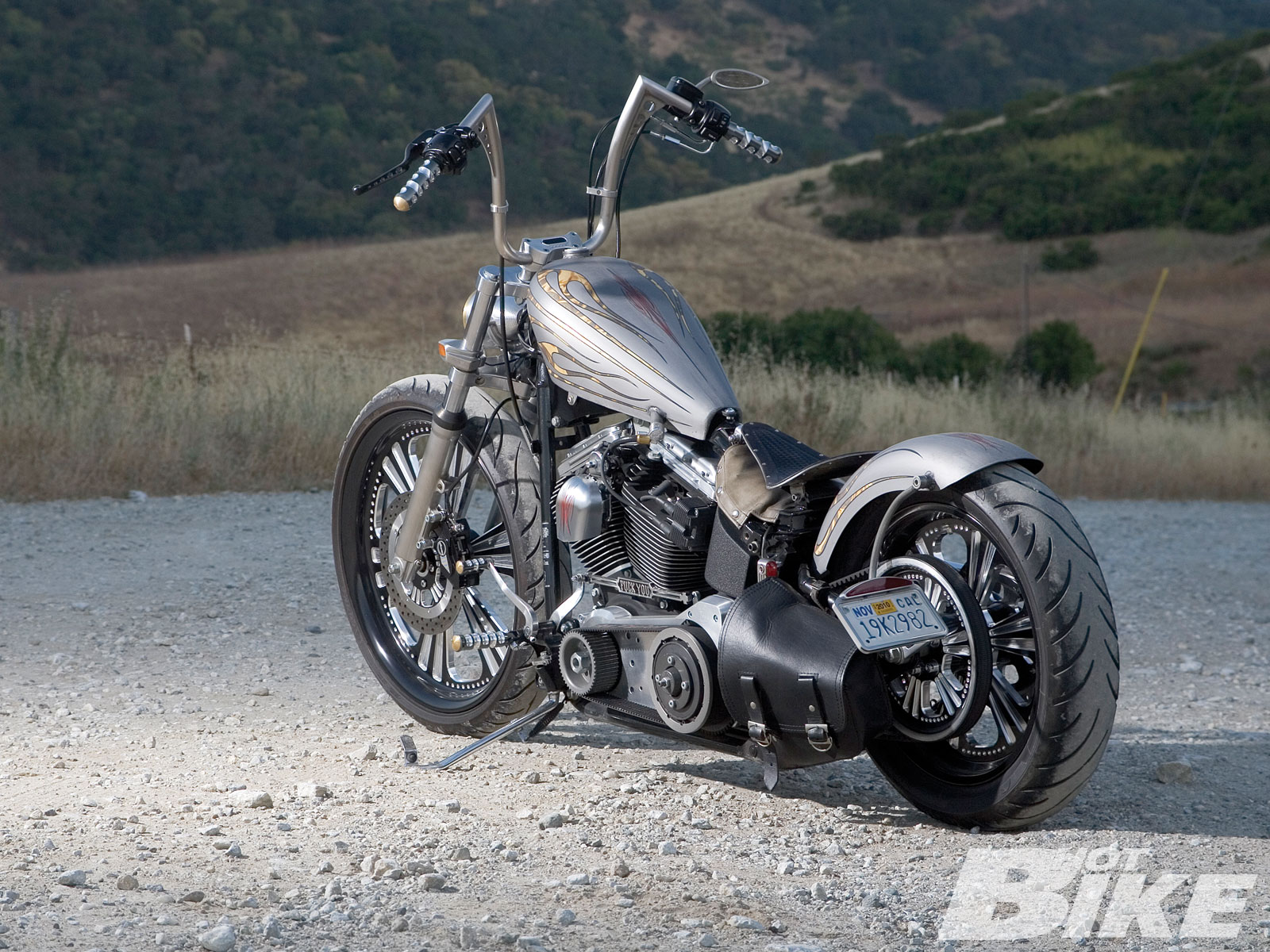 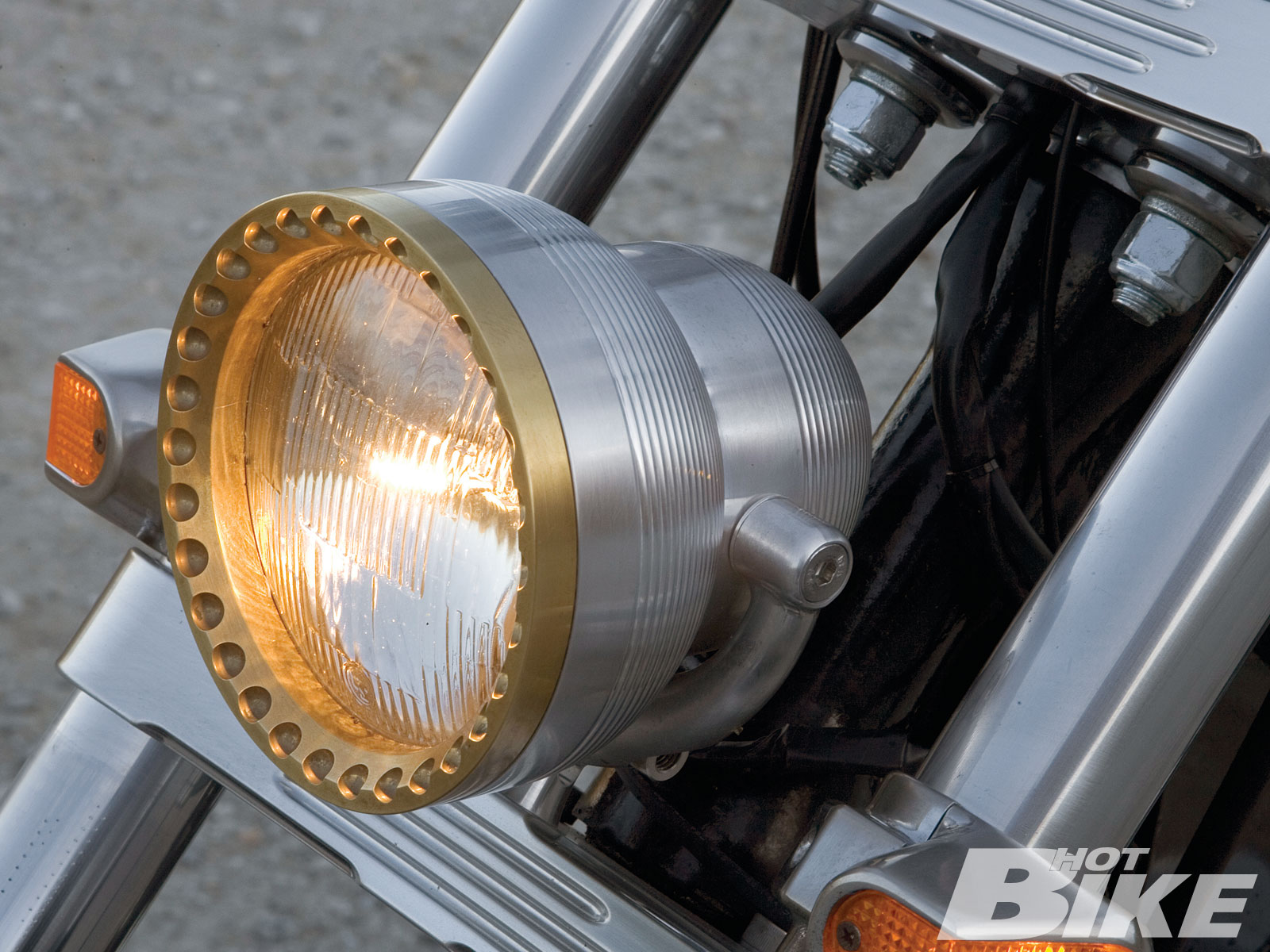 We feature bikes from part manufacturers/suppliers and bike builders all the time where the story goes, “I bought/built this bike to showcase all our new parts.” It’s quite common and is a great marketing tool to take around to rallies and bike shows. And while Rich Fulk, from northern California, is a Product Line Manager and works on new product development for Custom Chrome (CCI), his intention when he purchased this ’04 Softail was not to showcase it as a parts billboard, it just kind of happened that way after a freak accident that could have left him seriously injured or worse.

“I found the bike on Craigslist and purchased it from a guy in Santa Cruz, California, for $9,500 back in August of 2009. It was a decent deal, an almost bone-stock ’04 Softail with only 8,000 miles,” Rich stated. “I stripped the paint off and gave it a quick rat-rod-style makeover and hit the road on it as my daily rider.”

Barely three months later while riding back from an event the day after Thanksgiving, Rich hit a pothole on the freeway doing about 70. The size of the hole and the force with which he hit it sent him and the bike in the air, and when Rich and the bike hit the ground, they hit the ground with both sliding down the freeway until the bike kicked up into the air and flipped down onto the tarmac. “I broke three ribs, popped my shoulder, bruised my hip, and the beltdrive took a bite out of my left foot,” Rich commented. “A few days later, I was finally able to get out of bed and head to the garage to inspect the damage.”

Remarkably the damage wasn’t nearly as bad as expected. The front wheel, sheetmetal, bars, and exhaust took the brunt of the impact, and the frontend and frame were OK.

“As I looked the bike over I knew it was time for a re-birth (not a re-build),” Rich said. “I wanted something that had that ‘Frisco’ chopper vibe but wanted to make it as practical and rideable as possible. I didn’t want to cut the frame all up, and figured I would see just how far I could go with bolt-on parts. After I started looking to see what was available in the market, I knew I would have to build some of the parts but made sure that they would bolt directly onto the existing mounting points on the bike.”

With his experience as a new product development guy at CCI, Rich figured this would be a great R&D; project to see what kind of new bolt-on parts he could develop. Needing some fabrication help, he called his partner in crime Kirk Taylor from Custom Design Studios in Novato, California. Having worked with Kirk on several other projects, the two were quickly on the same game plan.

“Once the bike was all torn down, we started collecting parts and cutting them up and making them fit,” Rich said. “The first part at the center of the bike was the gas tank. We started with a CCI gas tank and built a new tunnel, shortened it up, added some new mounting tabs and built an adapter to mount the tank to the frame and also cover up all the exposed wiring. At the rear of the bike, we cut off the stock fender mounts and went with a CCI One Ton Ho rigid fender. We made some struts and custom brackets to mount the fender to the swingarm using the stock mounts with the exception on two bungs that had to be welded on. We then moved on to the seat and wanted to keep with the same bolt-on vibe, so we got busy bending and cutting up brackets so that we could use the stock side mounts. With the seat mounts out of the way, we started in on the seat pan and hammered one into just the right shape and at this point we stepped back and took a look at the bike and realized we were done with the fabrication work and had accomplished our goal. I then left the sheetmetal with Kirk since he is not only one hell of a fabricator, but also an accomplished painter.” Wanting to stick with the raw and gritty look and feel the bike had before it did the two wheel limbo, Rich decided to stick with a raw metal finish and have Kirk dress it up with some contrasting gold leaf graphics and pinstriping.

With the sheetmetal in capable hands, Rich hauled the bike back home to finish it off with some key components that would really help it stand apart from its old self. For a narrow lane-splitting profile, Rich picked up a set of 41mm triple trees from Joe at Vulcan Engineering. Jesse at Legends Air Ride supplied a rear air ride system to help keep Rich comfortable when on the road but give the bike that down-and-dirty stance when parked. “For the wheels I wanted to mesh an old-school feel with a new-school influence, so I went with a set of RevTech ‘Midnight’ series Dominator-6 wheels,” Rich told us. “Wanting to make the bike stand out, I decided to stuff a 23-inch front wheel into the mid-glide and went with an 18-inch out back. I followed this up with a set of matching brake rotors, pulley, and finished it off with a set of Wilwood four-piston calipers.” Instead of going with a standard top clamp on the triple trees, Rich went with a new digital speedo top clamp from MotoGadget. Cycle Kraft provided the headlight, grips, pegs, and exhaust, and then Rich finished the bike off with a trip through the 2010 CCI catalog for the remaining parts needed to finish the project.

“Once Kirk was done with the paint work, I could see the finish line and was putting in some late nights to get the bike finished and back on the road,” Rich stated. “The following weekend, the bike was completed and ready to roll off the lift to fire up. I pulled the bike out the garage and hit the switch and took the first tes tride. The bike rode great and looked even better! Wherever I take the bike people have a hard time believing that it was a stock H-D, and when I show them how everything bolts-on, they don’t believe it.”

As was stated at the beginning, Rich didn’t plan on making this into a new product display bike, but in the process of the build, CCI decided to put the gas tank, rear fender, and seat kit into production. So far the thinking is that CCI will offer the kit as a complete package for about $1,200, or you could buy the fender, tank, and seat kits individually. In total Rich says he’s got about $6,000 to $7,000 in parts into the bike. So basically for about $17,000, he was able to turn a stock sleeper into custom eye-catcher on a reasonable budget with mostly bolt-on parts-proof that you don’t have to spend 25 Gs to have a cool, reliable, and rideable bike.

In this Tales From The Dyno Episode, we install Bassani Road Rage Exhaust and run it on the dyno to […]

Inside the RevTech Four-Speed Transmission | At A Glance

Looking for a replacement for your old Pan or Shovelhead’s tranny? RevTech makes complete transmissions for ’36-64 Big Twins with […]