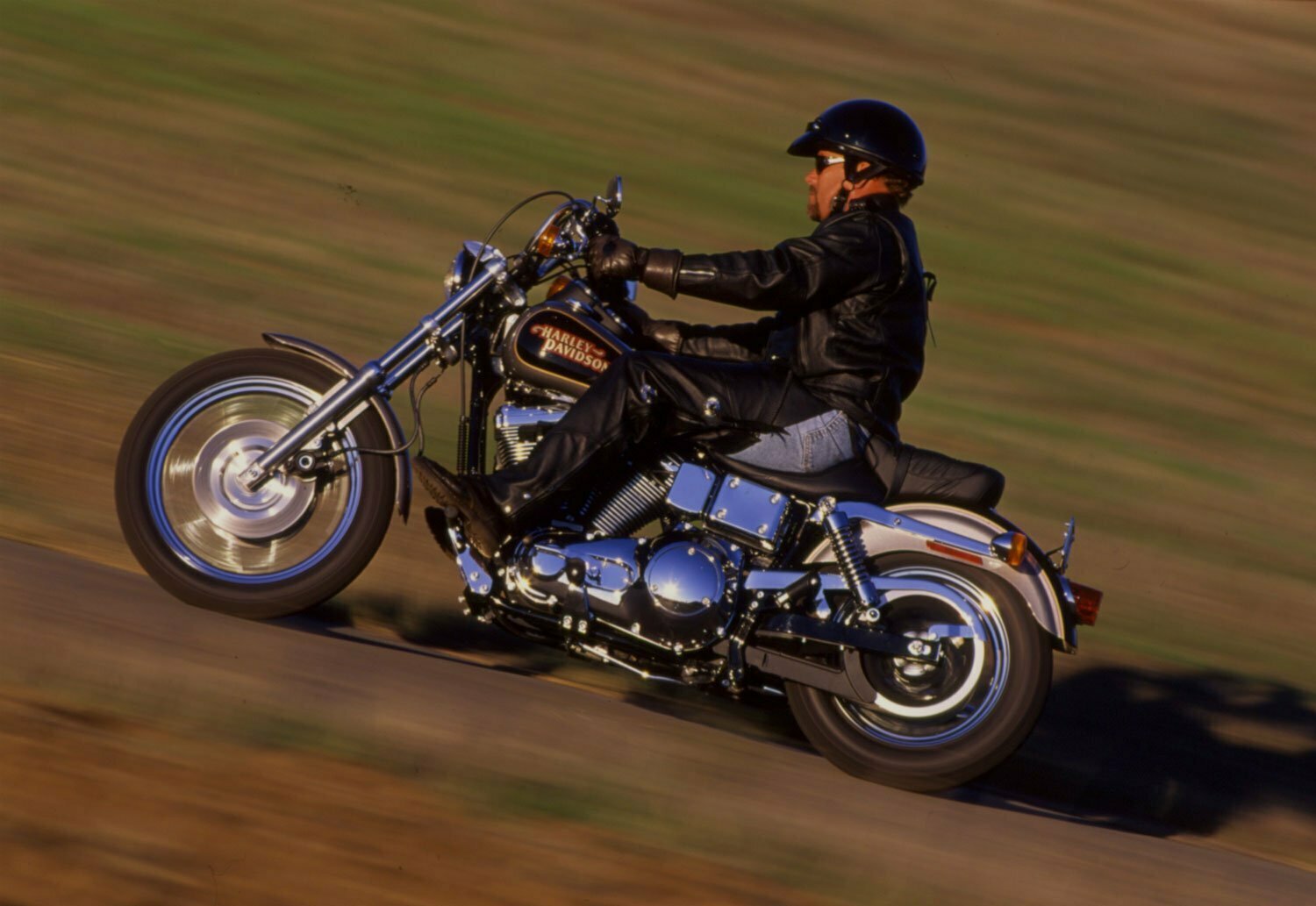 The smoothness of the Low Rider is much appreciated when you hit 75 mph.

This article was originally published in the April-May 1997 issue of Cycle World’s Big Twin magazine.

Slick. Not a word often used to describe a new-model Harley-Davidson. But when the late Cycle magazine tested the very first Dyna-chassised model—the 1991 Sturgis—its editors took Rob Morrison, ex-National dirt-tracker and Softail owner, along for the ride. And after three days and more than a thousand miles on the road, Morrison concluded: “It may be too slick for my Softail-riding buddies. It’s the businessman’s Harley.”

Ride the new ’97 Dyna Low Rider, and you’ll likely agree: The FXDL is slick. Slide the barrel-shaped key into the invisible, underseat ignition, push the starter button on the switch assembly recently rendered compact and curvaceous, and the Low Rider rumps to life with a controlled “putter-hiss-putter”; there’s certainly no thunder with the stock muf­flers and air filter in place. At a fast idle, the Low Rider shakes a little, but less than the FXR or any of the current rubber-mounted dressers. Click— no, not clunk—the gear­­box into first, let out the smooth-acting clutch, and you can ride away with just a few seconds of engine warming.

There is a little buzz­ing in the handlebar and seat under 2500 rpm, but as you glide through the gears, the electricity diminishes the faster you go. At freeway speeds and beyond, the Low Rider is about as vibrationless as any machine powered by a Milwaukee Big Twin can be.

The Dyna comes by its slickness as naturally as does Arkansas’ gift to womanhood. When it was introduced back in the early Nineties, the Dyna was destined as an eventual replacement for the FXR, Harley’s do-everything custom. And let’s not forget when the FXR was de­signed: right at the end of that horrible era when Harleys were in plentiful supply on dealership floors everywhere, when waiting lists were as unthinkable as charging rent for the Lincoln Bedroom, when The Motor Company was routinely getting pum­meled in the mainstream motor­cycle press for building machines that were too slow, too unreliable, too poor-handling, and that simply shuddered and shook too much.

The FXR was de­signed to change those impressions, to reach out to motorcyclists beyond the hard core of the Harley faithful. It adapted the rubber-mounting of the FLT and—breaking away from the rigid-mount, four-speed chassis design and its single seat post—wrapped a girder-strong frame around the outside of the machine, more like that of a Norton or a Triumph or the Japanese bikes that copied them.

After the FXR, Harley no longer had to hear about poor-handling motorcycles or ones that vibrated excessively. And soon thereafter, with the introduction of the Evolution engine, the big reliability issues were dealt with, as well. All of this put The Motor Company on the road to the current stockholder Nirvana. 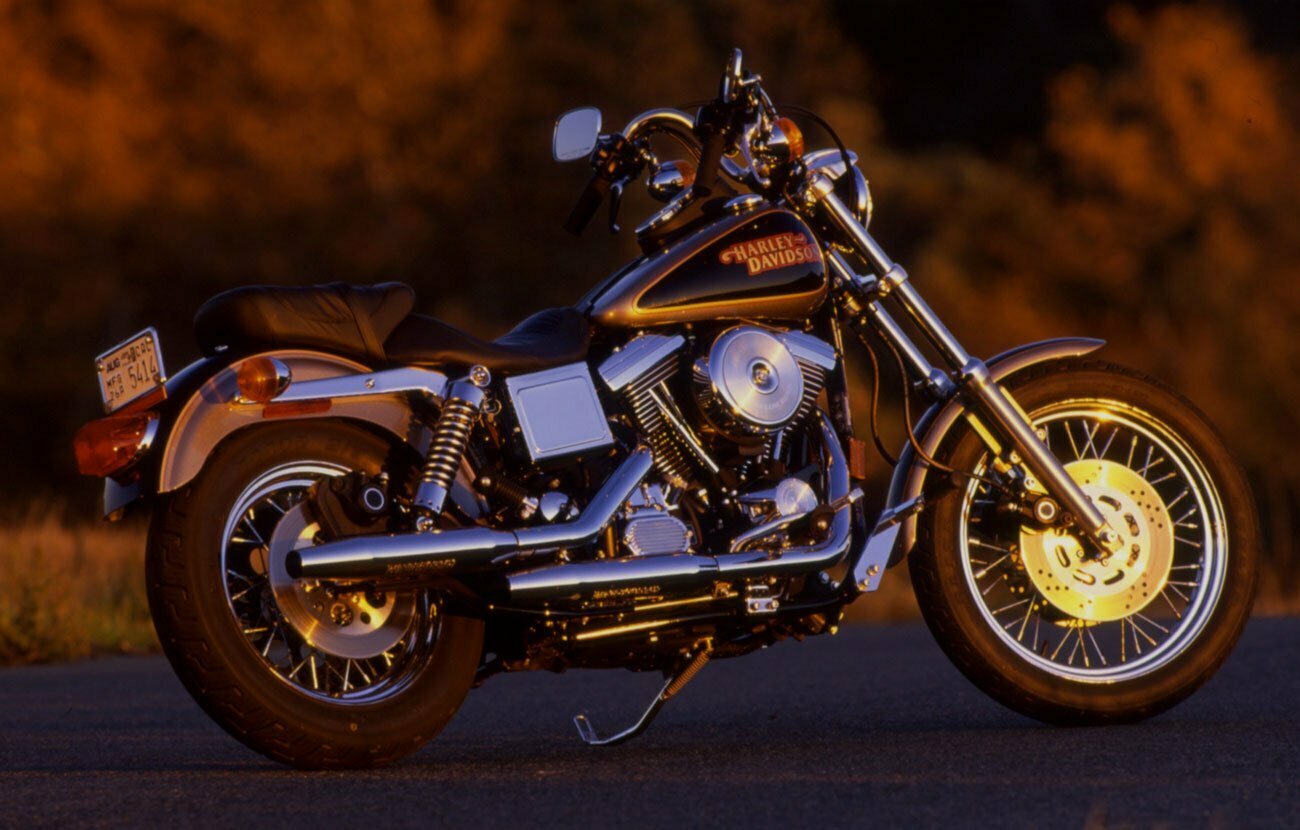 But that road held some strange turns. The more successful Harley be­came, the more important became bikes such as the Softails, machines that harked back to classic Harley values and appearances—even if it meant they vibrated a little bit. The Softail didn’t handle as well as an FXR, didn’t go quite as quickly, and didn’t stop as sharply. But, boy, did a Softail have character and char­is­ma, qualities that made them the best-selling of Big Twins.

So, when it came time to replace the FXR, Harley’s movers and shakers decided to take the new machine in two directions at once: to keep or im­prove the functional aspects of the FXR, all while making it look more like a classic four-speed Shovel. The key to that packaging was a backbone frame that didn’t wrap around the outside of the swingarm, and a new engine-mounting system. The FXR had used soft rubber mounts with tie-bars to keep the integrated engine/swingarm assembly aligned with the rest of the chassis—basically the same Uniplanar system still used on Buells and dressers. It can provide excellent chassis stiffness, but the soft mounts let the engine move around a lot, up to a full inch, necessitating a lot of space around the engine for clearance.

Willie G. and the boys in styling wanted a tighter, more compact look, so asked the engineers to hold engine movement to half an inch. The engineers responded with new, laminated steel-and-rubber mounts that support the front and back of the engine/ gearbox assembly. These mounts, similar to designs that have been used in helicopter vibration isolation, are directional: They allow movement in their plane, while resisting sideways motion. By using them, the engineers were able to simplify the frame structure, cutting the number of tie-bars to one at the top of the engine. Then, to improve handling, they rotated the engine backwards a couple of degrees, allowing the crank and its weight to be shifted forward; increasing the weight on the front wheel generally improves handling and stability.

Finally, while they were at it, they further simplified the Dyna frame, compared to the complex weldments required for the FXR. They did this by incorporating some steel investment-castings in the structure, such as the large and finely detailed one for the steering head, which simply plugs right into the frame’s downtubes and backbone.

When all was said and done, however, the conflicting design requirements of the Dyna concept ended up producing a Harley that presented the company with a few challenges. The first Dynas may have vibrated less than FXRs at a fast idle, but they were buzzier if you lugged them down into the 35- to 50-mph range in top gear. The engineers were sent scurrying to revise the stiffness of the rubber mounts for later years. And the seat height of the Dyna was relatively high, something that finally was tended to in 1996 with revisions to the frame that dropped the seat almost an inch. Like all Harleys, the Dyna has been refined over the years. The engine is unobtrusive and feels as if the bike disappears beneath you.

But even in 1997, the latest Low Rider is still sending some mixed messages. With the lower seat, you sit down into the bike, placing the main pegs high and close. The highway pegs stretch your legs out more comfortably, but the pullback handlebar rotates you backward, without the back support provided by the latest Softail seats. The flat bar on risers used by that first Dyna Sturgis offered a more comfortable riding position, and Softails today provide a lower, more-stretched-out and integrated cruising experience.

Not only that, those same Softails rumble and quake, staying right in your face while the FXDL almost disappears beneath you. The Low Rider works so well it vanishes like that wonderfully unobtrusive butler found these days only in period English fiction.

On the freeway at 75 mph, that smoothness, that unobtrusiveness, can really be appreciated; a Softail’s shaking gets real old after just a few hours at highway speed. And it’s hard to argue with the Low Rider’s double-disc front brake: Capable of stopping even the heaviest dresser, it’s perhaps the most powerful ever fitted to a Big Twin, and hauls the Dyna down hard with just a light squeeze. The Dyna’s four inches of rear-wheel travel provide a ride over sharply creased asphalt that would hammer the rider of a Softail. The 5.1 inches of front-wheel trail and 32 degrees of head rake slow down the Low Rider’s steering, but also make it commendably stable; it’s a bike that takes a bulldog’s hold on its line or its heading.

In the end, the Low Rider asks you to decide what you value most. If it is ultimate character or tradition or charisma, this is probably not the Big Twin for you. And it’s obviously not the touring machine that a Road King is, or even as good at that task as a Dyna Convertible. Instead, the Low Rider offers simple and classic Harley-Davidson appearance, along with the slickest operation you’ll find in any Big Twin cruiser.

So, if what you want is The Look without The Pain, if you crave functional compromise instead of single-minded style, listen closely here: The FXDL Low Rider is talking your language.

‹ A Dark Horse Under The Gun › The Victory Hellcat Job

The Wi-Fi Combo Kit enables remote control, live preview and playback on smartphones and tablets*, live streaming* to the web, […]

2007 CDS Cowboy Chopper Photos: Hollie Lytle, Lytle Foto This bike has real history for me. When I was a […]

Don’t get me wrong. I love full-blown custom paint. Probably more so than the next guy. By Rob Fortier, Photography […]