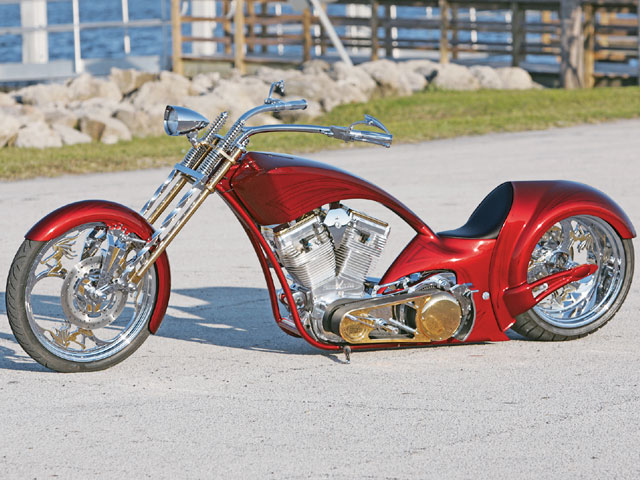 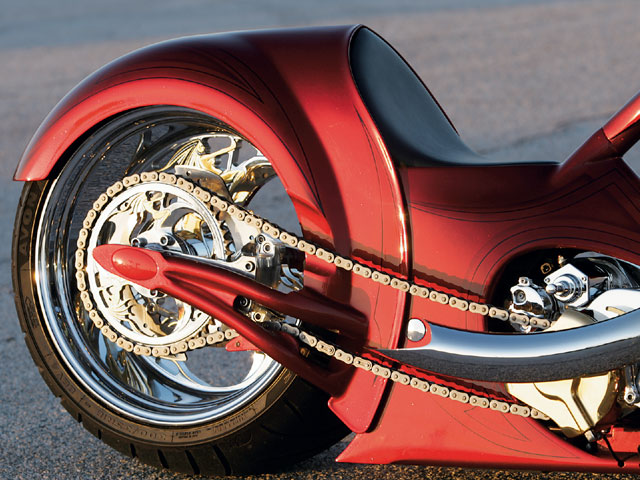 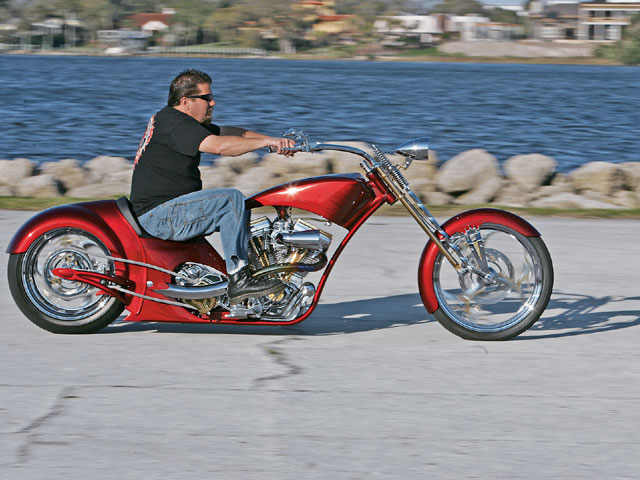 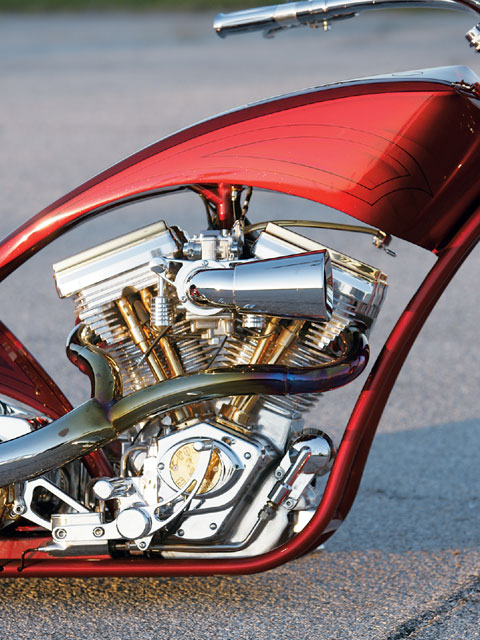 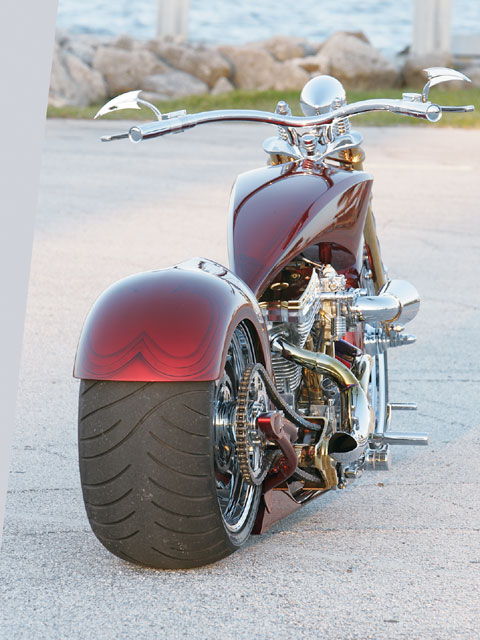 It’s like looking at a ferrari; the bodywork just swoops from end to end. 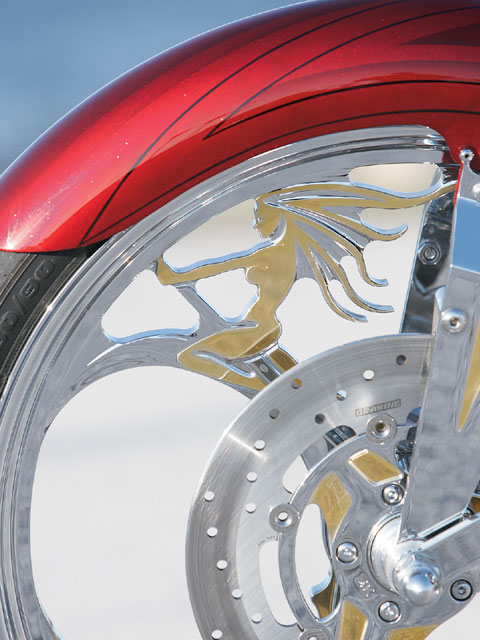 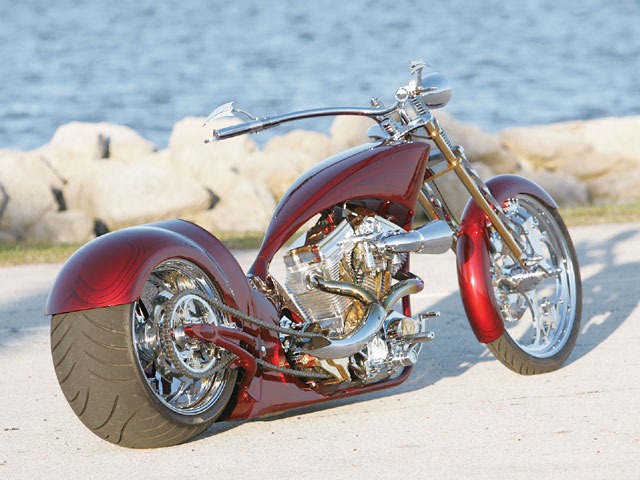 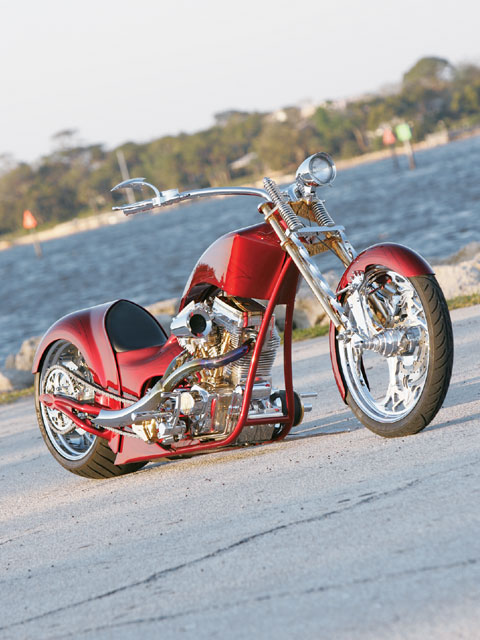 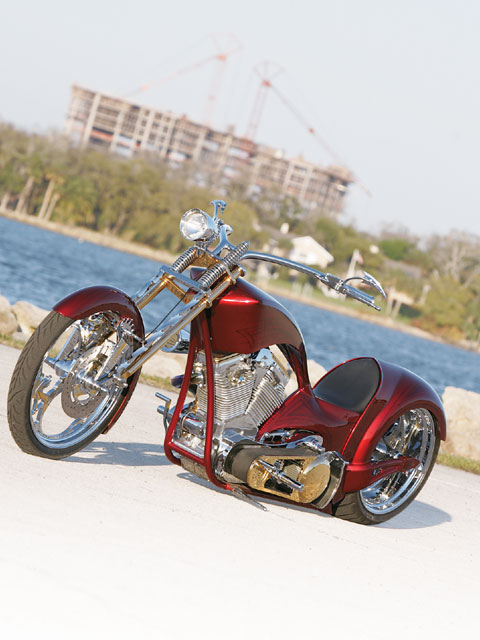 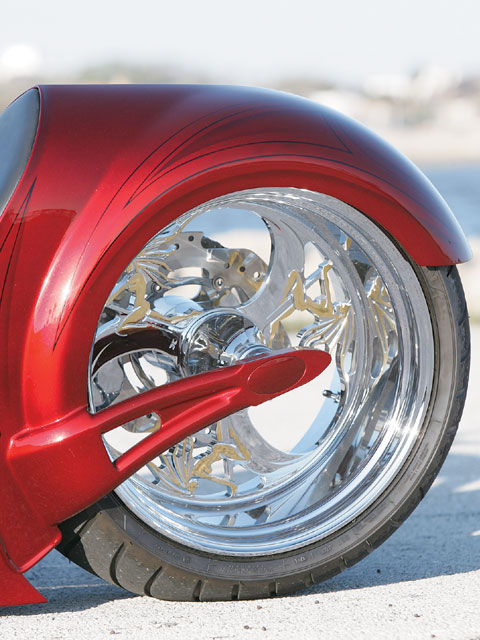 Inspiration for a build can come from any number of places: A cool frame design, a radical idea for a gas tank, a hot rod, almost anything. The Red Xtreme Machine exemplifies what can happen with a little inspiration.

The crew at Xtreme Machine doesn’t get too many chances to build custom bikes, but every once in a while they decide they need to build a bike to showcase a product, and that’s the case with the Red Xtreme Machine. They were pretty excited about the new Venus wheels they had just machined, so they went into action and started coming up with ideas.

Rod Brogdon’s got some experience when it comes to design and fabrication. He began his career in 1987 working for Boyd Coddington of Boyd’s Wheels in California. In 2000 he moved to Illinois to form Xtreme Machine with Rick Rolson, Rob Rodems, Jeff Rodems, and Donna Carmody to focus on motorcycle wheels, an endeavor that has blossomed into one of the top wheel manufacturers in the industry.

The Venus wheels have silhouettes of naked girls pole dancing, and the Xtreme crew wanted to build a bike that went along with the theme, so it was going to have to be a long, low, and sexy chopper with lots of bling. Jesse Jurrens at Legend had just come out with the perfect frame, the Independent Lowlife with 40 degrees of rake. It was long and low, different from everything else Rod had seen lately, and just the right platform for the build. He fit it with some handlebars and an oil tank from Independent, fabricated a set of triple trees, and mounted a twisted Springer from Denver’s Choppers.

The brakes had to match the wheels perfectly. They wanted to hide the front caliper behind the fender bracket, so they custom-built a caliper for the front and fabricated rotors for the front and rear. For the rear they decided on an HHI caliper. For the drivetrain they picked up a Mid-USA 114ci motor and a Mikuni carb. To get the extra bling they were looking for, they sent the motor out to Diamond Heads for its signature finish. To get power to the wheels, they used a Baker six-speed transmission and a primary from Independent.

The team had a couple of fenders from Fat Katz they were planning on using, and fabricated custom fender brackets with crown shapes to top them off. They knew they wanted to use Legend Air Ride suspension in the rear, but wanted to come up with something cool, and wanted the bike to look like a rigid.

They began by mounting the fender to the swingarm and fabricating a skirt to hide the Air Ride pivot, so it would be impossible to tell if the bike had suspension. They then realized it would look cool if they put the seat down in a cavity that would rise and fall with the suspension. Instead of having a seat mounted to the fender, it’s mounted to the frame. Now when the Air Ride is engaged, the seat rises up from its cavity, but when the suspension is disengaged, the seat sinks back down.

At the time it seemed like everyone was using forward controls on builds, and the guys had to be different, not to mention the fact that most were too short to reach forward controls, so they threw on some mid controls and called it good.

For the finishing touches and to really make the bike stand out, they decided to gold plate the triple trees, primary, pushrod covers, and rocker boxes, and sent the rest out to Ernie Ball for a smooth candy red finish.

Rod and the Xtreme crew were pretty happy with the results. Their inspiration took them in a new direction and allowed them to create an original one-off bike. They brought the bike down to Myrtle Beach for the rally to showcase the Venus wheels, and Bo Puckett from North Carolina stopped by and decided he had to have it.

The Xtreme Machine crew will probably build another bike in the future, but have no plans to do so yet. They will most likely end up waiting for some kind of inspiration.

If you had the opportunity to own the bike of your dreams what would it be, a factory built Harley-Davidson […]

The Breakfast Club, Sturgis-style. Courtesy of the Buffalo Chip Custom motorcycle enthusiasts have a rare opportunity to join renowned U.S. […]