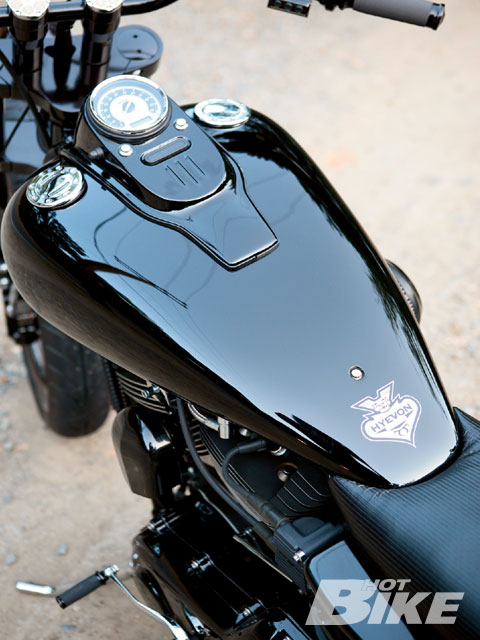 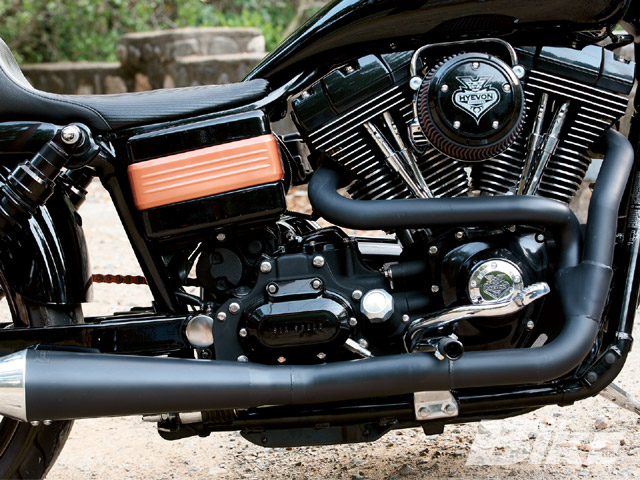 At first glance, you would never know this is 117ci sleeper motor. 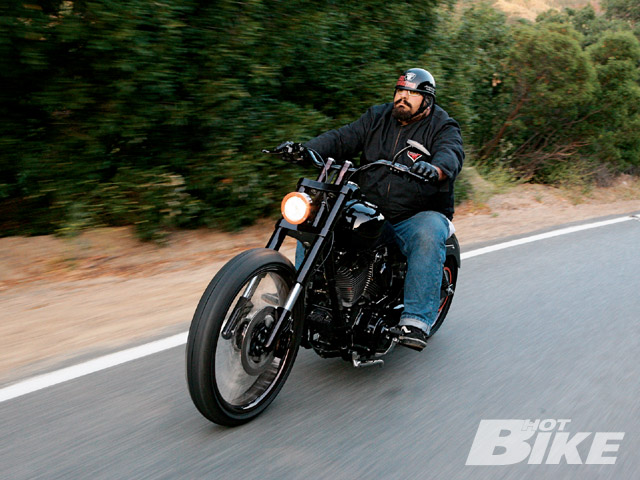 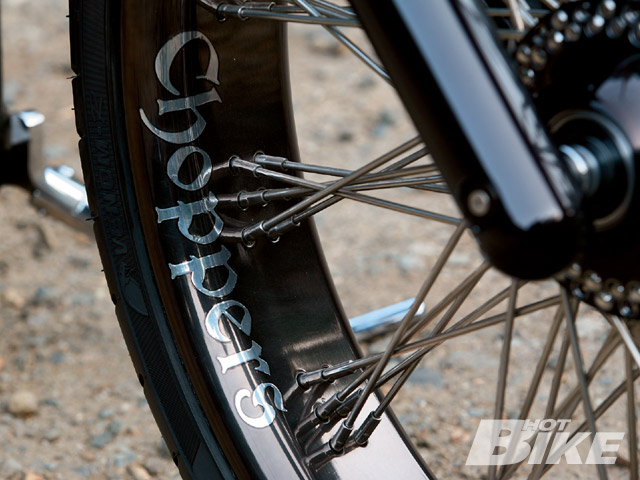 A closer look at how the one-off rim band was drilled to get the spokes in this cluster pattern. 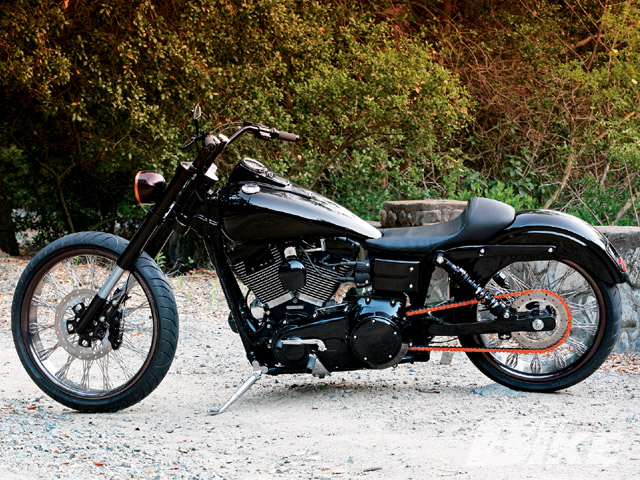 One of the beautiful advantages of Harley ownership is the never-ending possibilities available to today’s bike owners for customization in both style and comfort. Truthfully, it doesn’t matter what direction, style, shape, color, or flavor one seeks, it is possible to build whatever bike one’s imagination can conjure up. Take this sleek Street Bob built by Hyevon Choppers located in Whittier, California, for example. Hyevon has been customizing stock Harleys into rolling masterpieces since 2000. Having 18 years experience between the crew shows in the craftsmanship displayed on every bike that has rolled out of Hyevon’s shop. When the inquiry into this bike began, the guys replied with a rather simple explanation befitting men of purpose who rarely mince words.

“Having two baggers as company bikes already, we needed a bike that was another breed; so we chose the Dyna Street Bob to be the shop hot-rod bike. Who knew a Dyna in the West Coast would be a popular bike? So we took the Dyna home from the local H-D dealership and tore it down in about 2 1/2 hours to the bare frame.”

Having seen many stock H-D frames, it is obvious the amount of work performed to finesse this bike into the slick street rod laid out before you. Sporting the blacked-out look and svelte lines of a panther, this bike doesn’t roll down the street as much as it roars into it. The Hyevon crew wanted this bike to have big wheels and a stretched-out look, so they sent the frame to Dr. Johns and he raked the neck 5 degrees. Then in-house Hyevon stretched the swingarm 2 inches so they could stuff a 10-inch wheel on back, and then they notched the swingarm for an Exile Sprotor. After slamming the 20×6.25 in the rear and a 23×4 in the front, the bike felt like an Indy car at the Grand Prix.

The silhouette provided by this baby slapping against the landscape screams, “Get outta my way F-A-S-T.” The motor was torn down and the cases were bored and stroked. The Hyevon crew used SE 103 flywheels and an Axtell 117ci Mountain Motor setup. According to the shop, “This bike is such a thrill to ride; you just keep riding to the next bar.”

The reason for the stretched swingarm and radically raked frame was to keep this pony from bucking the rider off the backside. It seems the 117-inch mill coupled with the Zipper’s fuel injection system made for a pretty radical ride that wanted to stay in a vertical position. After the extensive stretch and massage therapy, this bike rides straight as an arrow and just as true.

Take a moment and let your eyes pour over the blackened detail of every nut and bolt. From the inverted frontend to the stretched and slammed rear, every aspect of this bike was pre-meditated with speed and style in mind. The front wheel’s 23-inch rim is coupled by a 20-inch in the rear. The cluster-laced-style spokes help the large-diameter wheels catch your attention, but what’s even more unique is their arrangement. Hyevon had HDW Wheels set the spokes up in a cluster pattern almost recreating the pattern of the old hot-rod-style Cragar wheels. You will hardly believe they stuffed 75 spokes in each rim.

The paint looks as if it was slathered on in layers and then hardened in a furnace, almost making this beast into a modern weapon. Hyevon is known for creating some of the sickest rides available today. Luckily, for the average Joe reading this magazine, Hyevon can do anything you desire, from ground up rides to customizing your stock bike, to service. Hyevon Choppers does it all.

‹ Andrews Explains the Camshaft › Beaming In On Lefty Brothers Cycles

On the Cover: Michael Mancini catches Meghan Williams aboard the military-themed Thug Couture bike. ON THIS PAGE The one and […]

Motorcycles As Art In The “Old Iron Young Blood” Show

World-famous motorcycle photographer Michael Lichter has curated motorcycle exhibits for 17 years. Choosing a new theme on which to base […]