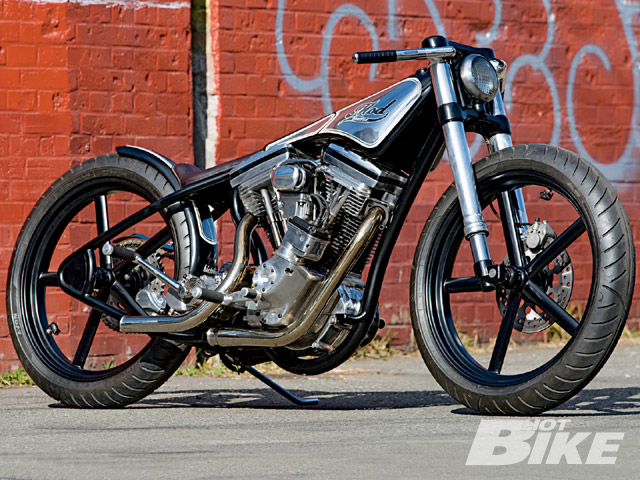 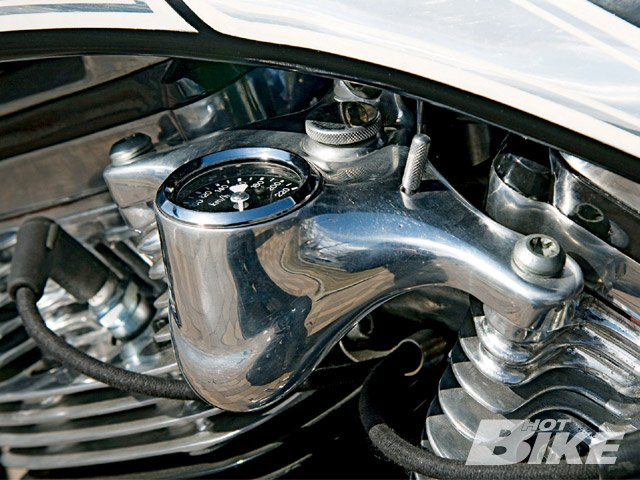 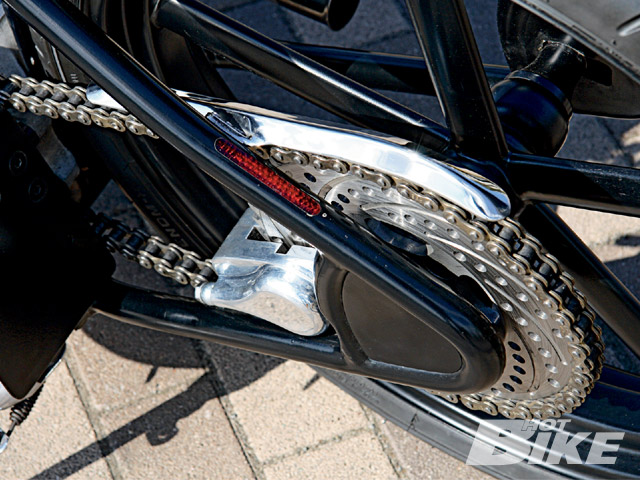 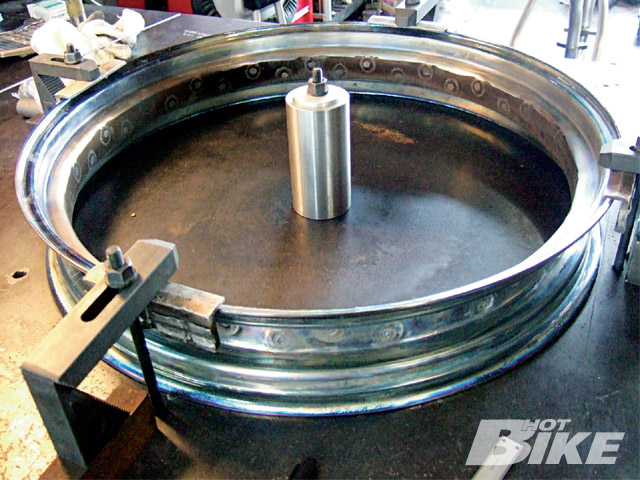 The custom five-spoke wheels started out as a hoop and a billet hub. Then Hideya welded in the oval-shaped spokes. 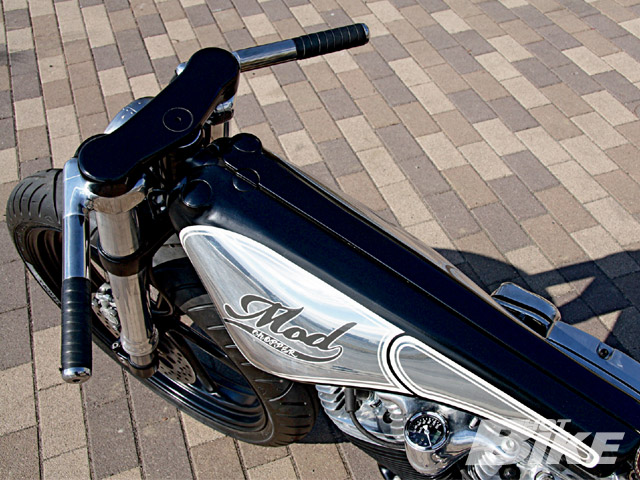 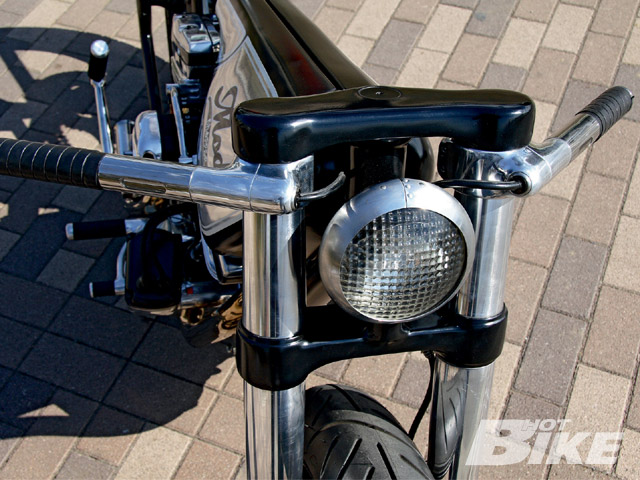 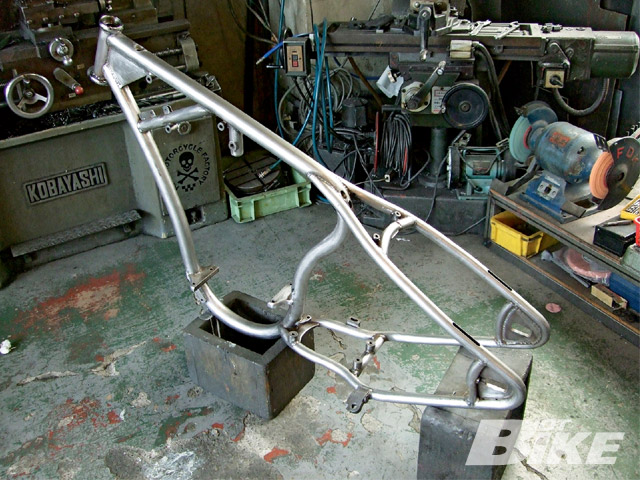 Here is the frame finished and ready for work. You can see the cutouts in the top of the rear tubes for the flush-mount taillights. 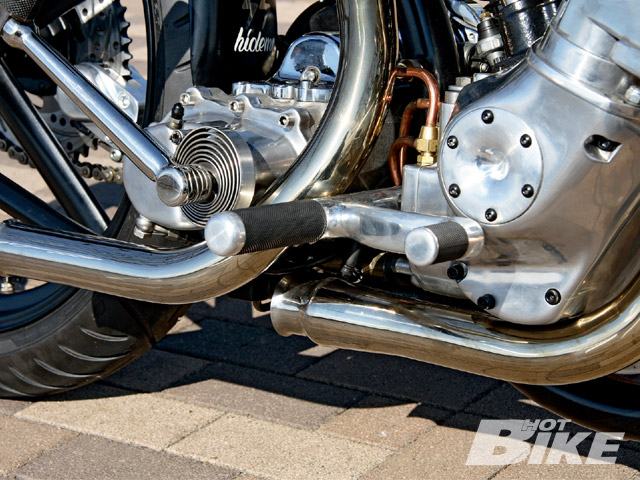 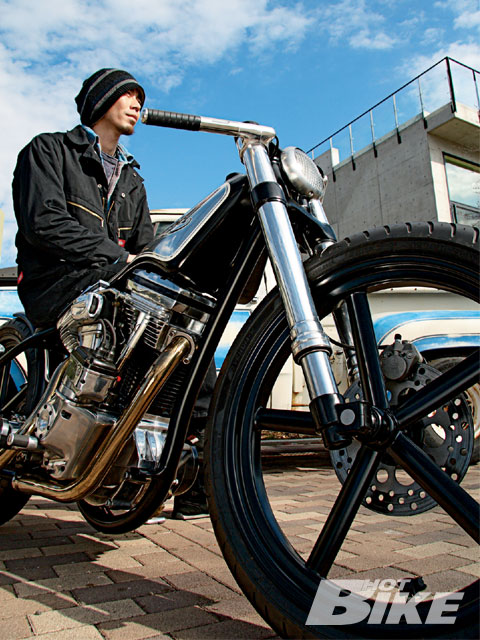 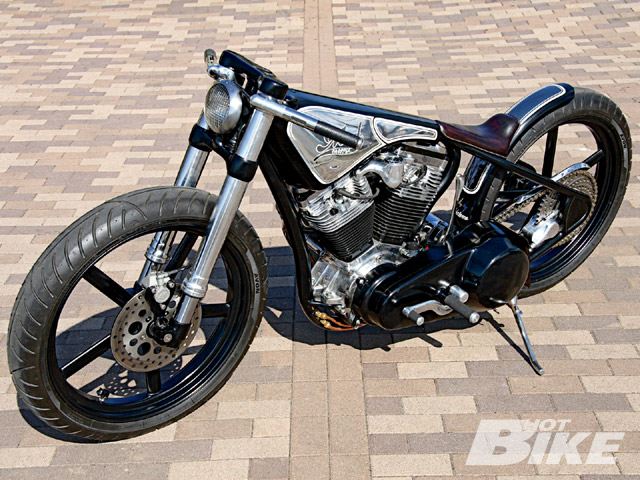 To save room, Hideya used the downtube as the oil tank and made custom oil lines.

The phrase ‘good things come in small packages’ is often true, but has been done to death and is painfully unoriginal. In fact I had to cringe a little as my fingers typed it. It’s the kind of thing your mom says when you complain that the Christmas present your uncle gave you fits in one hand. Nevertheless, from the small package that is Hide Motorcycles Japan has become a very good thing indeed. Three good things actually. Mod Chopper 3 is the third in a series of bikes created by custom motorcycle builder, Hideya Togashi. He built this from his deceptively small, multi-level workshop, which boasts a beautiful view out over the vast Tamagawa floodplain, west of Tokyo.

With only his wife and graphic designer Wakako, and his mechanic, Mitsugu, Hideya spends most days fixing and modifying Harleys. When he’s not fixing bikes, Hideya’s building custom bikes from scratch for customers in Japan and abroad. Mod Chopper 3 was essentially born from the success of the earlier bikes. It was commissioned by a wealthy Italian Harley dealer, who as it happened is also the owner of No. 2. The ‘Mod’ influence for the project comes from the ’50s-’60s English subculture of modernist fashion and lifestyle. For the bike this meant a theme of classic design elements, clean lines, and a fashionable look.

Hideya began the build with only these concepts and a blank mental canvas. He tells us he liked to do much of the design as he went, facilitating changes and ideas on the go. The basic frame took two weeks to build, then came the wheels. This is something he’s quite proud of and is something that hadn’t gone unnoticed. At the 2007 Yokohama Hot Rod Custom show, the trophy winning bike and its rolling stock caused quite a stir. “People were coming up to us, both industry types and show goers commenting on the wheels; they were really impressed,” Hideya said.

In an industry where the preference is for expensive one-piece billet wheels, Mod Chopper 3 stood out for the hand-crafted elements. Each of the 21-inch wheels was built from steel, beginning with a blank outer rim. It was then spot welded and ground down before the five oval-shaped spokes were added. The center is billet steel specially crafted on the lathe, reminiscent of an antique table leg. It’s largely hidden now, but continues the theme of attention to detail that is present in this machine. Braking is care of AJP and OMP at the front and back respectively, with the rear disc doubling as the drive sprocket. The front suspension uses the forks from a Honda CRM and springs built to a stiff setting.

Once the rolling chassis was complete, Hideya could step back and plot the rest of the bike. A 1985 Harley Evolution engine was purchased off a customer of the shop and then stripped down and rebuilt. Mechanically it’s all standard, but considering the bike’s light weight and simplicity, there are no issues with a lack of power or acceleration. It was installed on a custom cast aluminum engine mount and is mated to a Revtech 4-speed transmission. The oil is stored in the frame and hard copper lines are used to distribute it.

With the main hardware set in place, Hideya set about on the details. One of the most fascinating aspects of the bike is the layout of the front handlebars. With no levers in sight, it may surprise you to learn that the front brake is controlled by twisting the left handlebar. The hydraulics for braking are all the same and everything is neatly tucked out of sight above the engine. Also well hidden is the rear brake light and indicators, which have been subtly integrated into the frame and rear fender. The wiring is threaded through the frame and is kept out of sight. In fact, virtually all of the ancillary components, such as the brake lever and footpegs were painstakingly built from scratch in a way that Hideya felt complemented the bike’s overall look.

The seat was also designed and built in house, although it was wrapped in dark-brown leather and padded by a nearby upholsterer.

The finishing touch to the build was the fuel tank. Constructed from three pieces of stainless steel, the tank was hammered to the desired shape and mounted to complement the bike’s flowing lines. The tank’s artwork was then created on a computer and a printout was used to determine its placement and the final look.

Once decided, Wakako painted the final design and finished it off with cream pinstriping.

The full-time build took Hideya the best part of two months and, as with most good things, you blink and it’s over. After a last fun filled, high-speed test ride, the bike was boxed and wrapped then put on a plane bound for Italy.

As far as packages go, there’s no denying that Mod Chopper 3 is certainly a good one.

Nick Pucci sought out longtime friend Tyler Foster, owner of Sikpipes, for the complete makeover of his recently purchased Softail. […]